My Epiphyllum oxypetalum or Queen of the Night Is Blooming! 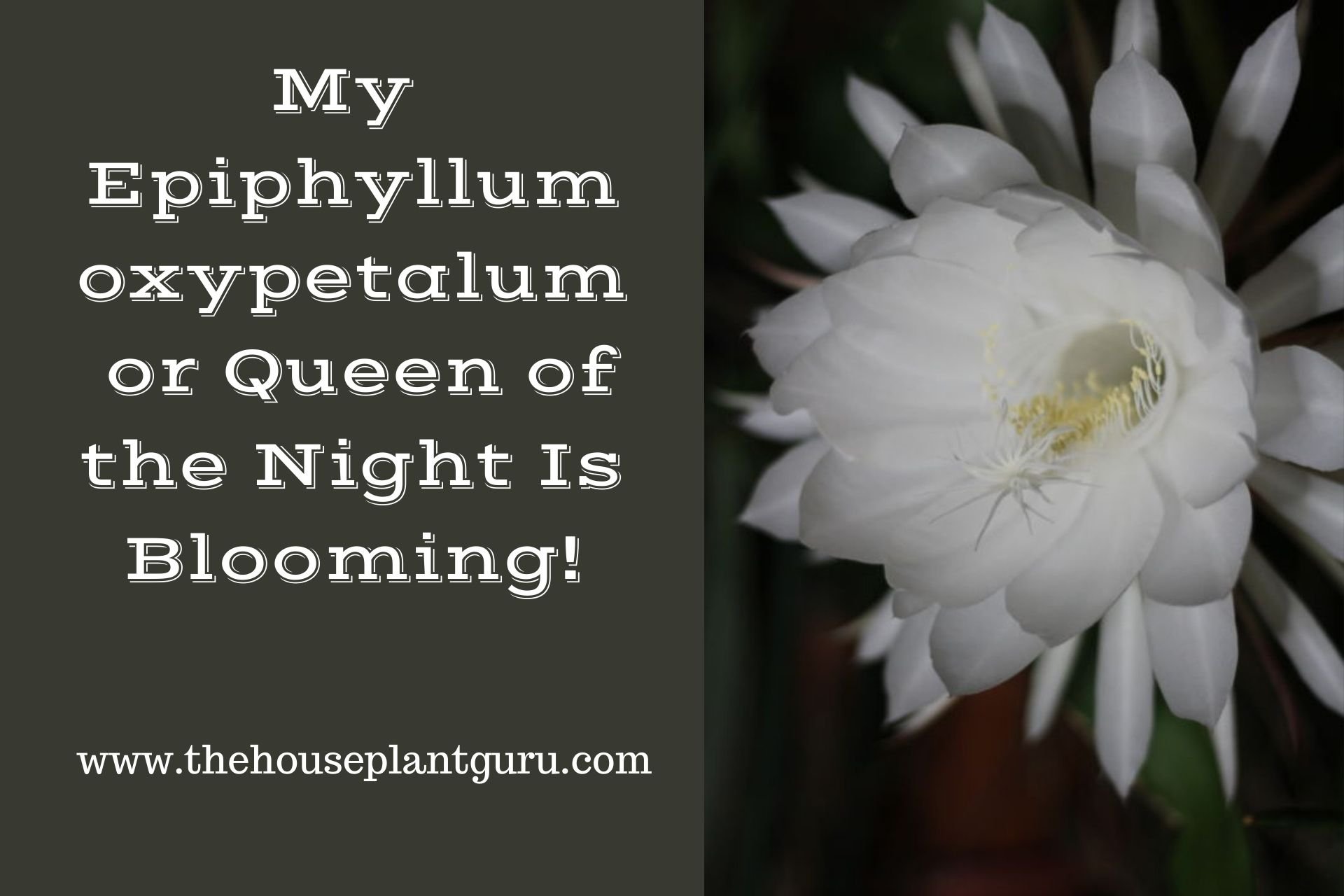 I was given my Epiphyllum oxypetalum or Queen of the Night cactus many years ago when my friend moved to another state. It limped along for a while in my living room and then I moved it to the sunroom. I’ve had it for years and I finally saw it bloom for the first time and I was so excited! It is a beautiful night-blooming cactus and it smells like heaven! I didn’t invite anyone over to watch it open, but many people do. Maybe next time. 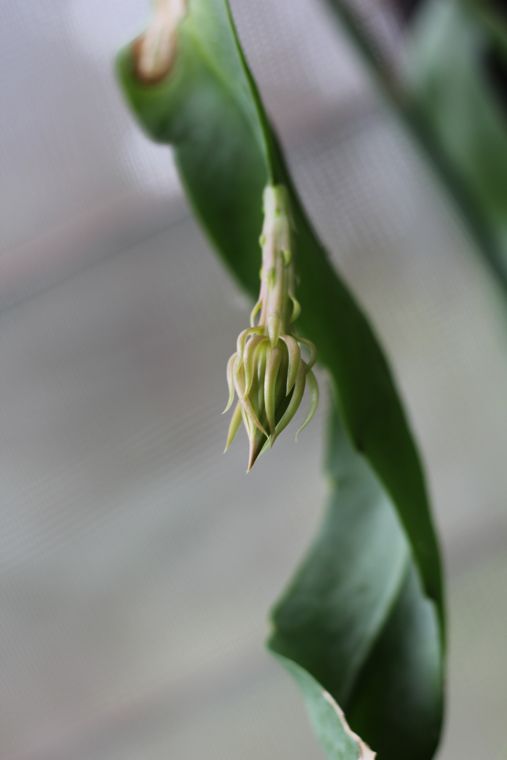 I noticed the bud on May 24 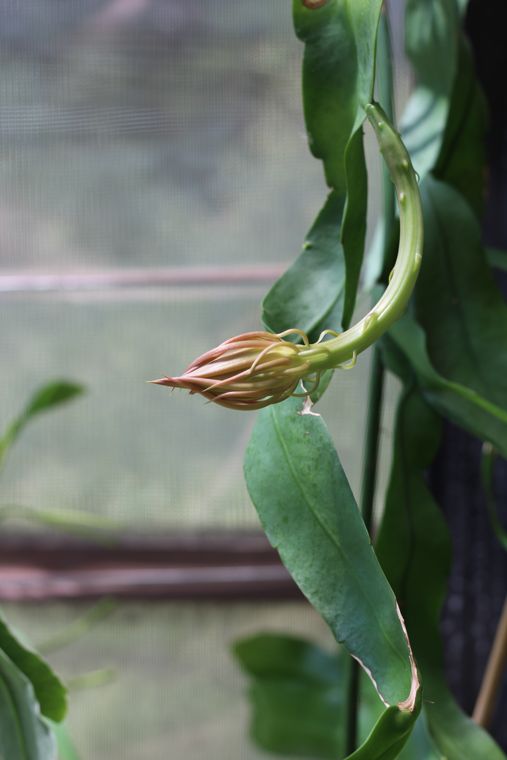 May 30 the bud is lengthening and starting to curve up 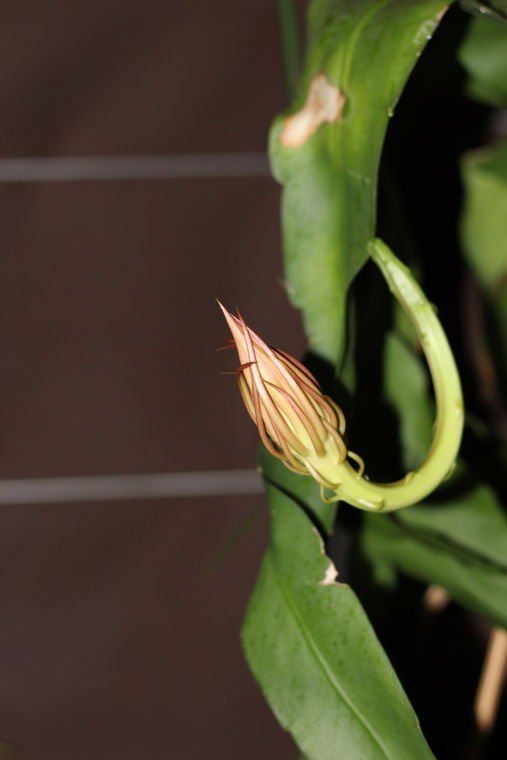 May 31 It is curving up and getting ready to bloom

I kept checking on it every day. The bud started out pointing down towards the floor and as it got closer to bloom time, it started curving upwards. I’m sure it does that so the flower can be facing upwards when its pollinators come to visit. This plant needs to be pollinated to produce its fruit so it won’t be producing fruit in your home. When the white started showing, it knew it would flower that night and it did. 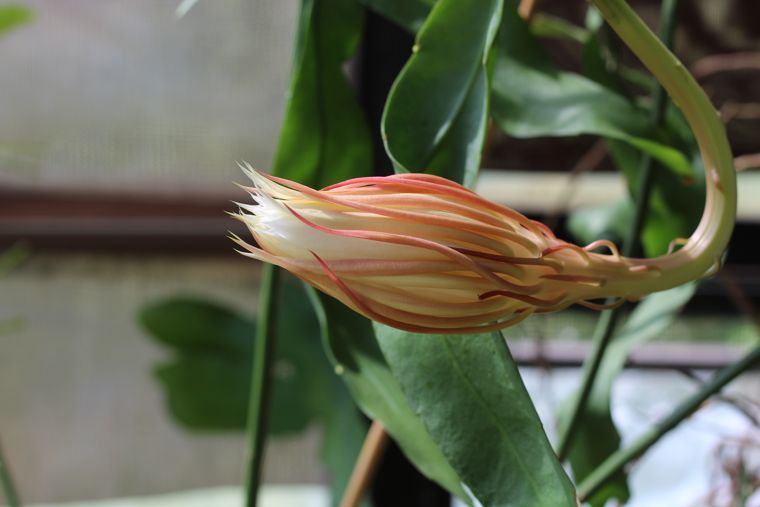 June 3 – I know it will open tonight. This picture was taken before sunset so it wasn’t open yet.

As soon as it started getting dark, it started to open and I wish I had done a time-lapse of it, but maybe next time. There is one more flower bud developing. 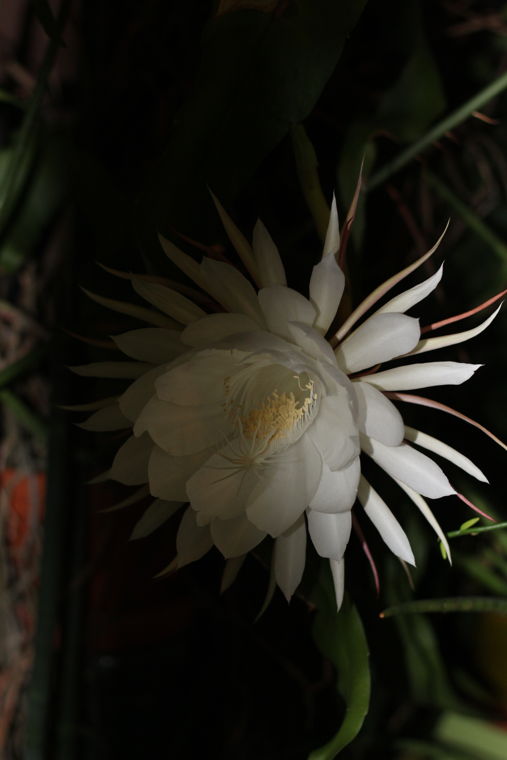 What is pollinating this flower?

So why does this flower open at night? There surely aren’t any bees hanging around to pollinate it after dark. Because they open at night, the pollinator must be active at night, right?. What is active at night that could pollinate the flowers? Creatures that come out at night include moths, but also bats. Yes, bats are one of the pollinators of these flowers and then they remember where the flowers were because they know they will find their red, juicy fruit there later. These plants are naturally found in Mexico and parts of South America. I found an article that cited that it was discovered by Augustin Pyramus de Candolle, a Swiss botanist, in 1828, but not sure that is a fact. 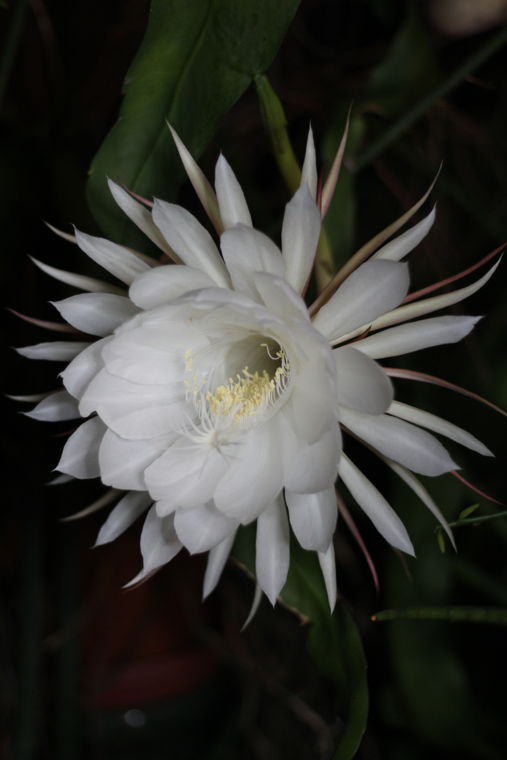 Look at this beautiful flower 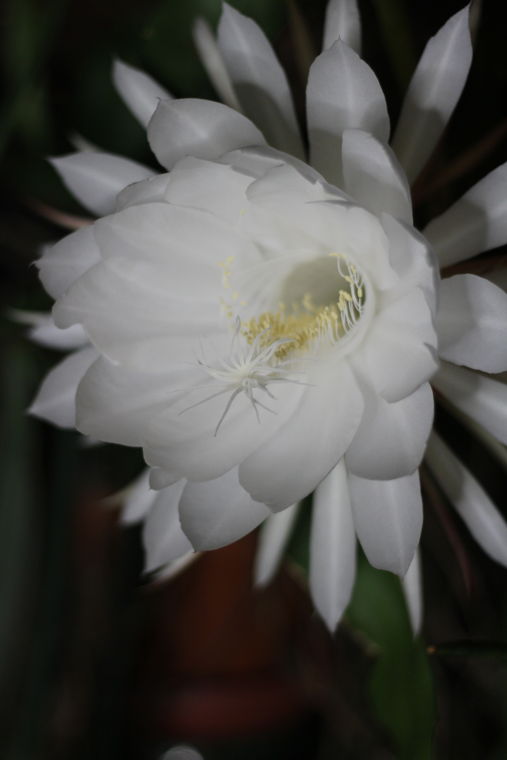 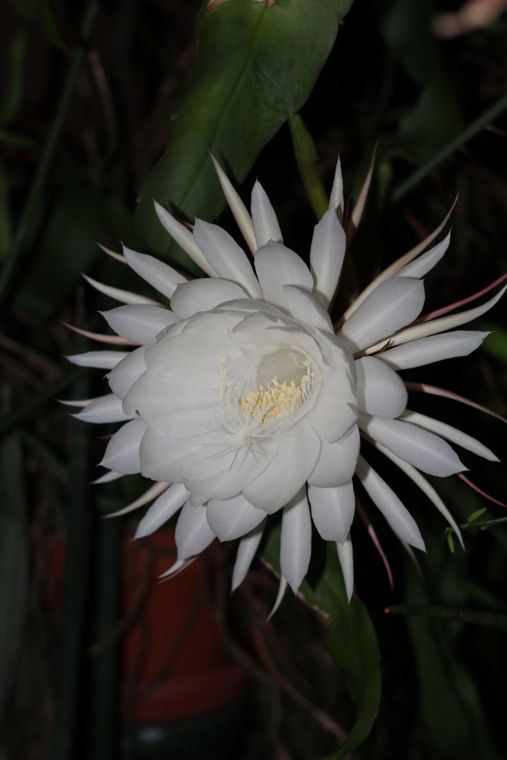 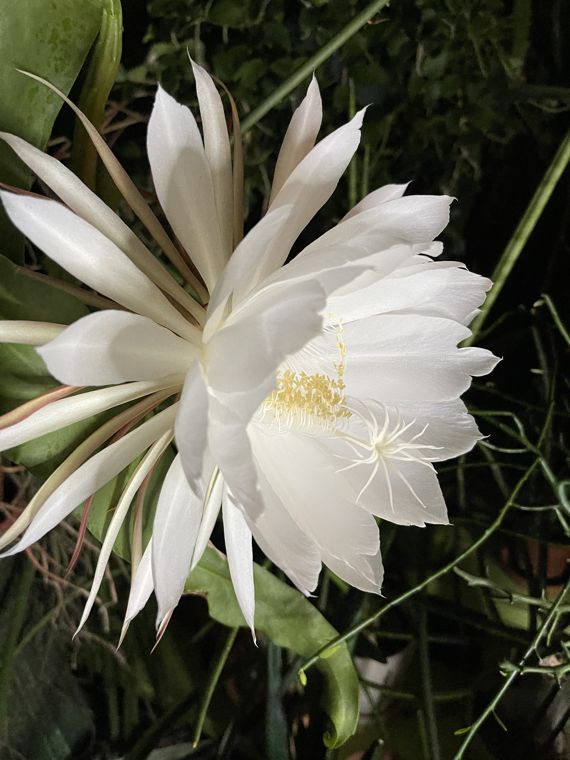 It was so beautiful while it lasted!

Where to Place Your Plant

Because this plant scrambles up and through other plants in its natural habitat, I grow mine in a large container and have a couple of bamboo stakes to hold it up. It did attempt to grow up into the shade cloths of my sunroom, but I took it down. I moved it to a brighter area and it loves it, producing two blooms this year. It had one last year, but I missed it as it was behind the plant stand and I found the dried-up flower later. I was bummed, to say the least. Though it is an understory plant in the jungle, it does climb up other plants toward the light. I think a west or south window would work fine in your home to encourage blooms. 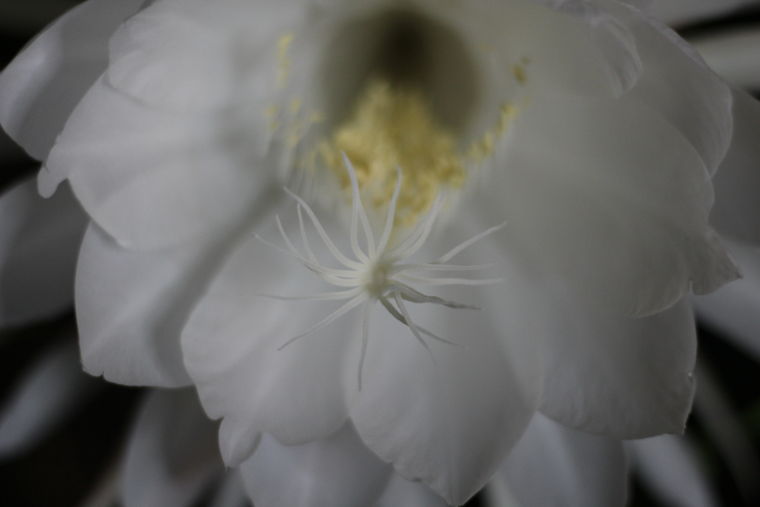 Love the center of the flower

How it attracts pollinators

Not only is it beautiful, but the flower also smells good. It needs to make sure it attracts as many pollinators as it can in the short time it blooms. Flowers are all about getting pollinated and making more of themselves by developing seeds and by any way needed to ensure it gets done. It also helps to be white because it practically glows in the dark. So if the pollinators don’t see it glowing in the dark as they fly by, the smell should lure them in to check it out. 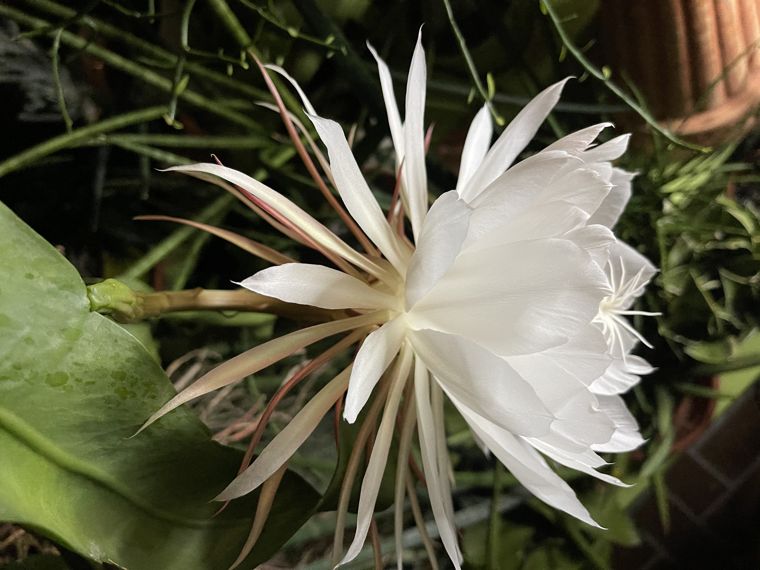 From the top of the flower

I’m not sure why it took so long to bloom, but I suspect it didn’t have enough light. Many blooming plants prefer to be snug in their pot to bloom, as well. It is in quite a large pot and may have needed to fill the pot with roots. Usually, a cold period helps, too. My plant is in the corner of my sunroom away from the space heater so I think it probably gets a bit chilly in the winter. Because of the temperature, I don’t give it much water then, either. So when it warms up in the spring and I give it more water, it is triggered to bloom.

By the next morning, it had closed and deflated like a popped balloon. I can’t wait until it blooms again! 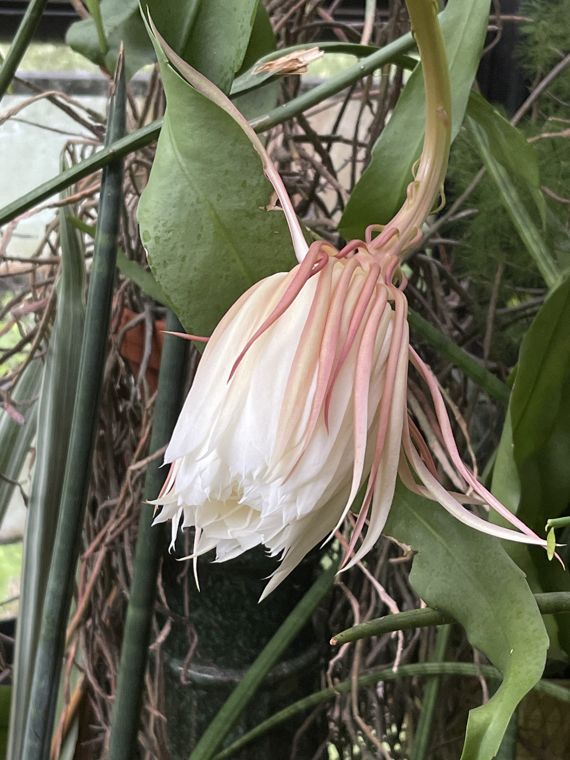 The next morning the flower is done

Do you have a night-blooming cactus? Has it bloomed for you? Did you have a flower party with friends? Let me know in the comments.

It was so beautiful while it lasted!