Why Do Plant Companies Put Glued Rocks on Top of Plants? 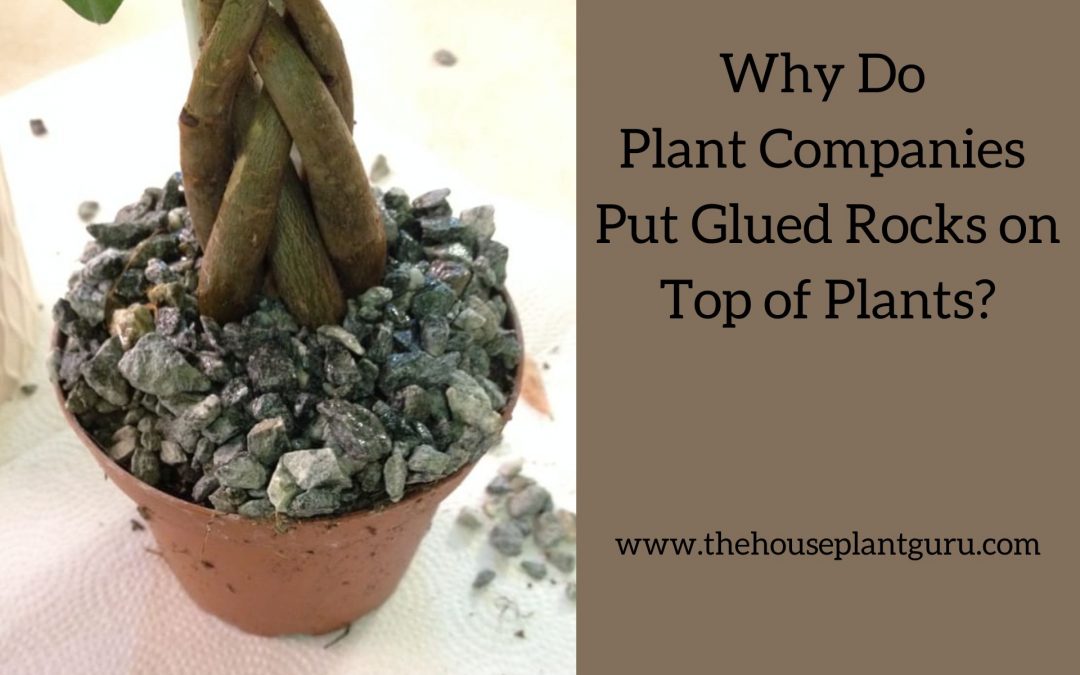 How many of you have bought plants that have pebbles glued on top of the soil? It’s kind of annoying, to say the least. Why do plant companies put glued rocks on top of the plants, anyway?  It is done for ease of shipping so the soil stays put, and the plant stays upright. To add insult to injury, the containers don’t always have a drainage hole so there isn’t any water leakage during shipping. I recently bought a Pachira or money tree as it was 1/2 off -I couldn’t pass it up even though it had the glued rocks and no drainage hole. I knew I could fix it. 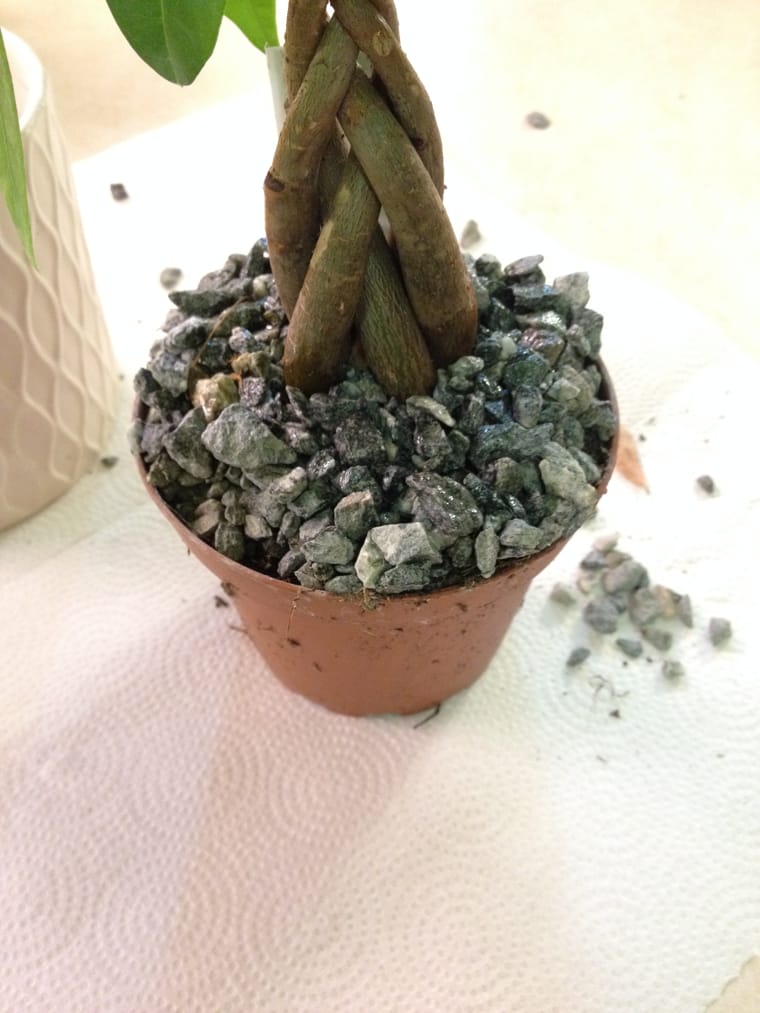 Rocks on the plant and rim of pot 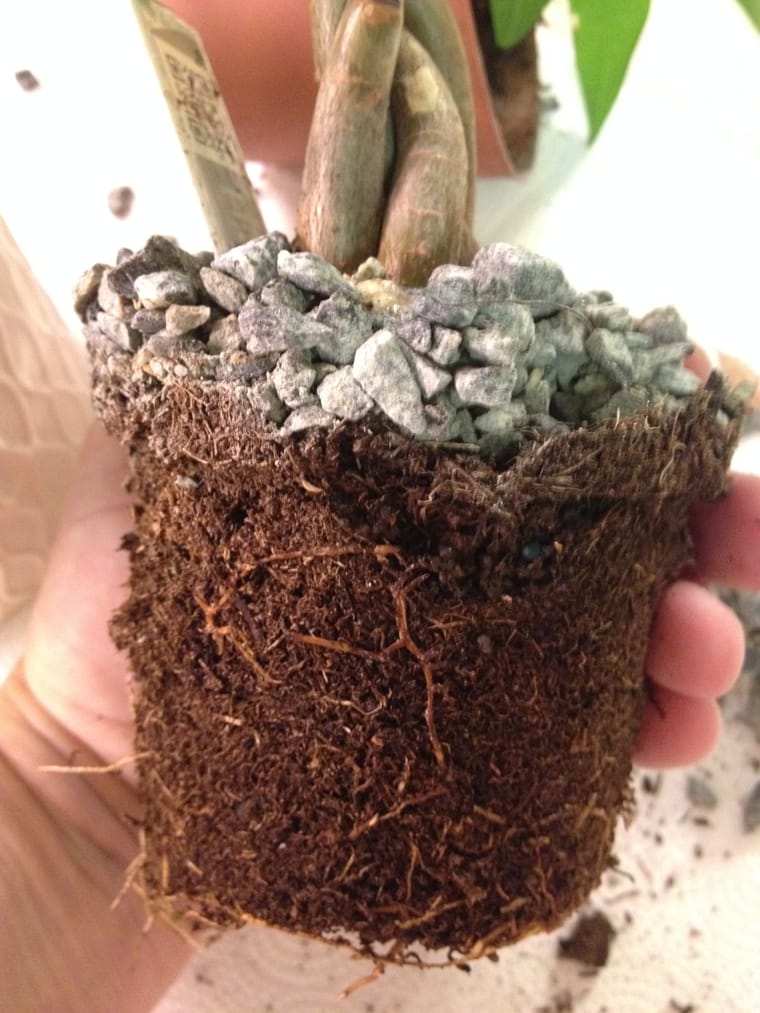 The question is how would you know your plant needs water? You certainly can’t stick your finger in the soil to check for the plant’s water needs. Or how would you know if it has too much? You can’t look inside the pot and there won’t be any water running out the drainage hole, as there isn’t one.

So, where to begin? First, I chiseled the plant out of its pot. Using a knife I carefully pried the pot away from the glued rocks so I could get the plant out. As you can see above, the stones are still intact on top of the root ball and around the stem. This was a plastic pot contained in a cachepot. If the plant is potted directly into a ceramic pot, be extremely careful when trying to pry it out as the pot could easily break. (I speak from experience.) 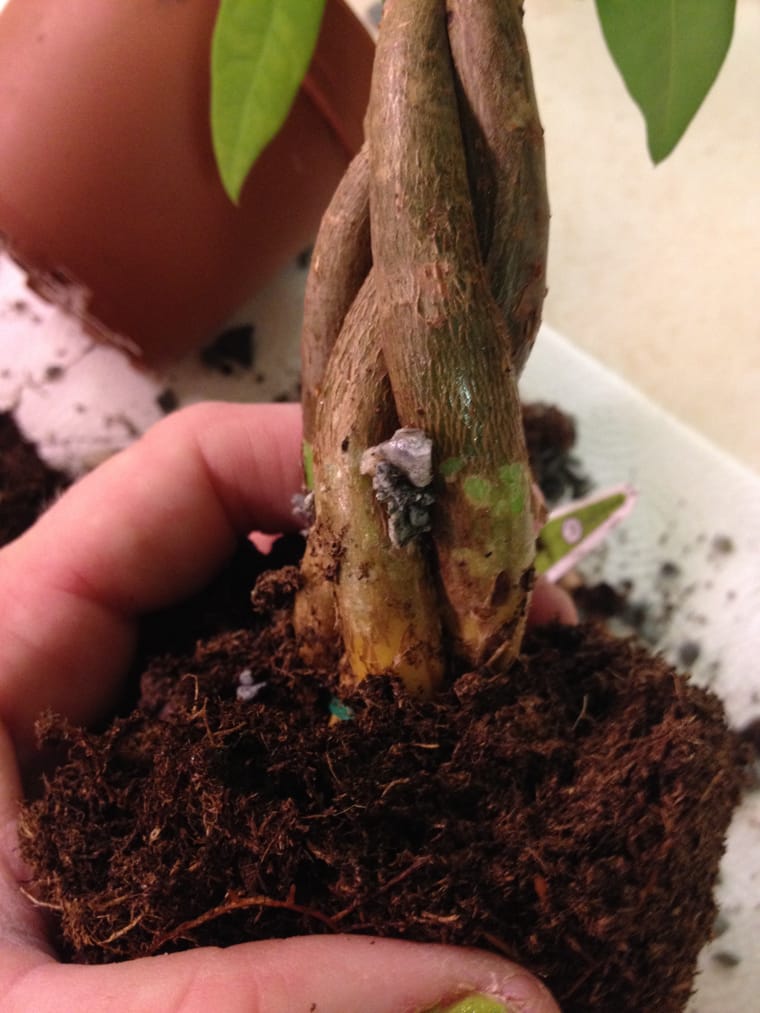 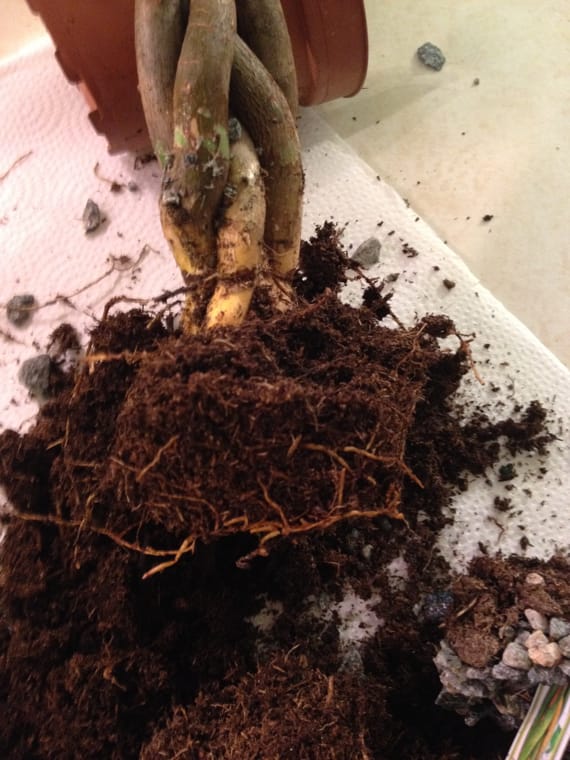 It has a good root system

Second, I pulled the glued stones from around the stem. This involved a bit of strength and I was as careful as I could be, but as you can see in the above picture some of the bark of the Pachira tree came away from the stem with the glue. 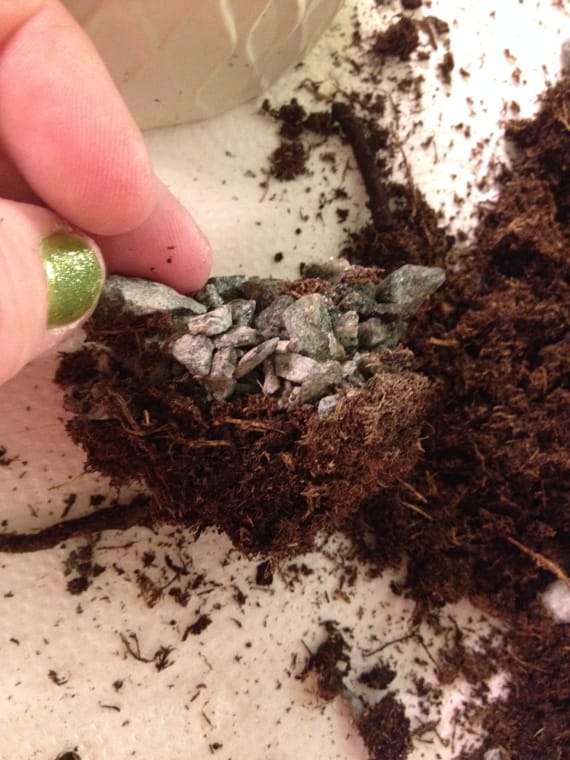 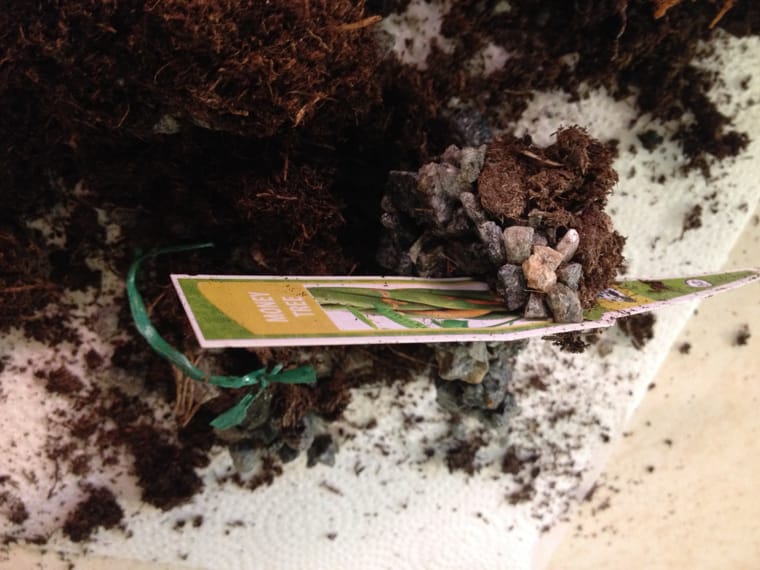 Even the tag was stuck in the rocks

More Problems Under the Rocks

After removing the stones, I realized how much soil was up around the stems.  After removing the superfluous soil, I then found a tie around the stems. When they braid the stems of the tiny plants together, they need to be tied to stay and grow that way. I understand that may be necessary, but as you can see in the pictures below, the tie was cutting into the stem. I’m not sure how long it would have been before this tie girdled the tree and killed it. Would we think the plant just died, or think we had done something wrong? Probably. When all along, it was being slowly strangled. Had I not removed the rocks and the soil that were too high on the stems, I would never have know the tie was there, slowly killing my plant. After I removed the rocks and soil and cut the tie, I think I heard the plant give a sigh of relief. 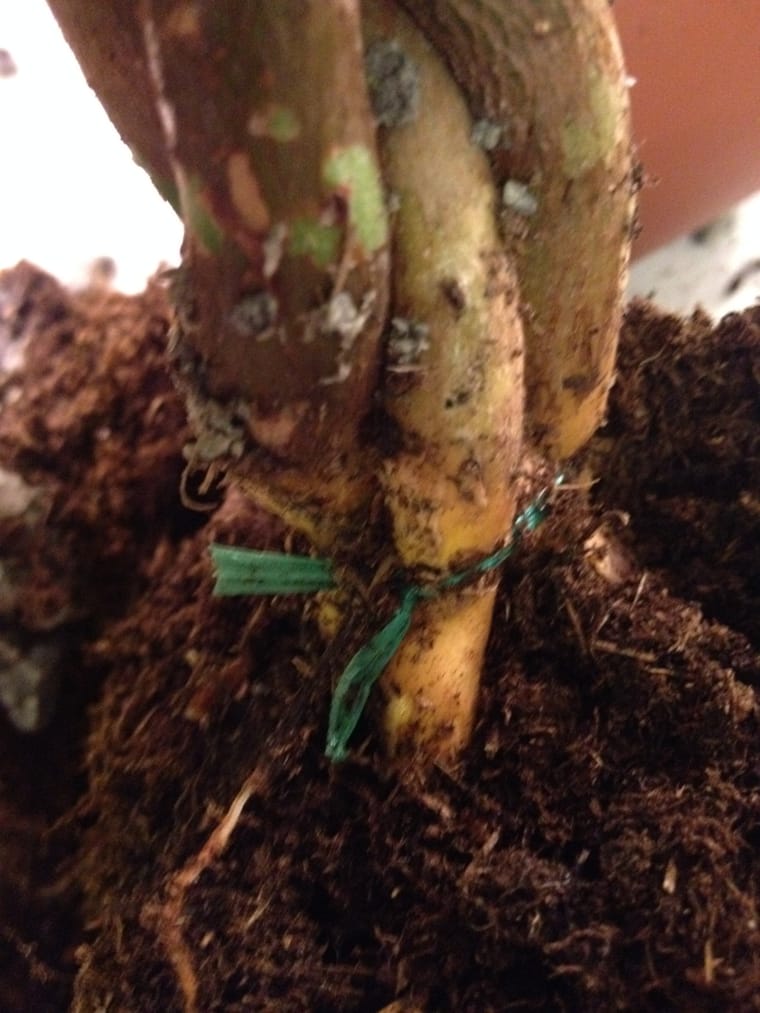 I found this green tie under the rocks and soil 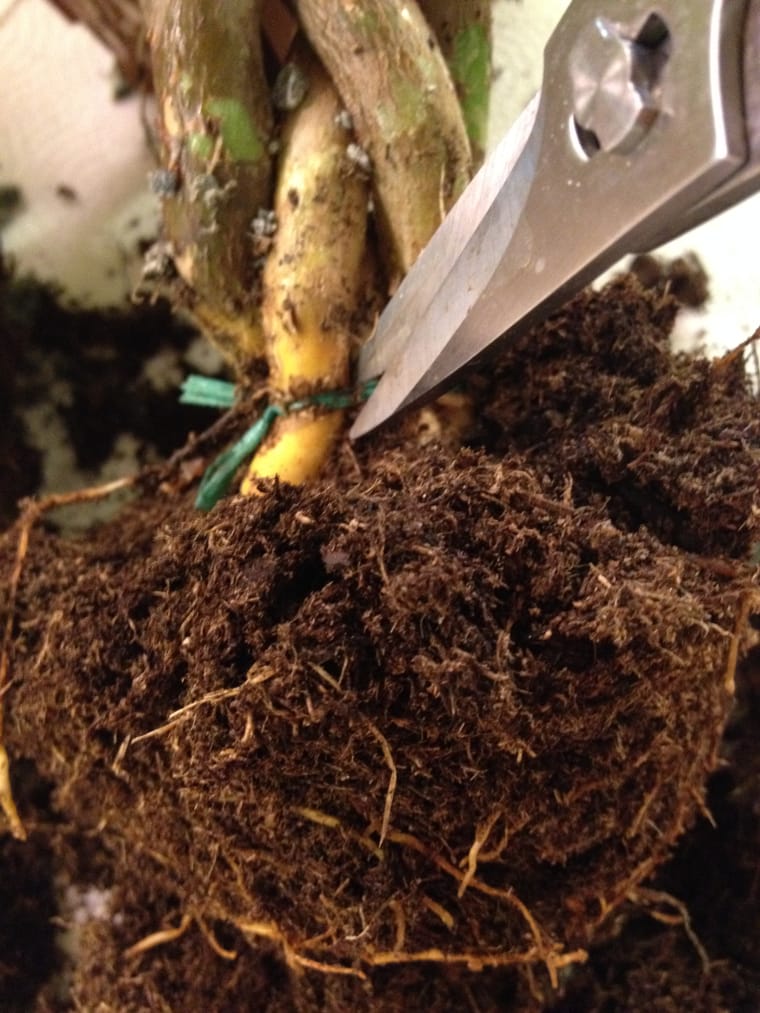 I cut the ties immediately 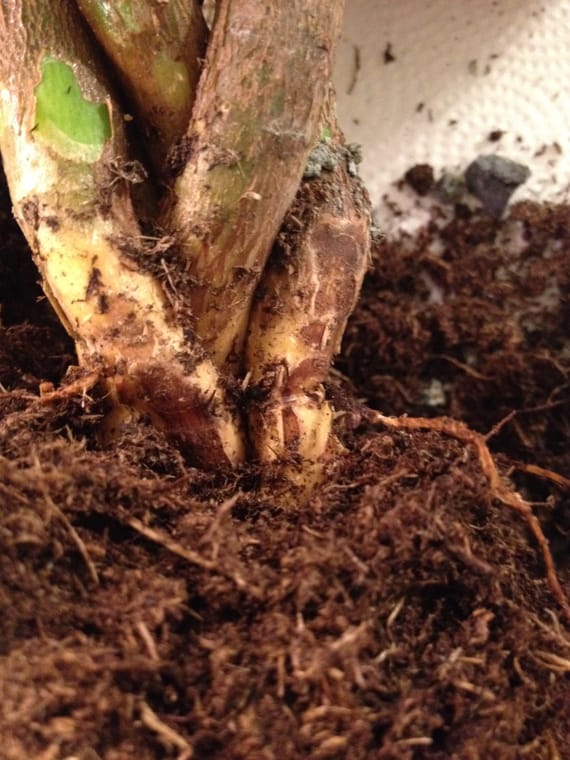 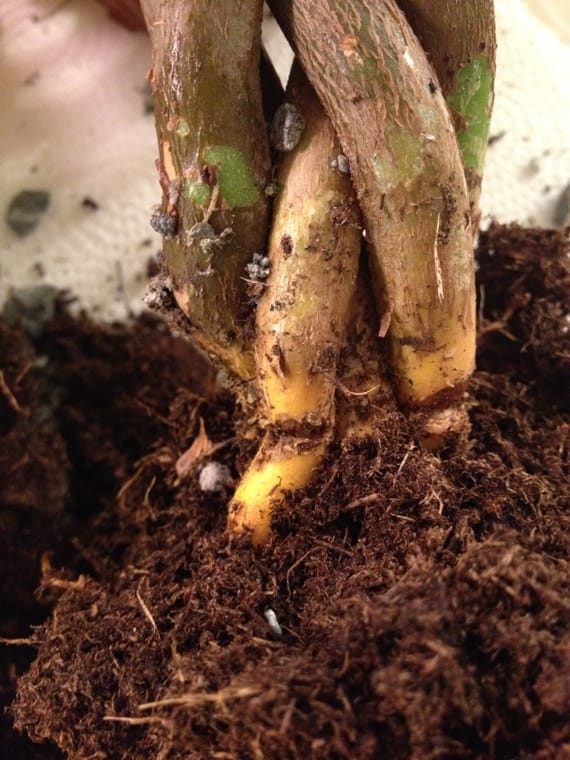 The damage was caught in time

As you can see in the pictures above, this plant already has damage from the too tight twist tie, but I got it off in time and it will be fine. If I hadn’t removed it though, it would have eventually girdled the plant, cutting off the water supply so it couldn’t get up into the plant.

Lastly, I drilled a hole in the cachepot it came in, added new soil, and replanted it directly into the pot. I know it is going to be a much healthier plant!
If you see a plant with glued rocks and really want it, it isn’t a terrible job to get the glued rocks off and re-pot the plant as long as you are careful. You may just be saving the plant’s life!
Have a great week, plant friends!