Did You Know Honeydew Isn’t Just a Melon But Can Mean Plant Problems? 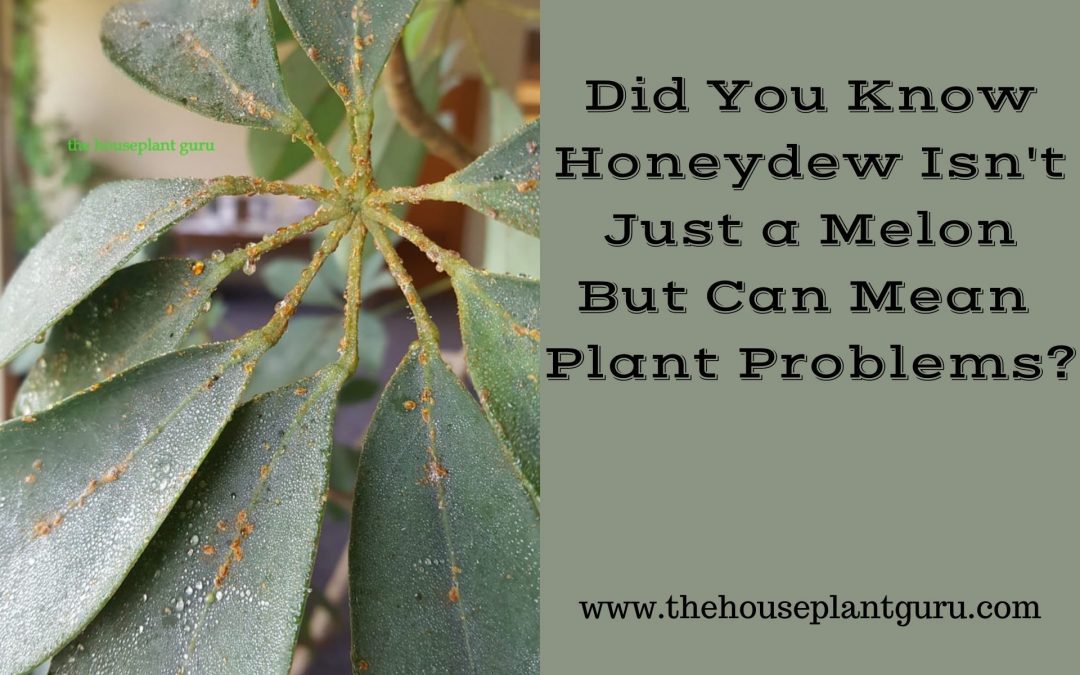 I can spot a houseplant problem “a mile away”. It’s true. Often people are perplexed by what is causing problems for their houseplants. I’d like to help identify the problems and the ways to solve them. Let’s start with insects that secrete honeydew, which means plant problems. 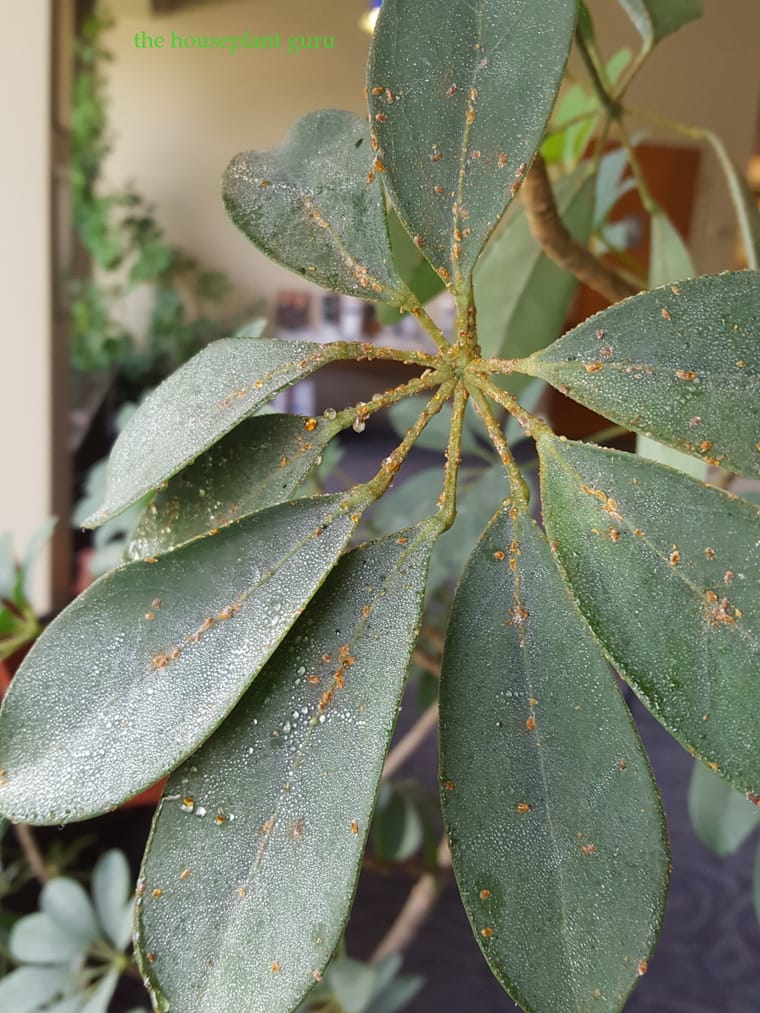 Look at the honeydew dripping from this Schefflera covered with scale

Honeydew -Not Just a Melon

When you have shiny, sticky leaves on your houseplants, it usually means you have a pest problem, unless someone has recently spilled honey or some such substance on your plant.
On the following plants, you will notice a shiny substance. If you touched it, you would find it is sticky, as well. This is the excretion (yes, it is what you are thinking) from certain insects. It comes from scale, mealybugs, and aphids and can attract ants. The first is a soft scale which are the brown spots you see in the following pictures. Insects are living under the brown covering and they are sucking the juices from your plants and slowly killing them. They then excrete the leftovers and it is deposited on your plants and if the infestation is large enough, on your floors and carpeting. Yuck! I have witnessed this at a library when my foot stuck to the floor. 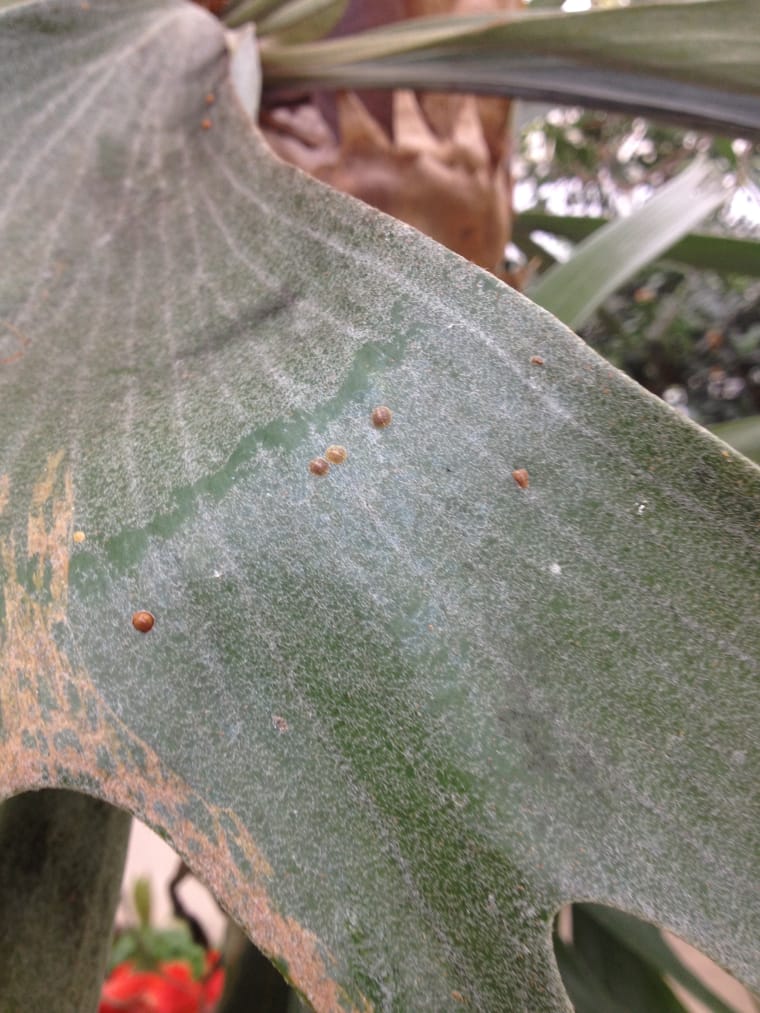 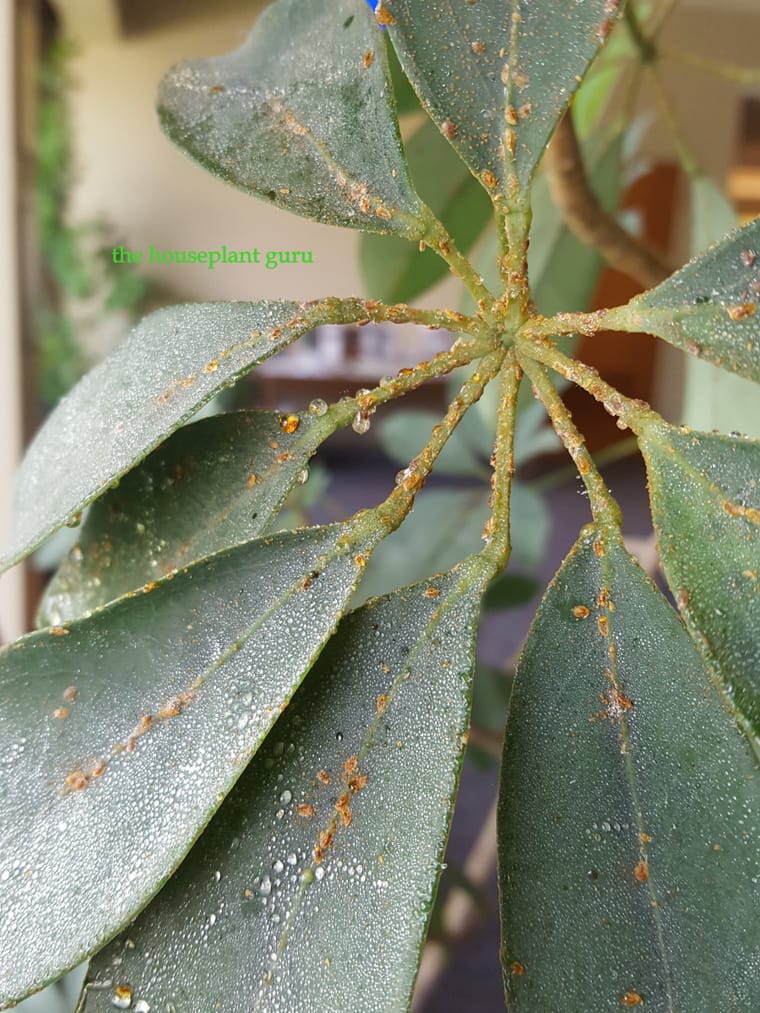 Scale on schefllera with dripping honeydew 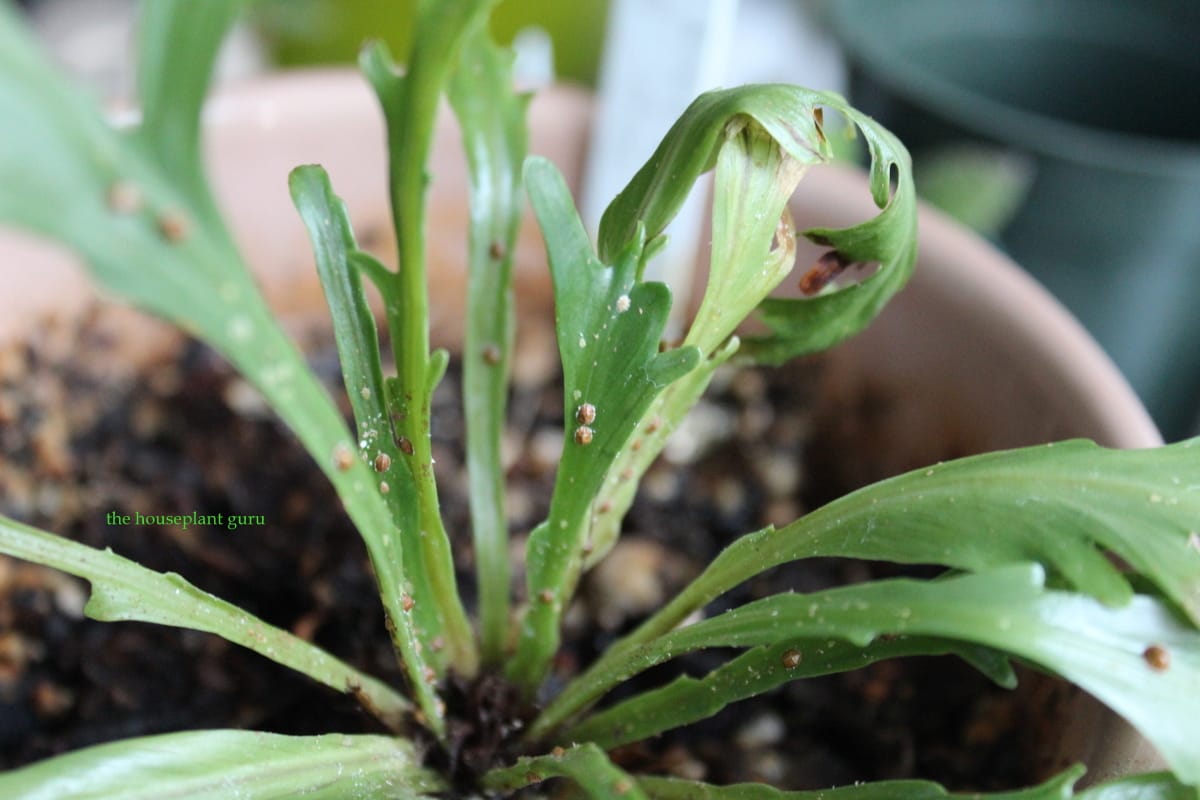 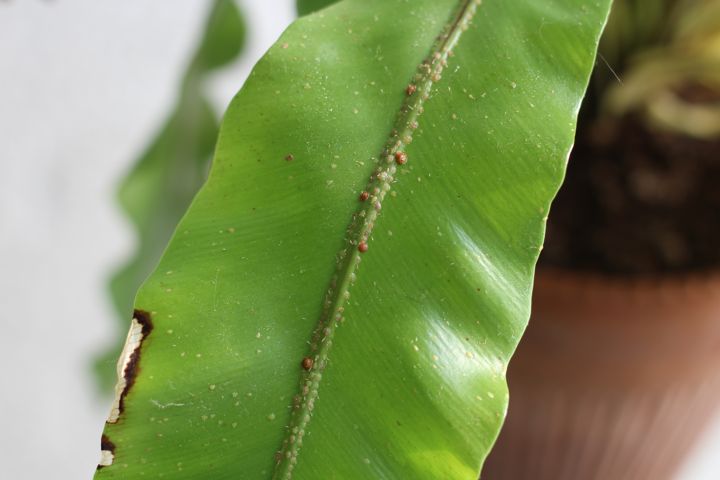 As you can see from these pictures, scale love ferns and Schefflera, but also love ficus, palms, and many other plants and can be hard to get under control. My brother sent me the picture below, asking if there was any hope for his palm and I told him no. Not only does it have scale, but it also has spider mites, which most people usually miss. Unfortunately, they are quite obvious on this plant which isn’t good, but we will talk about them later. The spots on the stem are the scale insects. 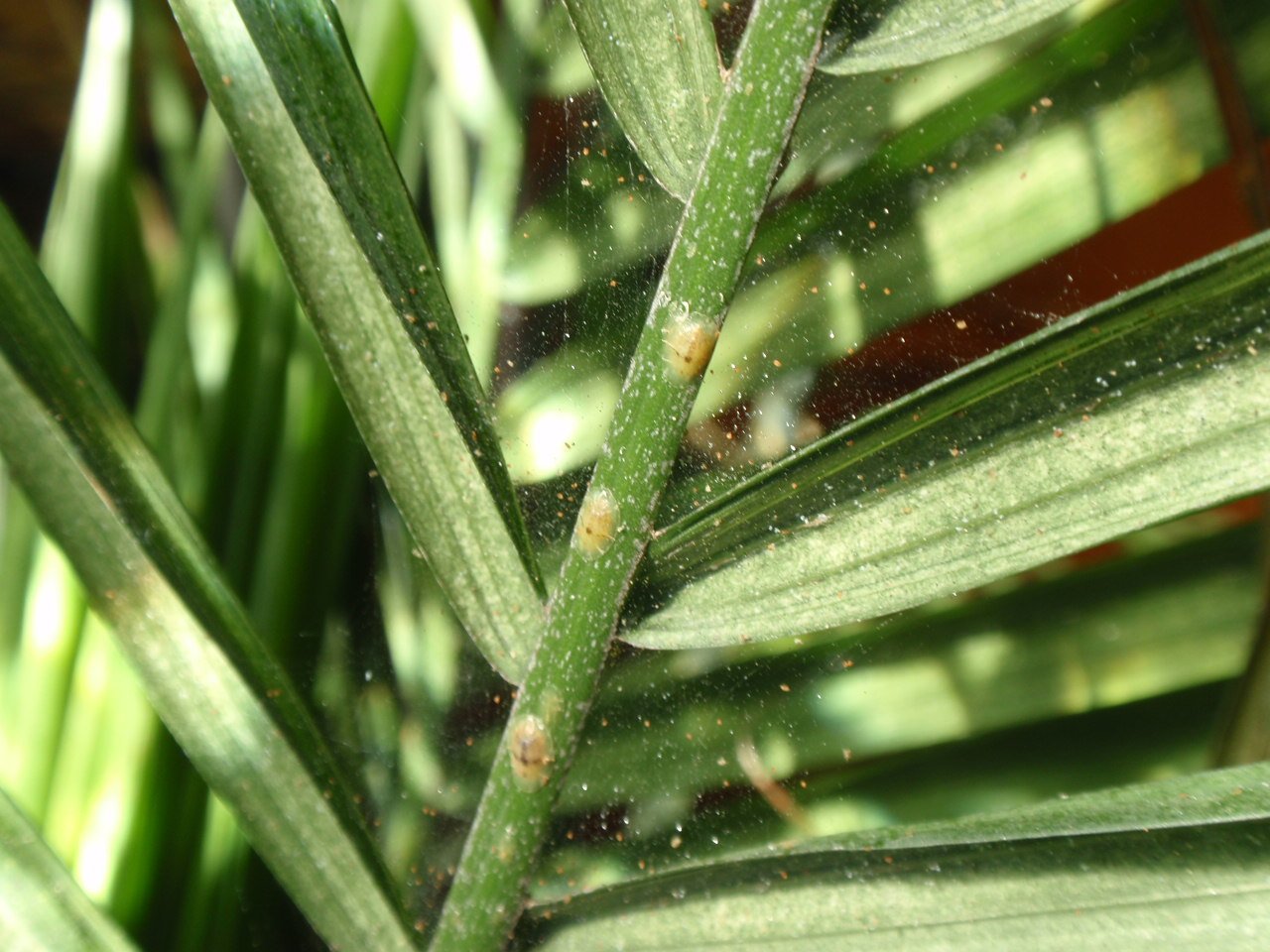 Scale and mites on a palm

The second pest is mealybugs and they are slow-moving (sometimes quite fast) insects that like to hide in crevices and under leaves. Mealybugs are hard to control and also suck the juice out of your plants and excrete honeydew everywhere. 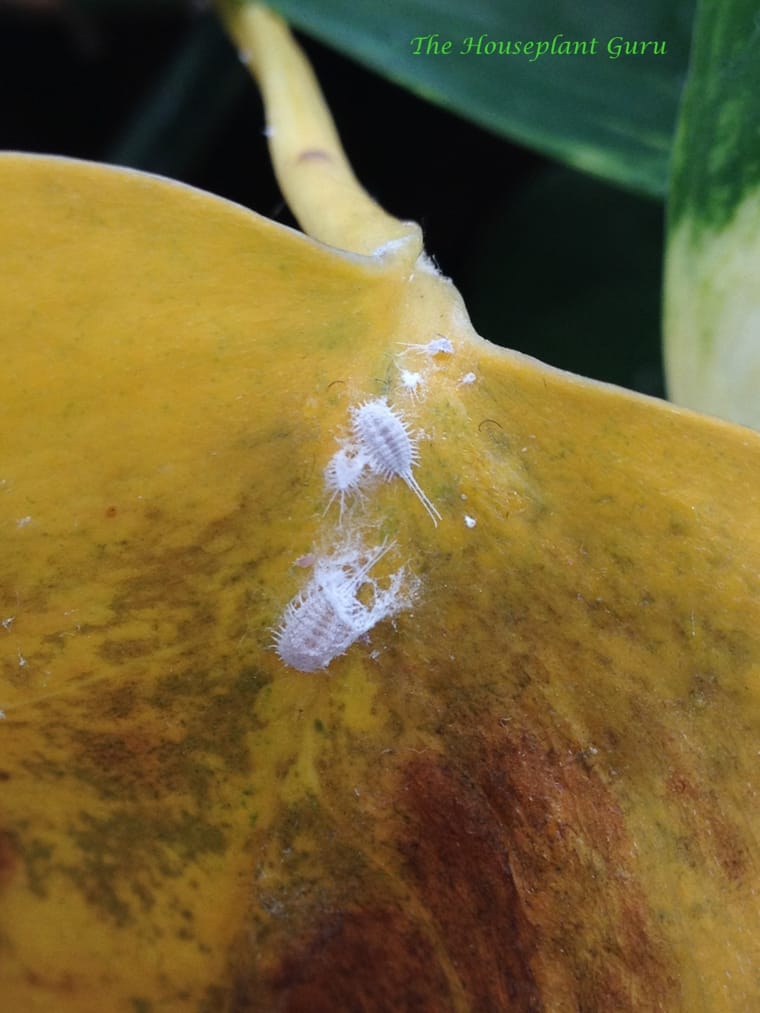 mealybug on a pothos leaf 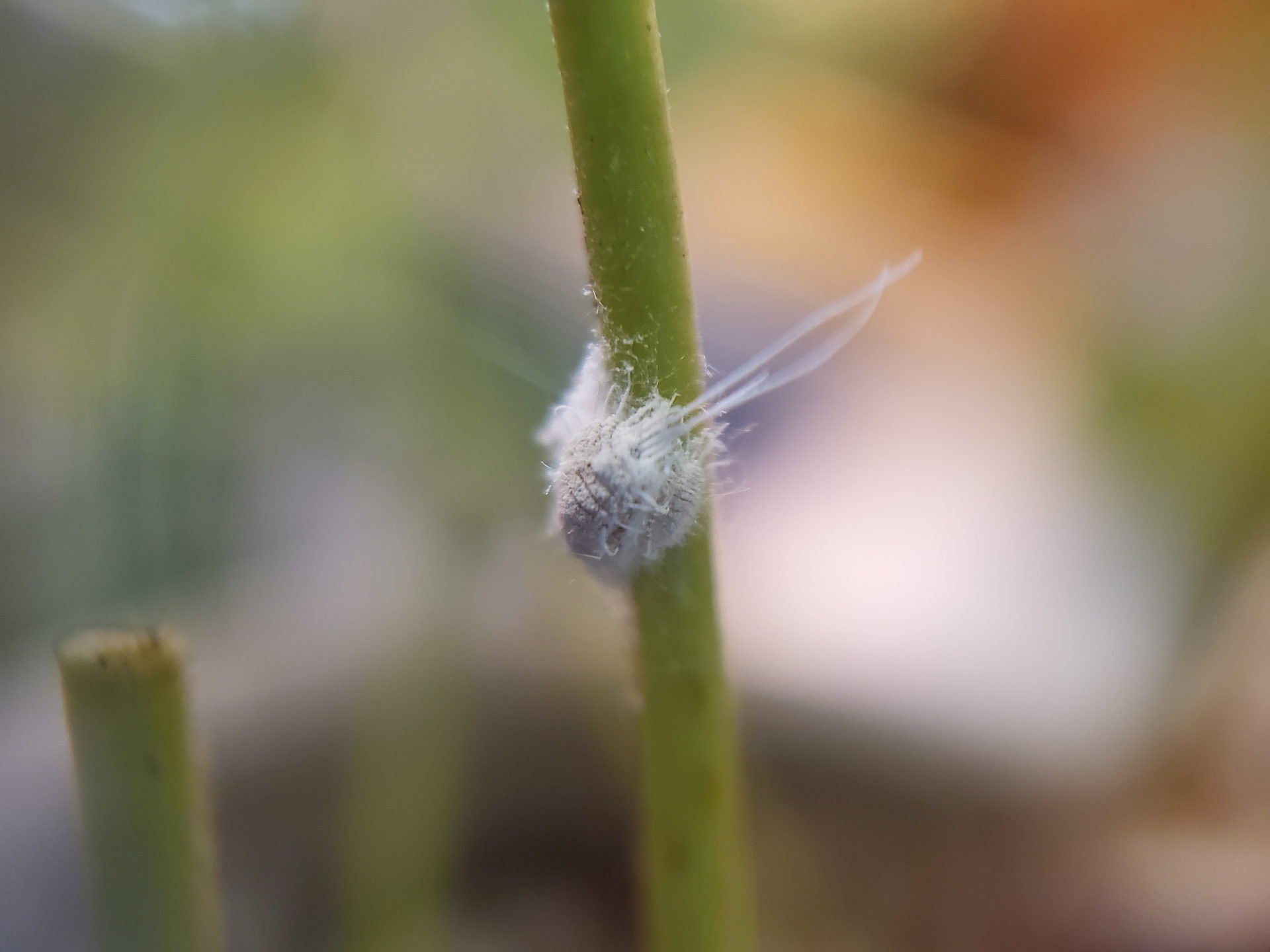 Aphids aren’t usually a problem inside, but it does happen. I saw this hoya at an antique store and it was covered with them. Aphids can be different colors including yellow (below), green, red, or black. They prefer the new tender growth of a plant and are easy to wash off with a stiff spray of water. This hoya was completely covering a pole clear to the ceiling of a large building so washing wouldn’t have been a choice, so an insecticide would have been the only choice. 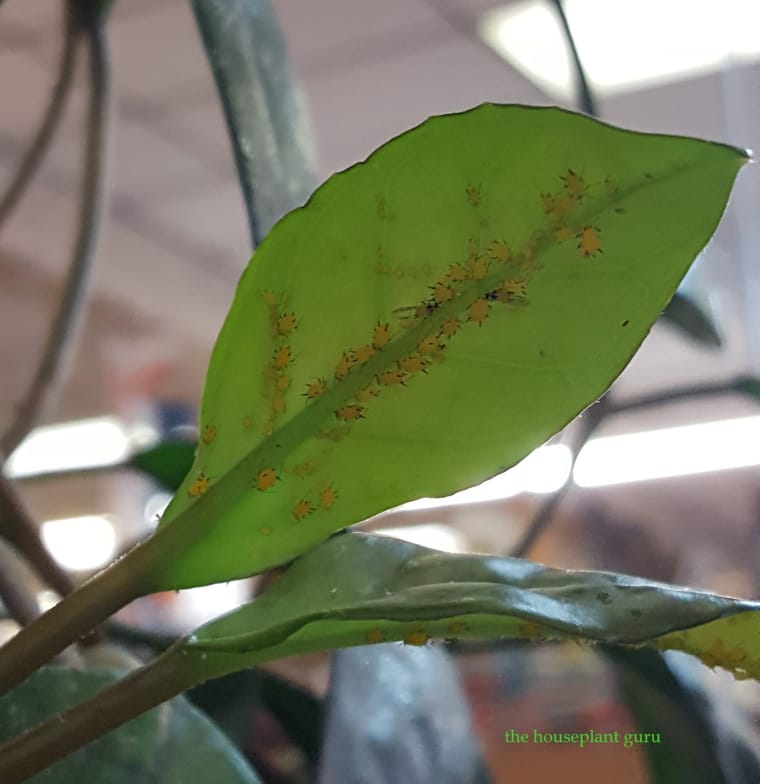 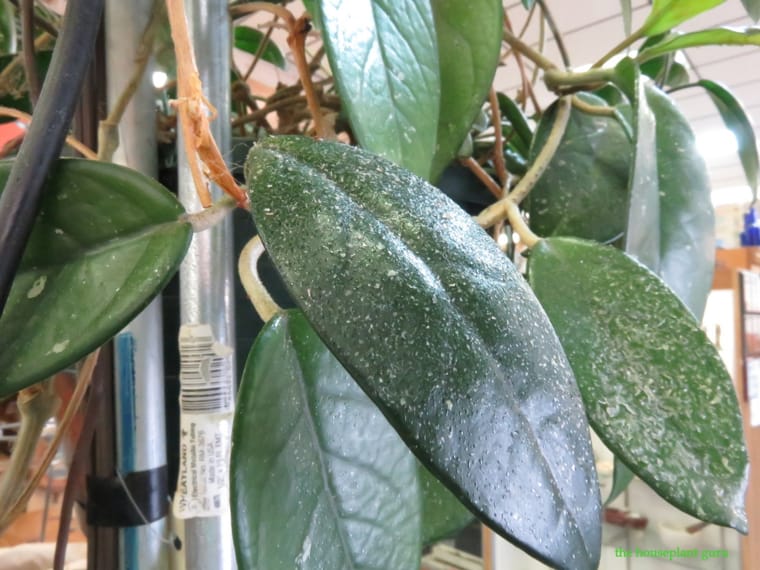 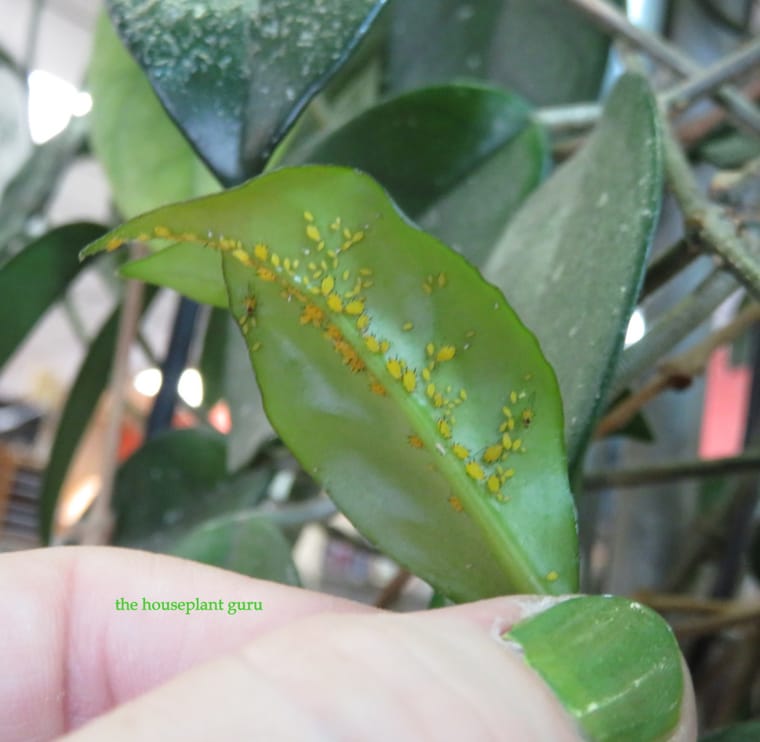 If honeydew is covering the plant, it can lead to a growth of black sooty mold which grows on the sticky substance. When a plant is covered with sooty mold it cannot photosynthesize well as the light cannot get to the leaf surface. The mold can be wiped off with the honeydew, but if it is too bad, it may mean your plant is beyond saving and it is better to discard it. 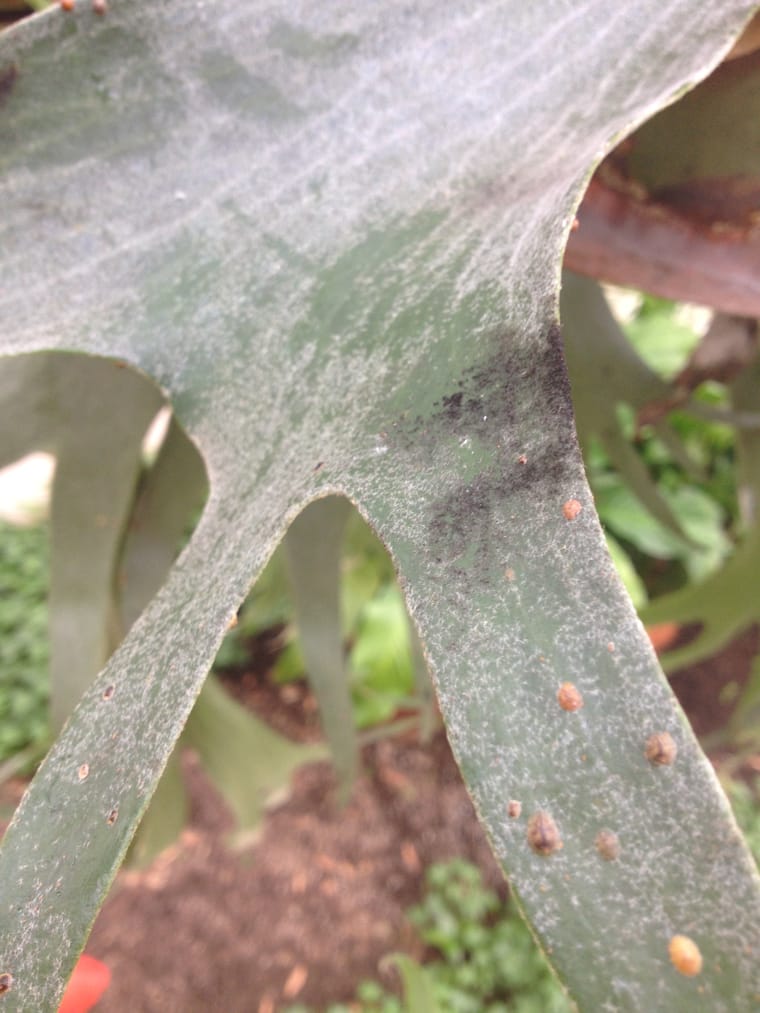 Scale on a staghorn fern with black sooty mold 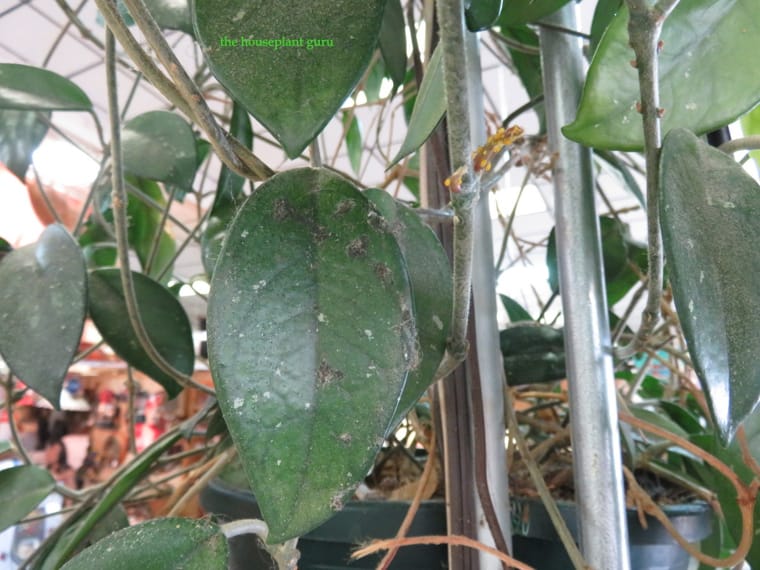 How do you eradicate these plant juice-sucking insects? One way is to get some cotton swabs, dip them in rubbing alcohol, and touch each one of the insects. The alcohol removes their protective coating, desiccating them.

Another solution, which can be used in combination with the alcohol, is neem oil which smothers the insects and insecticidal soap is also a good product to try.

If these remedies do not work, a systemic insecticide may be your next step. I use Bonide Houseplant Insecticide which has a low percentage of the insecticide imidacloprid. The product, placed in the soil, moves through the plant when it is watered. When the insects chew on the plant, they die, but I wouldn’t recommend using this if you have pets that nibble your plants or small children present.

If you would like to use biological control, there are a few different choices. Cryptolaemus, the mealybug destroyer, is an insect that eats the mealybugs in the immature and mature stages of their lives. They were imported from Australia in 1891 to control citrus mealybugs in California and also control long-tailed mealybugs and some scale. I have only ever seen these in greenhouse settings, never in a home, but I’m sure they would work anywhere. The only downside to this is that this control measure involves more insects. I’m sure some people would rather not introduce more insects into their homes. Another biological is the parasitic wasp, Leptomastix dactylopii. They attack citrus mealybug but do not usually control the other varieties of mealybug. They are native to Brazil and were introduced to America in 1934-35. These are good at finding low populations of mealybugs, so if you have a small problem, these are a good control measure.

If it is the scale you are fighting, the red scale exterminator and Aphytis melinus are parasites of the California red scale, San Jose scale, and oleander scale. The purple scale parasite, Rhizobius lophanthae, is a small black lady beetle that will eat both the larvae and adult scales and will also eat mealybugs. You can find these predators at biological control mail-order sources.

Let’s try to use the least toxic control for the insects on our houseplants. We want to be conscious of the products we use in our homes and on our plants. Yet, we also don’t want to lose our fern from great-grandma that cannot be replaced. Try the least toxic control, and if that isn’t working, try something else. If you don’t want to use chemicals, then you have to decide whether the plant is important enough to keep fighting the insects, or if you should just throw the plant away and call it a day. And go buy another!

P.S. This post contains an affiliate link that if you purchase the product, I will receive credit for.