How Exciting that Peperomia is Houseplant of the Year for 2022! 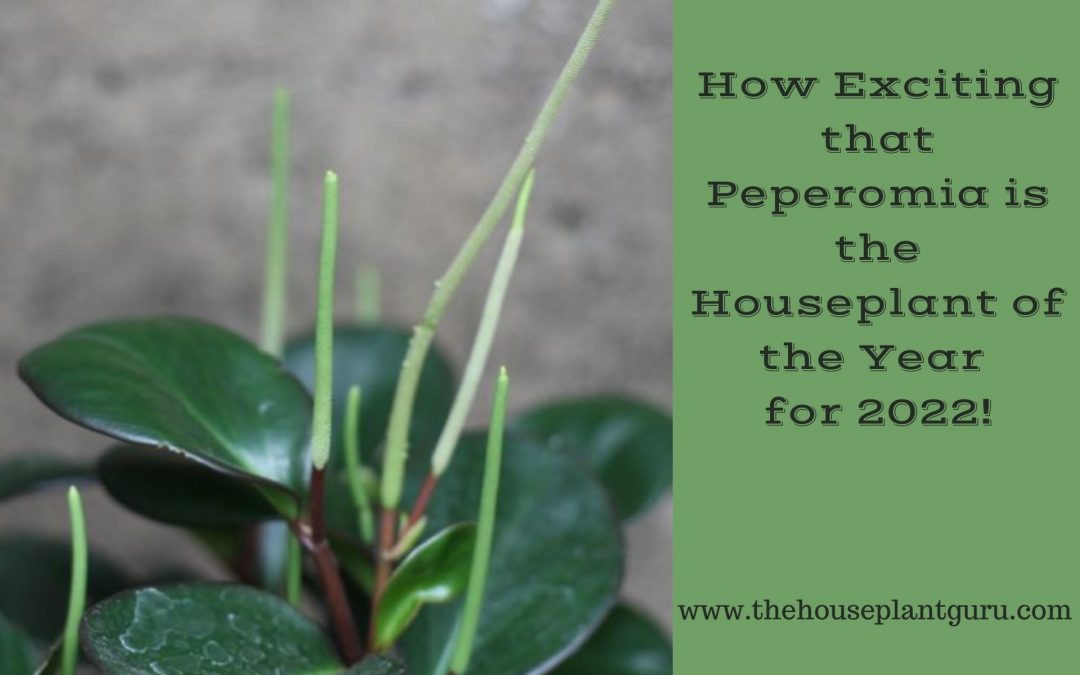 Did you know there is a “houseplant of the year”? Well, if you don’t, no worries because it is the first year. And it’s about time. Every year The National Garden Bureau chooses one annual, one perennial, one bulb crop, one edible, and one shrub for the “year of” plants. This is a quote from their website -“Plants are chosen because they are popular, easy-to-grow, widely adaptable, genetically diverse, and versatile.” Peperomias are having their much-deserved time in the sun, though they have been sold as houseplants since the 1930s. Picking the peperomia as the first houseplant of the year makes sense and fits the criteria perfectly. 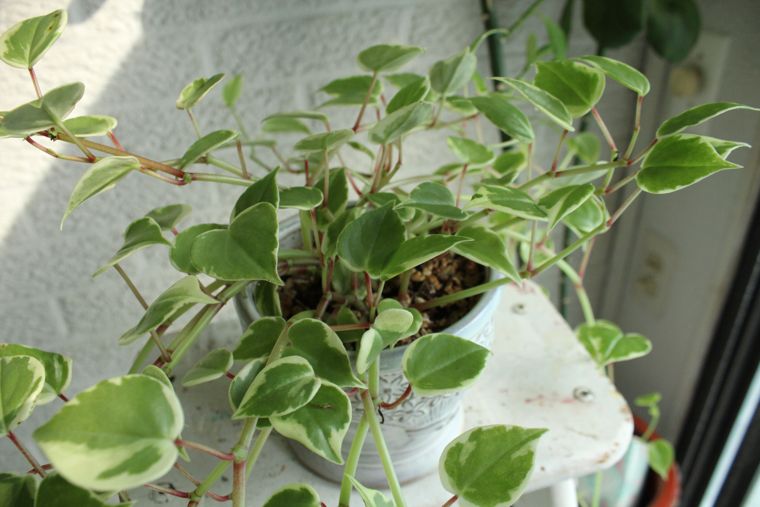 The peperomia family isn’t in the pepper (capsicum) family that includes sweet or hot peppers, but the pepper (Piper nigrum) family used to season your food. Most are easy to take care of and make great houseplants as they don’t become huge plants. They range from bushy forms to upright, cascading, and slight to fleshy succulent plants. Many peperomias survive in nature as epiphytes or lithophytes, growing on other living and non-living things. Because they grow mostly in the understory in the tropics, they don’t demand bright light. Peperomias don’t prefer to be in the full sun, though the plants with thick fleshy leaves will need more light than the thinner leaved, less succulent varieties. Many of these plants need to be treated somewhat like succulents as they have thick, succulent leaves.

As you can see below, this peperomia variety would need more water than the succulent leaved varieties. It has a small thin leaf, so that is a clue that it needs water more often than other peperomias. 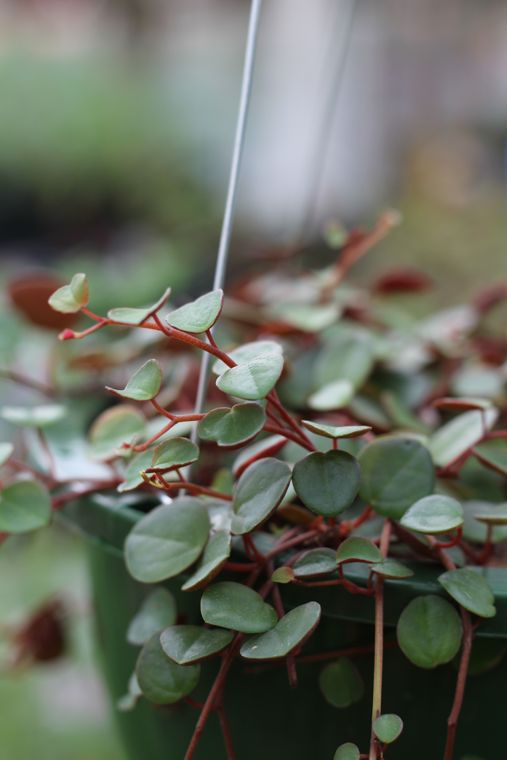 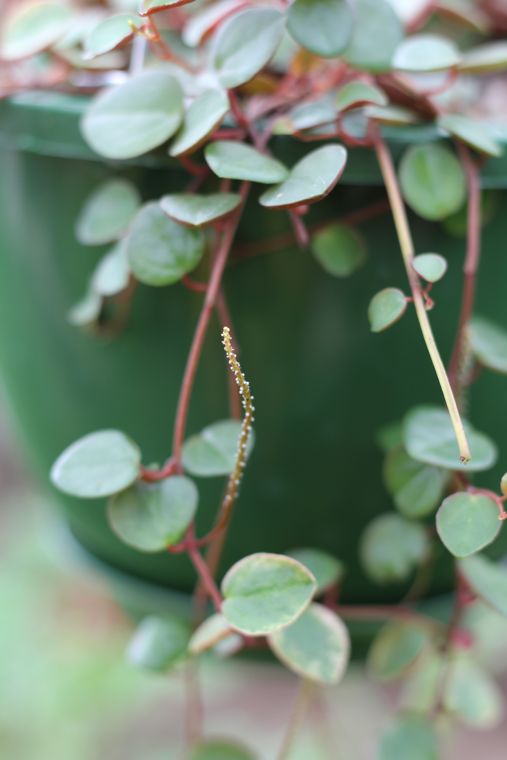 There are many varieties and Peperomia puteolata or parallel peperomia is one of my favorites. It is a cascading form that when young is an upright plant, but as it ages its stems grow longer and cascade. Its leaves are thick and it is able to store water not only in its leaves but in its stems, so this is a plant for the person who is forgetful of watering their plants. This does well in an east or west window or could even be placed under lights if you don’t have room. 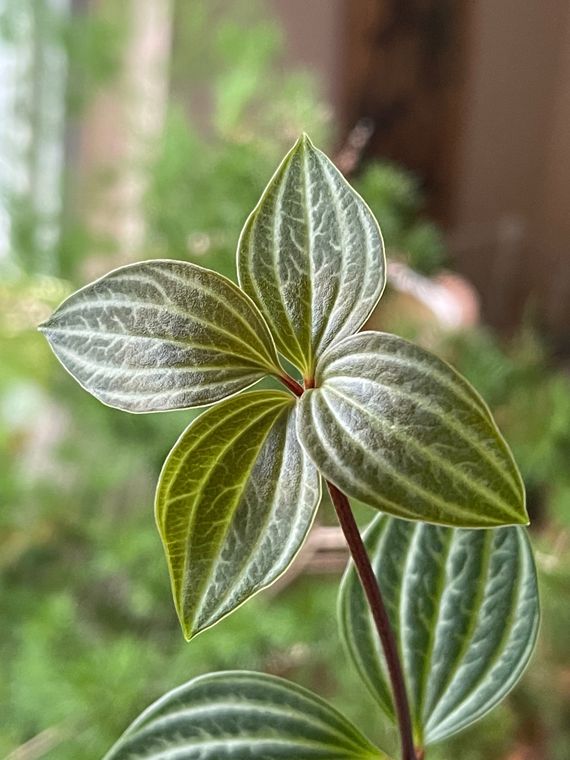 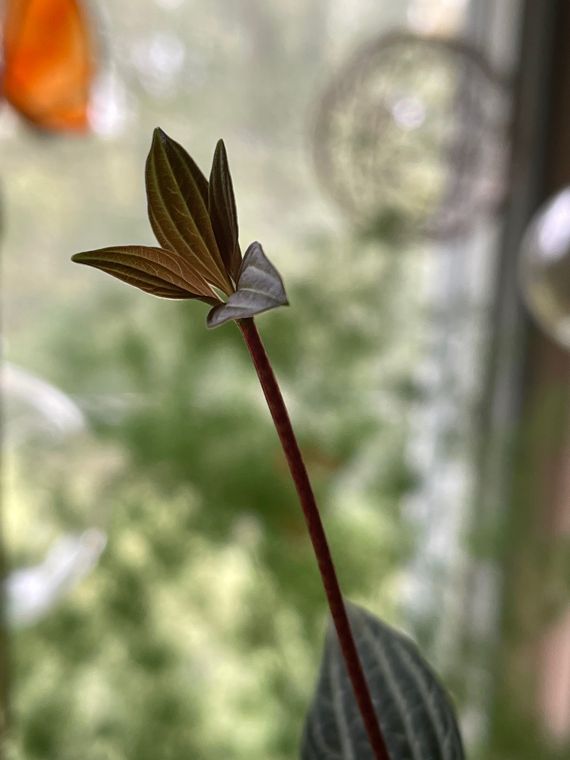 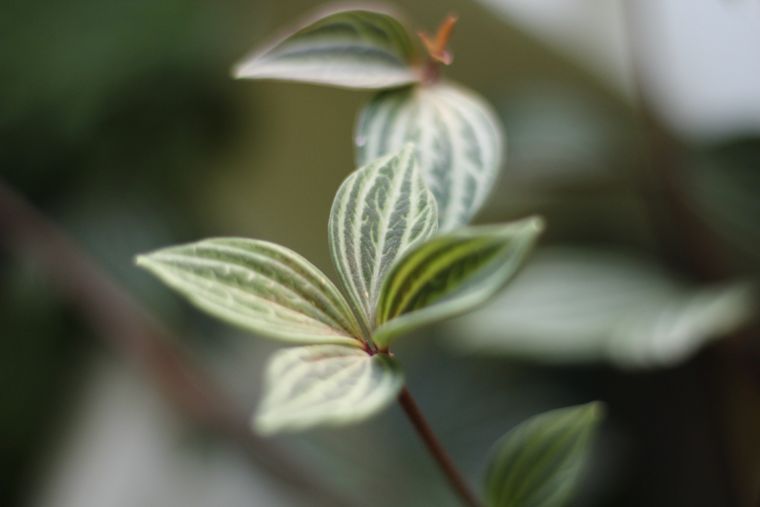 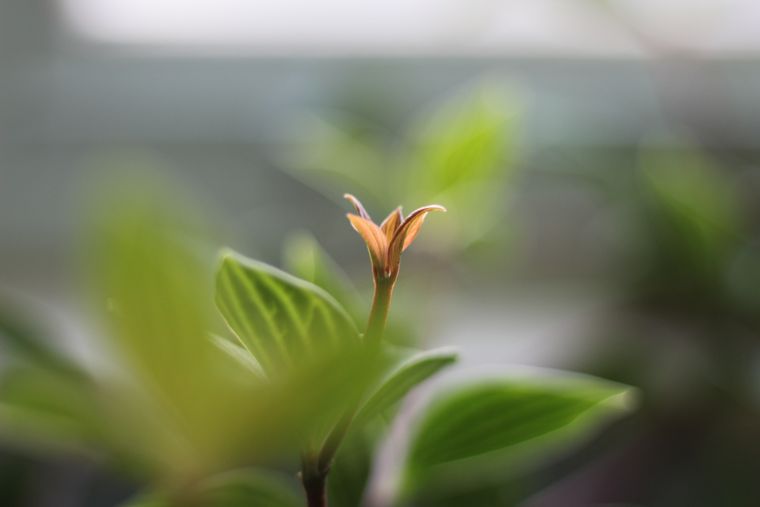 Another favorite cascading peperomia is ‘Hope’, a cross between P. deppeana and P. quadrifolia. I have had mine for years and it has taken a lot of abuse from me. It is definitely tolerant of drying out. It is a wonderful plant! 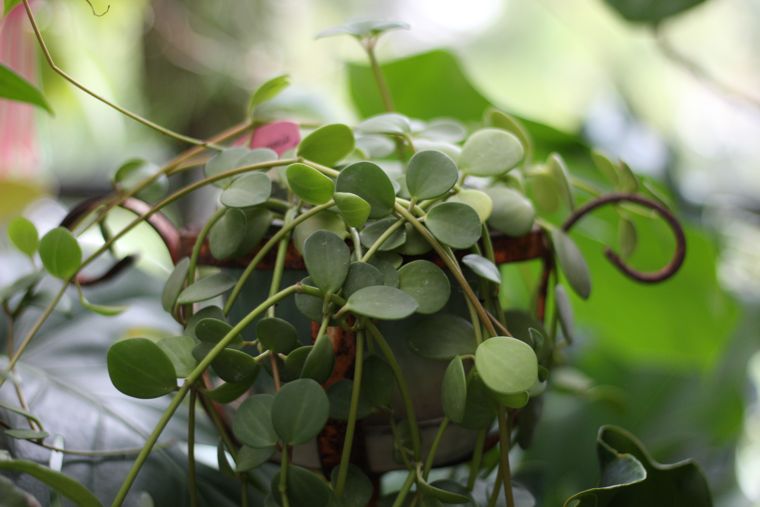 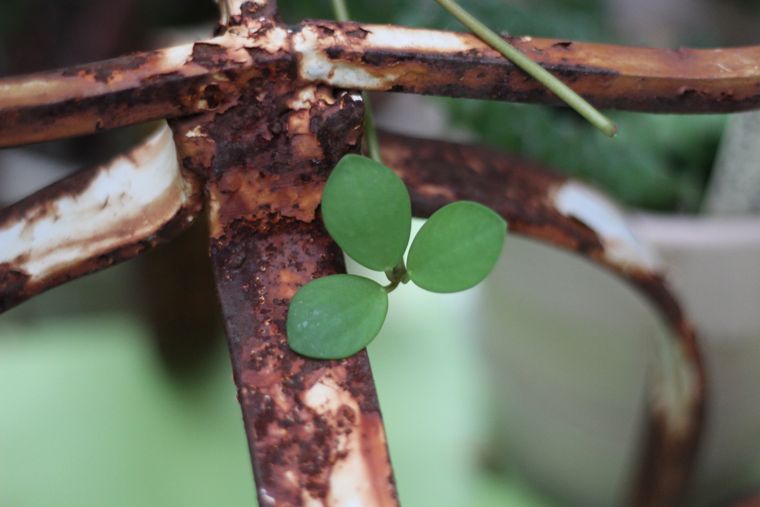 The succulent variety P. obtusifolia is easy to grow as it is not the high-light lover that most succulents are. It thrives in a medium-light and is forgiving of drying out because of its succulence. Its adaptability makes this peperomia a winner all around and it comes in a variegated form as well. 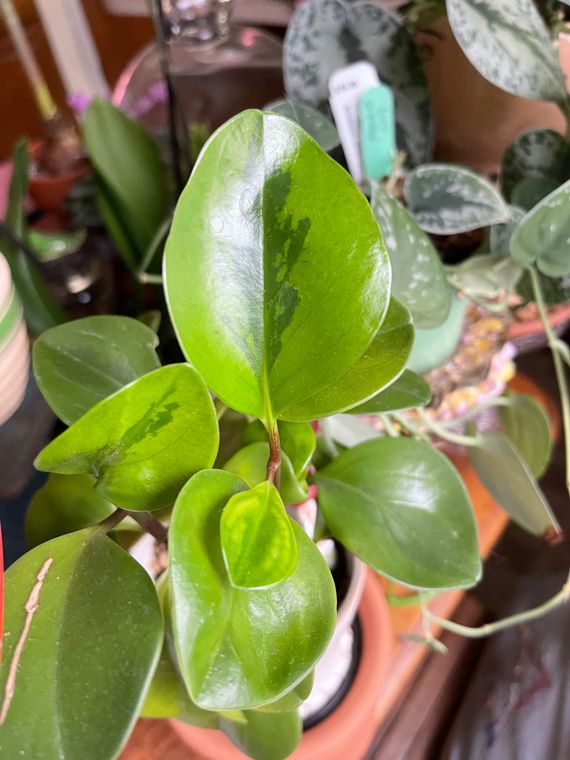 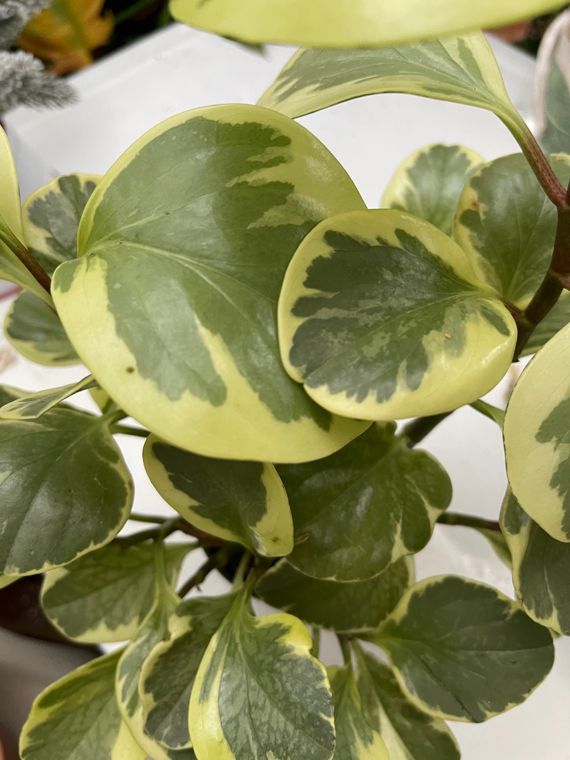 The inflorescence of the peperomia resembles a rat-tail and is called a spadix. They lack a perianth (petals or sepals) and their fruits are drupes. They aren’t the most attractive flowers so some people cut them off, which is fine. Any energy making flowers is better directed back into making foliage, as that is what peperomias are grown for. 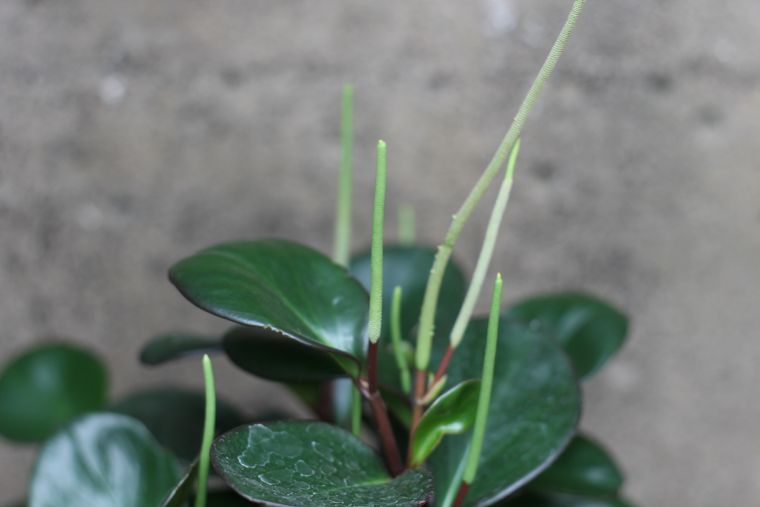 Other easy-to-find varieties include P. argyreia or the watermelon peperomia as its leaves resemble a watermelon’s rind. 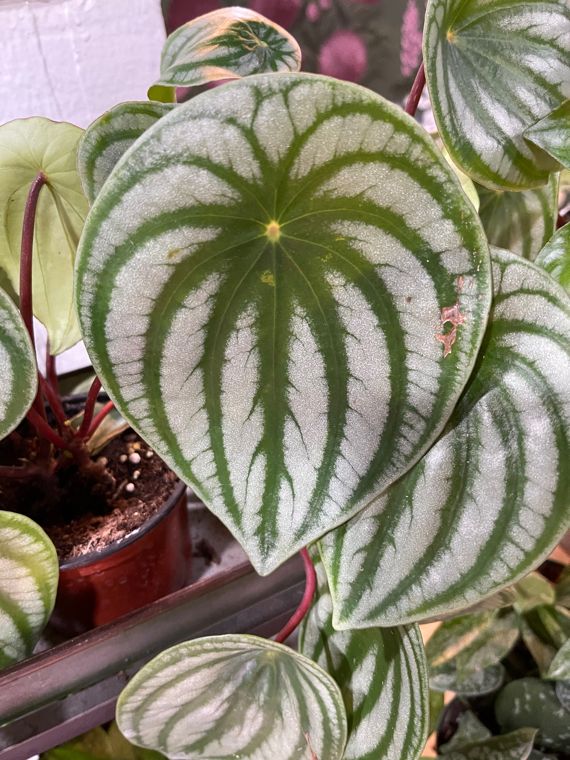 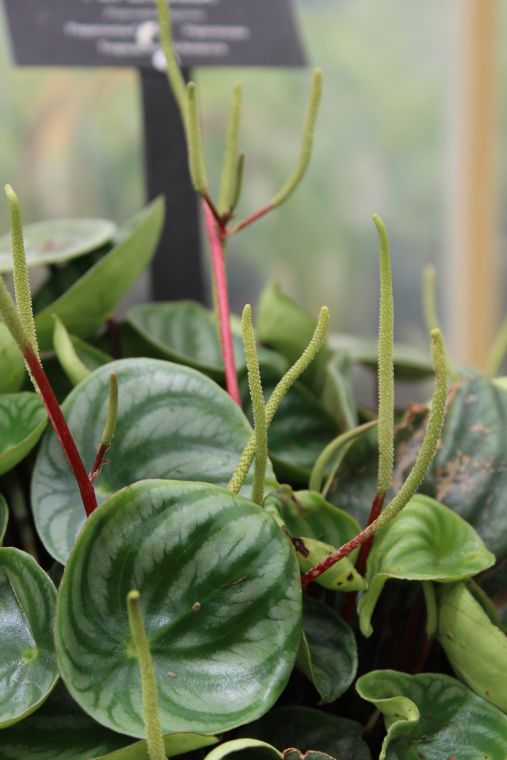 The flowers of the P. argyreia 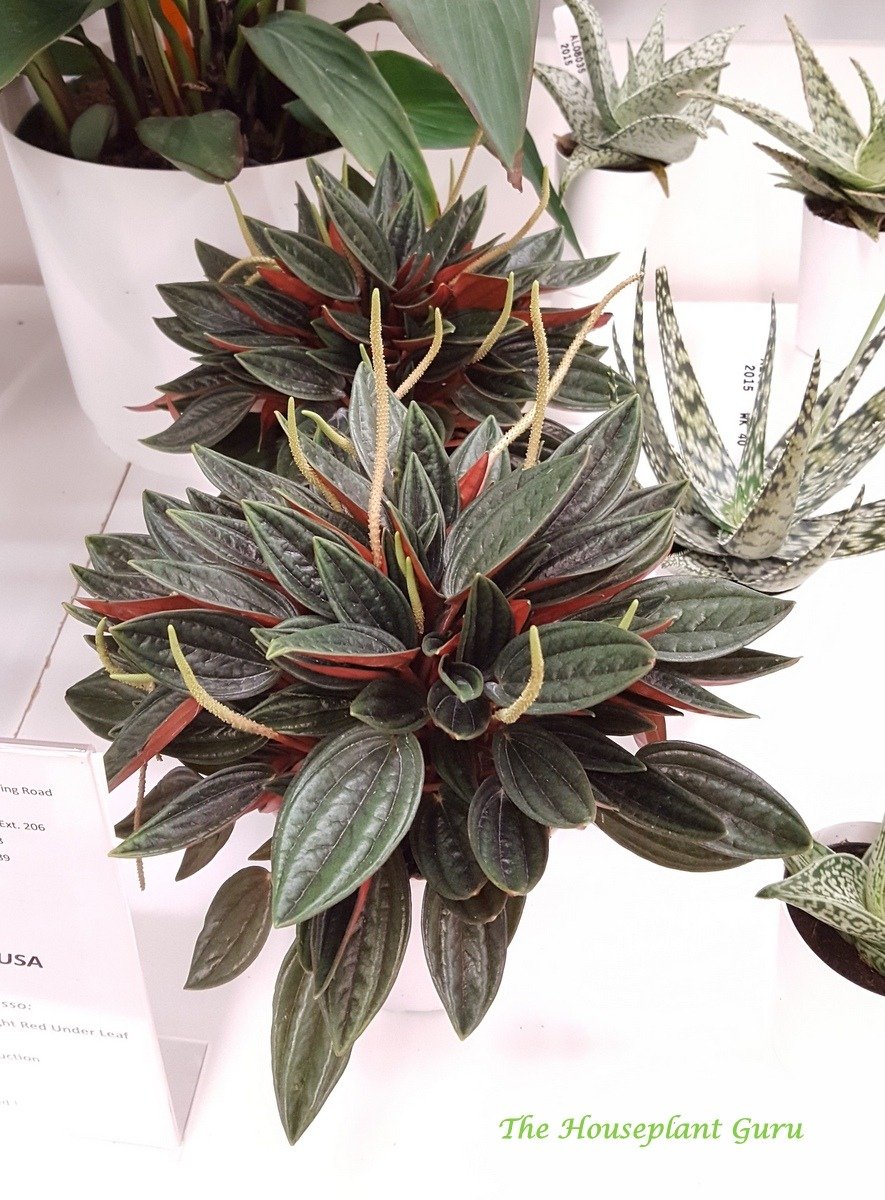 You might not guess that P. incana is a peperomia because it is a silver-leaved, fuzzy form that does prefer more sun and tolerates drying out more than the others. 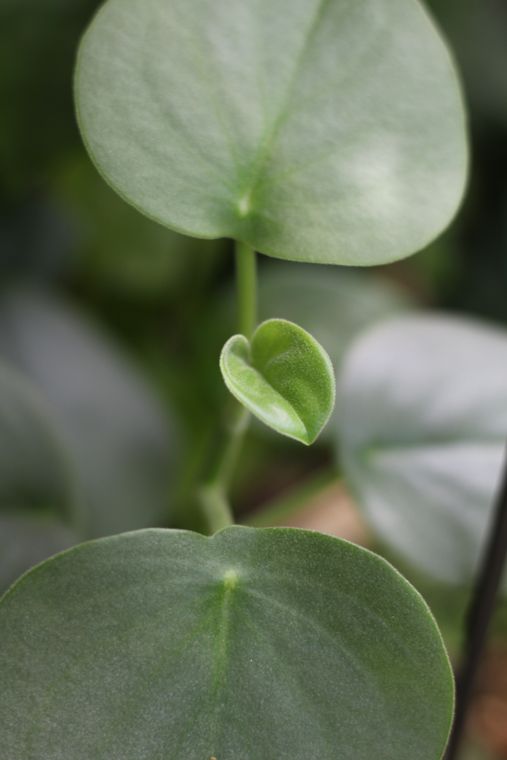 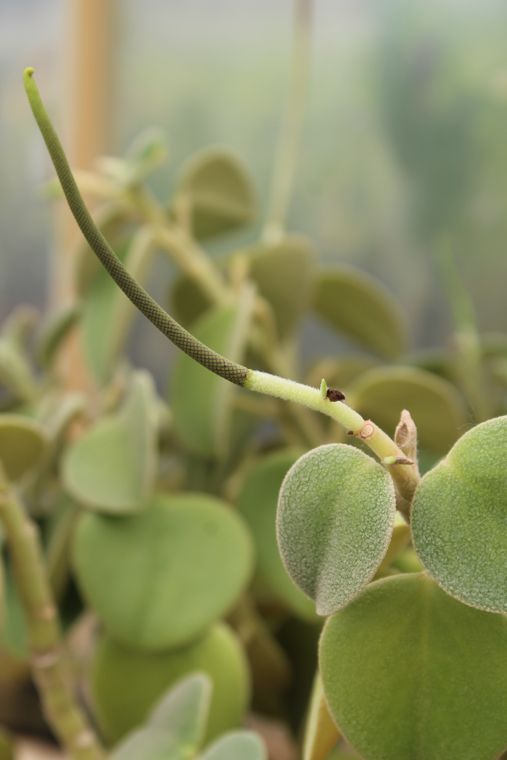 Peperomia polybotrya or raindrop peperomia is often mixed up with the more well-known Pilea peperomioides (friendship plant). It is more succulent, more tolerant of drying out, and does not have perfectly round leaves as the pilea has. 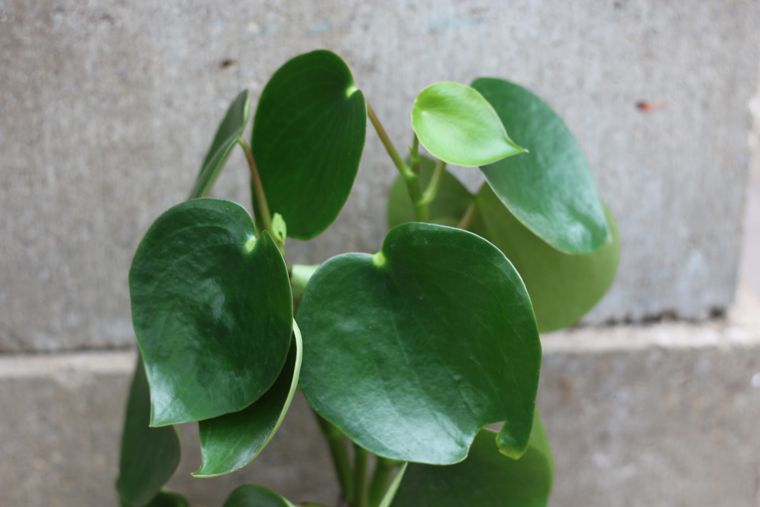 Its resemblance to miniature turtle shells makes the string of turtles or P. prostrata popular and it is easy to find at almost any garden center. 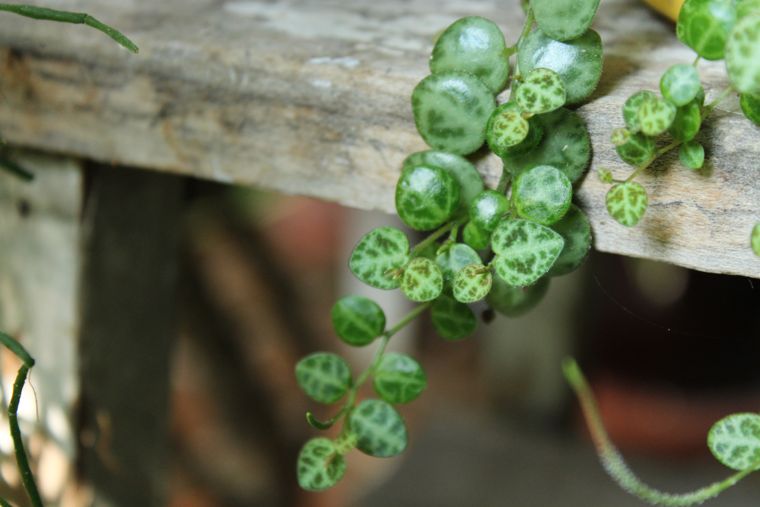 Peperomia prostrata or string of turtles

This peperomia is also called the happy bean plant. It definitely looks like a green bean plant on steroids, right? It is a succulent peperomia so keep it on the drier side. 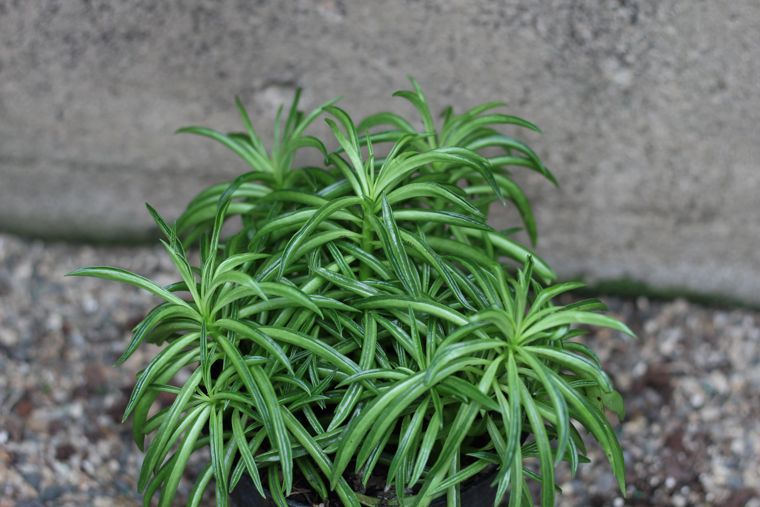 The red edge peperomia is popular because who can resist those colors? This is definitely a succulent peperomia, so treat it as such. 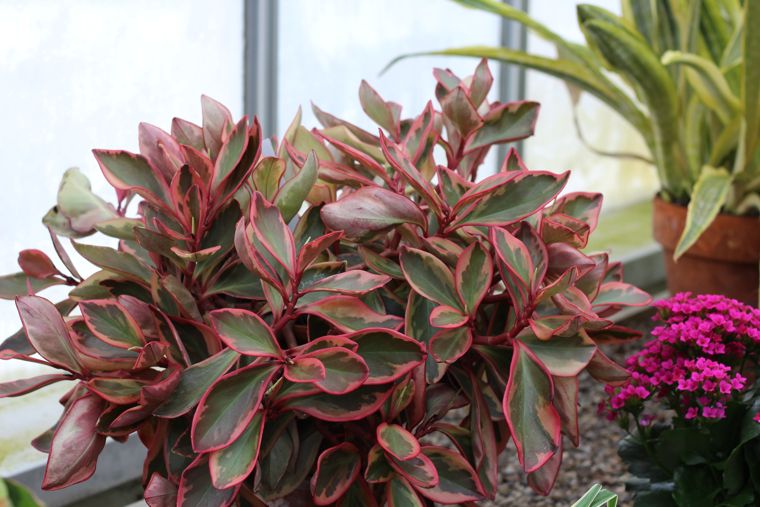 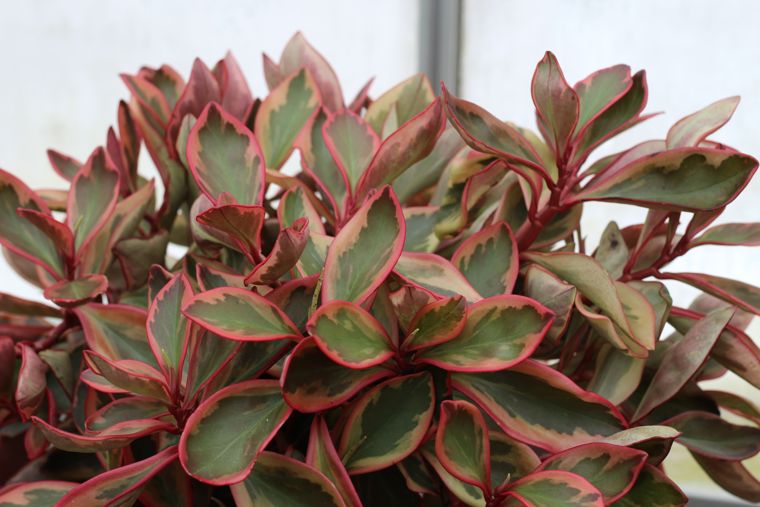 This plant is much loved because of the leaves. How cool are those quilted leaves? I love it, but I won’t lie. I never have had much luck with this particular peperomia. I’m quite sure it is because I am not consistent with watering at it doesn’t appreciate being dried out and then drowned. Most plants don’t. 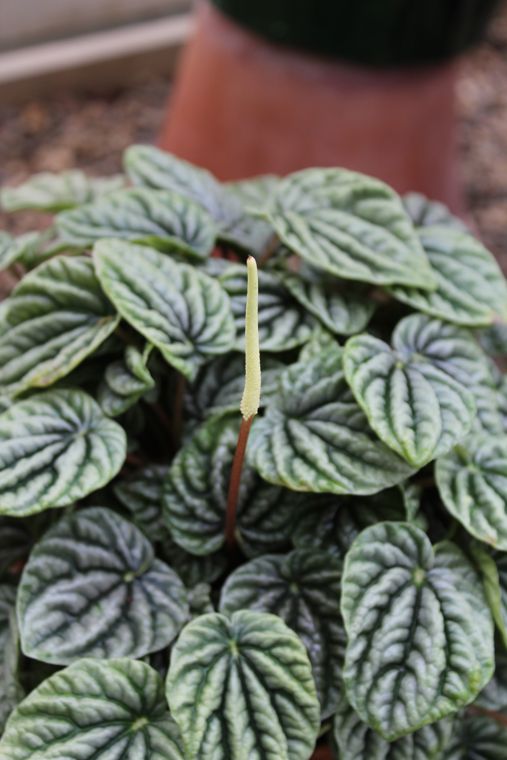 The flower of the peperomia caperata 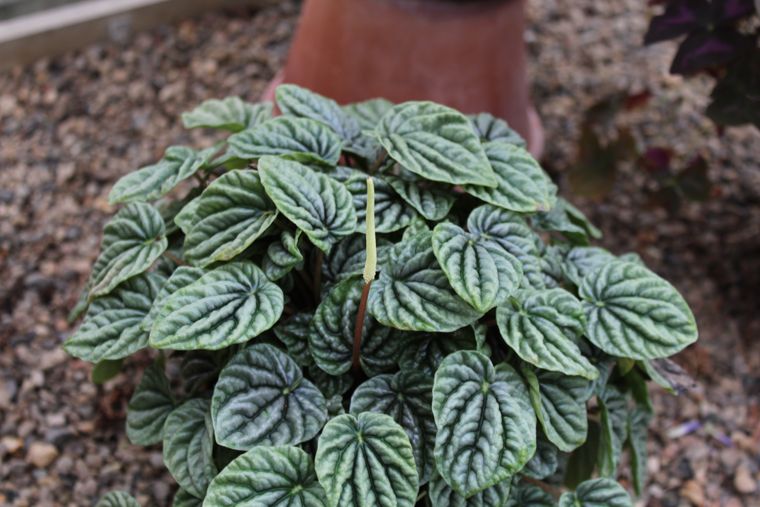 The care of peperomias depends on the variety you choose to grow. All of them are a bit succulent, either in their stems or leaves. The truly succulent types, such as P. incana and P. obtusifolia need to be treated as such. Wait until the potting medium is almost completely dry before watering again.

The less succulent types including P. argyreia, P. caperata, and P. polybotrya, tread a fine line of wanting to dry out but also not wanting to be kept too wet. Check your plant frequently, using your finger to test the moisture, and water when the medium is dry a couple of inches down into the container. Your peperomia that is too wet will send you the message loud and clear by dropping its leaves because its stems have become mushy at the base. If yellow leaves appear that may be an indicator that you have kept it too moist. You may be able to save it by allowing it to dry out if you notice the yellow leaves soon enough. Clay pots will work better for the peperomia family as they allow water to escape through the porous pot sides. Some of these Central and South American natives grow as epiphytes which indicates they don’t have extensive root systems. Keep them in a snug pot in a fast-draining potting medium for best results. After purchasing a commercial potting medium, add a good amount of perlite and/or orchid bark to the mix. This will allow the water to drain quickly but it will retain enough moisture for the plant to thrive. Peperomias in general don’t need a high light situation, including the more succulent varieties. If you purchase a variegated form, the variegation will stay brighter in a higher light situation.

If you watch the watering routine closely, keep your plant warm (above 50 degrees), and give it a medium to bright light, you should have a healthy, thriving peperomia in your plant collection. Once you have one peperomia, the need to have more varieties will come naturally. It is a great group of plants!