What Are Footed Ferns and How To Care For Them 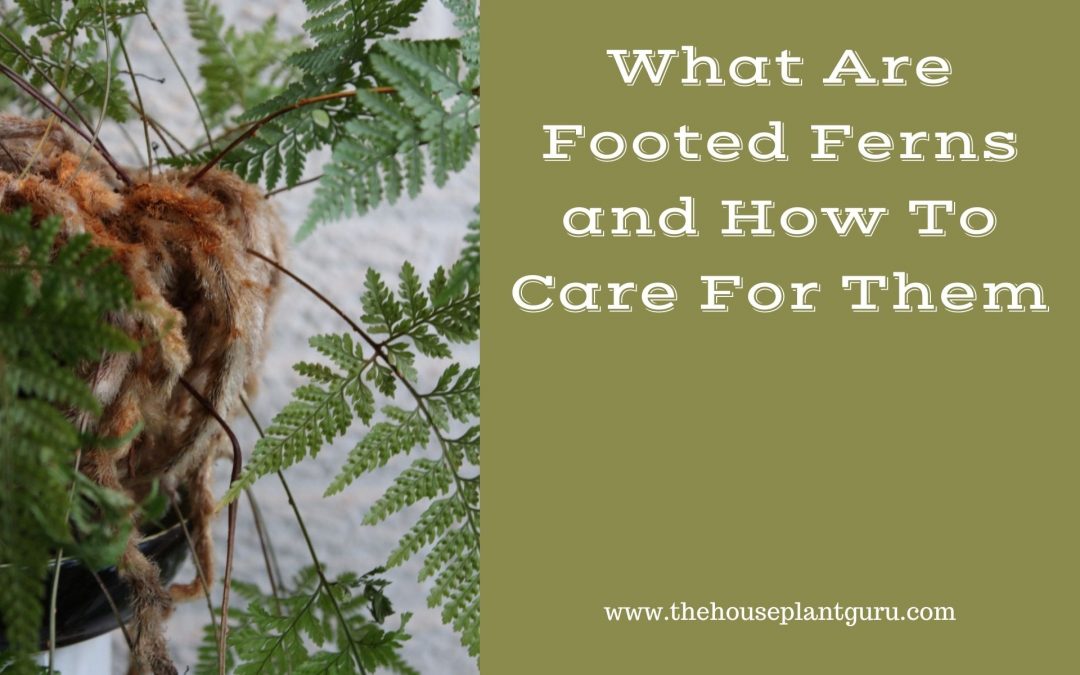 Rabbit’s foot, bear’s paw, kangaroo paw, green worm. What do all these names have in common? They all describe types of “footed” ferns. The “feet” are really rhizomes that creep and crawl across the top of the soil surface, sometimes even covering and surrounding the pot. Of course, they may be crawling across rocks or some other surface in their native habitat, living in a minuscule amount of soil. I had a rabbit’s foot fern growing on a Hawaiian lava rock without any potting medium at all, but unfortunately, it contracted a horrible case of scale and now resides in the trash. These ferns are quite susceptible to scale. They can be treated, but I decided it wasn’t worth risking my other plants, so got rid of them.  Unfortunately, at this time, I am still battling some scale on my remaining ferns but have decided to keep trying. 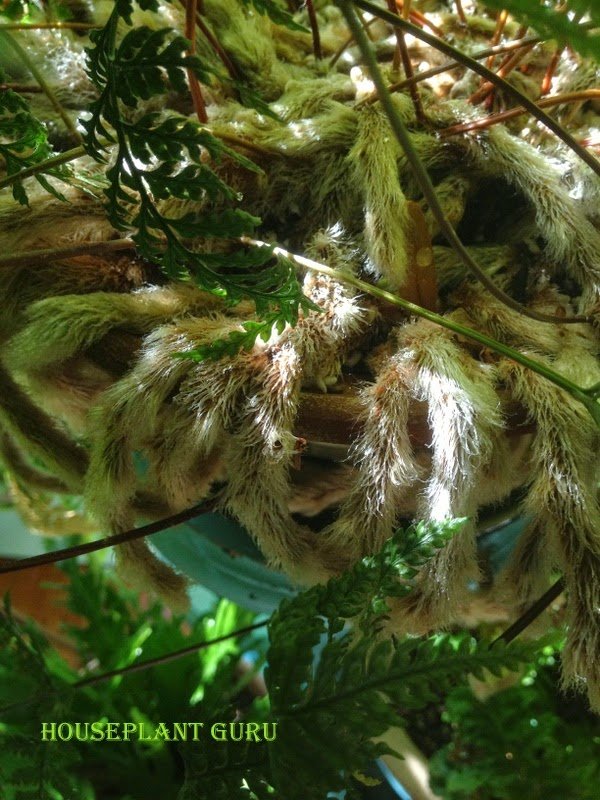 My rabbit’s foot fern Davalia fejeensis started small and you can see the difference between the pictures above and the ones below which span 7 years. I planted it in a shallow container, and that is all the potting medium it needs. The rhizomatous ferns have shallow root systems as they creep along the ground or over rocks in their native habitats. They will all thrive in moderate to bright light. Mine are in an East window and are doing well.  (The picture above is from November 2011 and the camera I had wasn’t all that wonderful so I apologize for the quality of the picture. ) Fast forward to 2018. My fern feet have completely surrounded the pot. It is still going strong now in 2021. 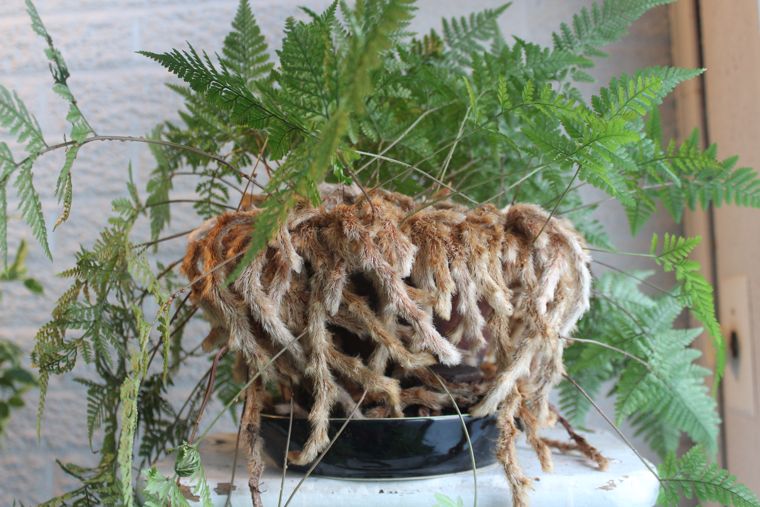 Below is my daughter’s newer rabbit’s foot fern. 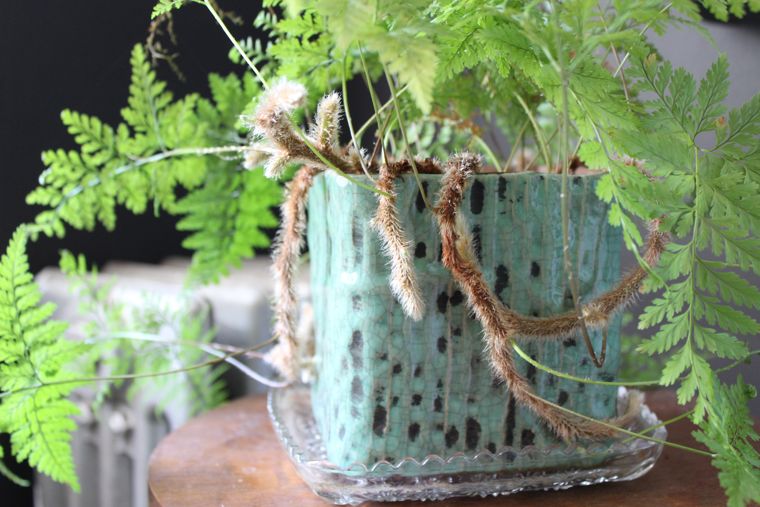 These ferns come from South East Asia, Japan, and Australia. The rabbit’s fern comes from Fiji, thus the botanical name.  They can be epiphytic or terrestrial, they like high humidity and bright, filtered light, and need well-drained soil but never let them dry out too much. I have done that to my caterpillar fern and it loses some leaves, but comes back just fine. Of course, I don’t recommend this, but I think the rhizomes hold an extra amount of moisture, and this feature has saved my plant more than once. They really want to stay evenly moist and are great plants for hanging baskets, as their “feet” can be seen better from below. I have mine on plant stands, so they are visible.

Propagation
They are able to be propagated quite easily. They can be separated or started from a piece of the rhizome. Cut a piece of rhizome away from the plant, making sure it has a frond attached to it. Lay the rhizome on top of the soil surface and pin it down to keep it upright. Make sure it stays moist and it should root and take off creeping across the soil in no time. 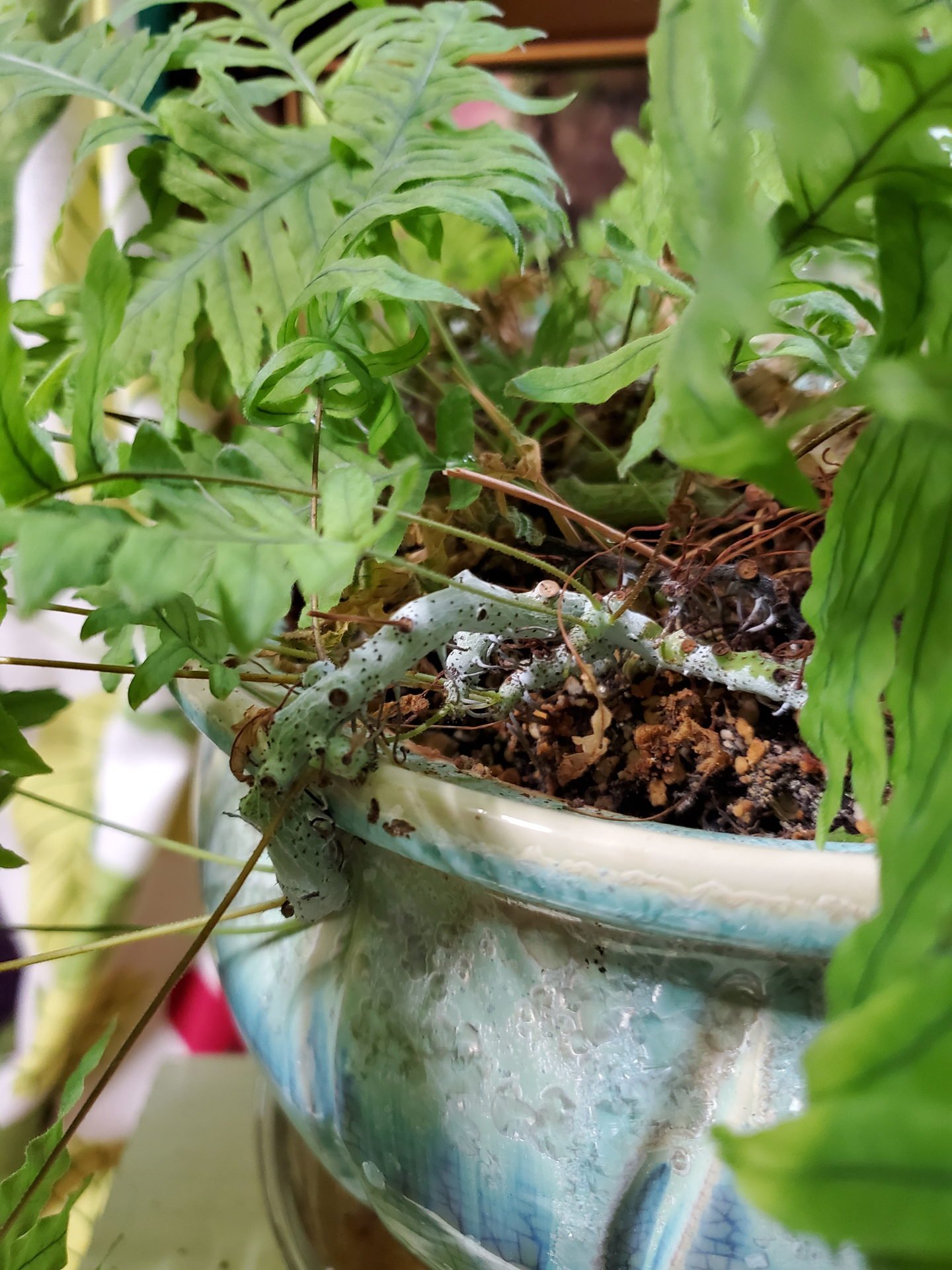 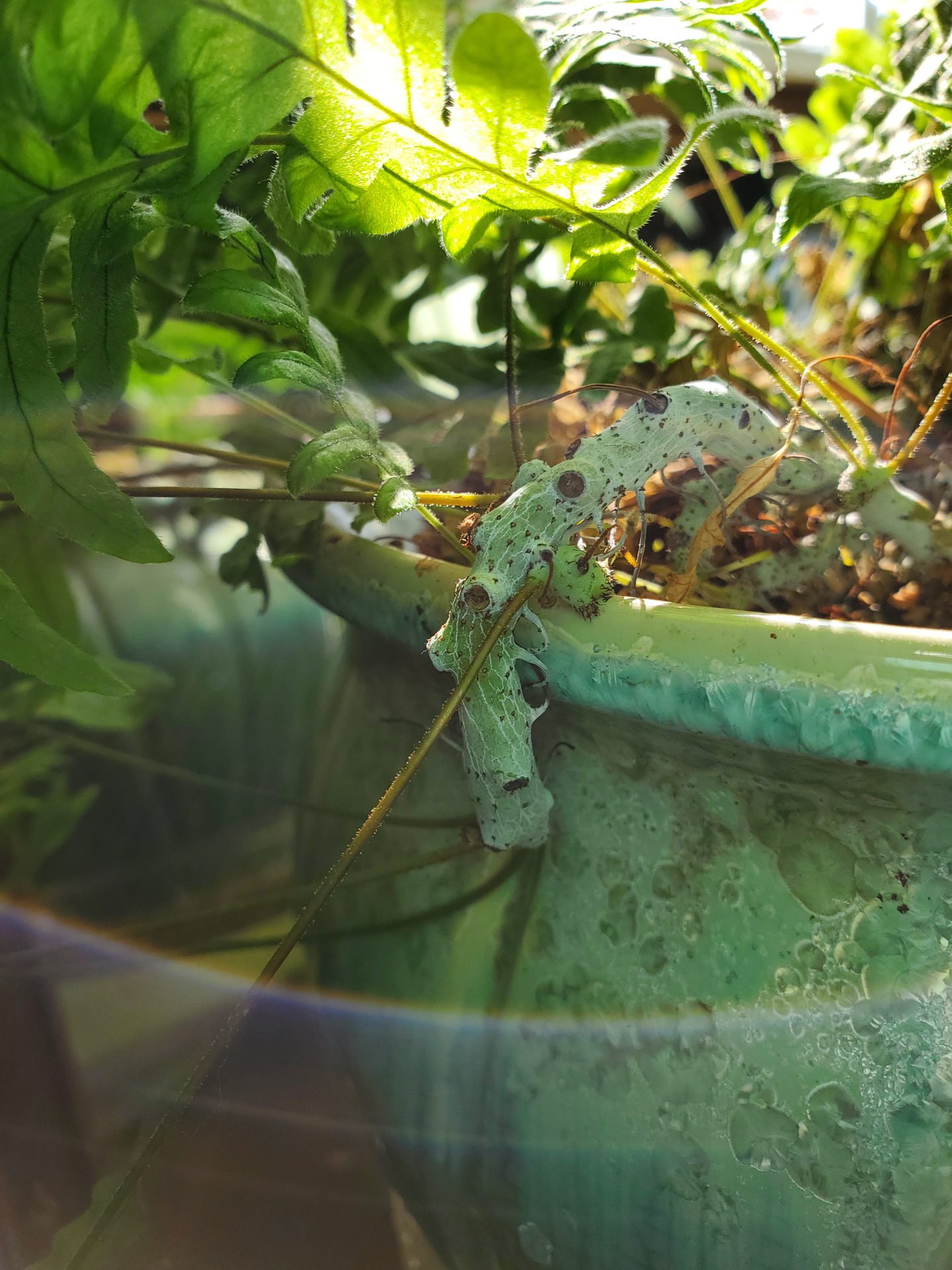 “Foot” creeping over the side of the pot 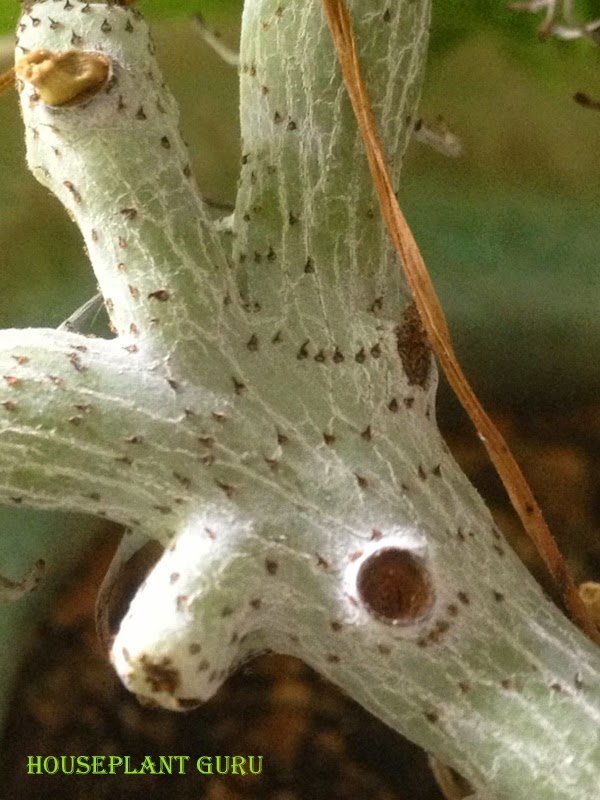 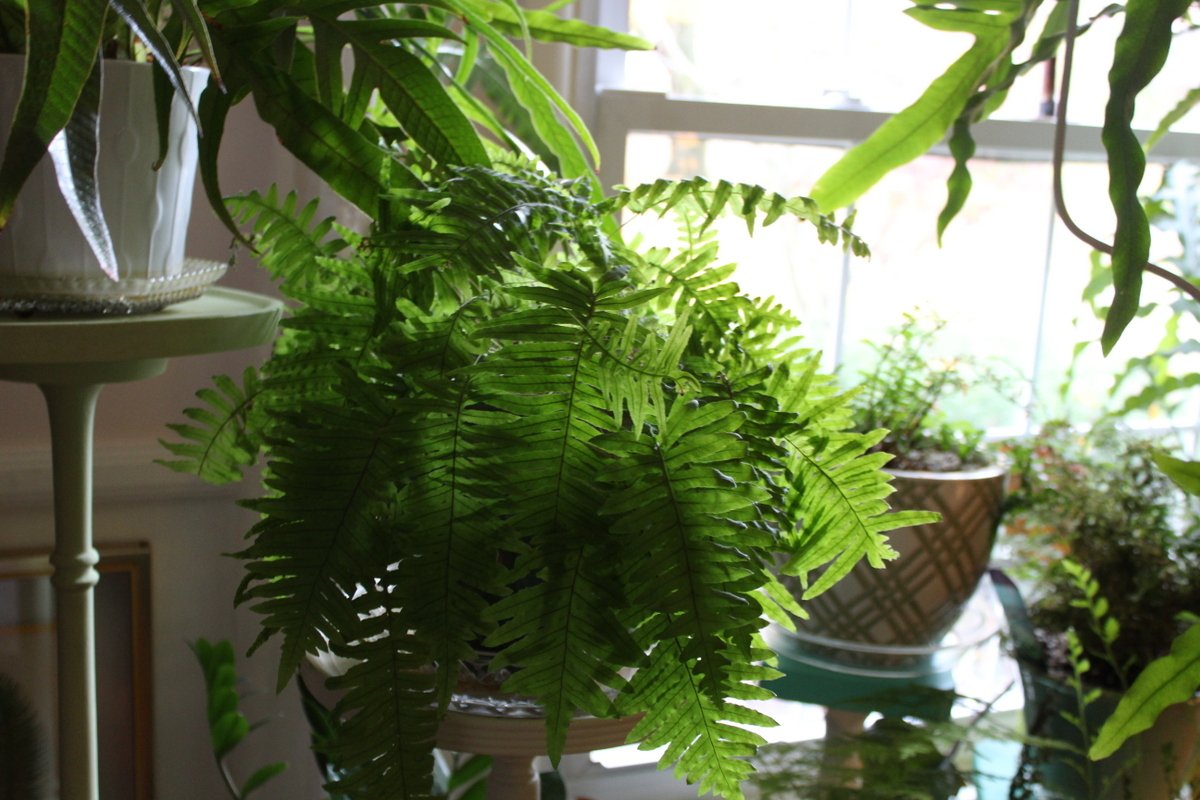 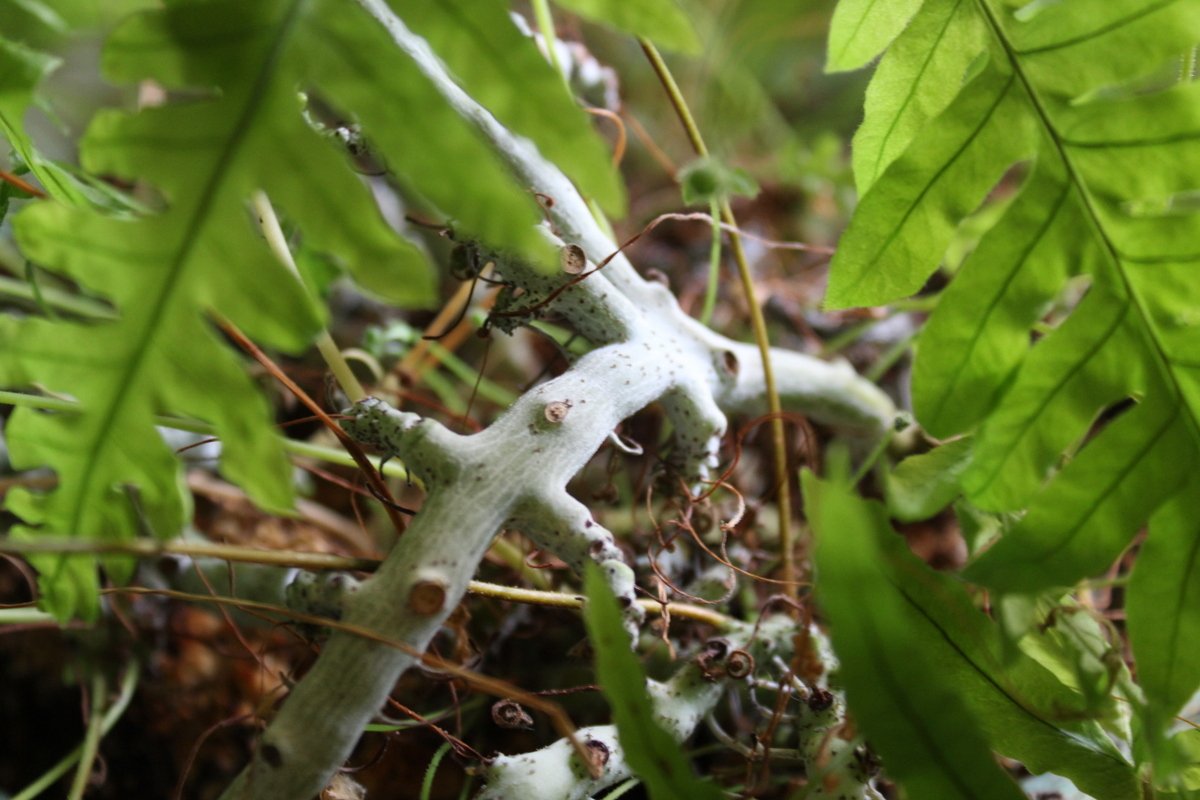 The caterpillar fern is also called the worm fern, the E.T. fern, and the naked rabbit’s foot fern. This is a good example of why the Latin name should always be used to identify your plants. These are four names for the same plant and there may be more. If I identify it by using the Latin name, Polypodium formosanum, there will never be any question about which plant I am referring to.

The plant below is the kangaroo fern, or Microsorum diversifolium. 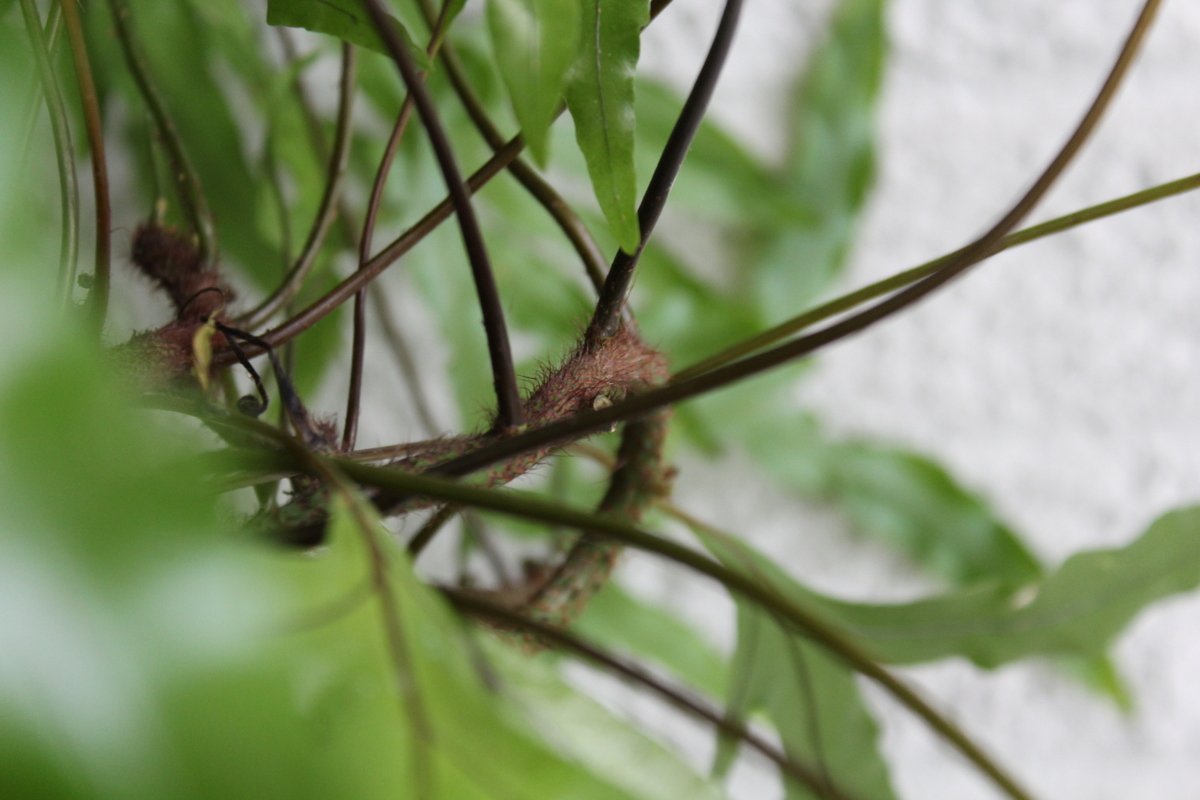 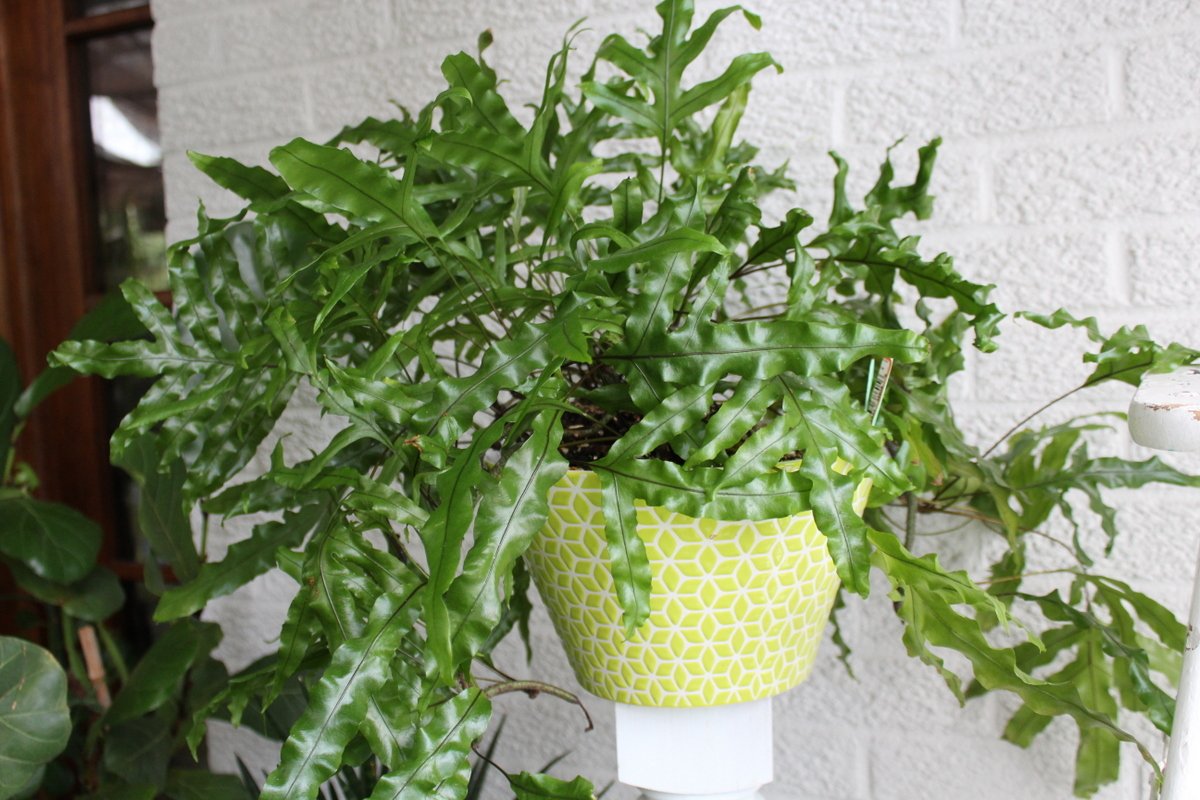 Below is my bear’s paw fern, Phlebodium aureum. I had to move furniture and move it out of the window so I could get a picture of it. It is really a large fern and I love the huge “paws”! 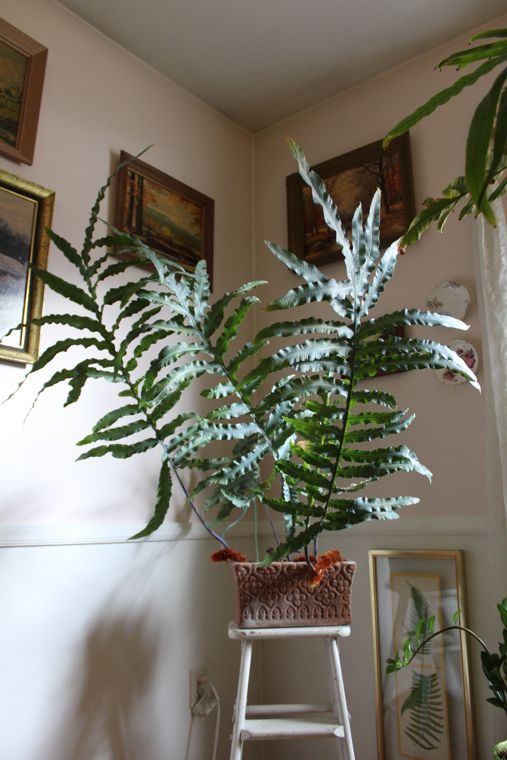 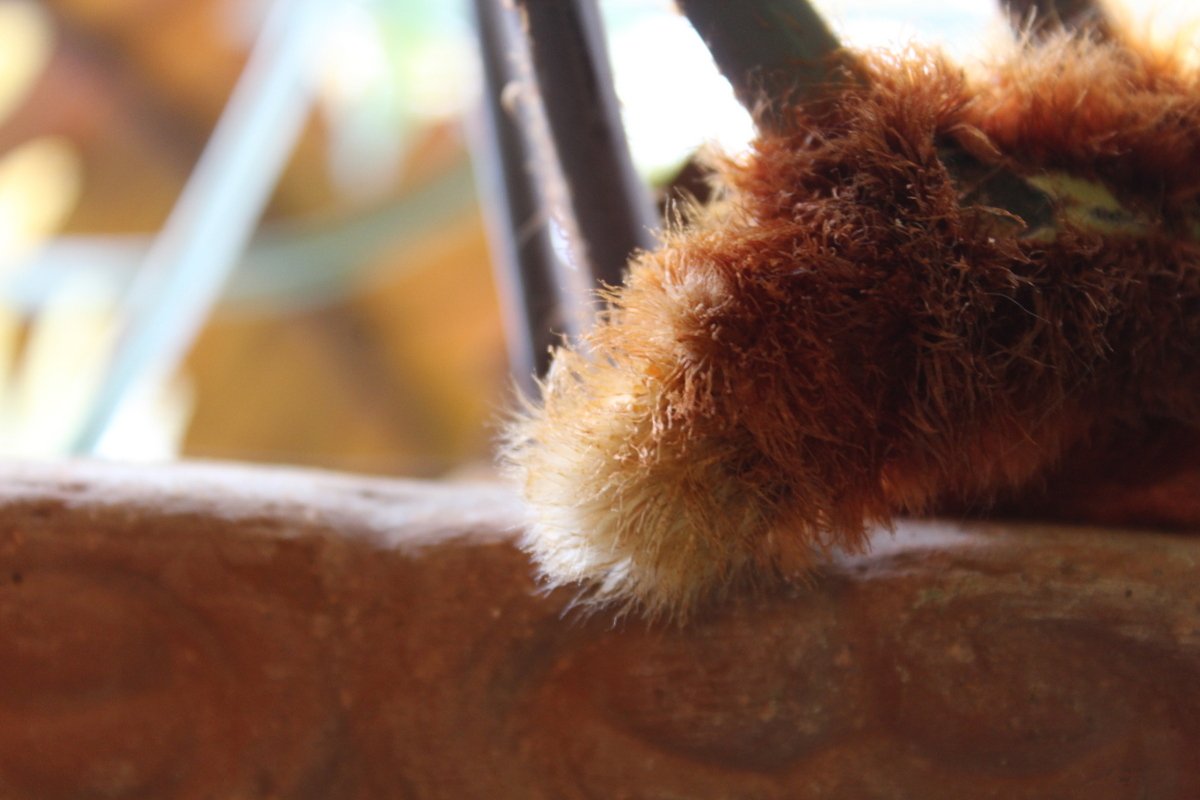 Up close of large foot 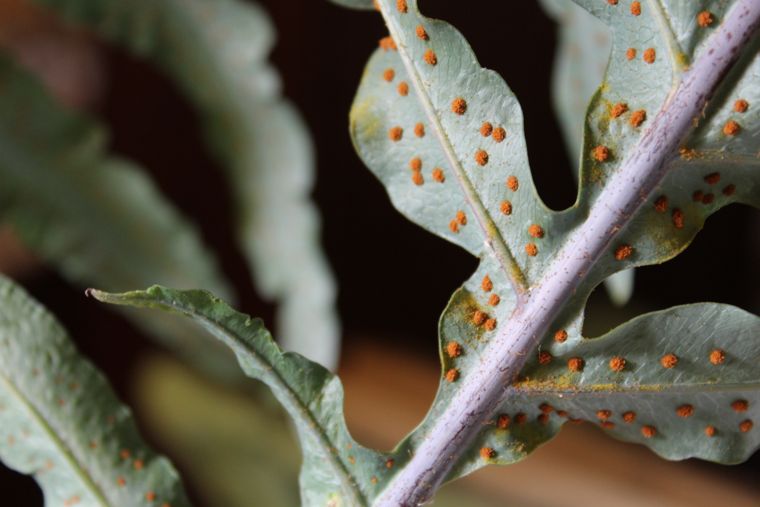 spores on the back of my bear’s paw fern 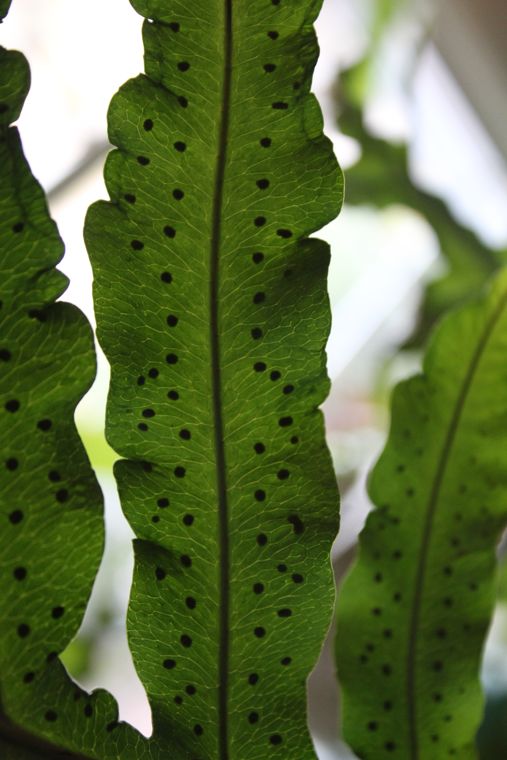 The spores throught the leaves

The footed fern below is the blue star fern, Phlebodium aureum mandaianum, a much smaller version of the above fern. 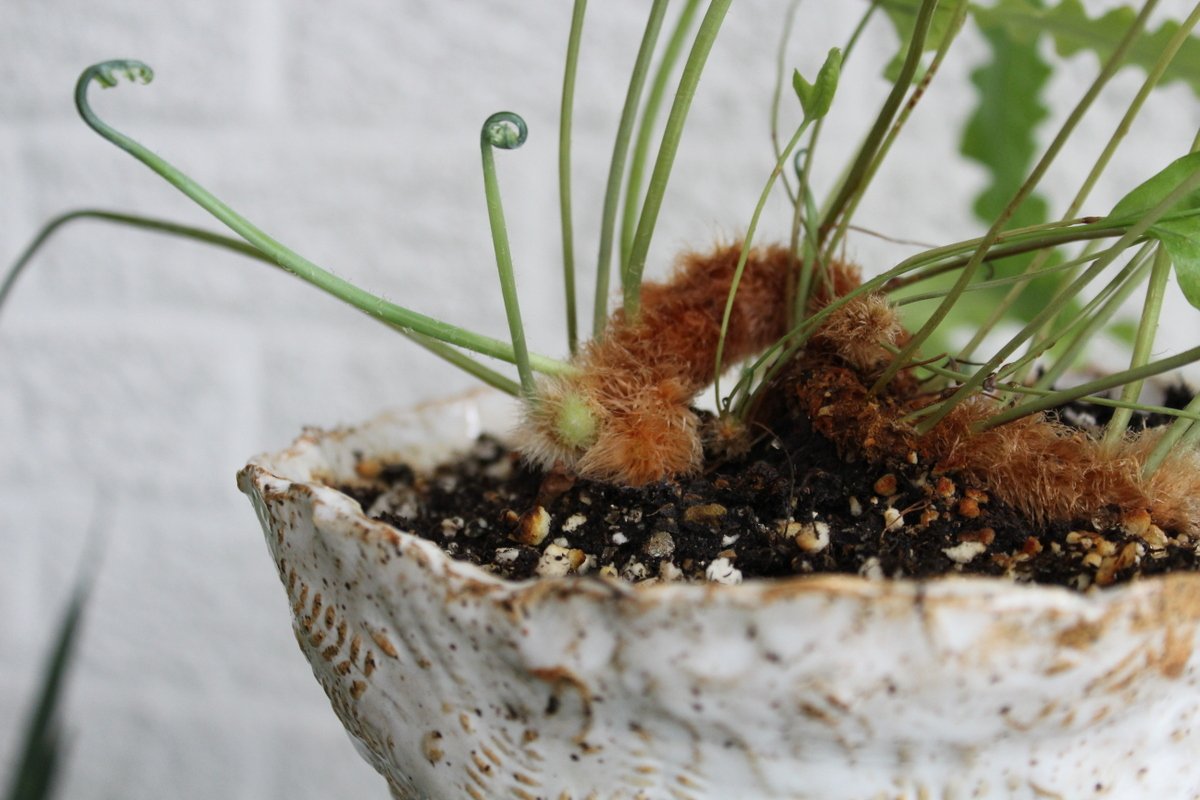 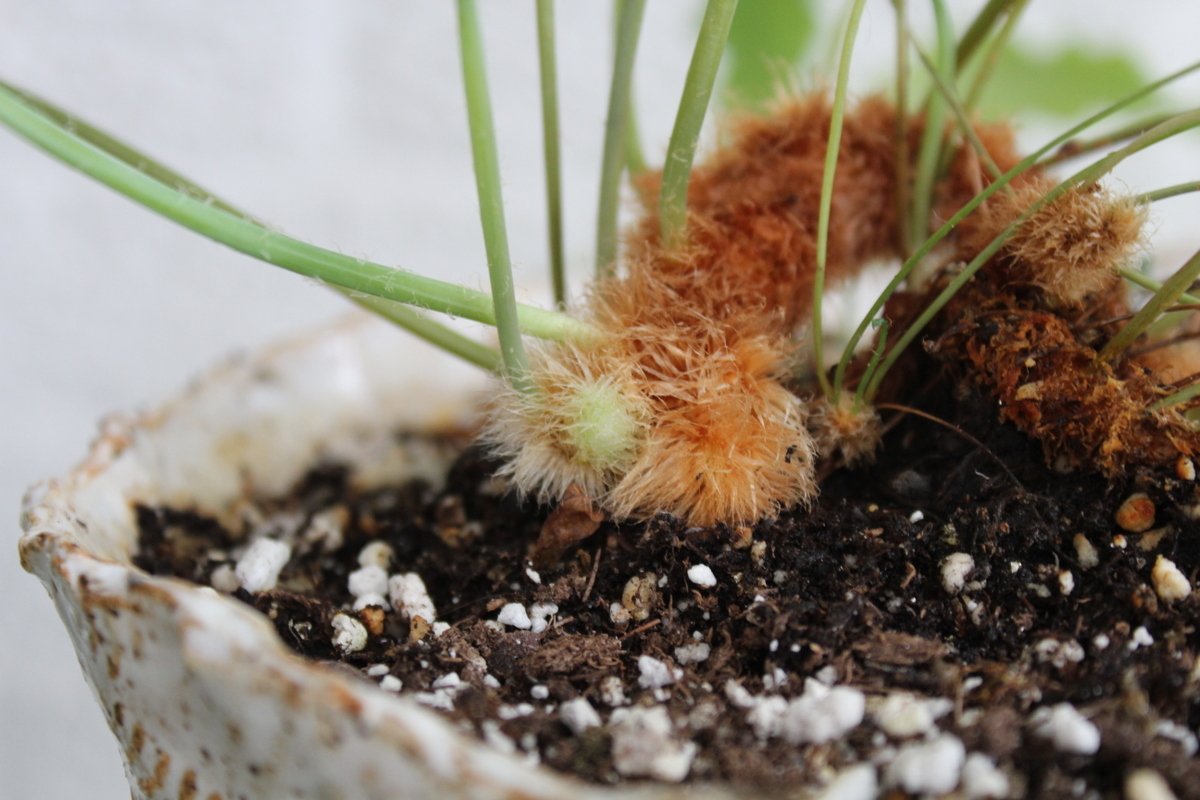 Try one of these unusual, interesting ferns. They aren’t your run-of-the-mill ferns and they can be a real conversation piece. They are great plants for children also as they can’t help but be interested in fuzzy, wormy-looking plants. Who wouldn’t be? Do you have a “footed fern”?