Why Do These Cacti Have to Be Grafted? 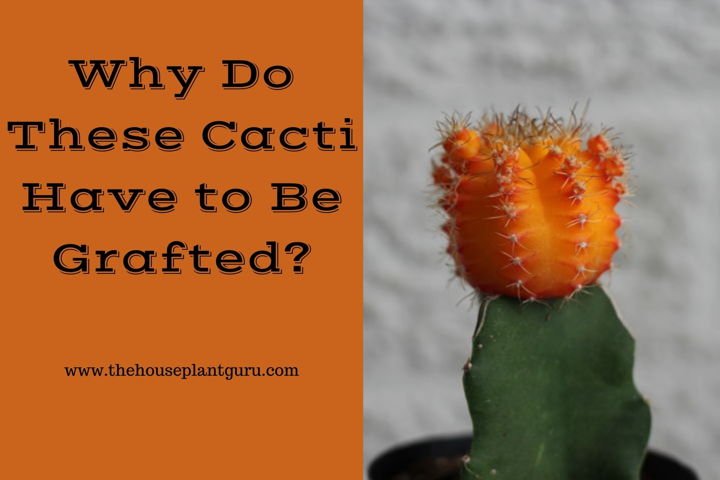 How many of you have bought one of these adorable moon cactus? I think they are so cute. I remember when my daughter was younger, she had a bright pink one. They are cute, weird, and irresistible, right? So why are they sitting on top of a green stem? They are grafted cacti. 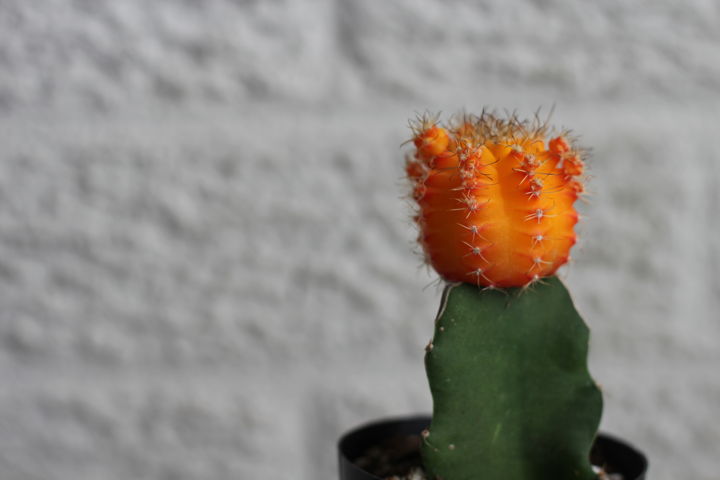 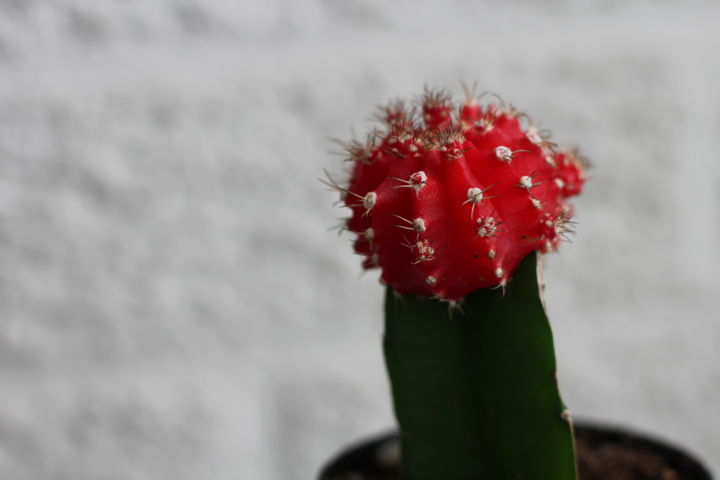 So why do these cactus need to be grafted and what is grafting? Grafting consists of taking two different plants and “fusing” them together. When they are combined correctly, they fuse together and grow as one. In the case of the moon cactus, it is a colorful Gymnocalycium mihanovichii which is the scion, or top part of the graft. The understock is usually a Hylocereus undatus (dragon fruit) or some other type of hylocereus. When grafting cacti, you have to make sure you have two cacti, not a cactus and a succulent as they won’t graft together. 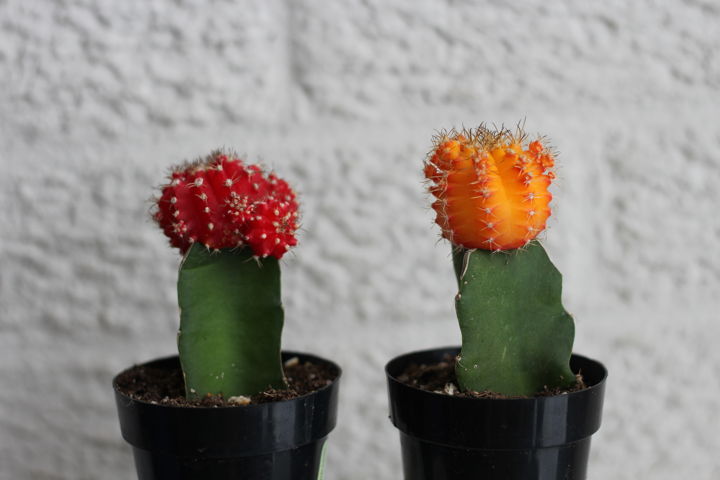 These colored gymnocalycium cacti have no chlorophyll

The reason the colored gymnocalycium need to be grafted is simply that they can not live on their own. What do plants need to live? They need the sun or electric light to make their food and to do that they need to have chlorophyll present. As you can see, there isn’t any green color in the plants so they need to be grafted onto a green plant that can make food for them. This small gymnocalycium below (less than 2″ across) is a green form and can photosynthesize for itself. I won this at the Michigan Cactus and Succulent Society meeting raffle table, it was grown from seed, and I love it. 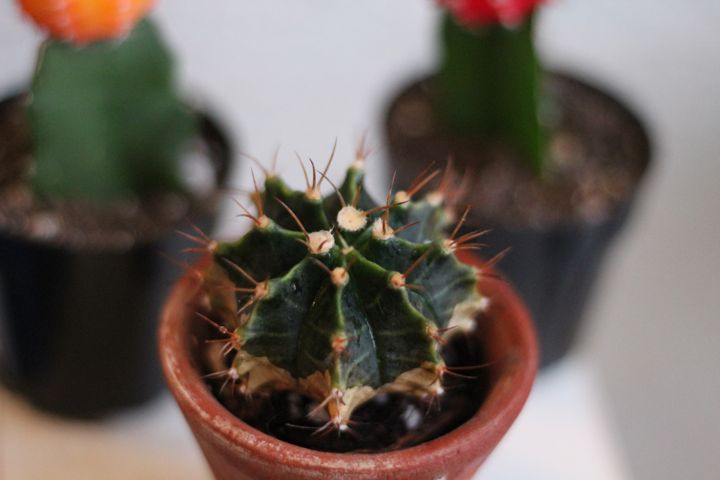 A Gymnocalycium that can photosynthesize on its own (I just watered it. It isn’t honeydew.)

When the Graft Fails 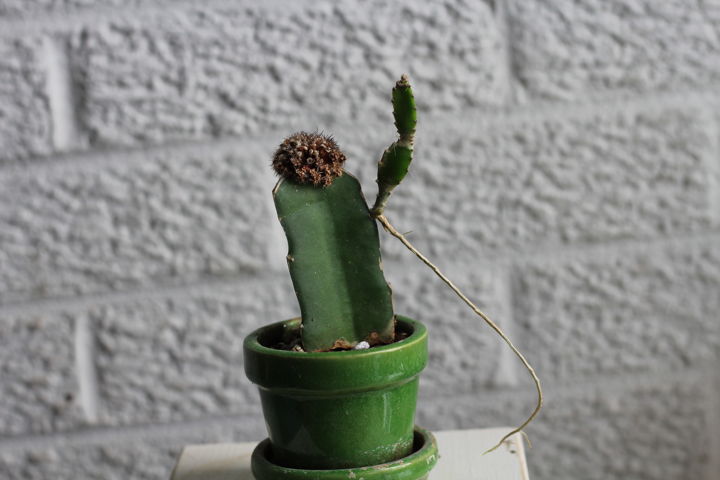 This grafted cactus top has died 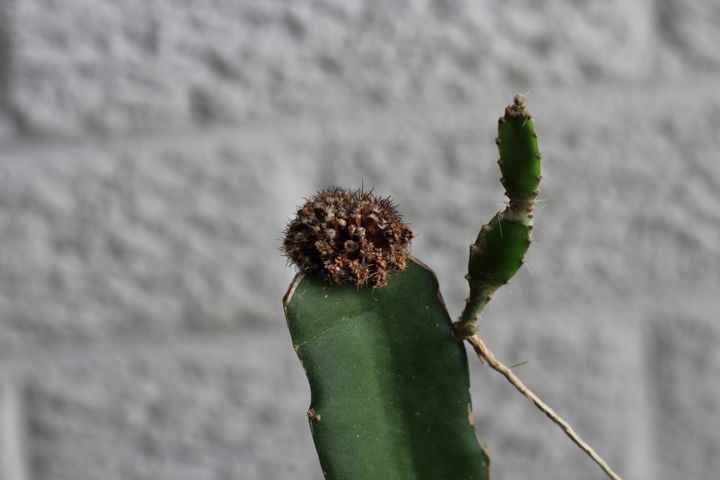 The graft obviously failed on this moon cactus above. What happened? I have no idea. Maybe the graft didn’t take. The bottom grew faster than the top and it broke the graft?  I’m guessing. This half-dead plant has been hanging out in my bathroom for some time now. When the colored gymnocalycium died, I decided to let the understock grow since it was/is still alive. (Yes, I have a hard time throwing plants out even when it’s time.) But, low and behold, look at that new growth! It decided to send out an arm. If the top cacti (scion) was still living and the bottom understock sent out new growth, it would need to be cut off as it takes energy away from the grafted cactus and as it is a stronger grower, could take over.

This Euphorbia lactea cristata variegata below is almost pure white and is grafted onto a Euphorbia nerifolia, or sometimes E. canariensis or E. resinifera are used instead. Because the top euphorbia is so white, it does better grafted onto a plant with more photosynthesizing abilities, and since they are both succulents, they are compatible. 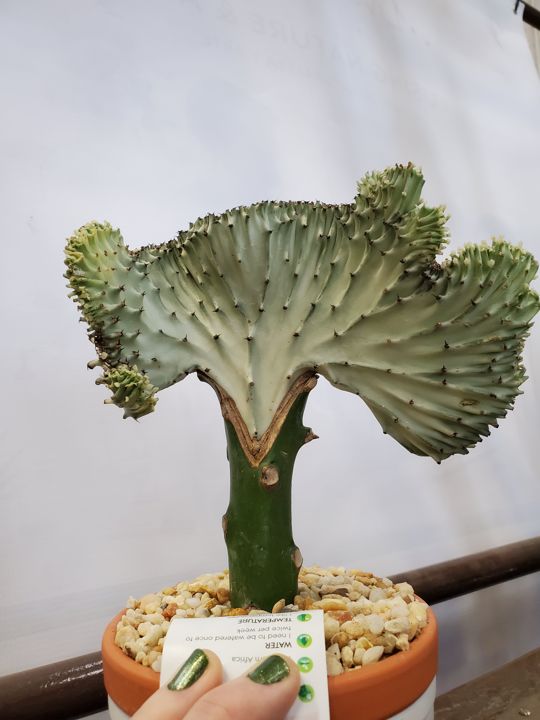 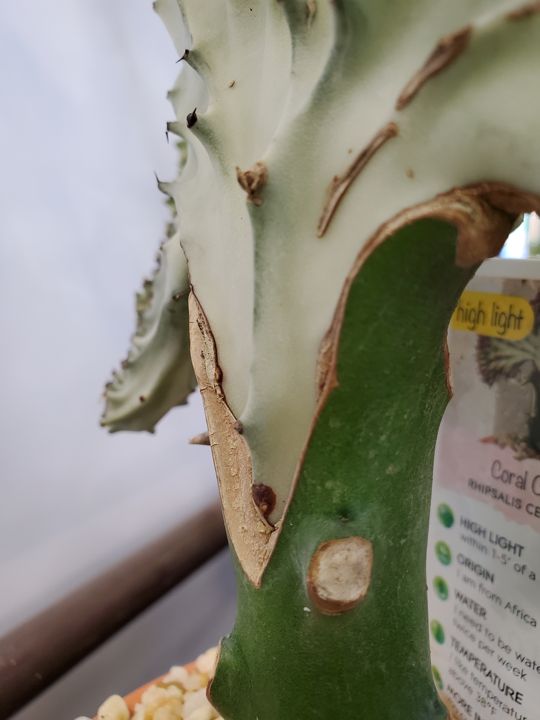 The graft up close 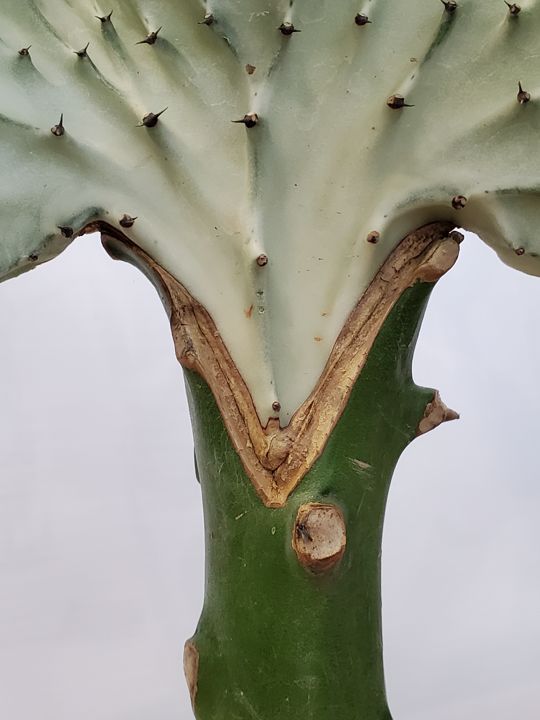 The graft up close

Isn’t nature amazing? Who figured out a non-photosynthesizing plant could be grafted to a green plant that could photosynthesize for it? If you would like to find out more about grafting cactus, check out my book Houseplant Party where you can learn how to graft your own.