Did You Know the Drainage Hole Can Be a Problem? 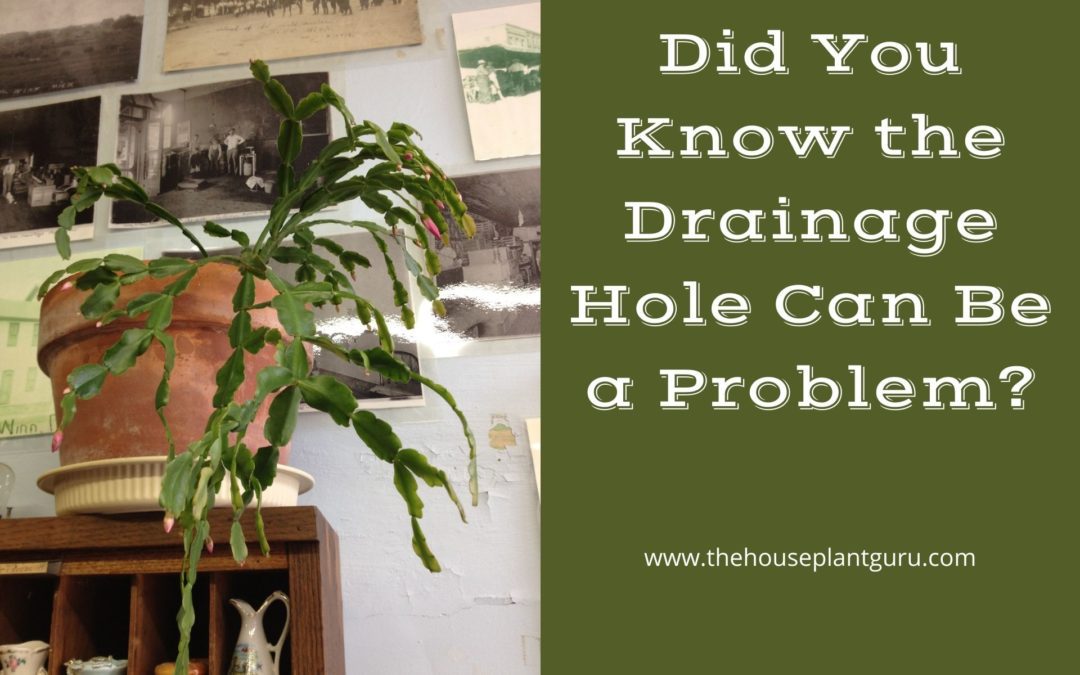 If you read my blog you know I am a huge proponent of having a drainage hole in every container. It is easy to drill one with a diamond-tipped drill bit and is a must, in my opinion. If you are using a pot without a drainage hole, I suggest using it as a cachepot that is a receptacle for the grow pot instead of potting it directly in the container. We’ve established a drainage hole is necessary, so how can it also be a problem?

There is a small town near where my parents used to live and I would frequent it when I went home. I of course, noticed the beautiful holiday cactus (Schlumbergera) right away. Pictured below is the shop owner’s large, old Thanksgiving cactus. It resides near a large plate glass window. My parents used to go to dances in this old building way back in the 50s. Look at the tin ceilings! 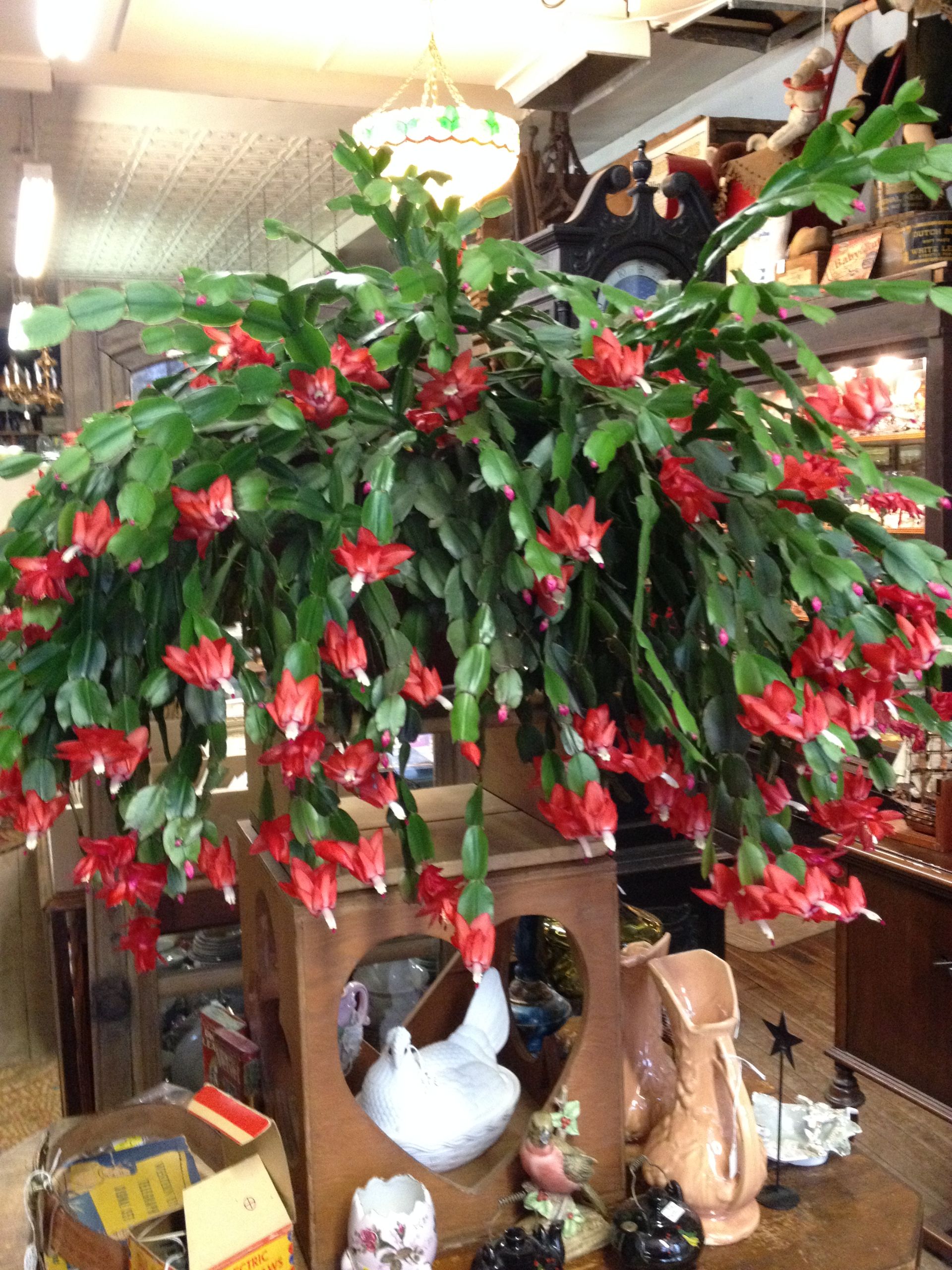 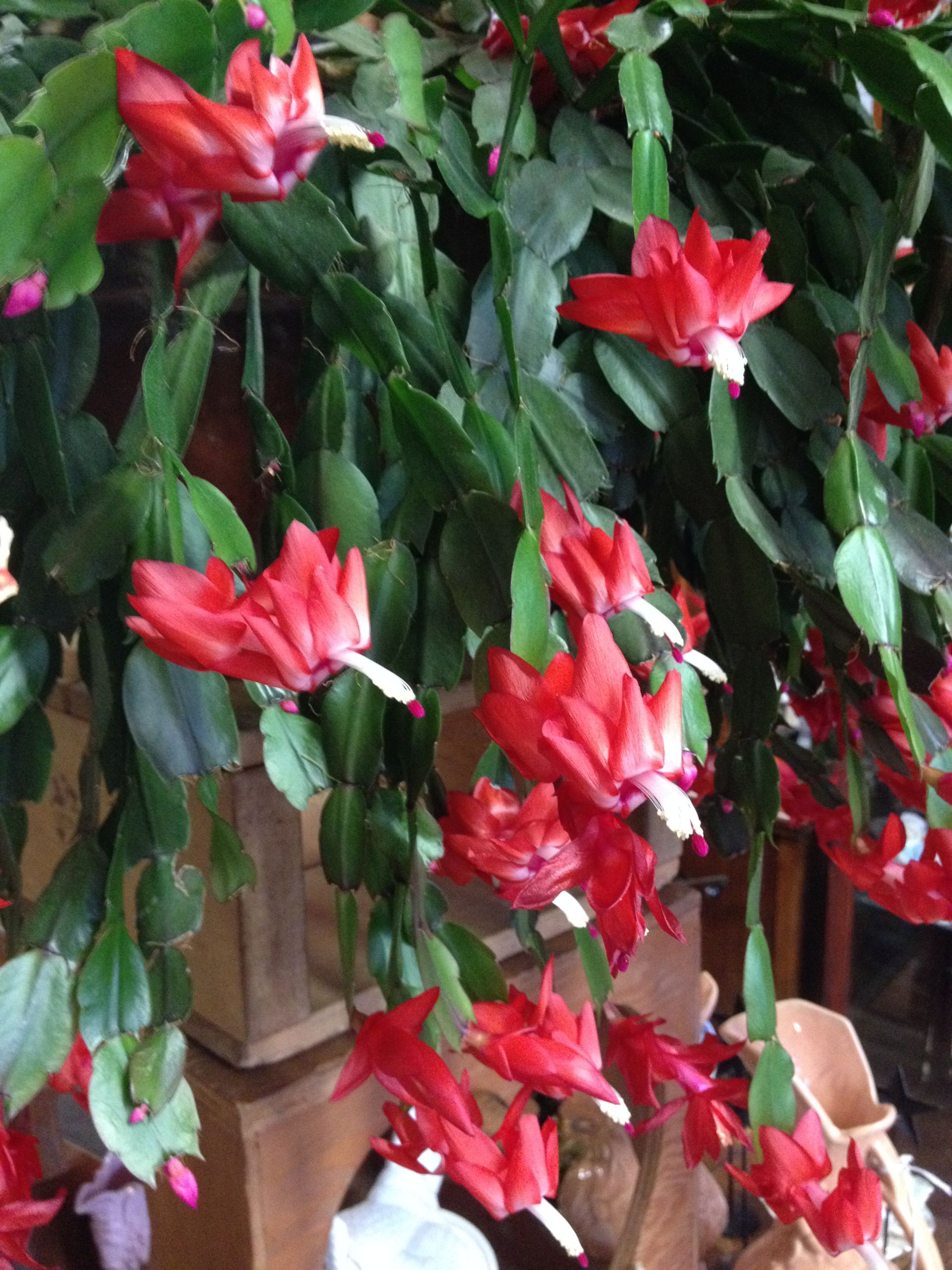 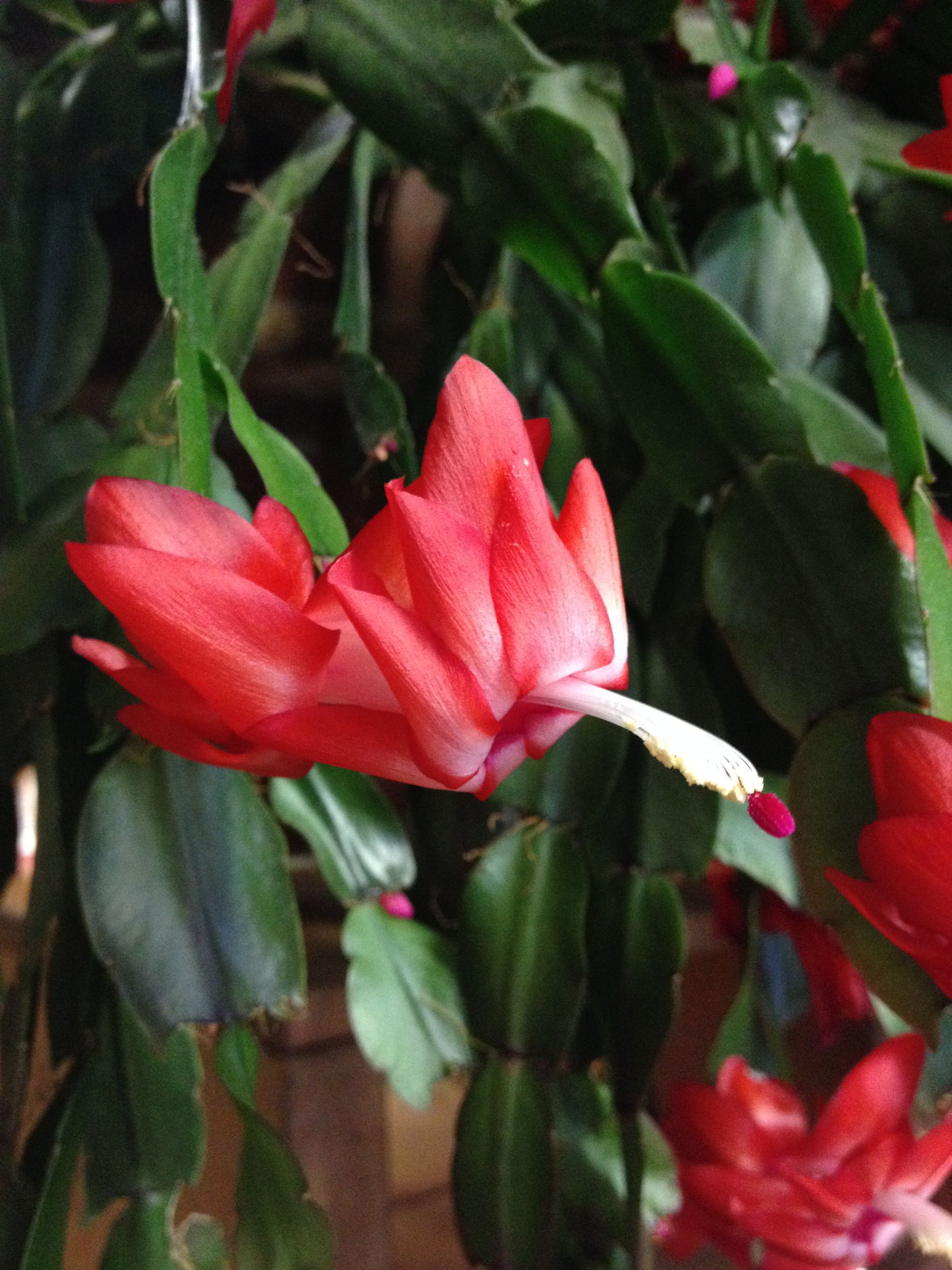 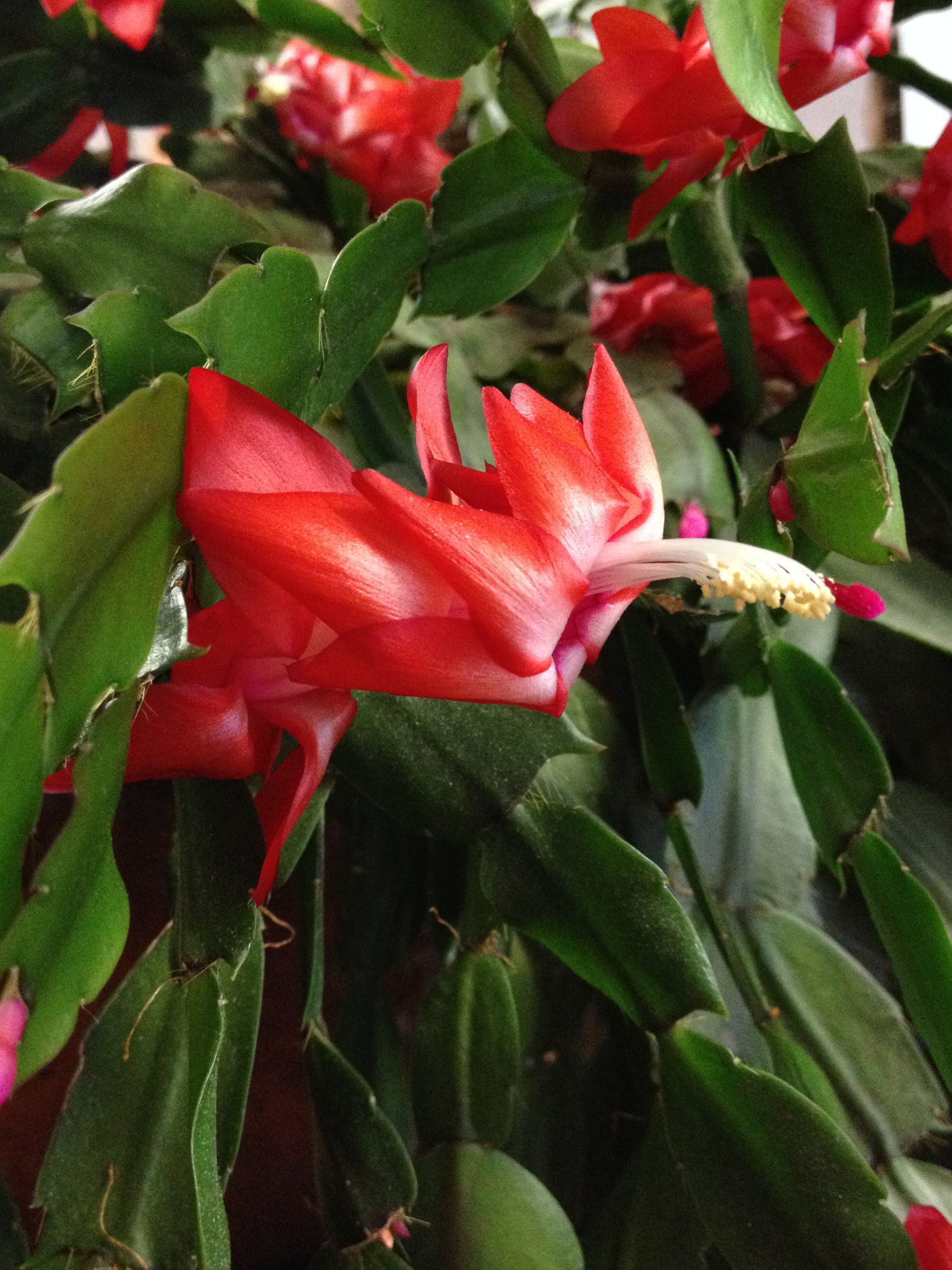 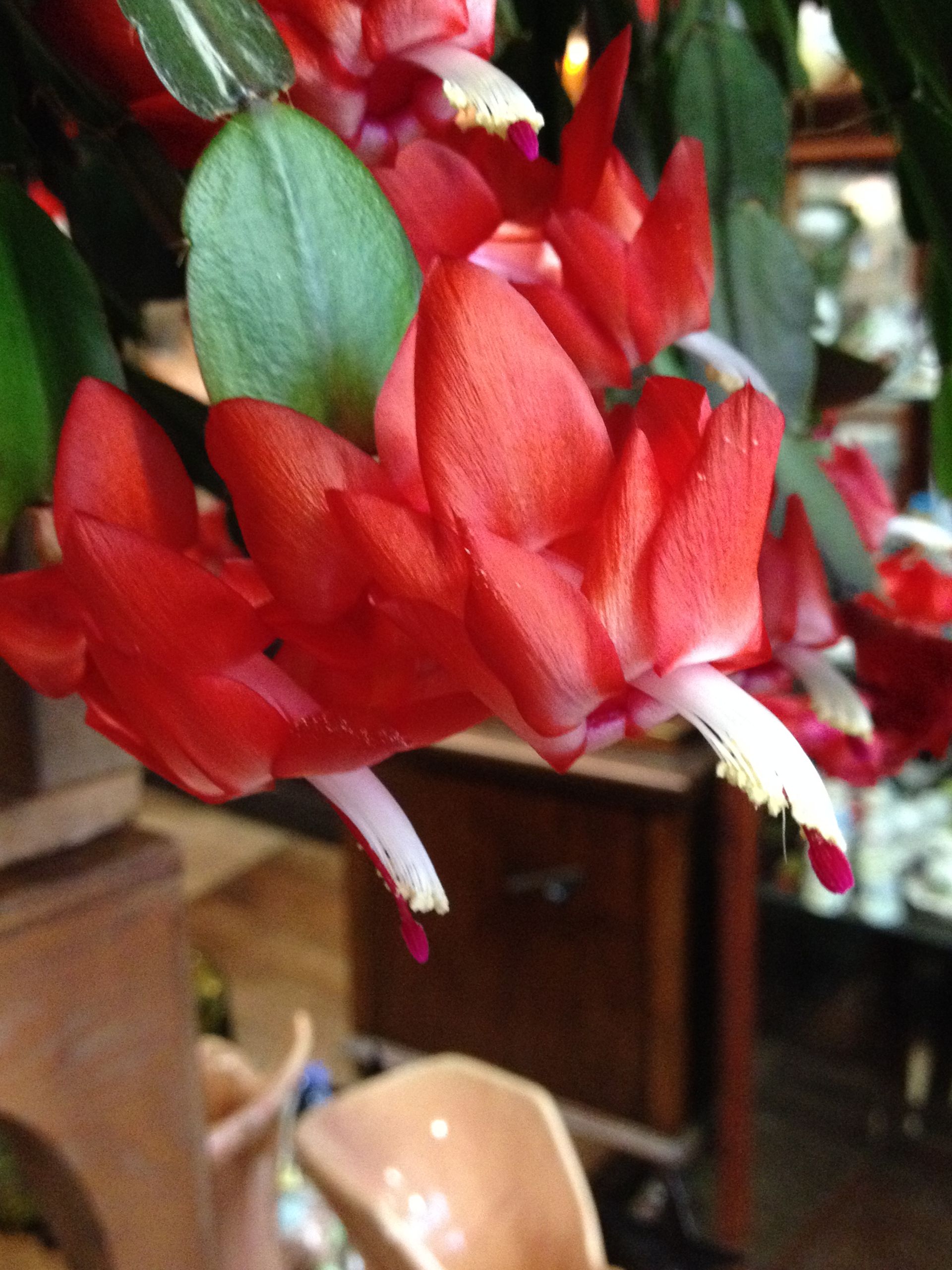 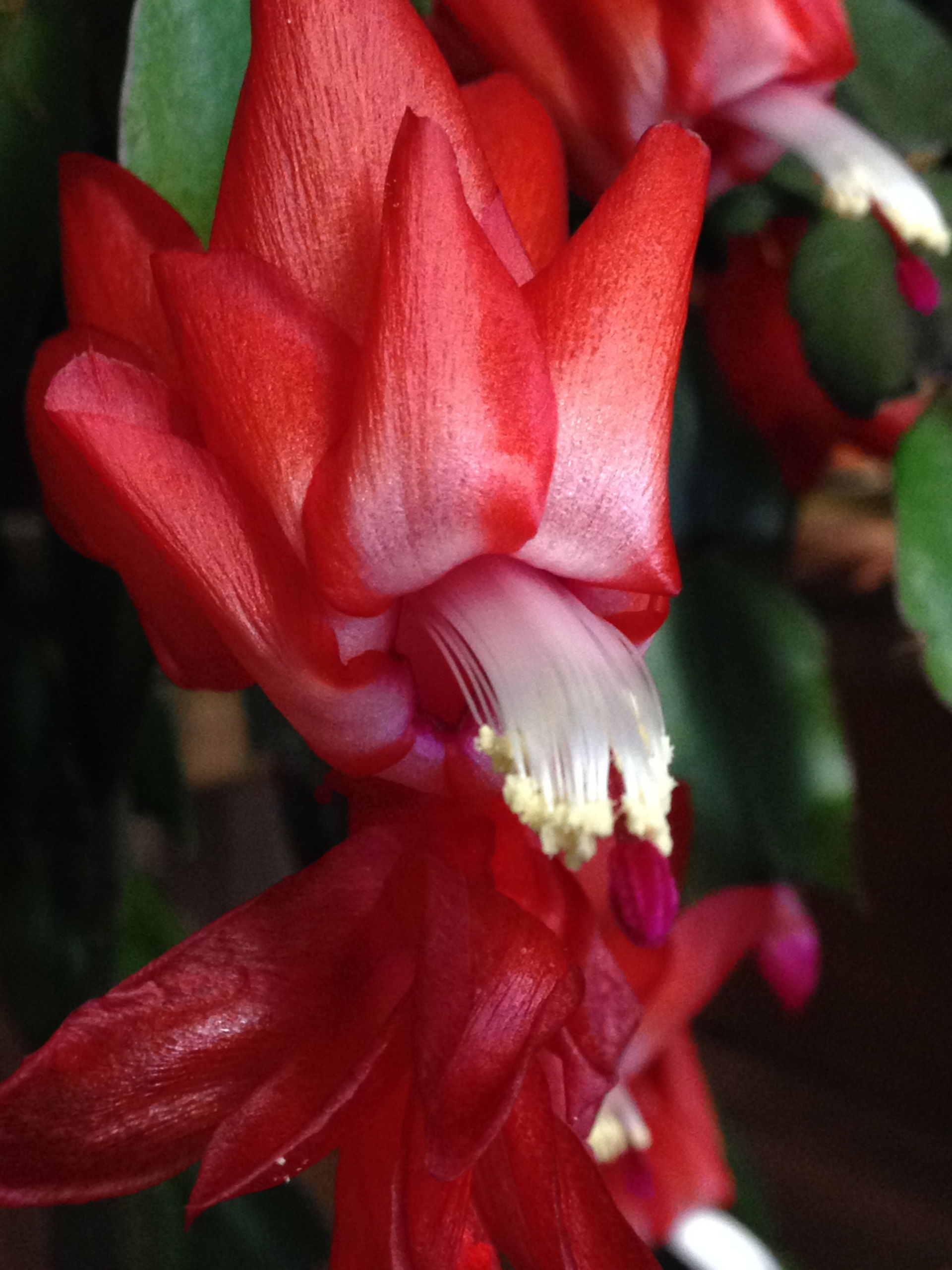 Below is what is left of the owner’s previously enormous true Christmas cactus. What happened? 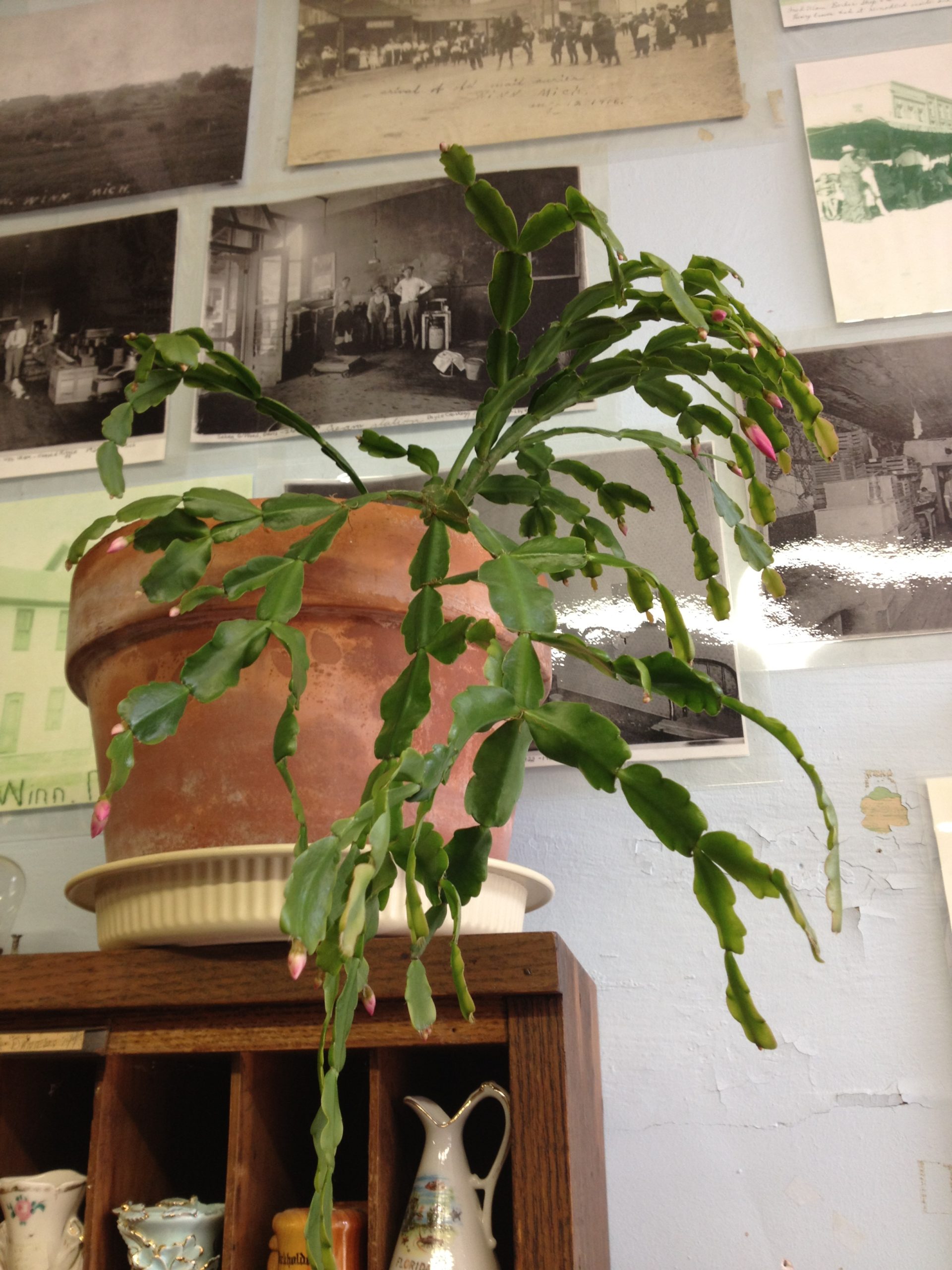 I obviously asked, because even though I don’t have a picture of it before, (this is from 2012) I had seen it and was shocked by the difference. The owner of the shop said his cactus was old and enormous until last year (2011) when he noticed it was dropping a lot of its stems. When he investigated the container, he found that the drainage hole had become blocked and the plant was waterlogged. Often when we have heirloom plants and they are doing well, we leave them alone. I did the same thing with my fern that is an heirloom. I was afraid to disturb it because I was afraid it might die.

This is a hard lesson for any plant owner to learn. Why did this happen? A couple of things could have been the problem. Either the roots filled the hole, or the salt buildup from fertilizer and minerals from water accumulated and eventually blocked the hole. This building is in a small rural town and so there is no “city” water. Well water can have a lot of minerals in it that can leave a residue behind. It is always a good idea, especially with very old plants, to check the drainage hole occasionally and make sure it is free of roots and salt build-up.  Luckily, after letting it dry out and re-potting it, the store owner saved his plant.

Below are examples of that crusty build-up on a pot. We own a garden center and someone brought me a hoya to repot. It had been in this McCoy pot since the 50s! It was all roots and really no potting medium was left. I cleaned the pot and actually repotted it into the same pot. If you have this “crust” on your pots, soak them in vinegar and it will be easier to get off. Sometimes a bit of “elbow grease” is also needed.  As you can see the soil line was about 1 1/2″ down and there was plenty of room to repot the plant back into the same pot. I was amazed at how small the root system was for such a large plant.  Hoyas like to be pot-bound and this one was doing great so I guess this one liked it just fine. It actually looked healthy, but the pot was another story, obviously. 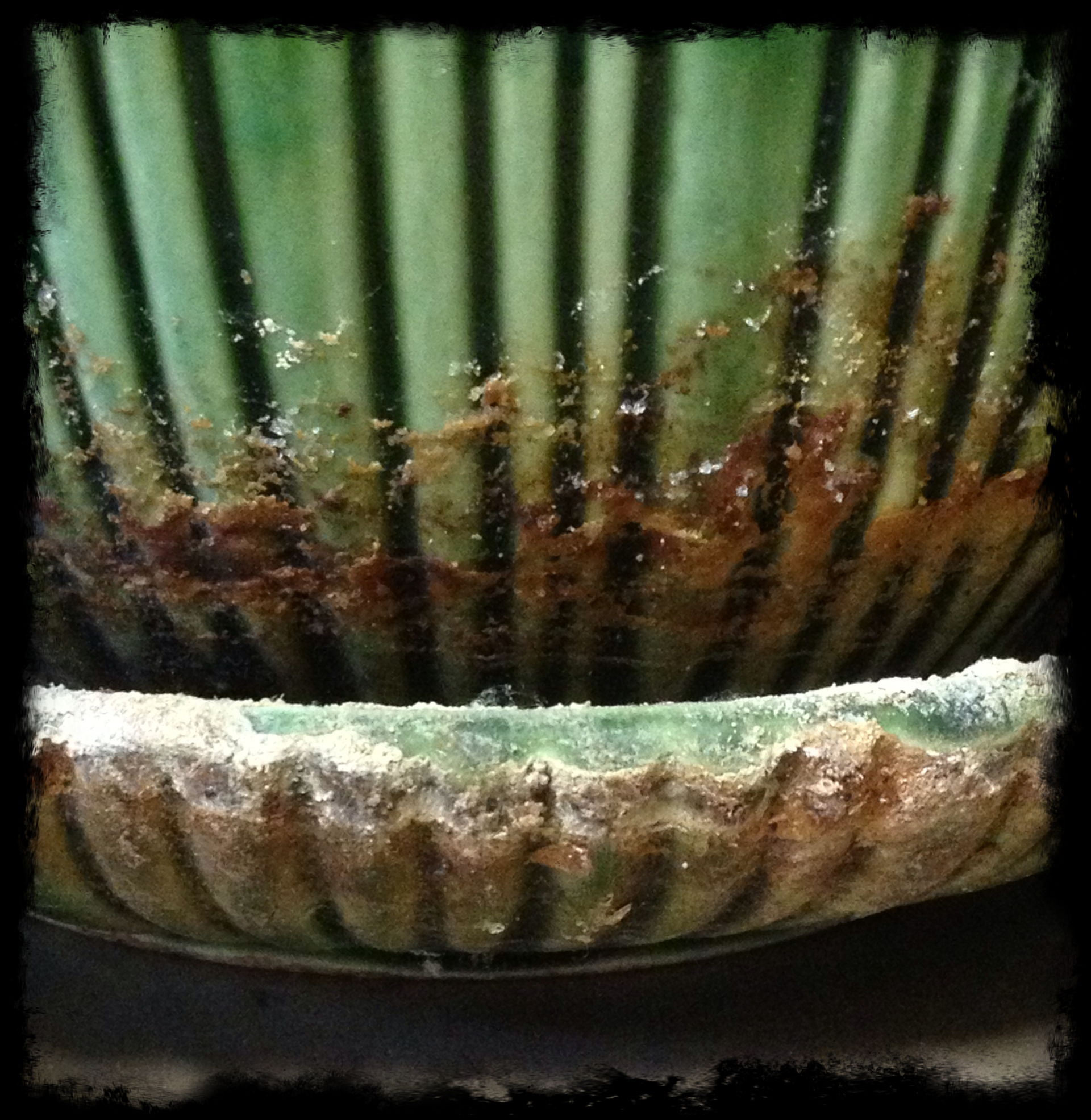 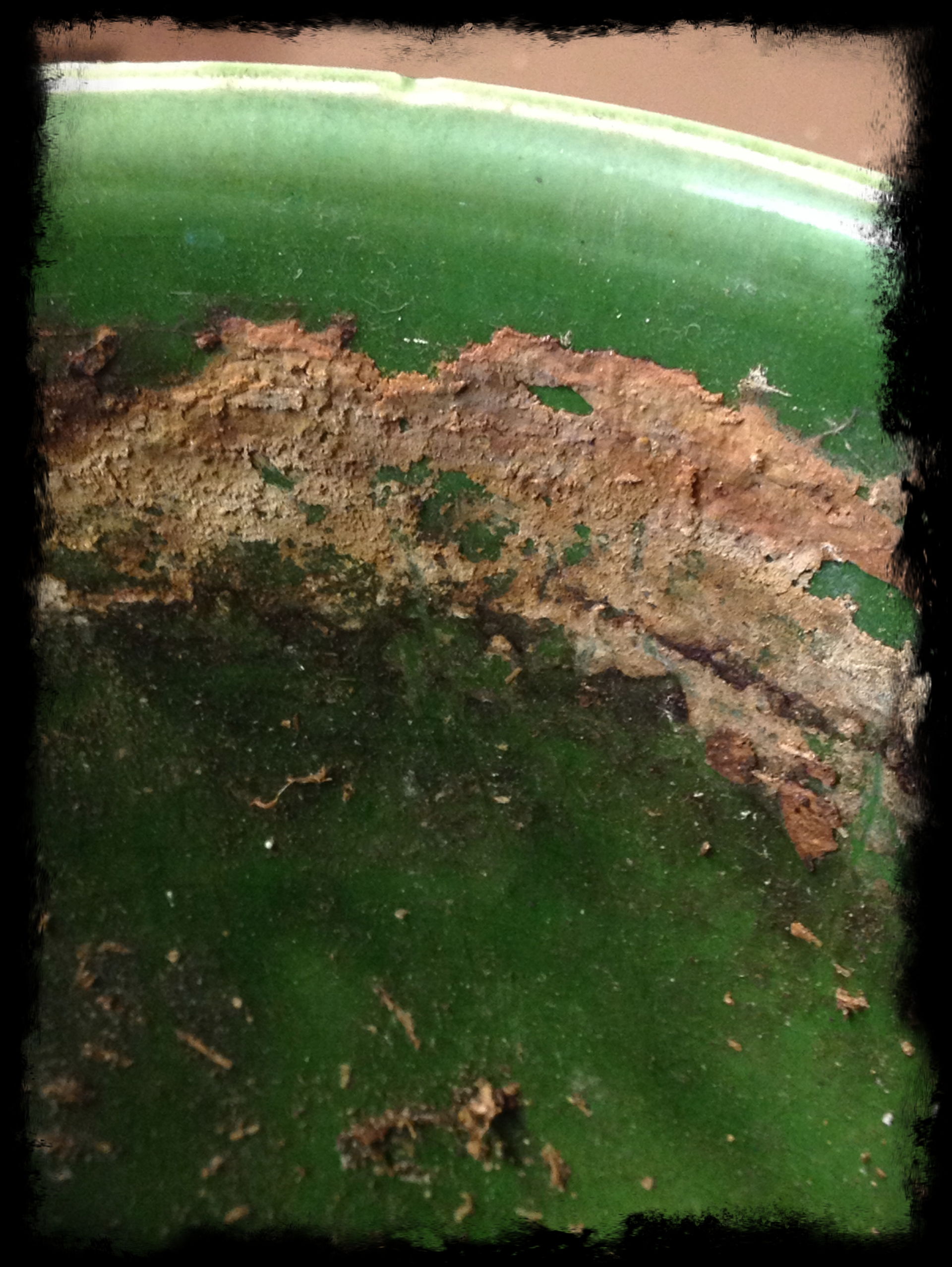 There is a crusty buildup inside the rim of the pot as well.

I hope this was helpful to you. At this time of year, I am seeing so many posts on Facebook and Instagram of HUGE, OLD holiday cacti and it made me think of this shop owner who almost lost an heirloom. These heirloom plants are so special and unique and it would be a shame to lose them. Check the drainage hole to make sure roots or salt mineral build-up aren’t causing a problem. If you have a problem with a plant and there is not obvious reason above the soil line, always check below.

Have a Merry Christmas!