How to Care for String of Dolphins 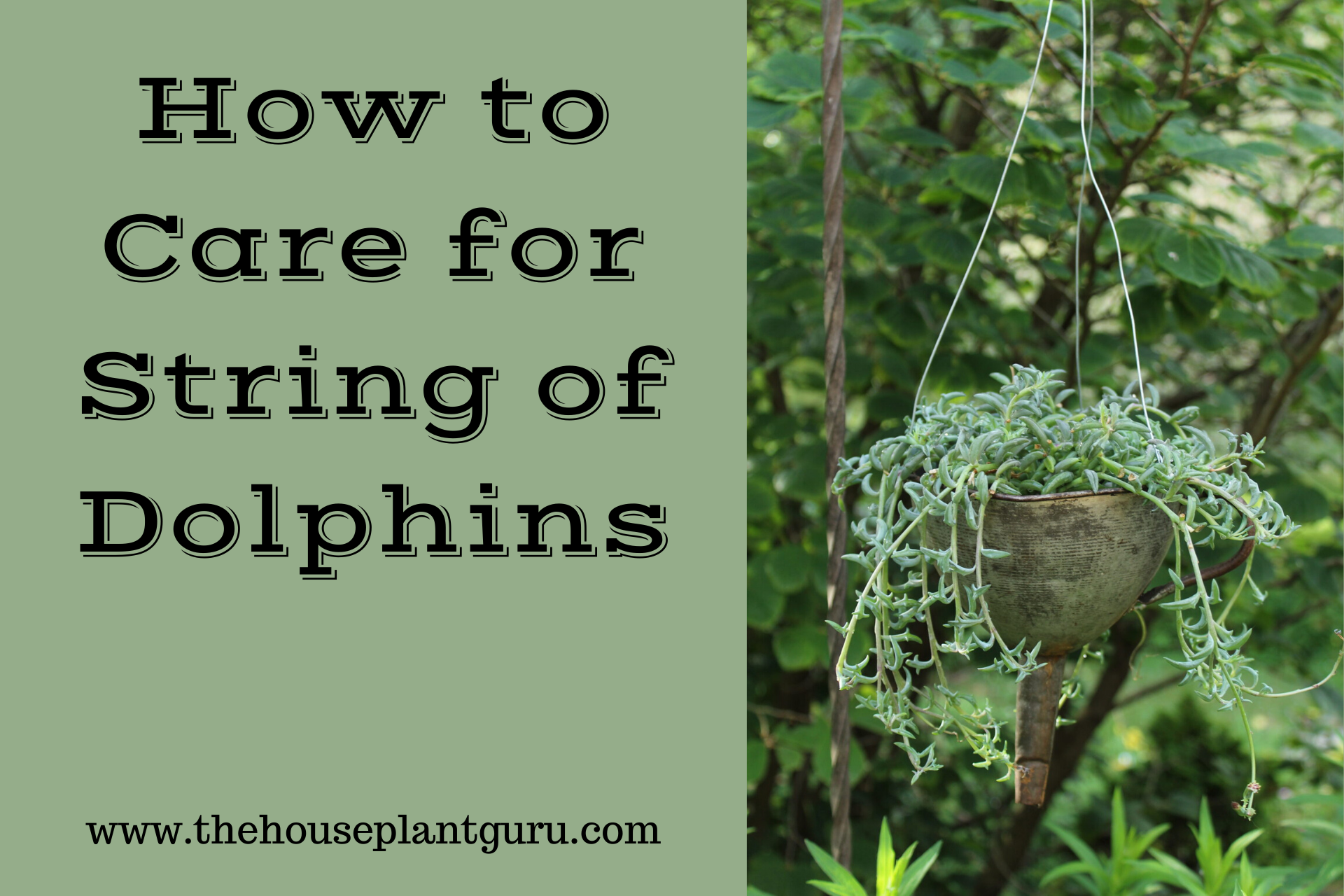 When the string of dolphins (Senecio peregrinum/ Dendrophorbium peregrinum) first came out, of course, I wanted one and finally found one last year. Unfortunately, it contracted a bad case of mealybugs. I tried to get rid of them, but it died. Soooo, here I go with another one. It is a bit beefier than the last one I purchased and today I re-potted it into a funnel planter. 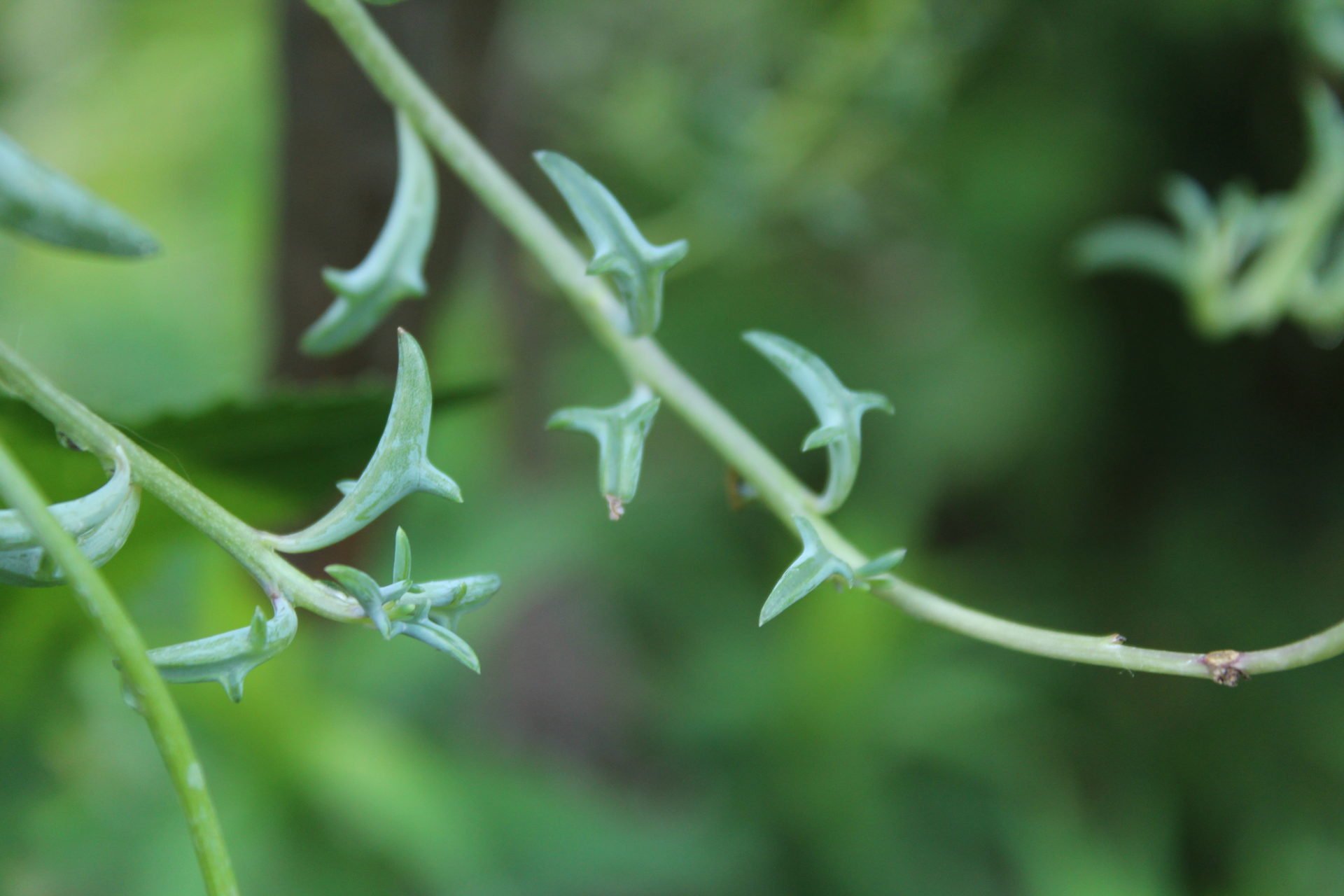 This plant is obviously named for the shape of its leaves.

I love old funnels and decided to use this one for the dolphins. I drilled three holes equidistance apart around the rim of the funnel using a small drill bit. The wire hanger is from an old hanging basket that I saved for just such an occasion. Read about using my dad’s funnel here. 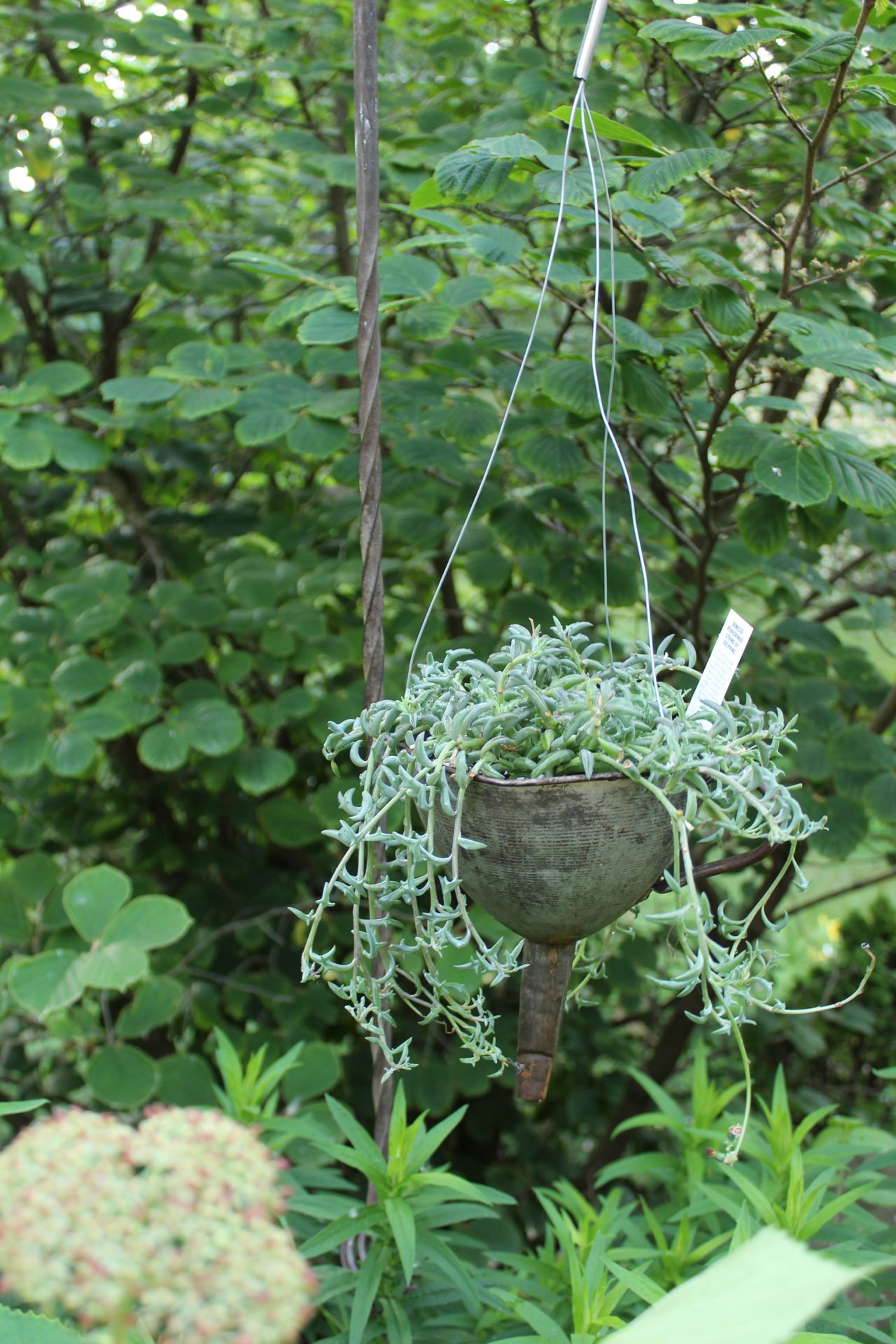 I planted it into an antique funnel

I used a fast-draining potting medium I mix myself which contains potting mix, coarse perlite, and vermiculite in approximately equal parts. Add a bit more perlite when making medium for cacti and other succulents. I planted it in the funnel, carefully working the longer tendrils through the wires. In retrospect, I should have added the wires after planting. Learn from my mistakes. The upside? I do have a couple of detached pieces that I can let callus over and plant later. 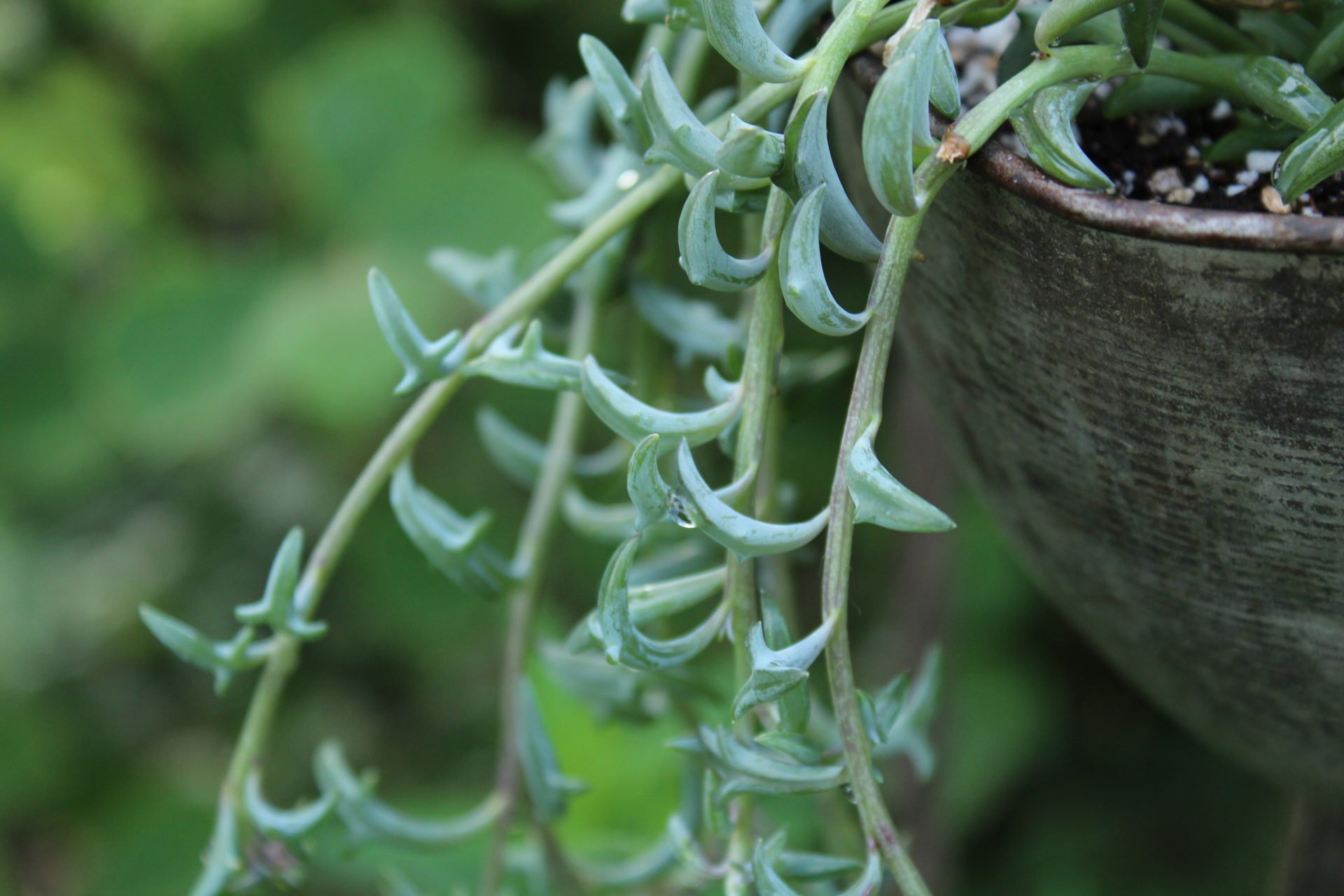 The leaves of this succulent are shaped like dolphins

I watered it in well and then won’t water it again until it is almost completely dry. In my experience with other “strings of”, they need as much sun as you can give them to keep them from elongating and the pearls, bananas, or dolphins from losing their plump shape. I’m going to hang this in my sunroom close to the south windows. Hopefully, the mealybugs will stay away and I will have a healthy “pod” of dolphins. I will probably give it some fertilizer throughout the summer. Maybe some fish emulsion will help keep it healthy. 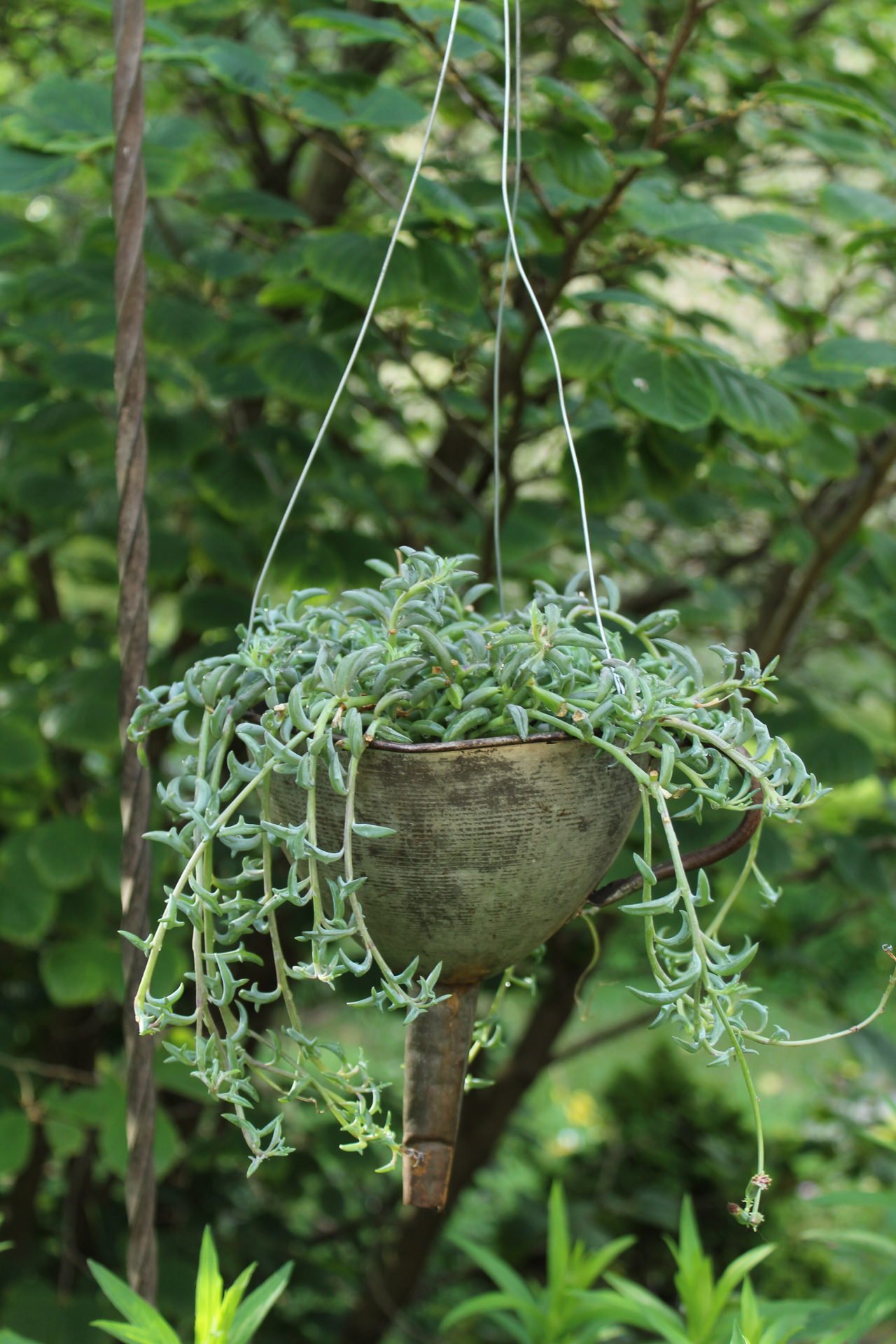 The string of dolphins in the funnel.

I noticed it had a flower (excuse the Henry the kitty hair). If your plant has the right light levels, it will bloom for you. It will need as much light as you can give it to get flowers. I hopefully will get them again, as this just came from the grower’s greenhouse. 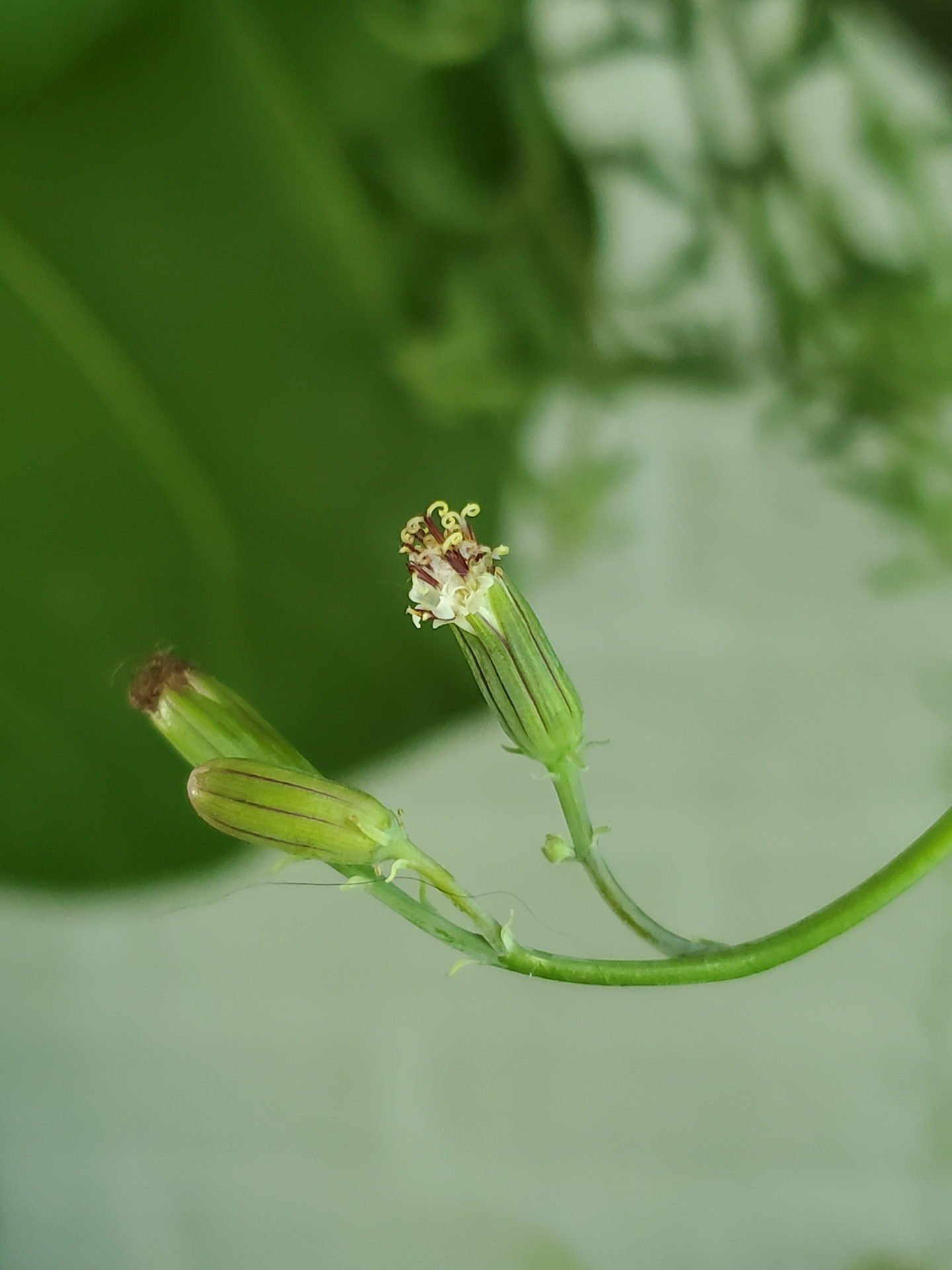 If they have enough light, they will bloom

Have you found a string of dolphins and how is it doing?

Have a great rest of the week!