How To Make A Moss Pole For Your Houseplants 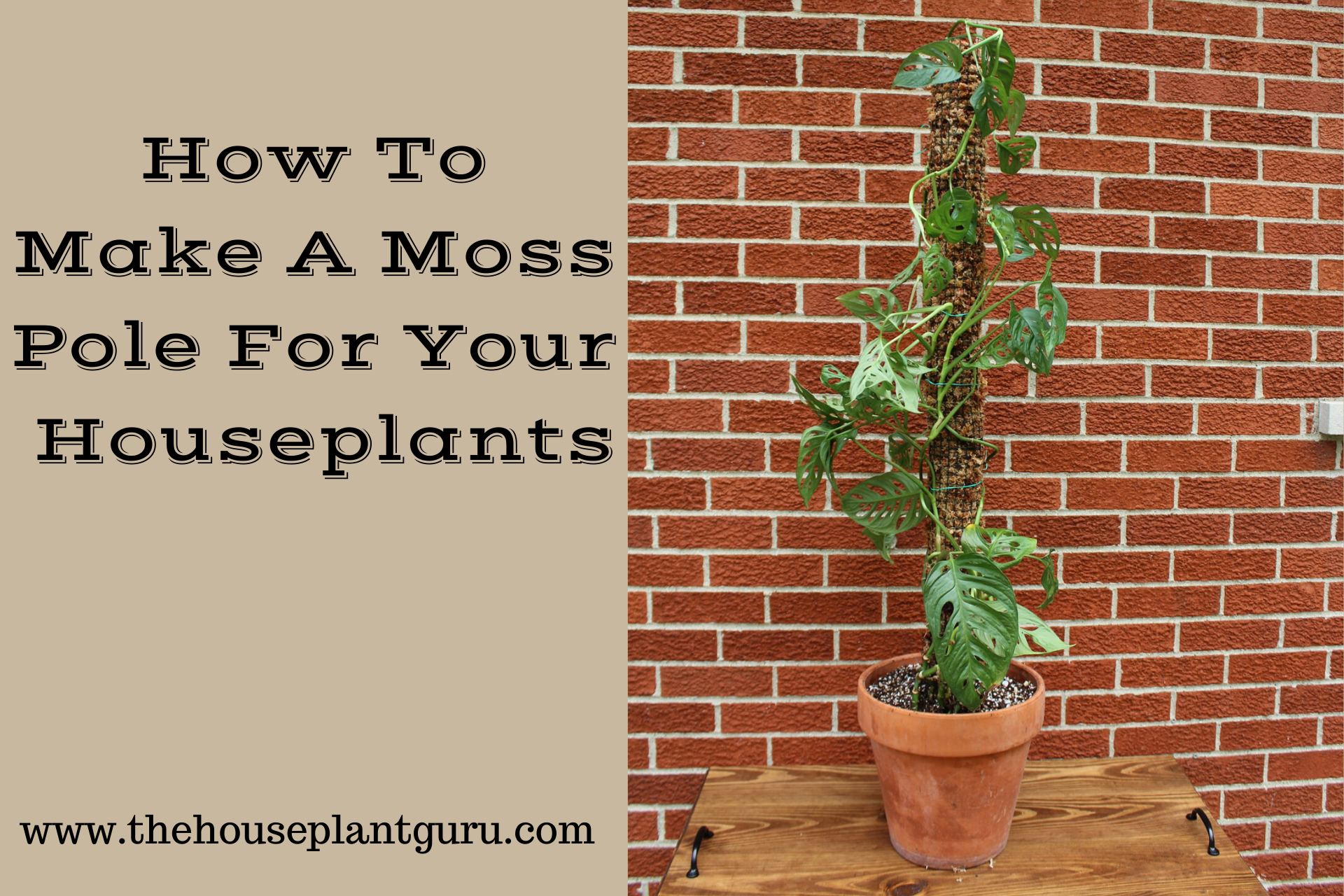 Have you ever purchased a plant that is growing on some sort of supportive pole? It may be colored styrofoam, a slab of wood, a dowel, or a pole covered with coco fiber. Usually, they are very short and work for about 5 minutes before the plant is too large for it. It may already be too large for the support when you buy it. So what can you do? Make your own moss pole for your houseplants! It is really easy and I’ll show you how.  I have made these before-many years ago, but I used chicken wire and it fell apart after being under the soil for a while. After seeing the ones Raffaele at Ohio Tropics was making, it inspired me to make some again. Below are my two unruly monsteras that needed some support.  The Monstera adansonii came in a hanging basket and you can see the coco fiber covered pole under the Monstera karstenianum. 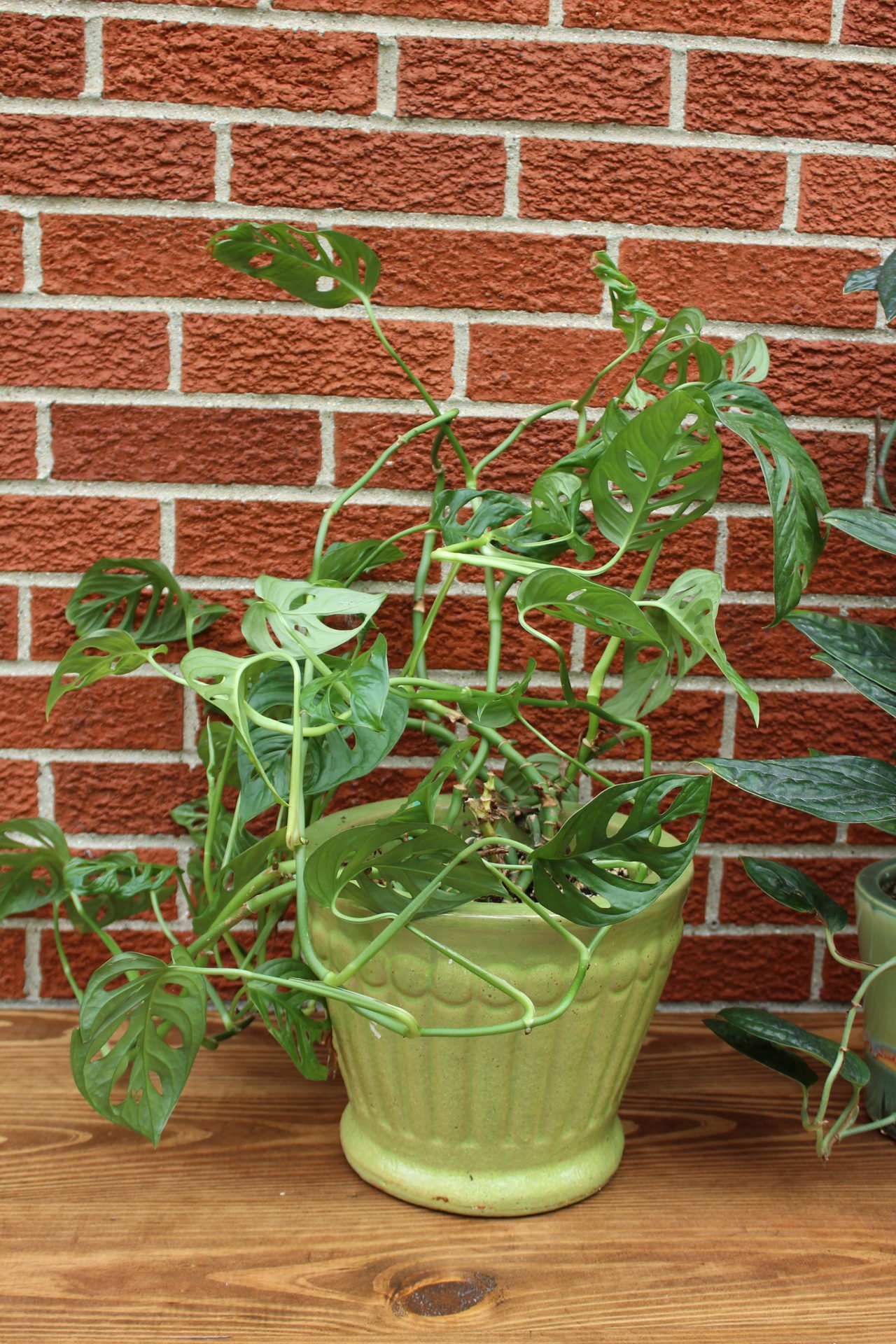 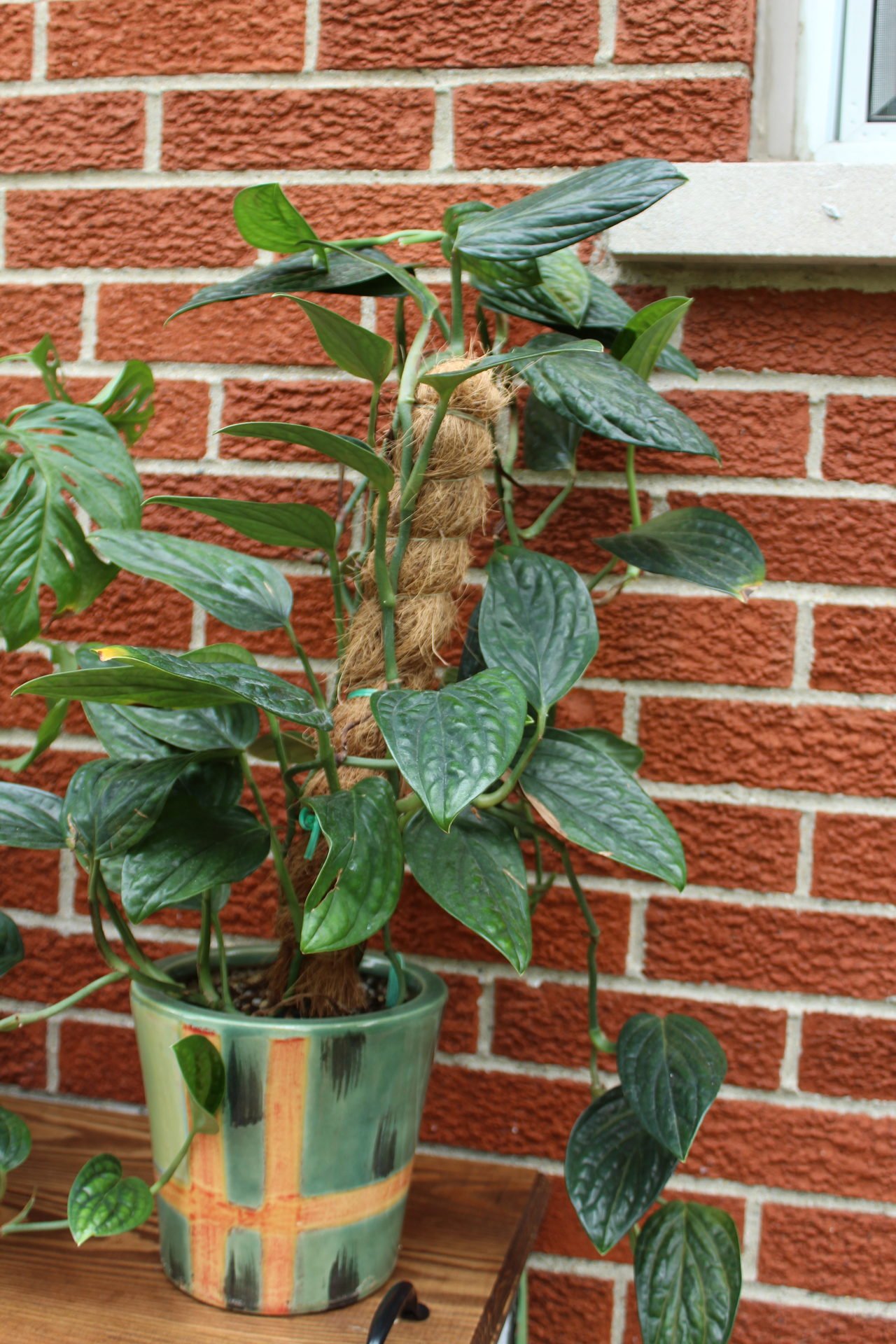 First I got my supplies together. I used the Better Gro Orchid Moss, which is sphagnum moss.  Shown are both the vinyl coated hardware cloth and chicken wire or poultry netting. I used the hardware cloth but may try one with the chicken wire because I like it. I tried to buy the taller fencing, but because of the pandemic, people are fencing in gardens and chicken yards, so I bought what was left- 2′ tall. I also used the Luster Leaf plant twist tie, but later used, which aren’t shown- florist pins. I will show you later what I did with those. Find some wire cutters and a tape measure, and you are ready to go. 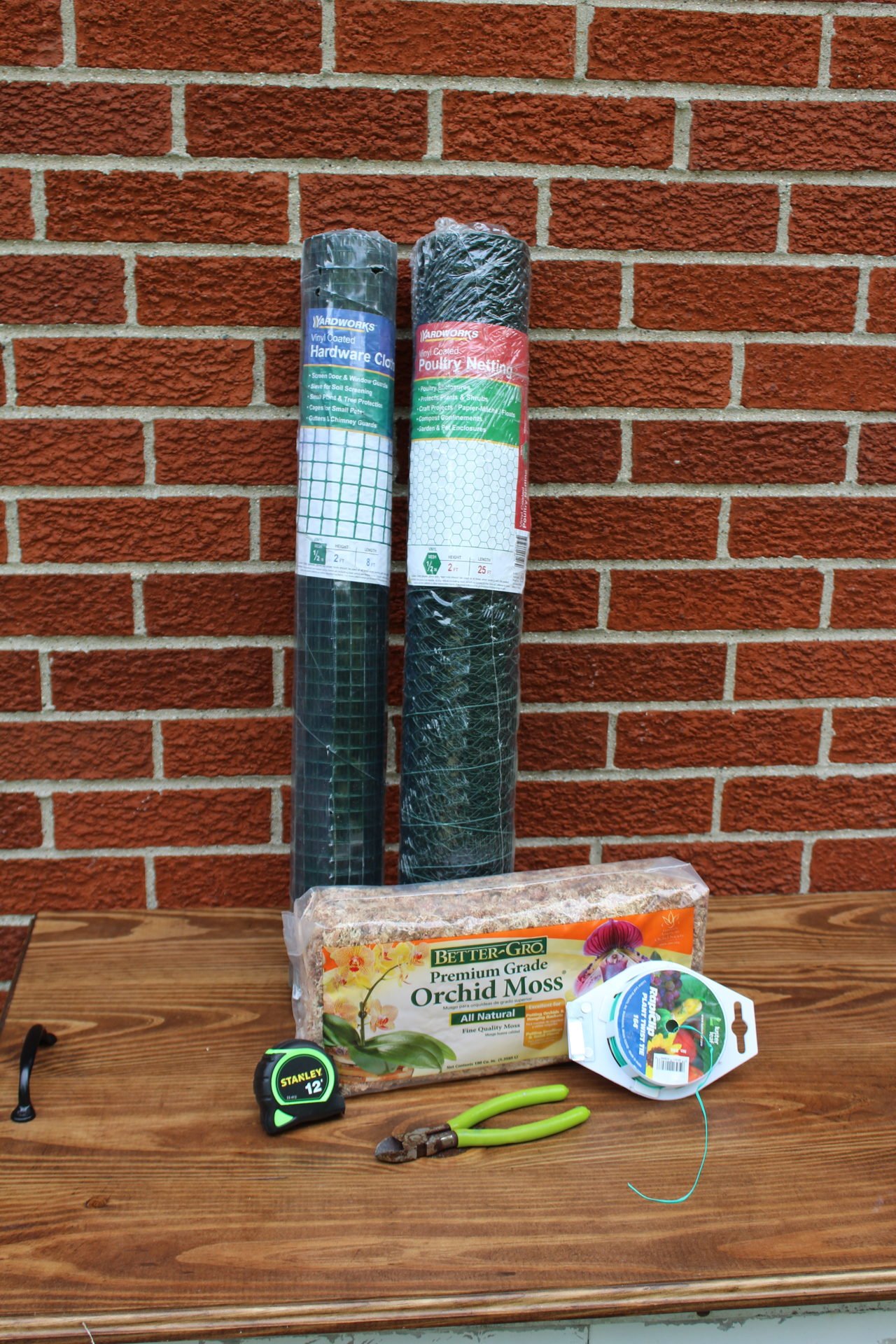 Get the plant off the old support 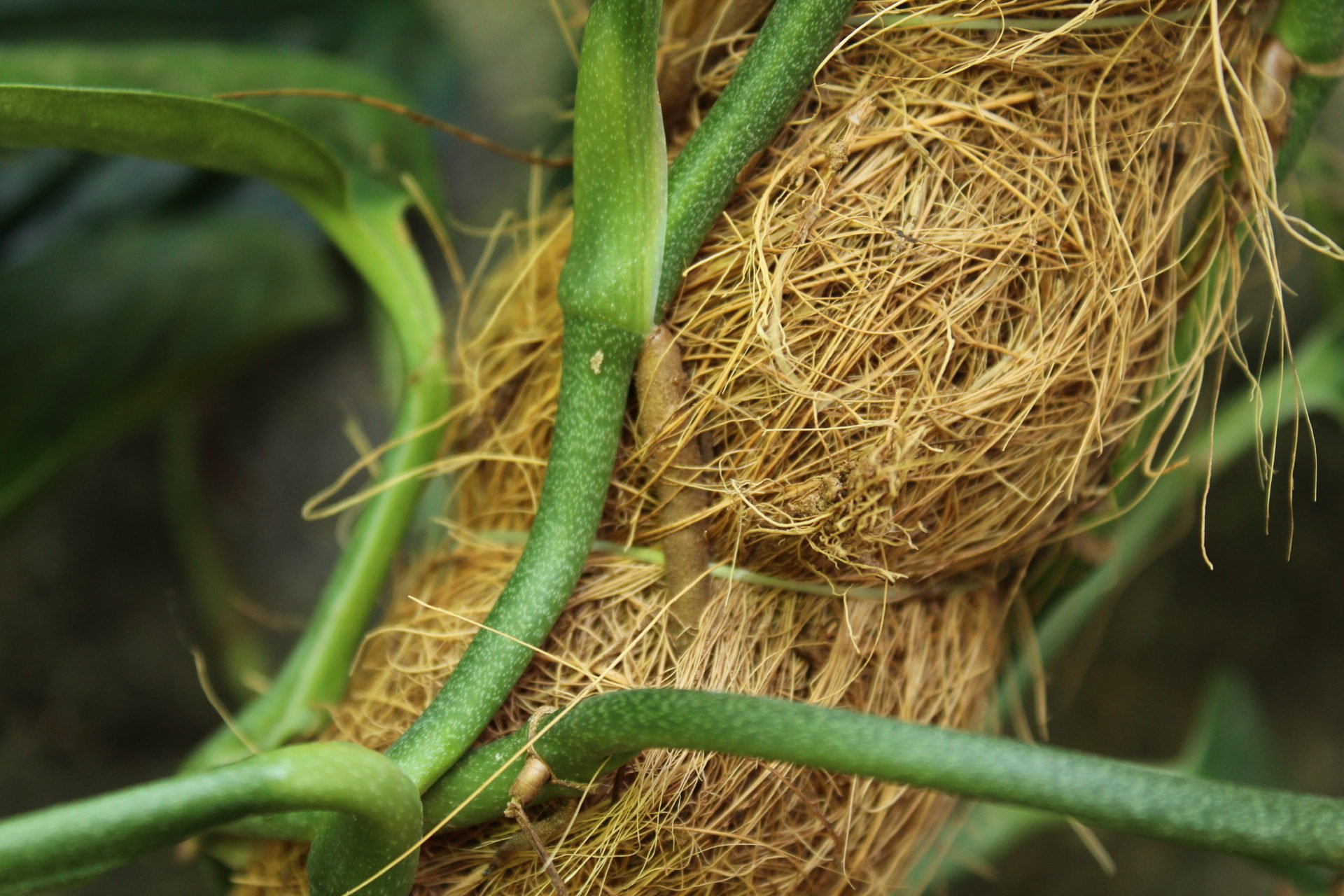 The aerial roots have grown into the coco fiber 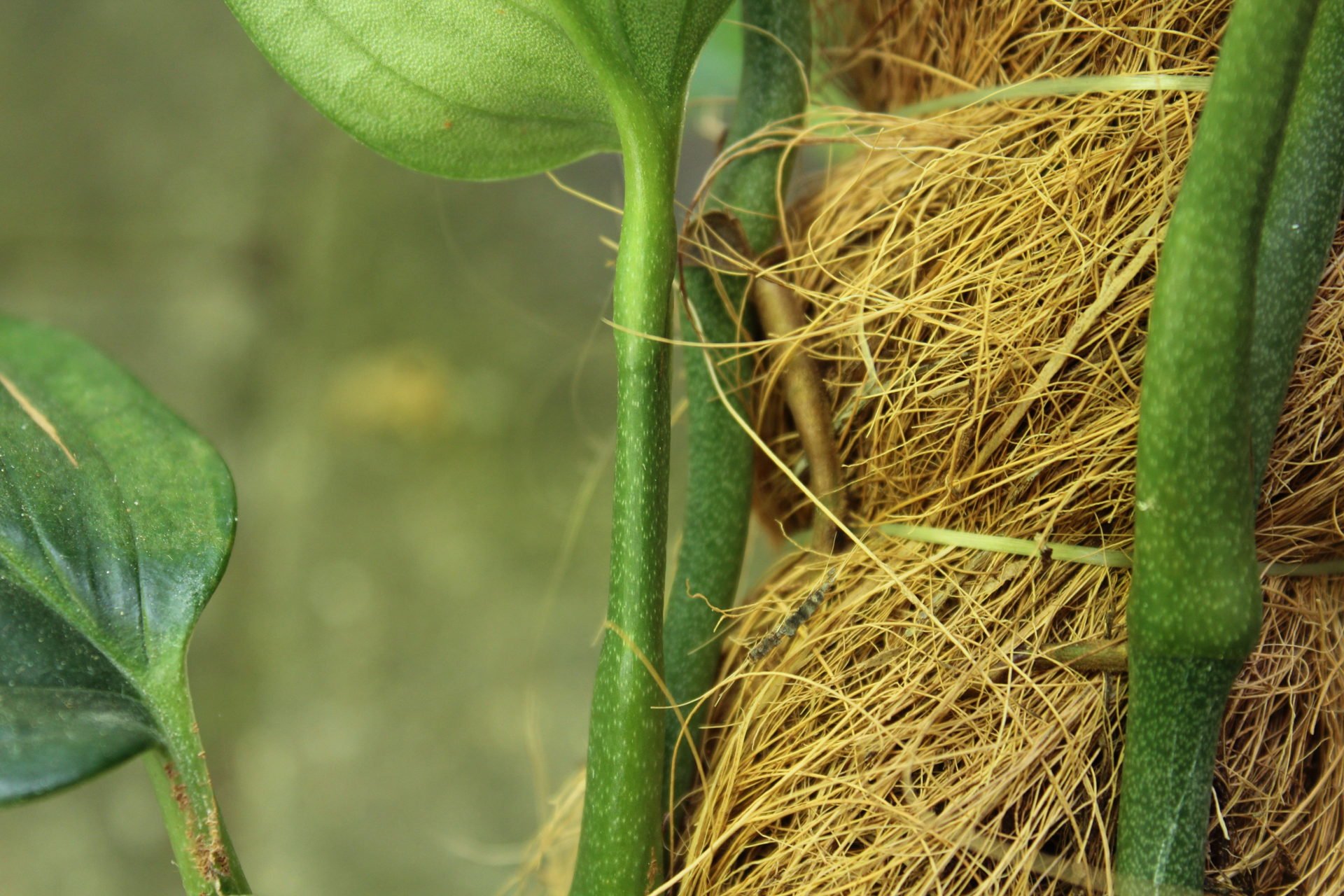 Aerial roots in the fiber 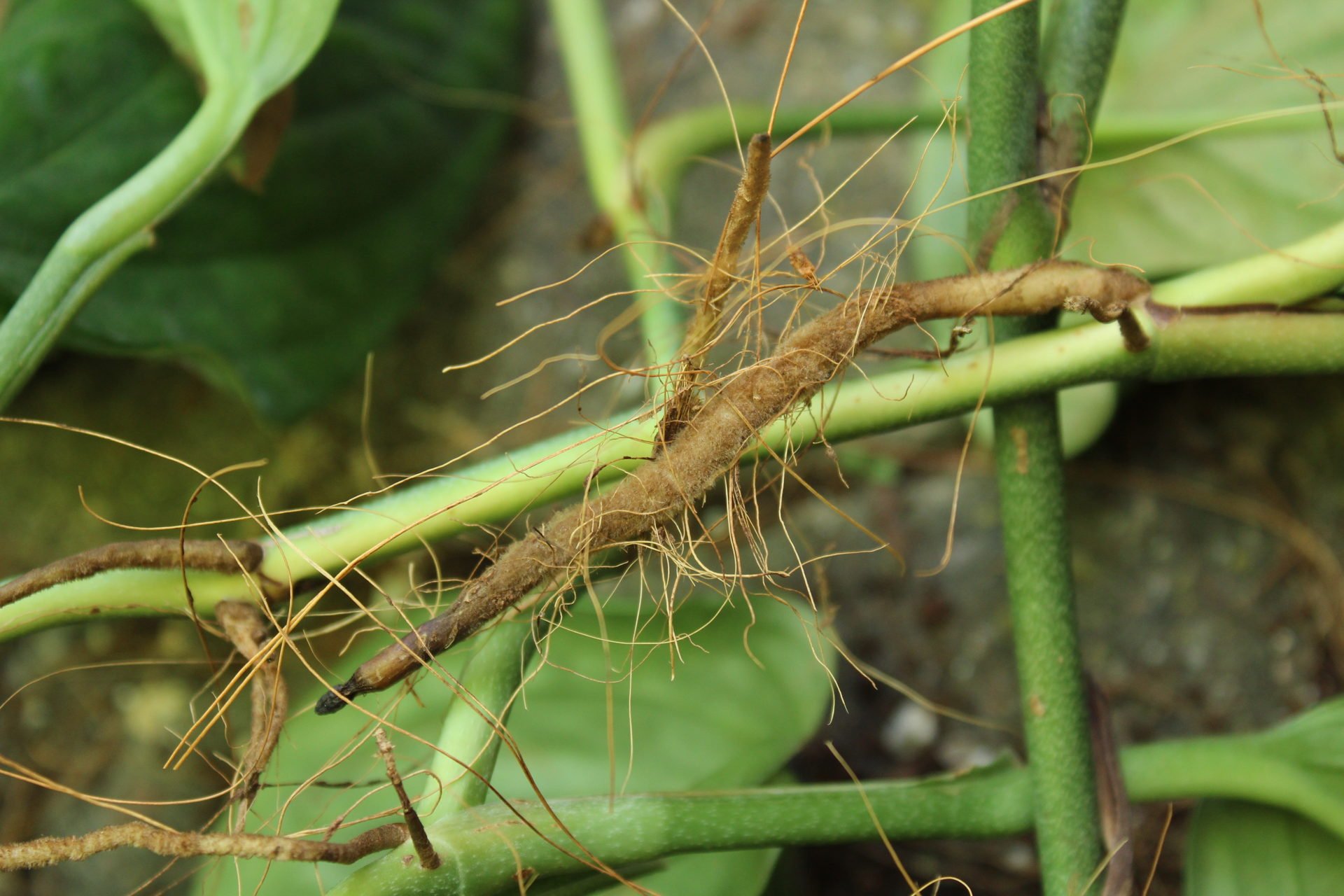 I didn’t get all the moss off, but didn’t want to hurt the roots 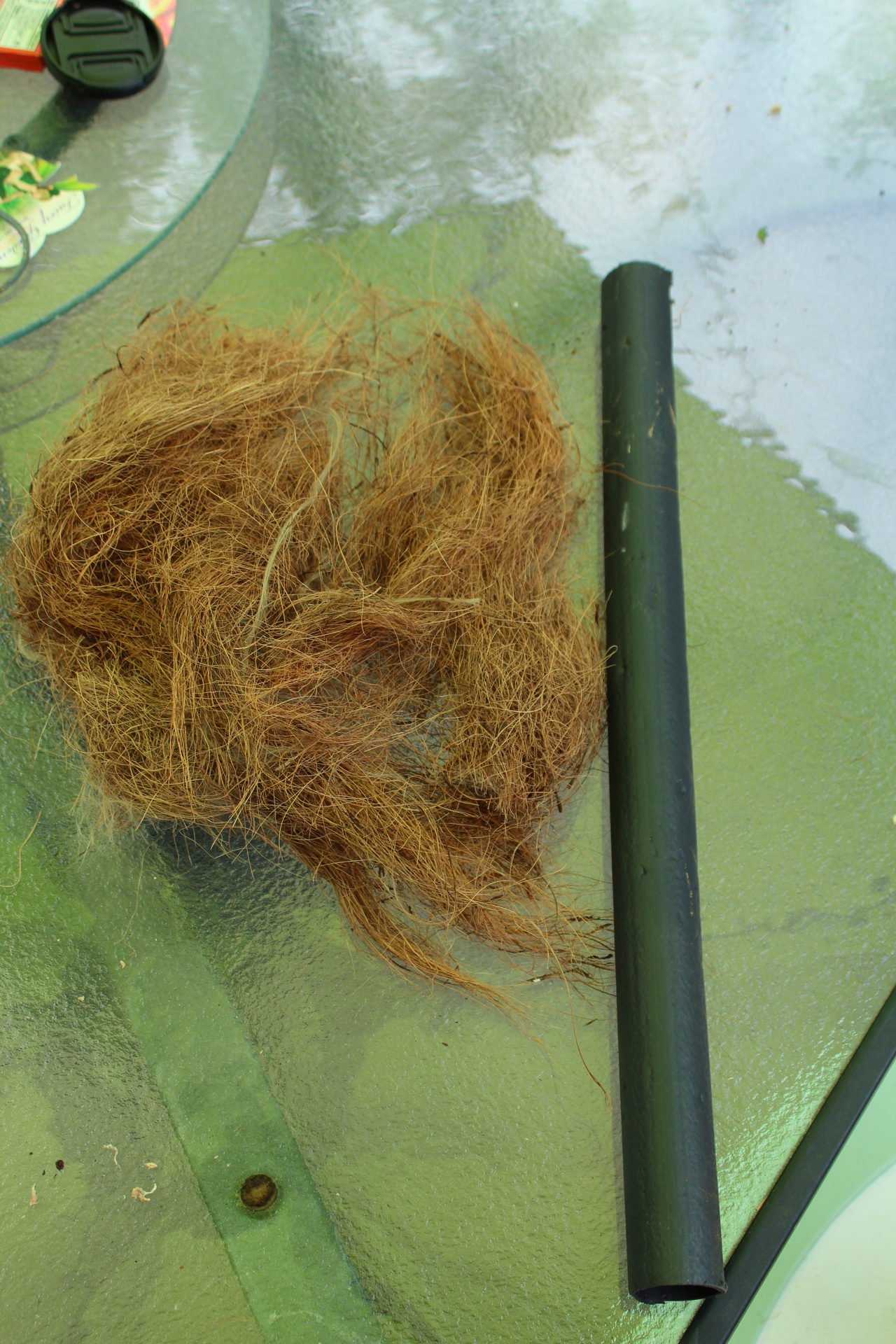 The first thing I had to do was get the one plant off the support it came on. As you can see the aerial roots had grown into the coco fiber, so I needed to remove them. I used scissors to carefully cut the fiber away. I couldn’t get all the fiber off the aerial roots, but that’s okay. 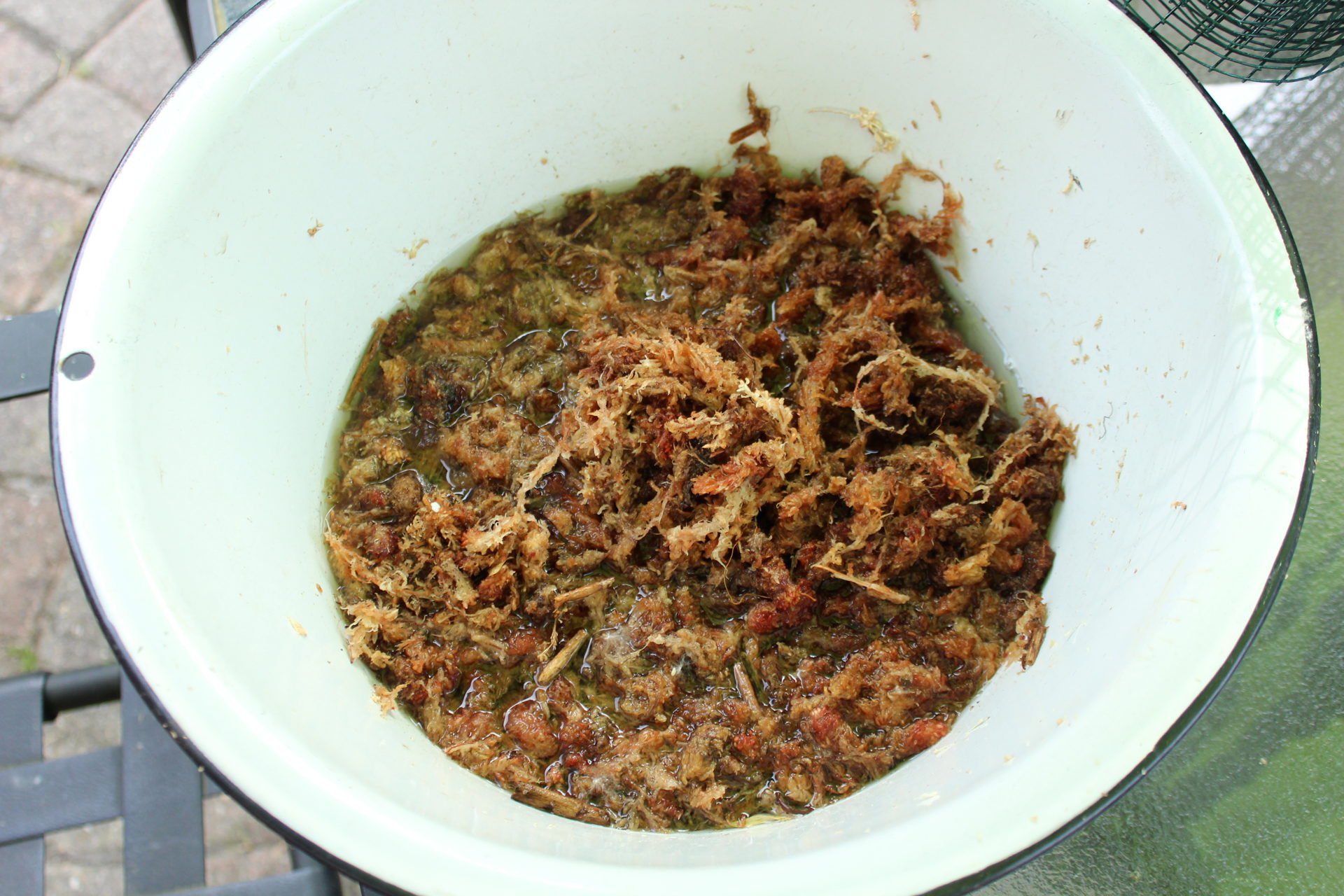 I soaked the moss in water while I was cutting the fencing and will squeeze out the excess as I use it.

While the moss is soaking, it is time to get the fencing (hardware cloth) ready and the twist ties cut. I cut my piece of fencing 19 squares wide which is, obviously as the squares are 1/2″, 9 1/2″ wide. (I didn’t really need a tape measure.) I cut a few pieces of twist tie about 4-6″ long. If you would like a skinnier pole, don’t cut it as wide, and if you want a larger support, use a wider piece of fencing. It’s all up to you. I used wire cutters, but I wish I had “tin snips” as my dad called them, which are basically heavy-duty scissors. We had a tin roof on an outbuilding and I guess he used those to cut that…..? P.S. I called my older brother and googled it, as well, and they still have those and yes, dad used them to cut tin pieces for the roof and other projects. Since this wire was only 2′ tall and I wanted a taller support for my plants, I added another piece on top. I overlapped it by 3 squares and “sewed” it together with the wire that came wrapped around the fencing so it wasn’t as obvious as the twist ties would have been.

I started stuffing the moistened moss in the wire tube and twist-tied it together as I worked my way up. The bright green is obnoxious (in this instance-I love green as a rule) but I figure it will be on the back side and eventually the leaves will cover it. 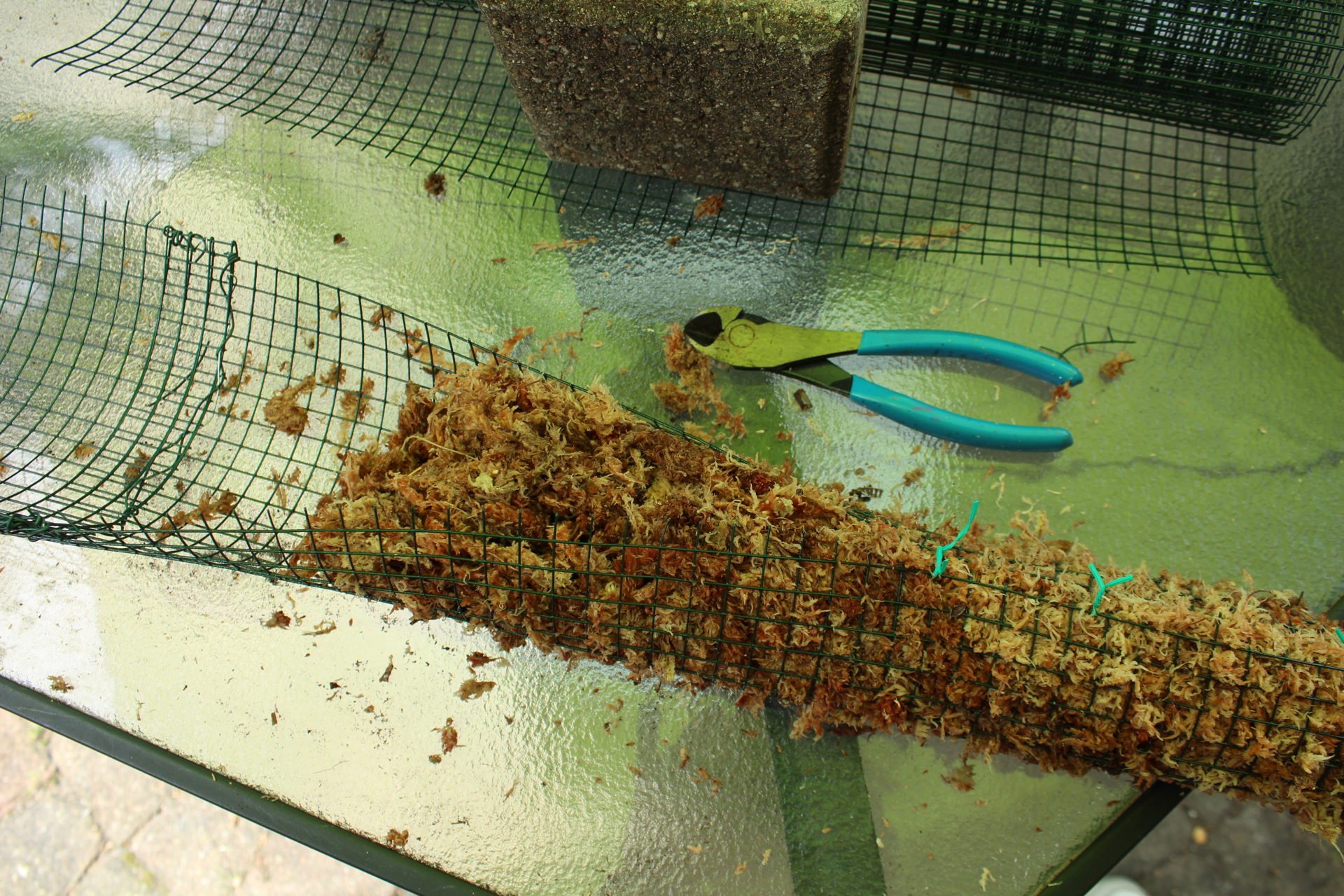 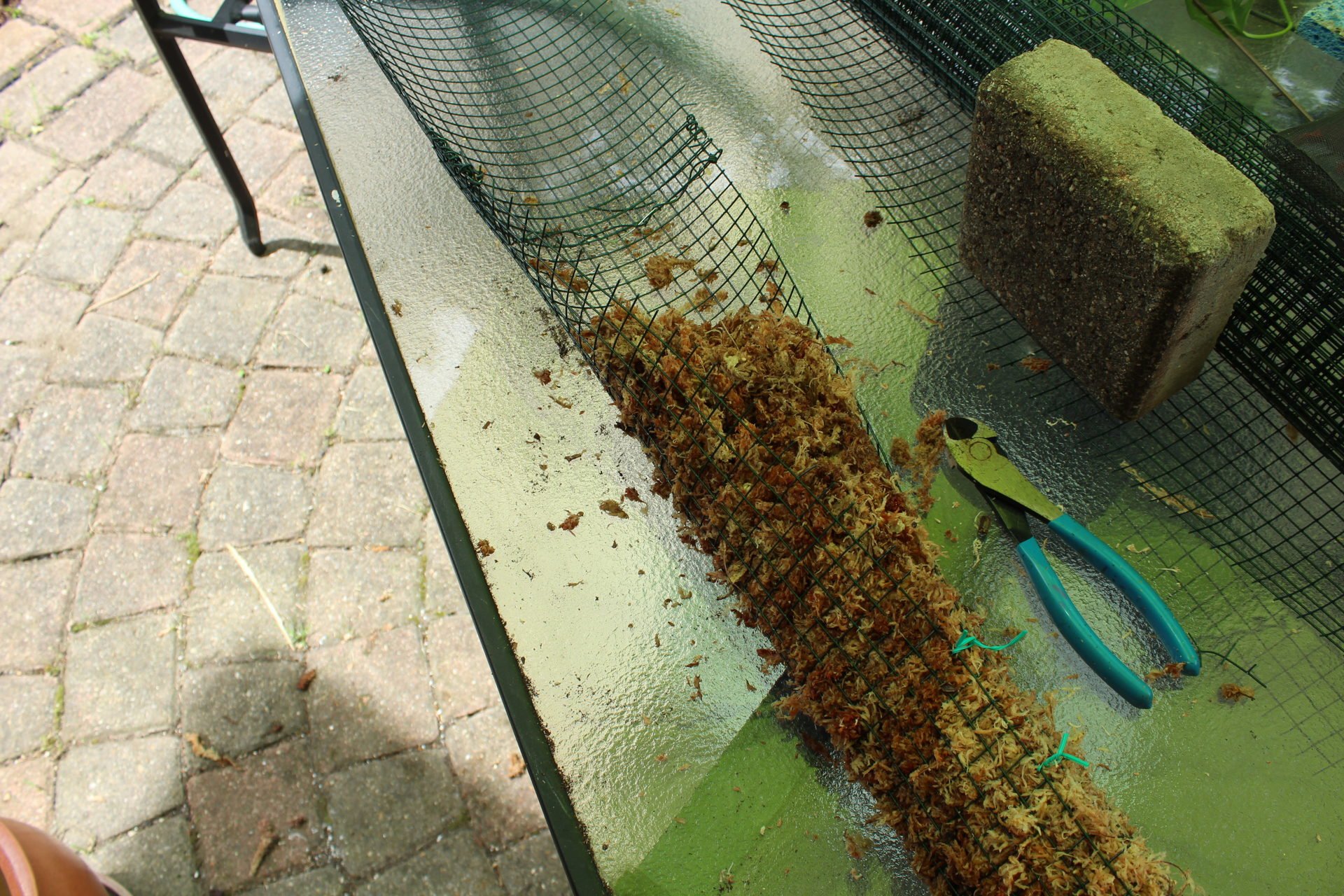 I’ve cut the hardware cloth and am filling with moss 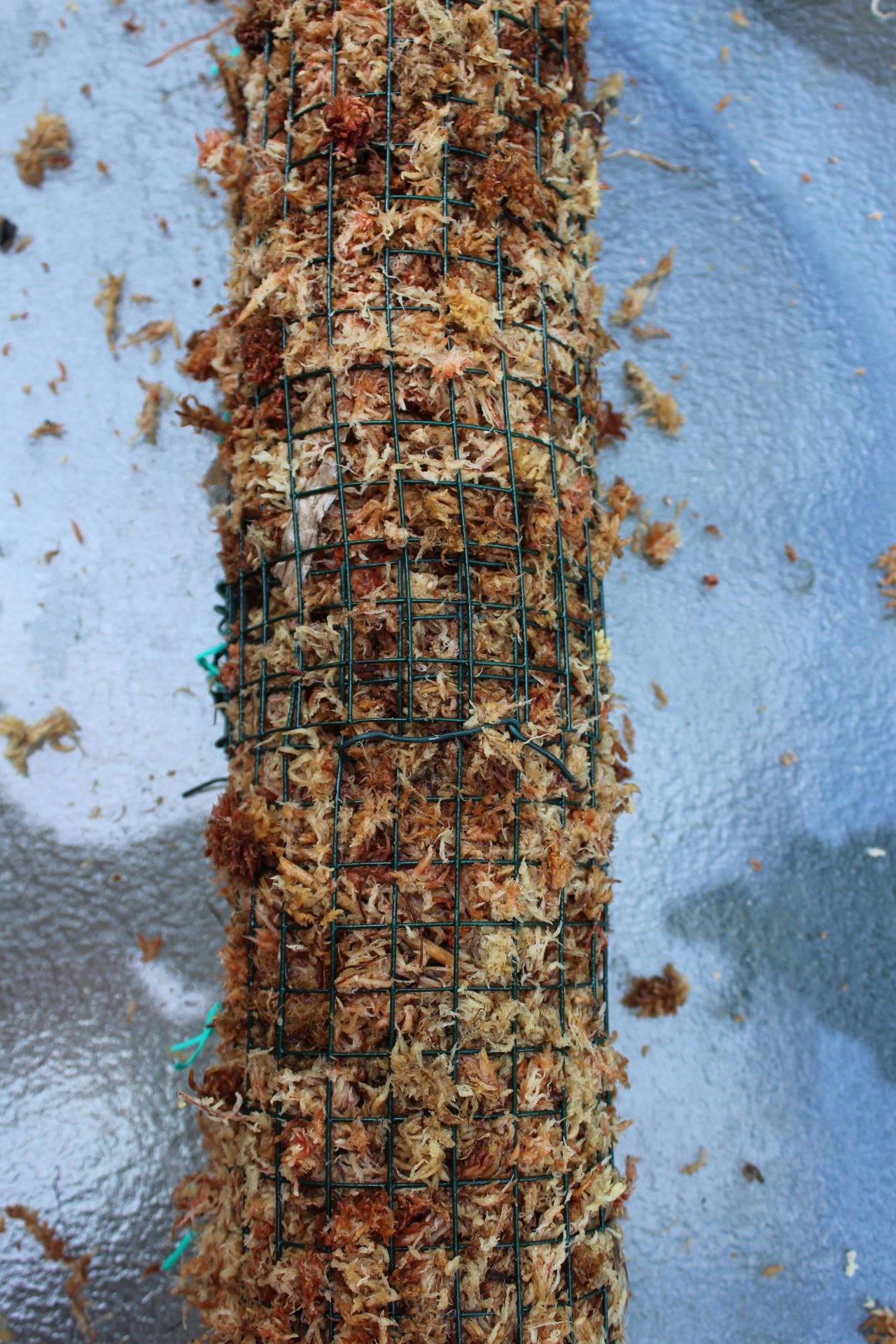 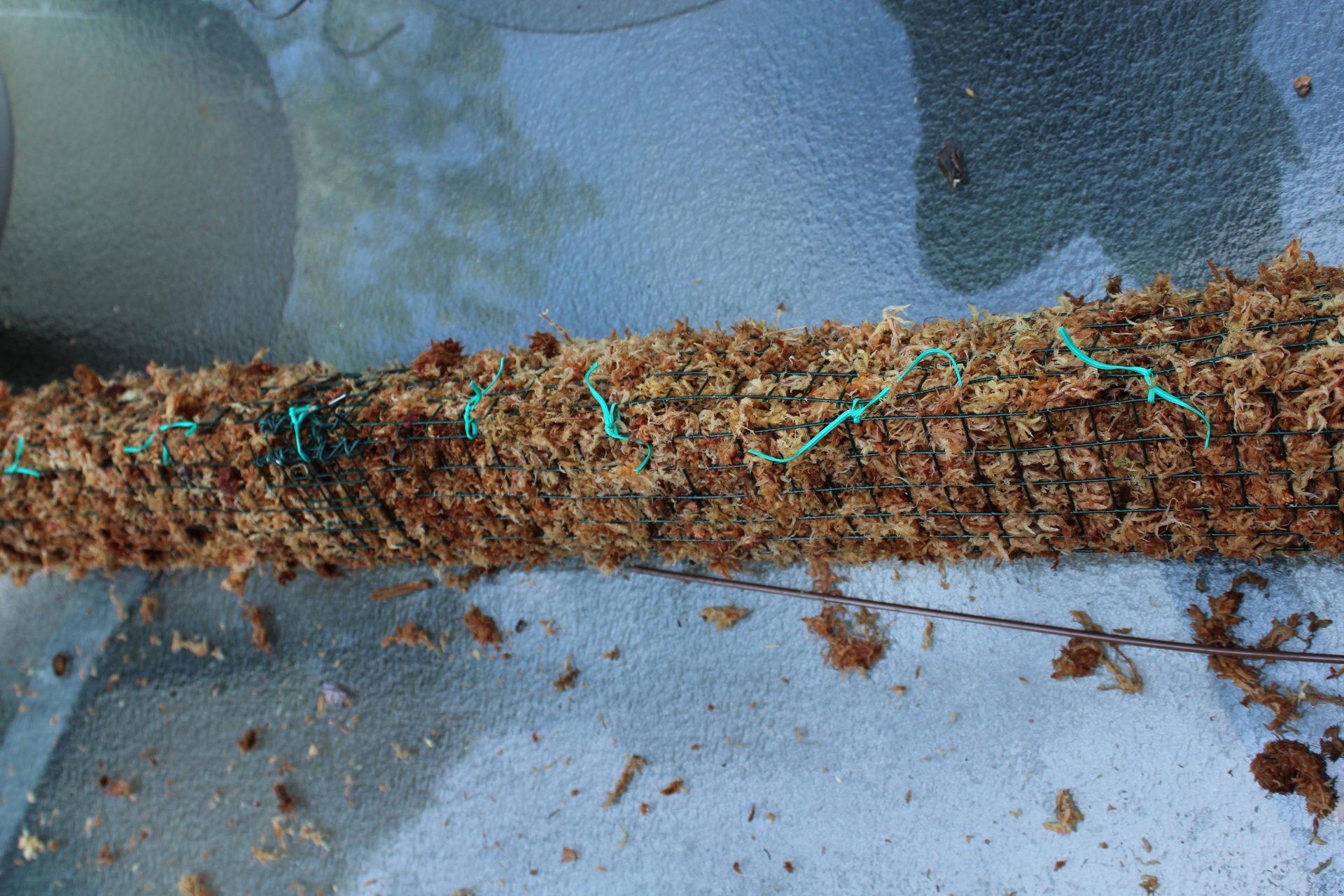 I used twist ties to hold it together

I used two packages of the moss for the four-foot pole. I only used 9 1/2″ of the fencing x 2, so I could make about 5- 4′ moss poles from this 8′ package of hardware cloth. (If that’s wrong, let me know. No one ever said I was good at math.) They were fun to make and I’m excited to see how well my plants do with something to climb up. 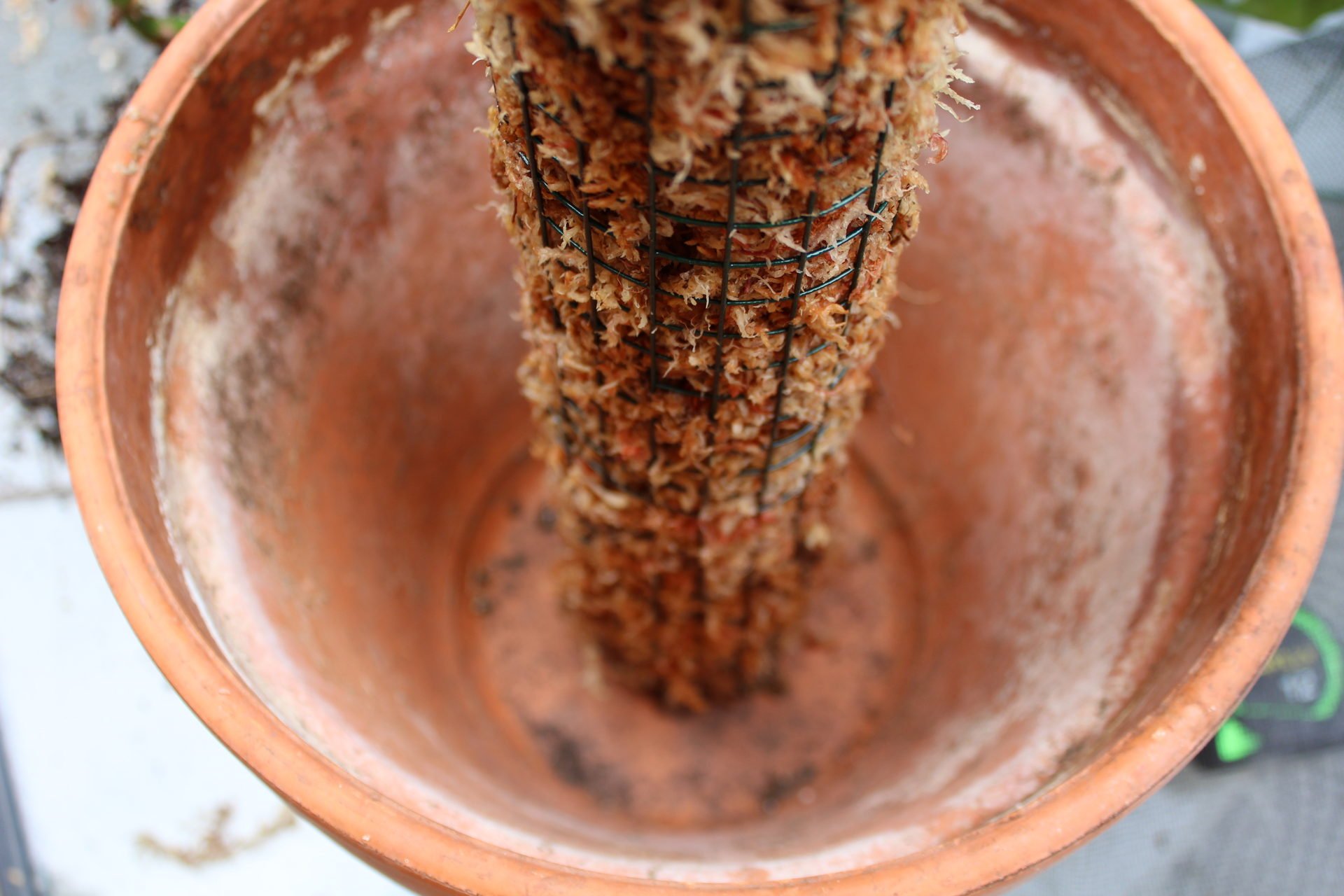 Here is the moss pole in the clay pot

I placed the pole on the bottom of the container and then filled it with potting medium and planted the plant next to the support. The pole doesn’t have to be in the middle if you are planting a plant that has a large root ball. It might be easier to place it closer to the back of the container so there is more room to get the root ball in. 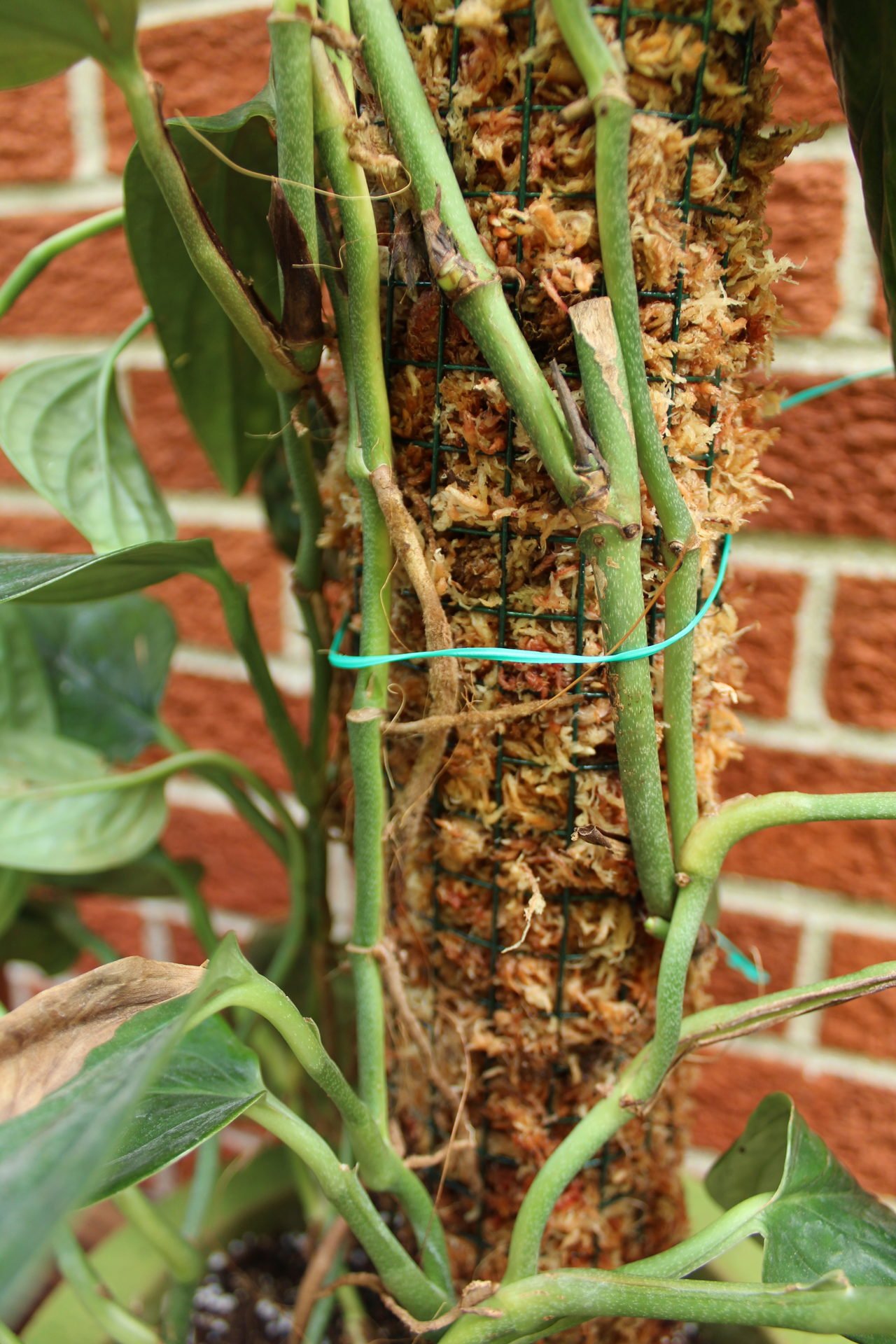 Below are the finished poles with the plants loosely tied to them with twist ties. They look a bit unruly right now as the leaves haven’t turned toward the light yet, as they will after being on the pole for a while. 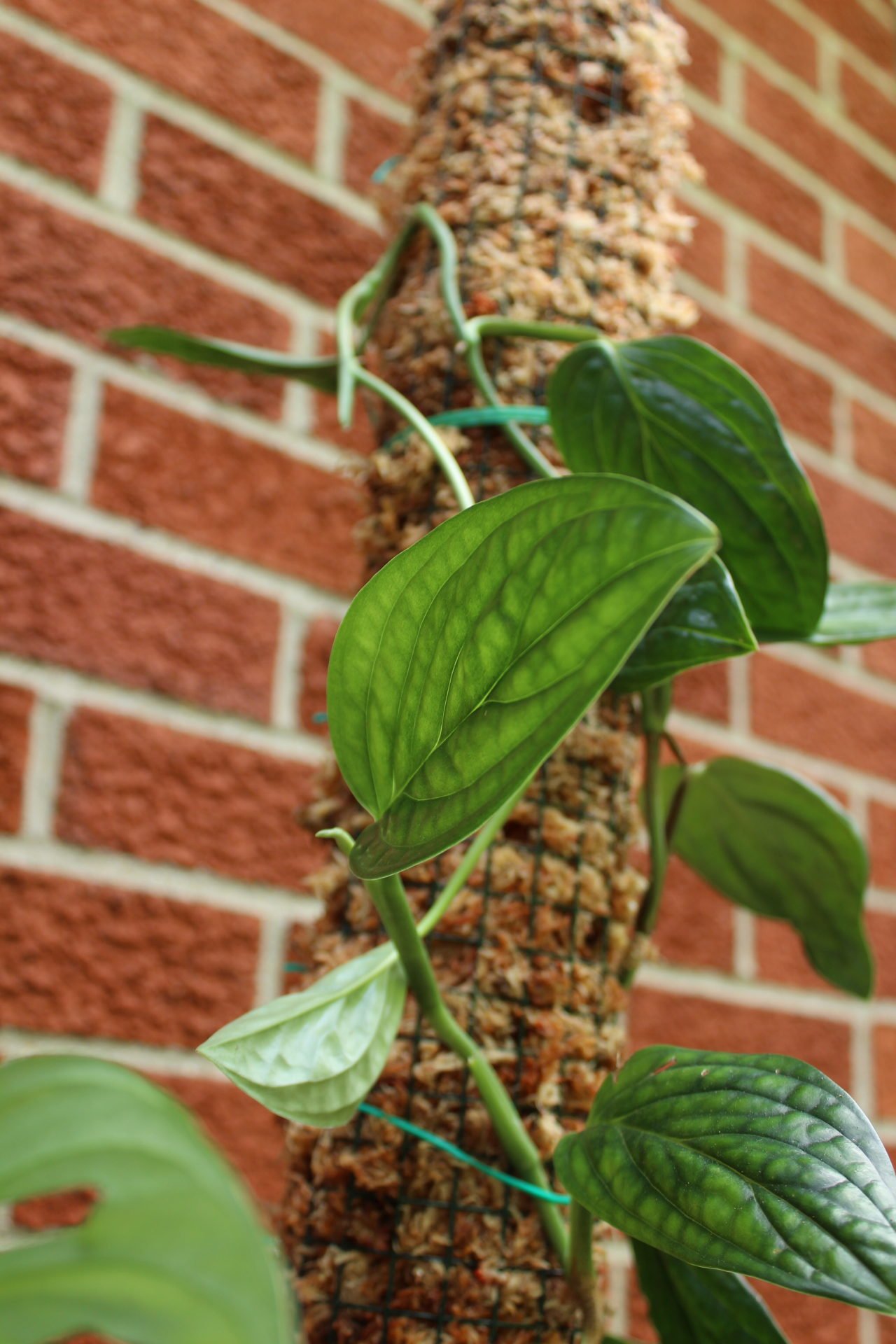 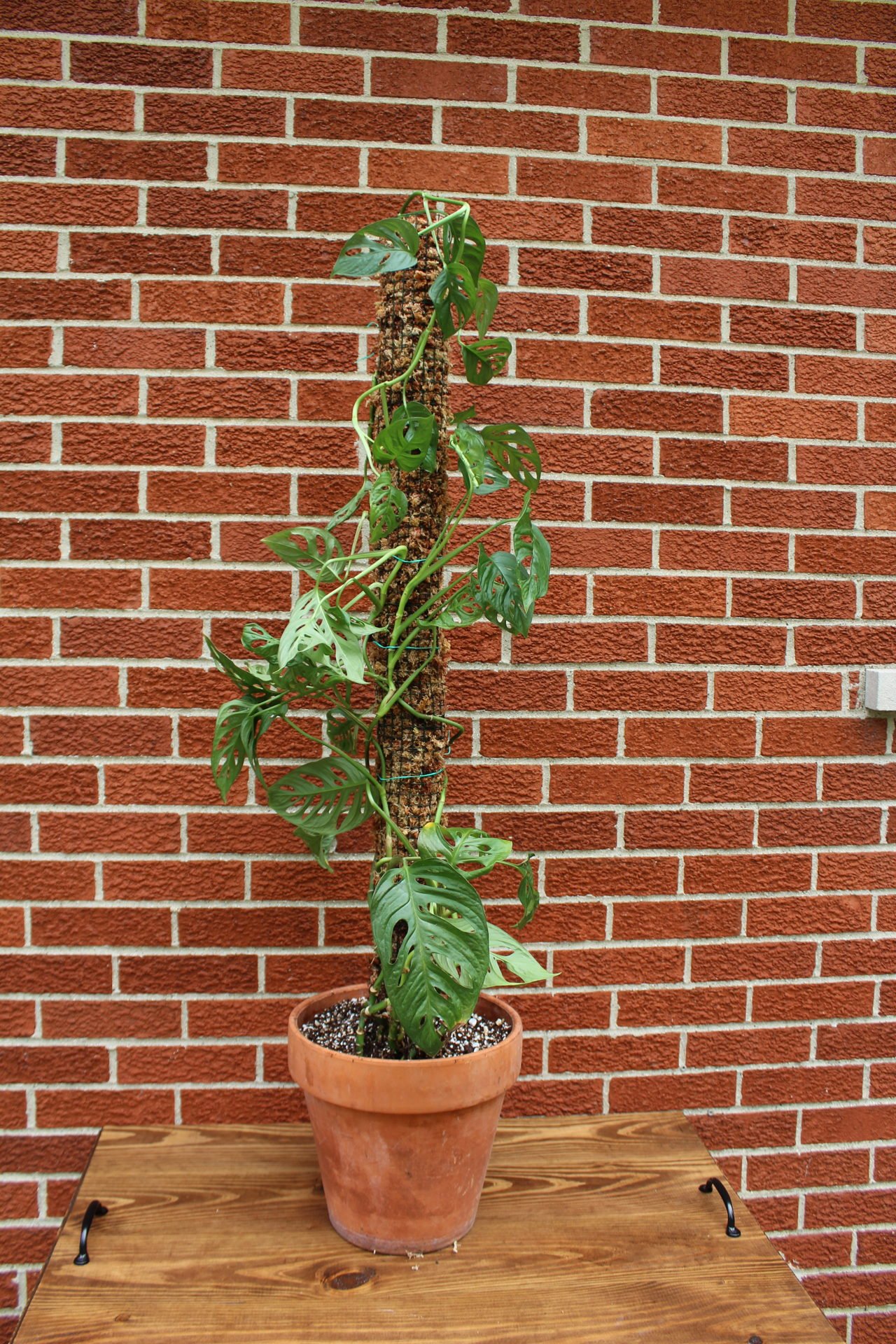 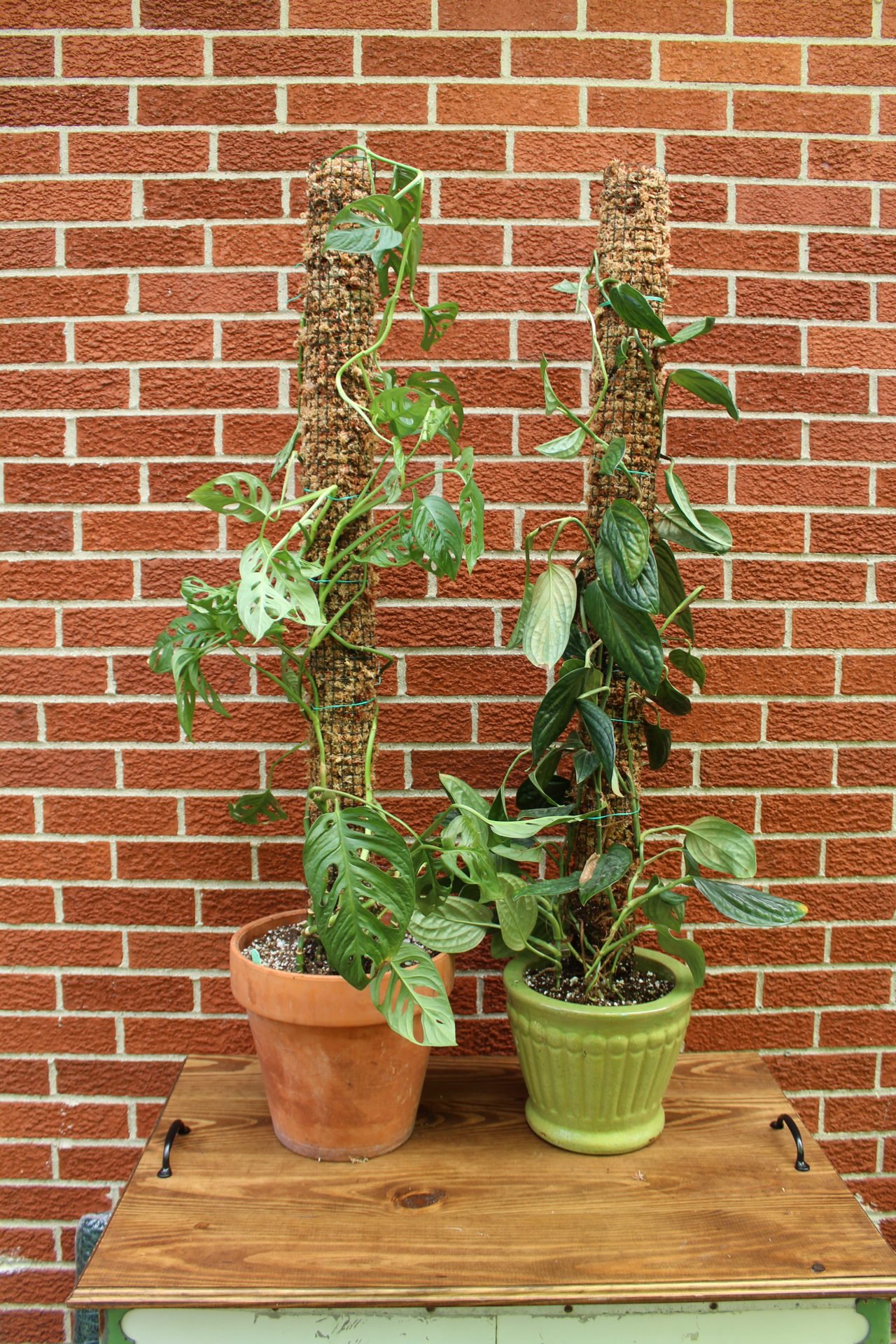 Both monsteras on their new moss poles

Florist pins instead of twist ties

After I used the green twist ties, I thought of florist pins. I had bought a stuffed topiary years ago that was covered with creeping fig – Ficus pumila and it was attached to the moss form with florist pins. I went to the basement and found some. (I have EVERYTHING in the basement.) They are like big hairpins and actually, hairpins would work if you have some, or just wire bent to the shape of a hairpin. I didn’t take all the twist ties off as I think until it gets attached to the moss, it may need more support, especially the larger vines. 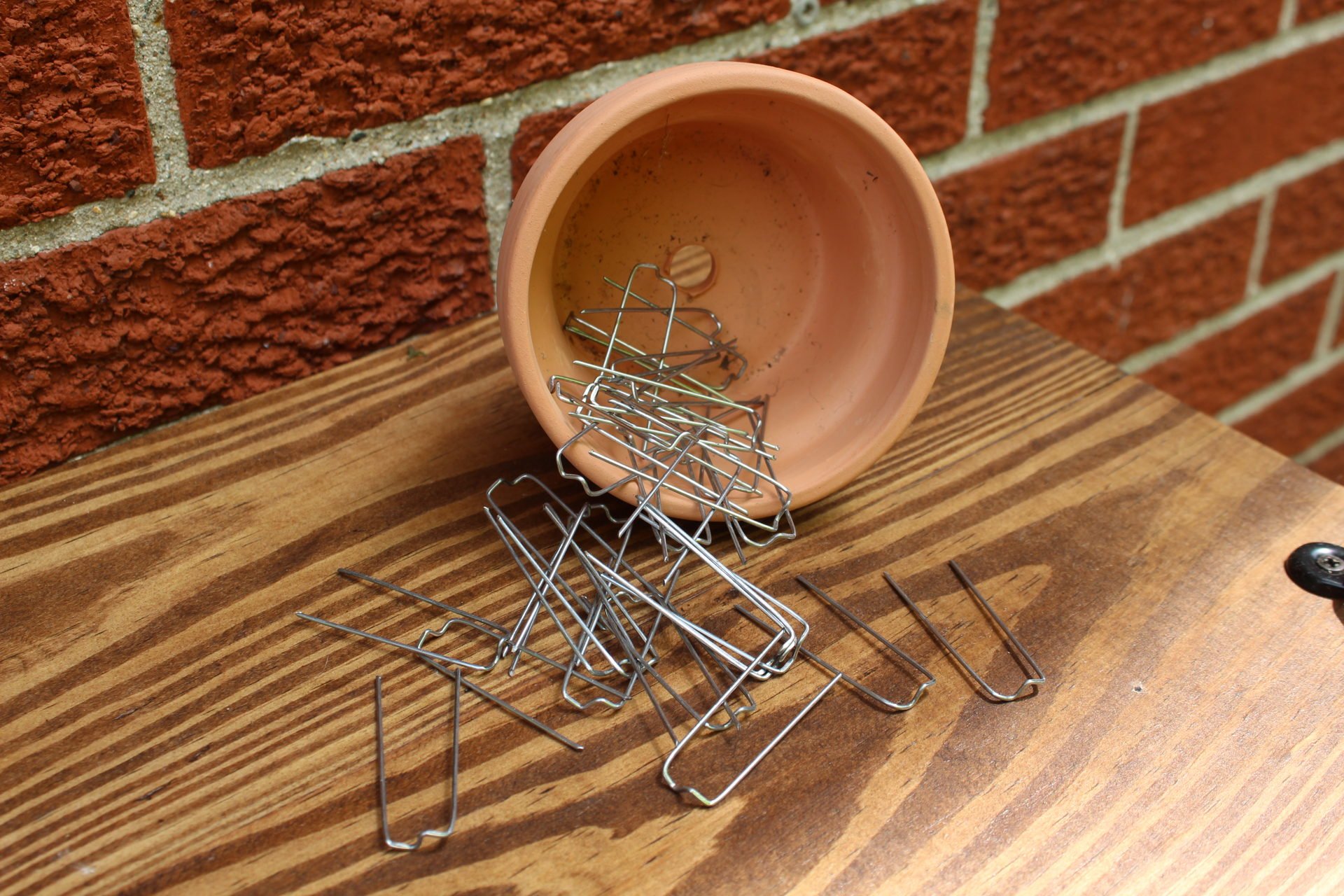 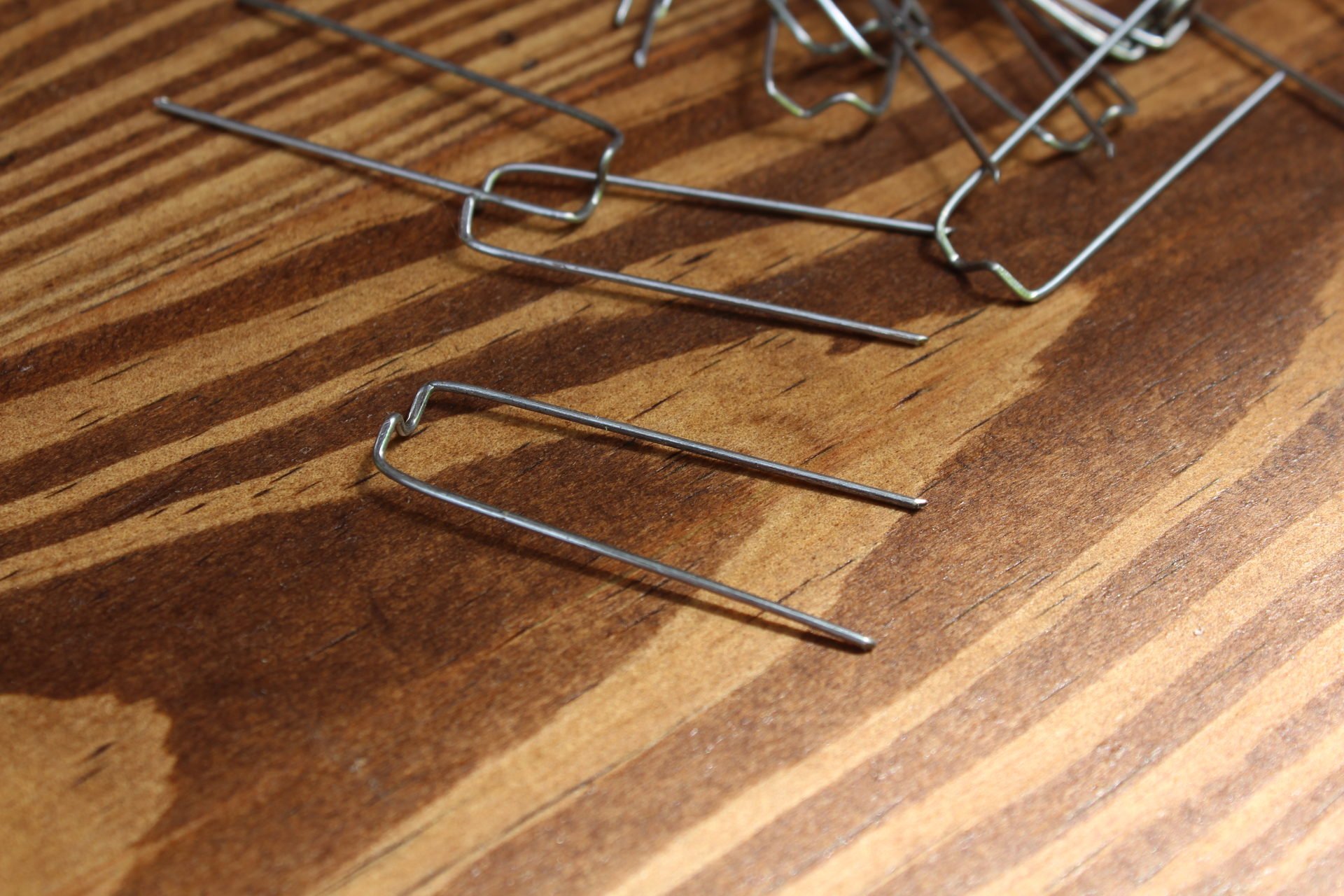 As you can see below, the florist pins kind of disappear in comparison to the green twist tie. Make sure they aren’t pressed against the stems too tightly, loosen them when needed, and remove them when the vine is firmly attached to the moss. 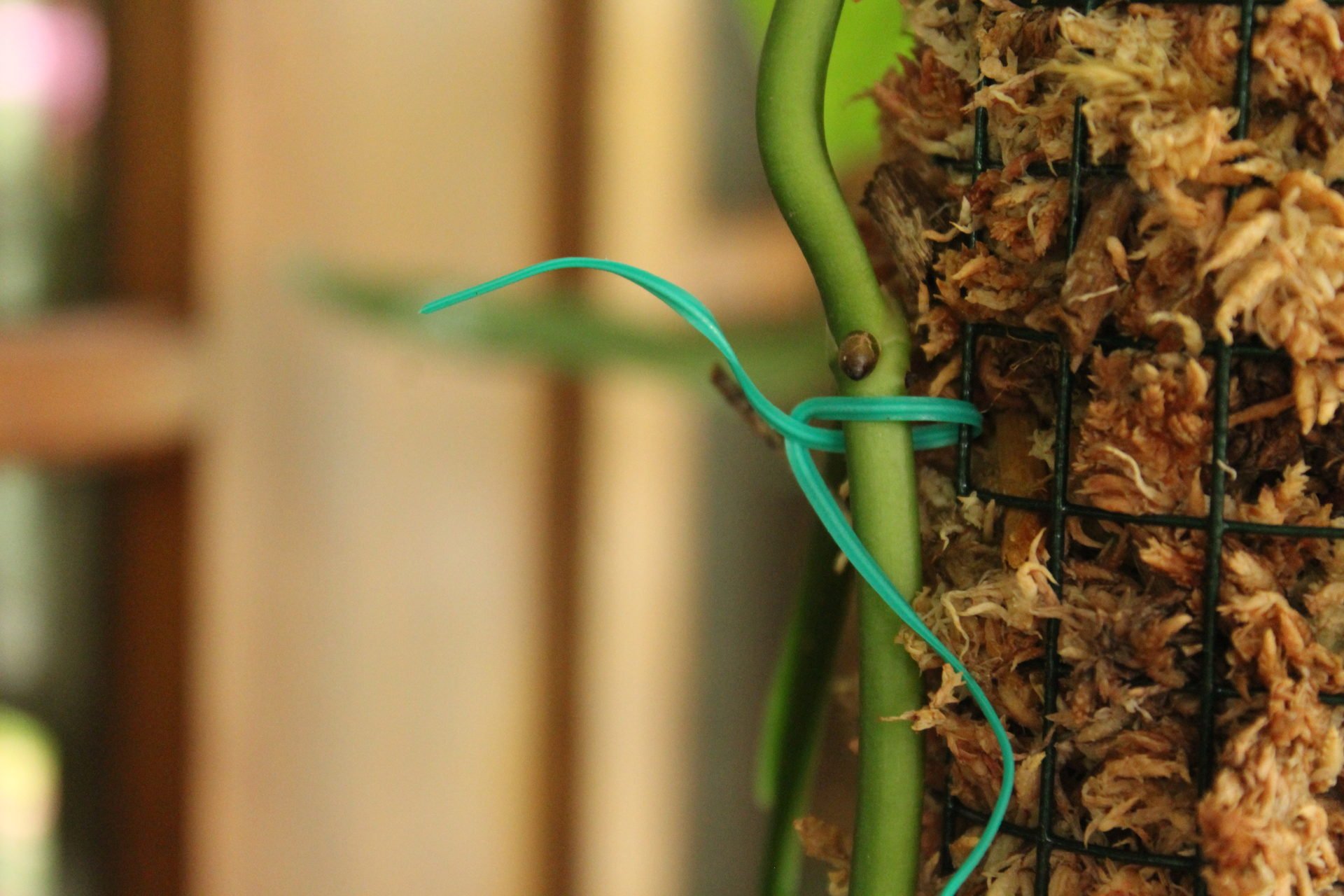 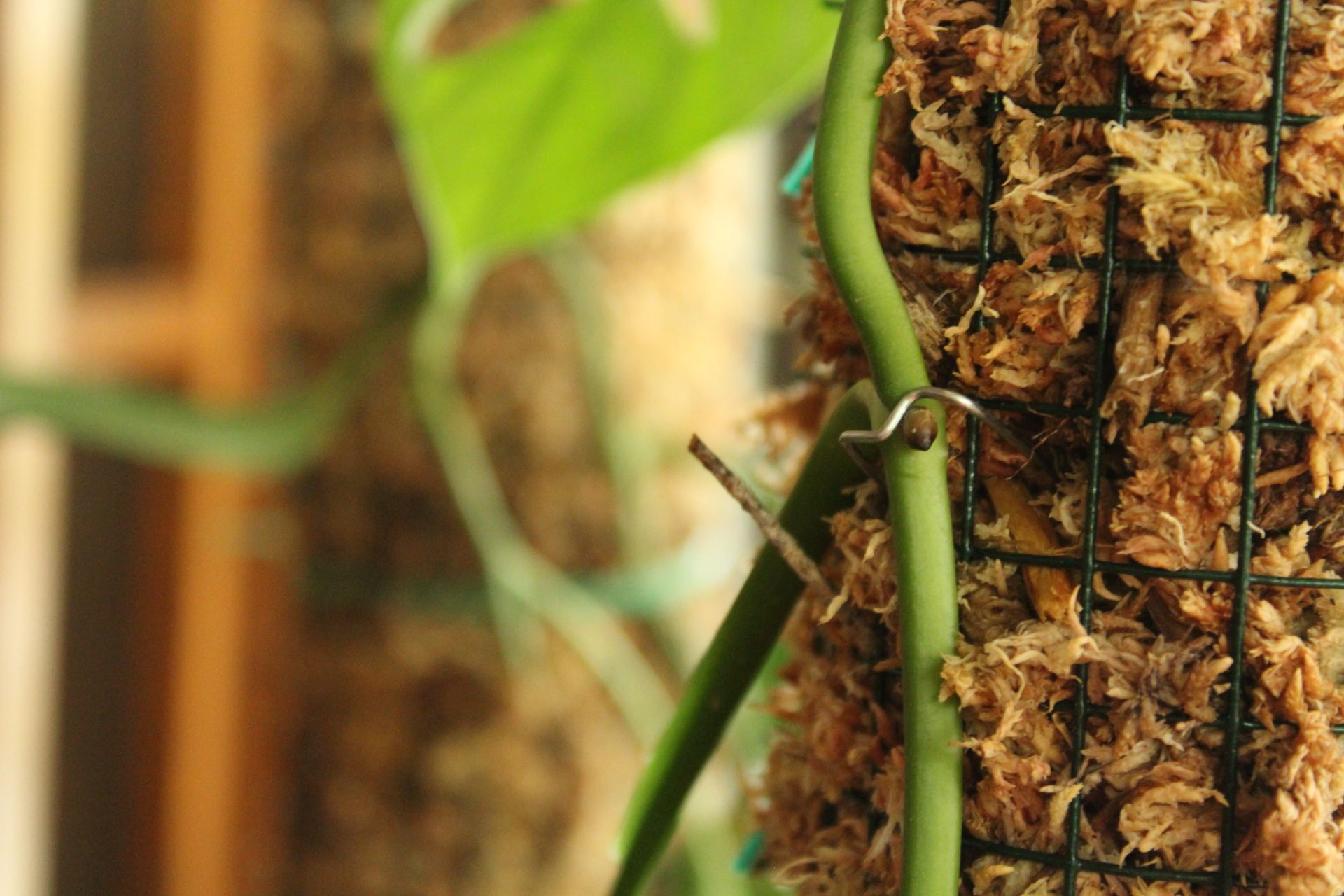 I took it off and used a florist pin 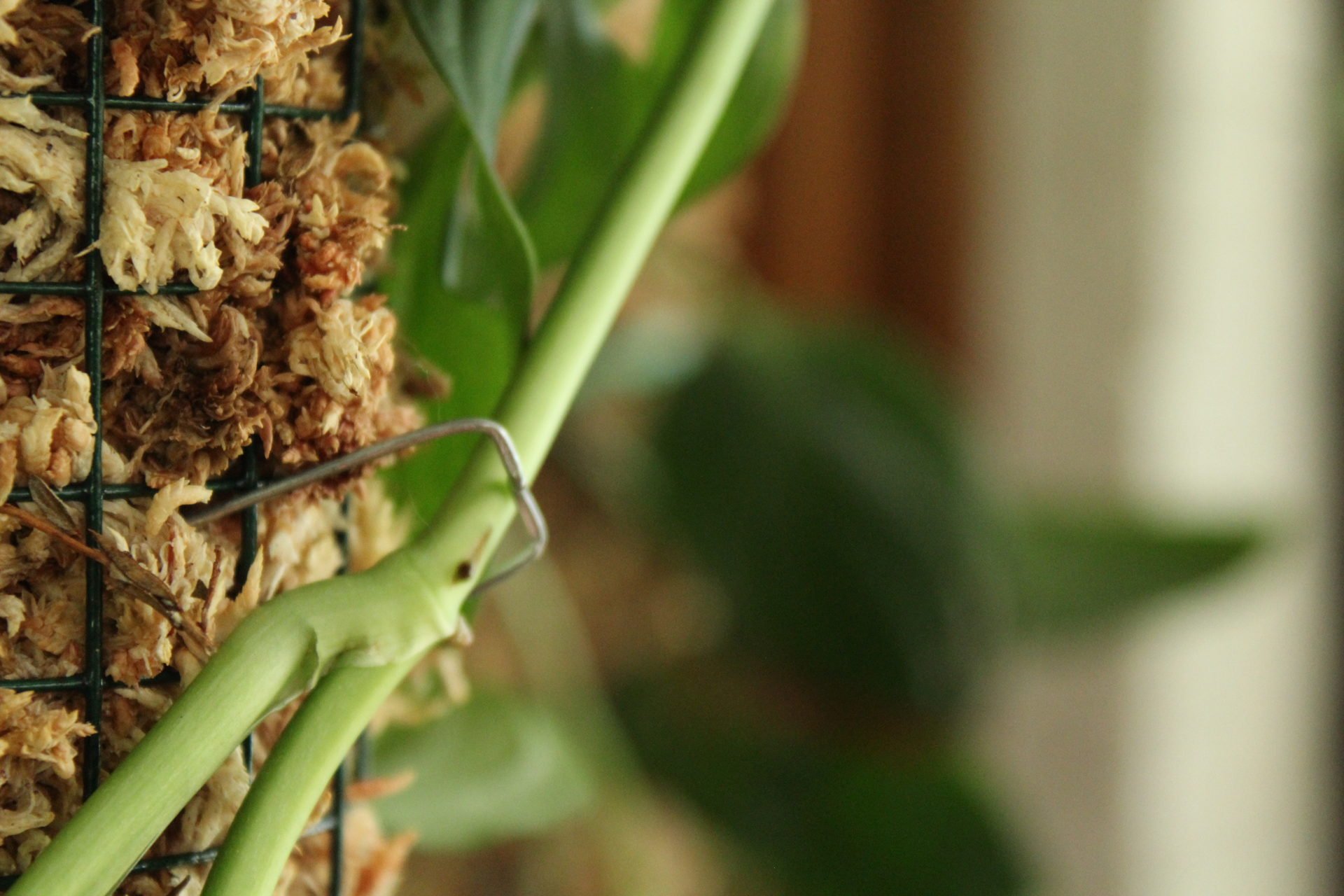 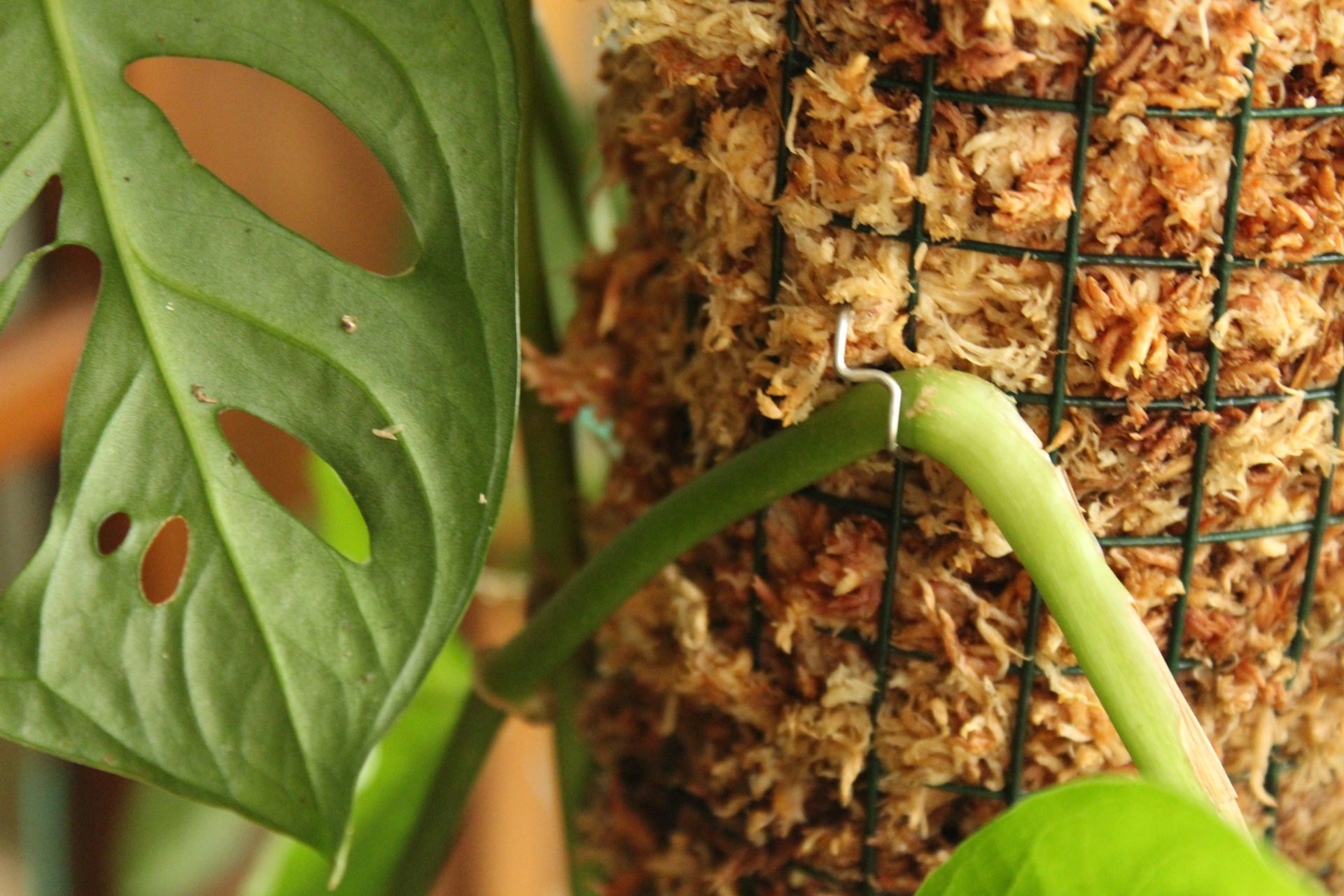 I used all the moss I had, so I will be getting some more and making more poles for my climbing plants! I hope this has inspired you to make one or two for your plants. It really is easy to do. Have a great day!

P.S. If you buy the items mentioned from Amazon, I will receive a minimal amount from Amazon. Thanks!