How to Care for Your Mistletoe Fig 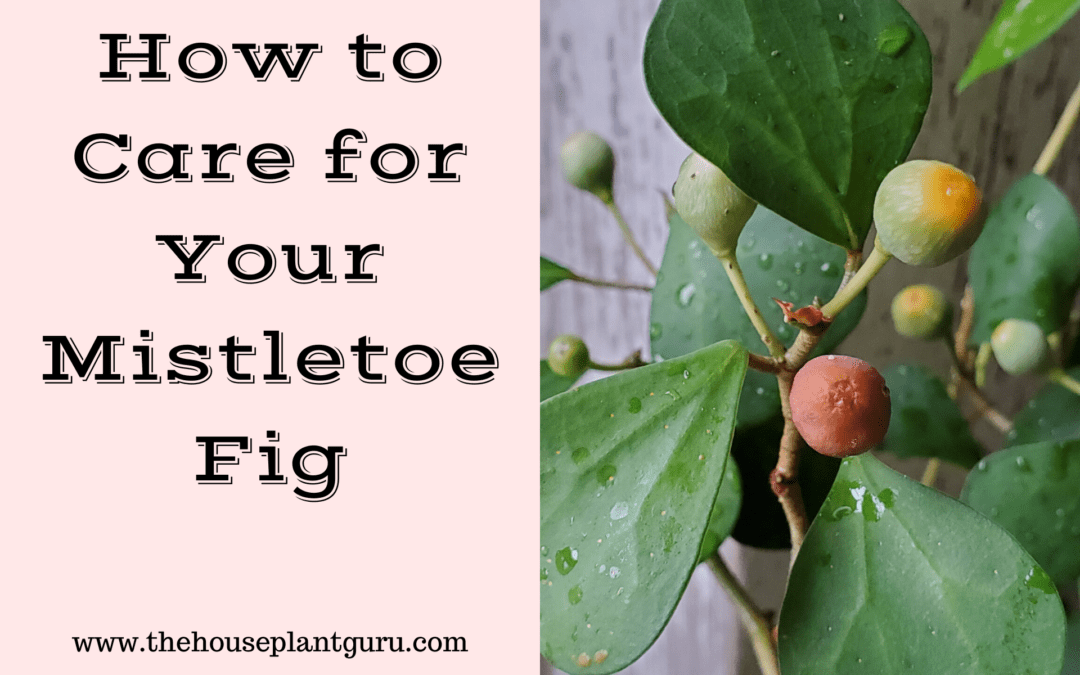 During this stressful time, I find that working with my plant is my best relief and frankly, my joy. I’ve been in some stage of writing a book for the last four years and I am not exaggerating when I say that my houseplants and house have suffered. Isn’t it weird that I was writing about houseplants and yet my own plants were being put on the back burner? I turned in the final edits of my third book yesterday and now I can spend some much needed time with my plants. If you follow me on Instagram, I shared some pictures of my kitchen area a couple of days ago, where I have over 50 houseplants. Today I decided to clean off my antique sewing machine/plant stand and rearrange and repot plants in my south window. Eventually, I will get all the windows clean and the plants groomed. I started with my mistletoe fig or Ficus deltoidea. 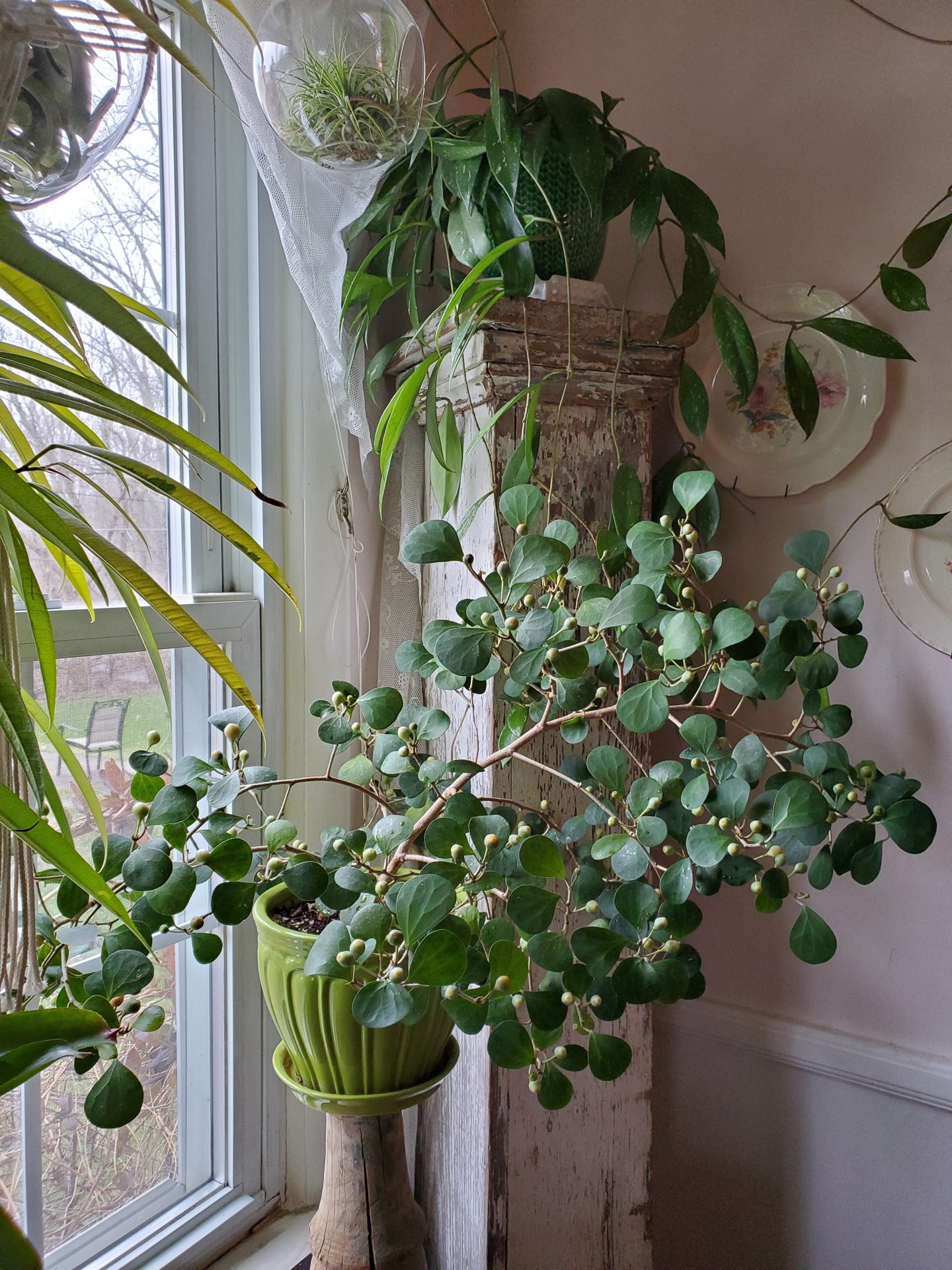 I’ve had this plant for quite a few years and it has been growing great in this southern exposure window. It has grown a lot since I bought it I’ve up-potted it once, and now today I needed to do it again.

It isn’t a very good picture, but I chose a pot (left) not much bigger than the one it had been in (right). I find it dries out faster than my other plants and I have to water more than usual, so I took it out of the pot and checked the roots. It wasn’t crazy root bound but I decided a bit bigger pot wouldn’t hurt. (I watered the plant in the shower and that’s why it is wet.) 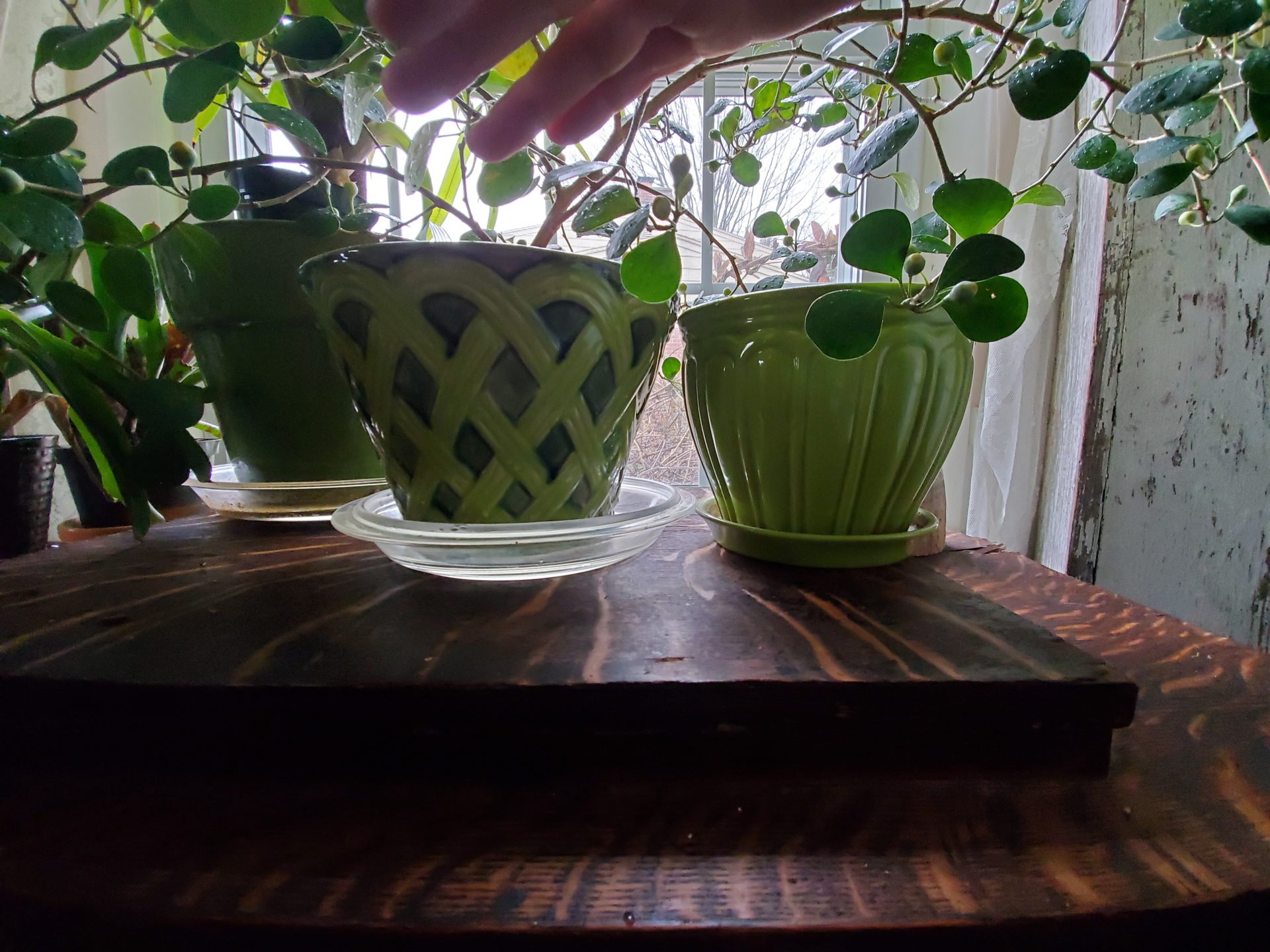 I chose a pot just a bit bigger for my ficus 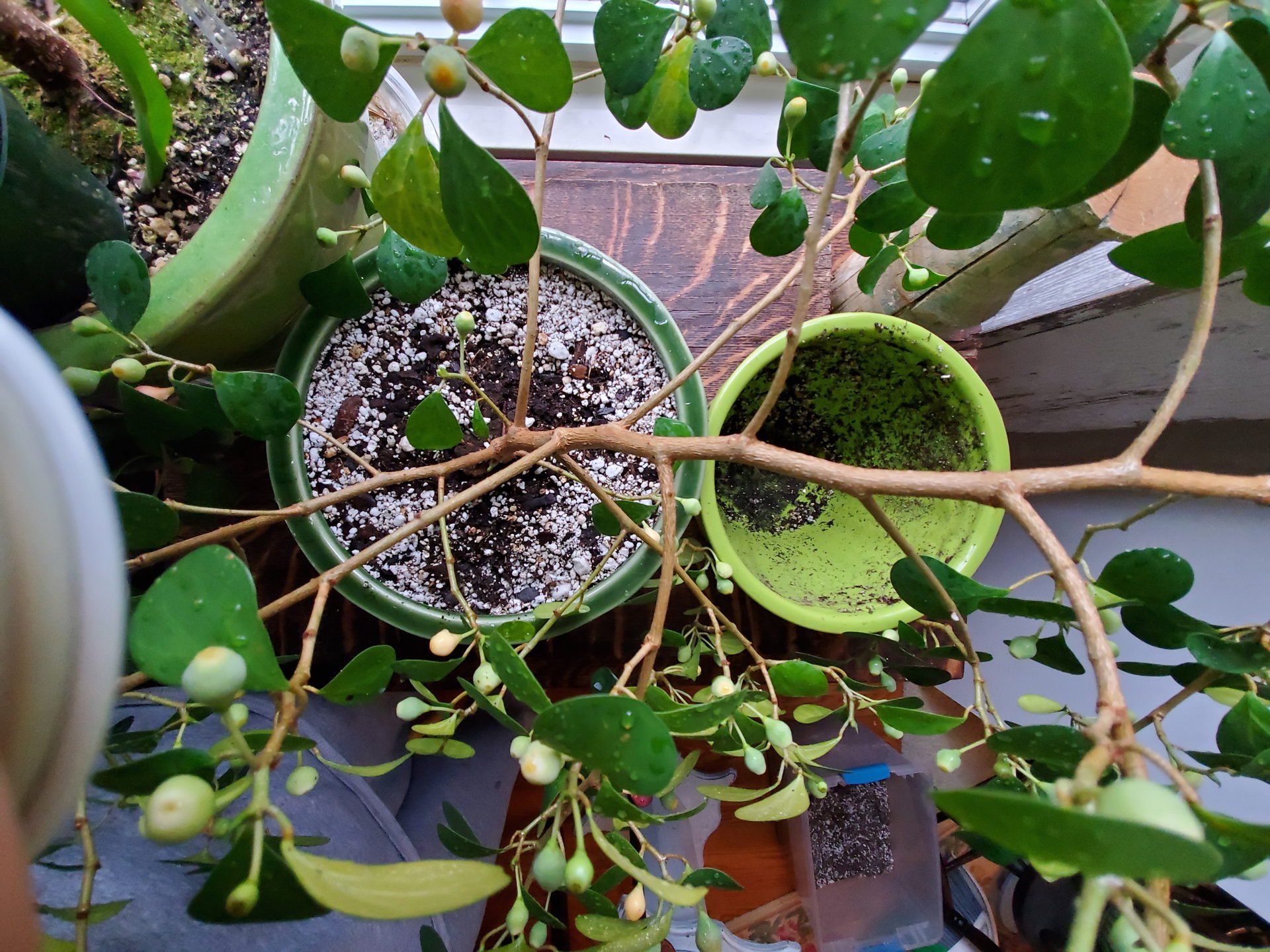 The Ficus deltoidea or mistletoe fig is so named because of the white berries it gets which makes it resemble a mistletoe plant and also because it naturally grows as an epiphyte in its natural habitat in SE Asia. The real mistletoe plant grows on and parasitizes its host plant and you can read more about it here. The mistletoe fig is an easy plant and unique with its triangle-shaped leaves and berries that start out white and turn red. 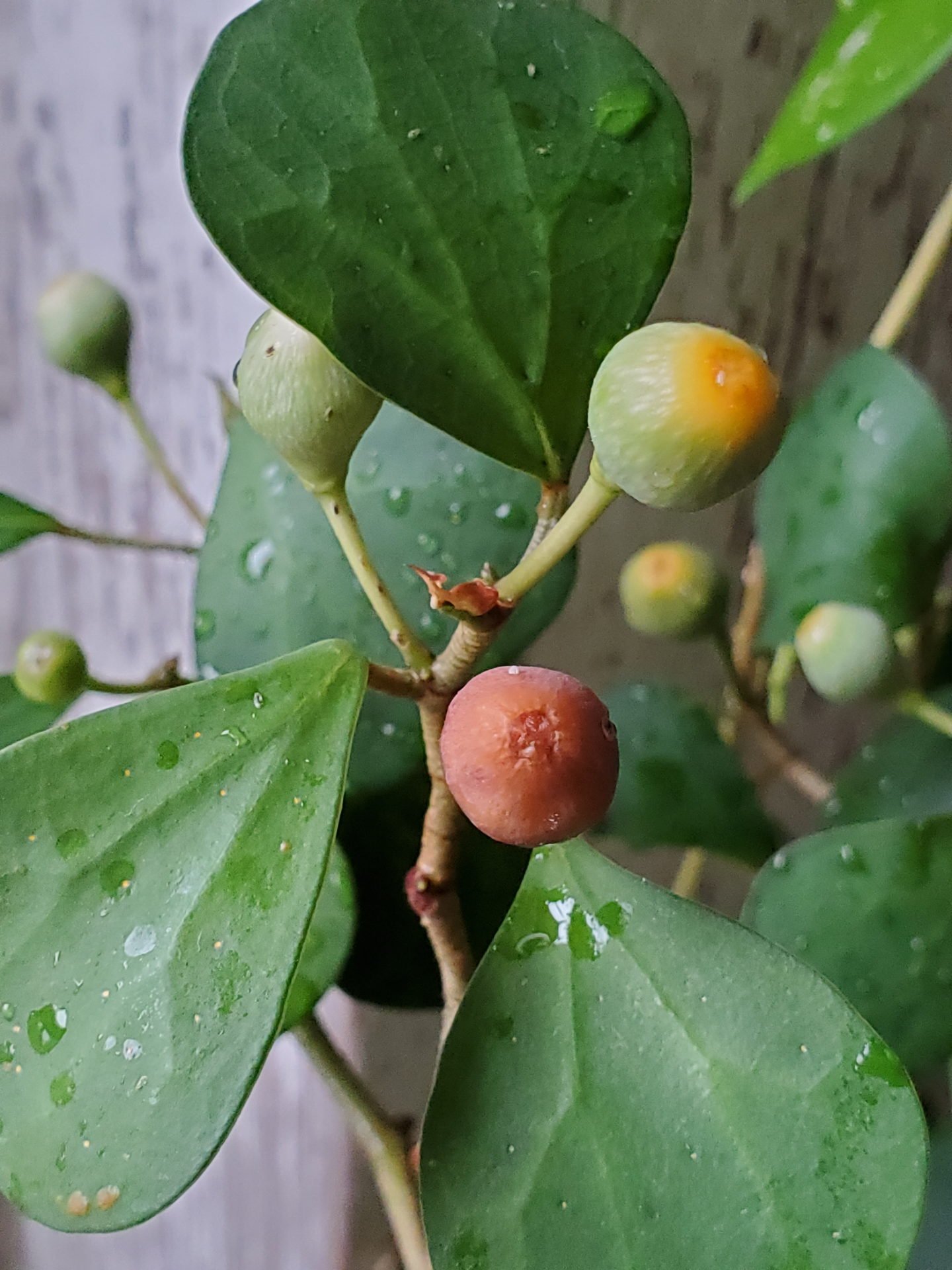 The berries start out white and then turn red 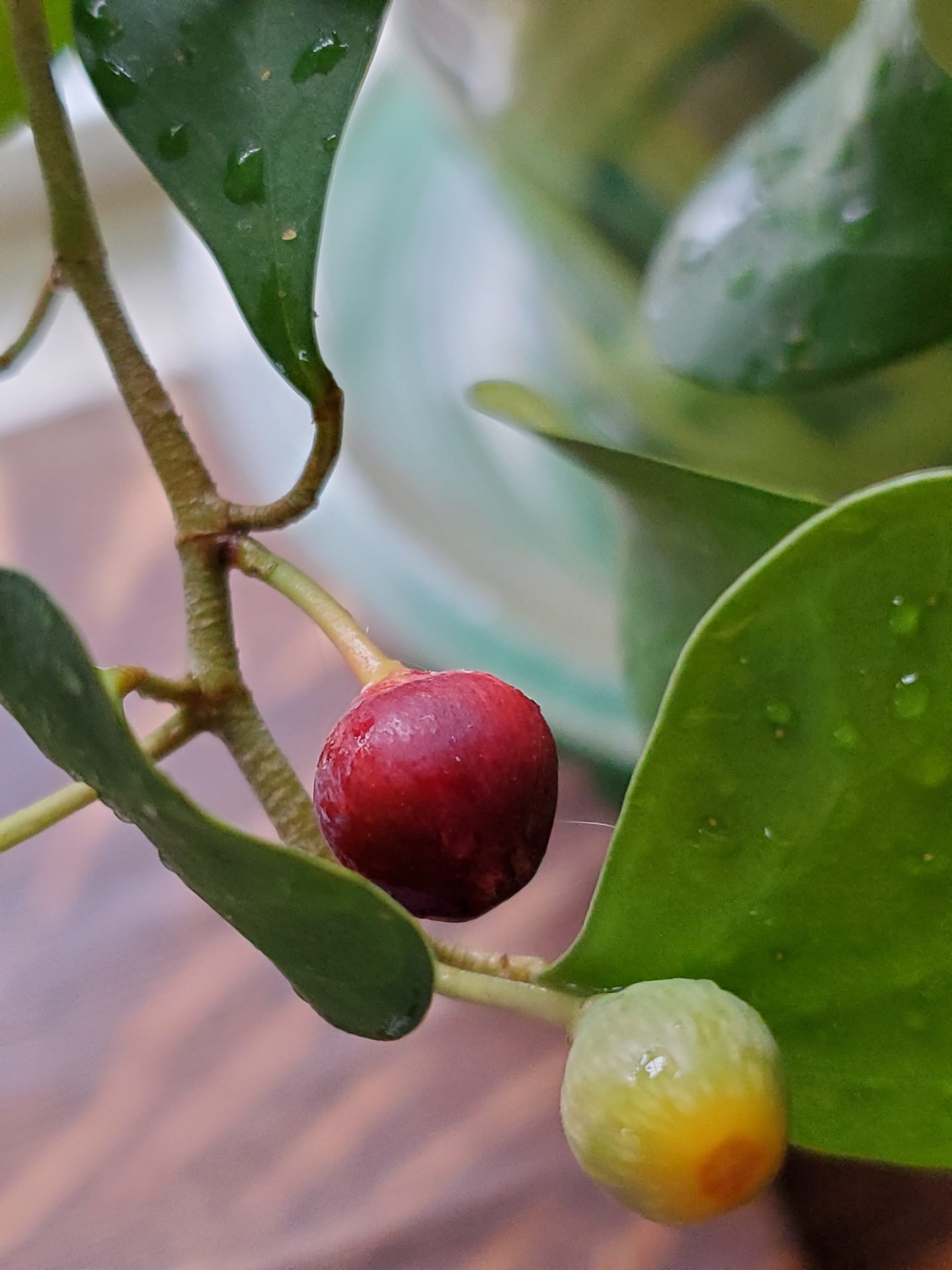 The berries are very attractive

When I repotted the plant I used some systemic insecticide in the mix as I think it may have a small amount of scale on the leaves as you can see in the left picture above on the lower-left edge of the leaf.

Though there is scale on the leaf above, on the leaf below you can see some small dots that appear to go through the entire leaf. These are called hydathodes which are modified pores on the leaves. Guttation happens through these “pores” which means extra water escapes through these small openings. 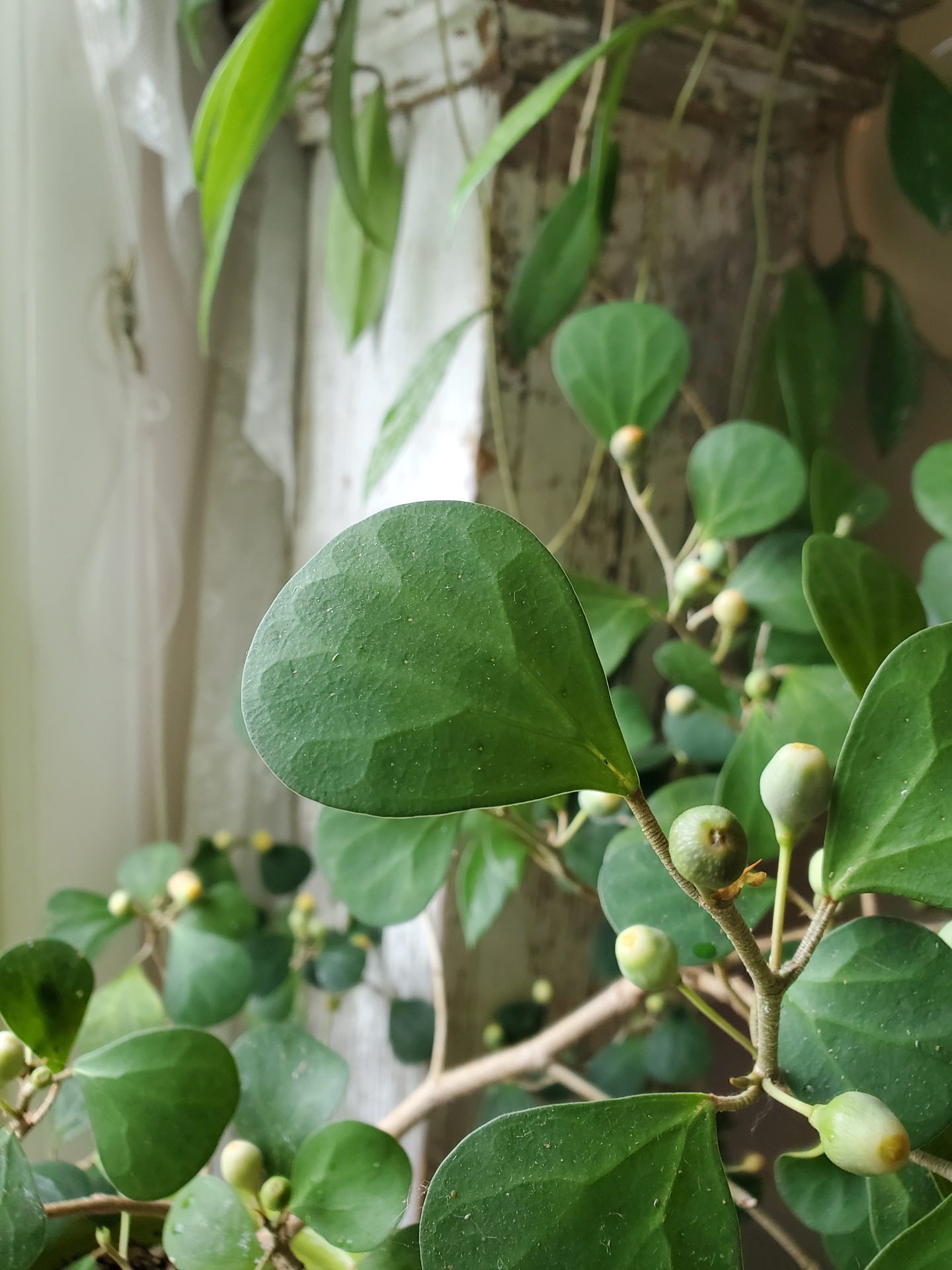 Mistletoe fig leaf -notice the dots in the leaves

With all this fruit, why haven’t I ever showed you the flowers? Because they aren’t able to be seen. Figs are considered false fruit or composite fruit. The flowers and seeds grow together in an enclosed capsule and the flowers can’t be seen unless the fruit is cut open. So weird. 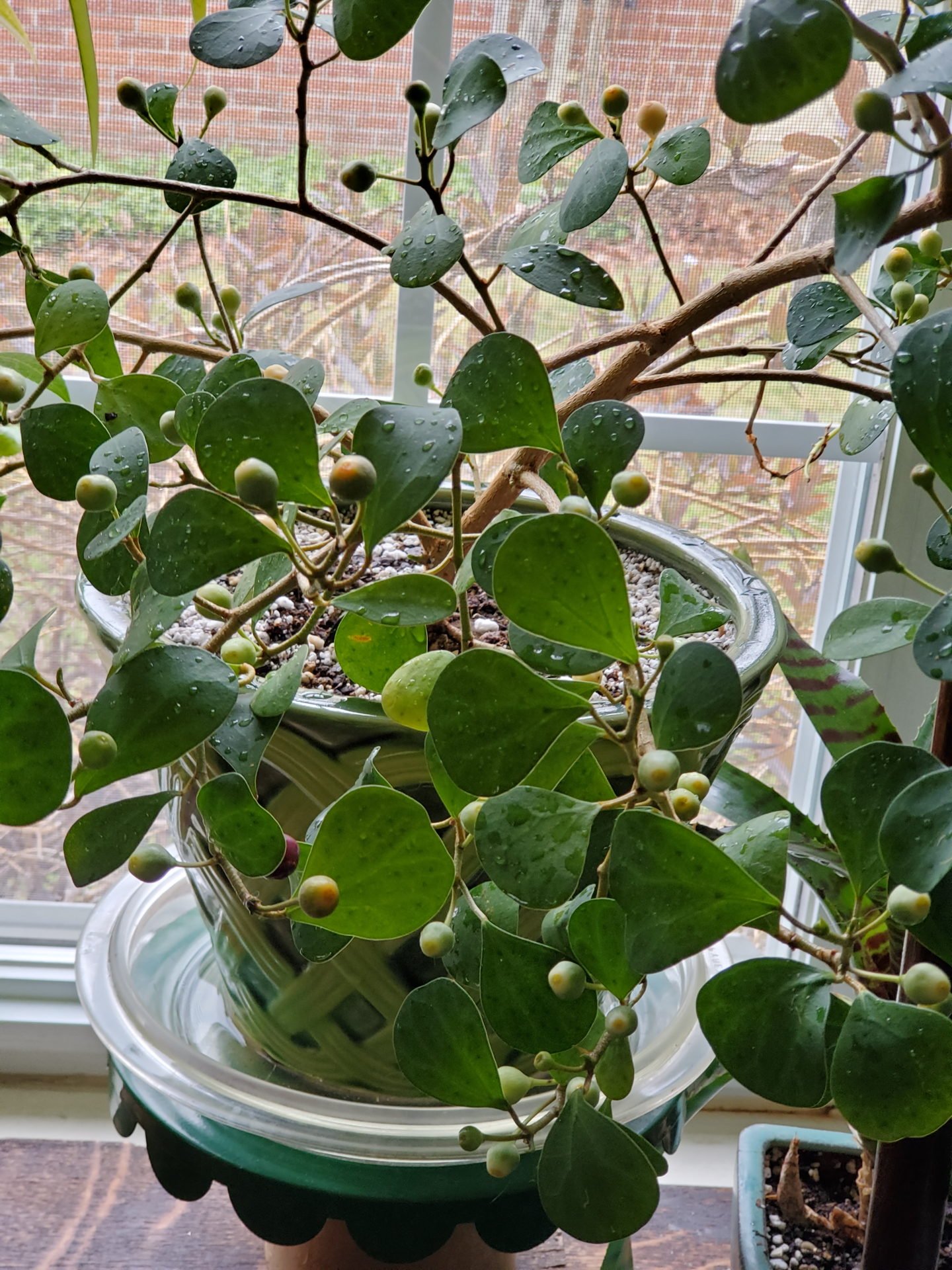 My fig is growing in a south window and is growing well. I have let it dry out more than once though and it has developed a few yellow leaves. I’m hoping that by up-potting it into a bit larger pot, it may help. It needs to be allowed to dry out quite a bit, but not become completely dry. Because of its thick leaves, it can tolerate drying out (as I can attest to) but may react with a few yellow leaves. This is a good plant if you are a forgetful plant parent. I can personally attest to the fact that this plant has been allowed to dry out more than once and though I don’t like yellow leaves, it hasn’t died and is doing remarkably well. You can see that a few yellow leaves haven’t really affected the plant overall. It’s still full and looks great.

If you can find this plant, buy it. Here is another post about many other great plants in the ficus family. It’s a wonderful group of plants, some easier to grow than others with creeping plants as well as large trees. You should be able to find a ficus that will work for you. Do you already have one? Or two?