Did You Know a Sinningia is Related to the African Violet? 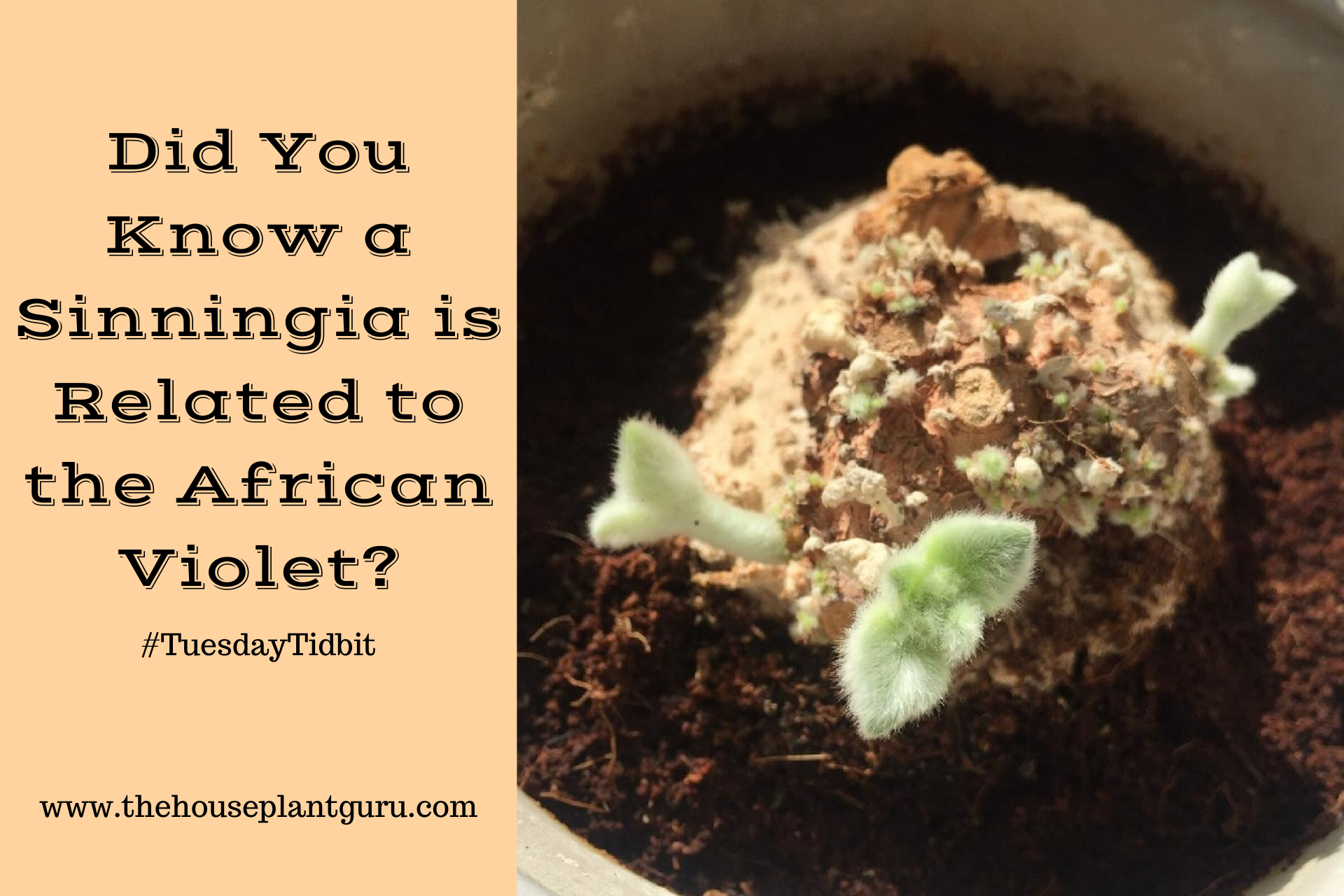 I was at the Hardy Plant Society (I love outdoor plants, too.) meeting in early February, and was approached and asked to identify a houseplant, or actually a couple of small leaves growing from a knobby looking thing. I drew a blank, but it finally came to me. (This old mind doesn’t work as fast as it used to.) It was a sinningia (sin IN jee a) tuber. What is a sinningia? ( All the pictures other than the gloxinias were taken by Dan VanDerAue.) 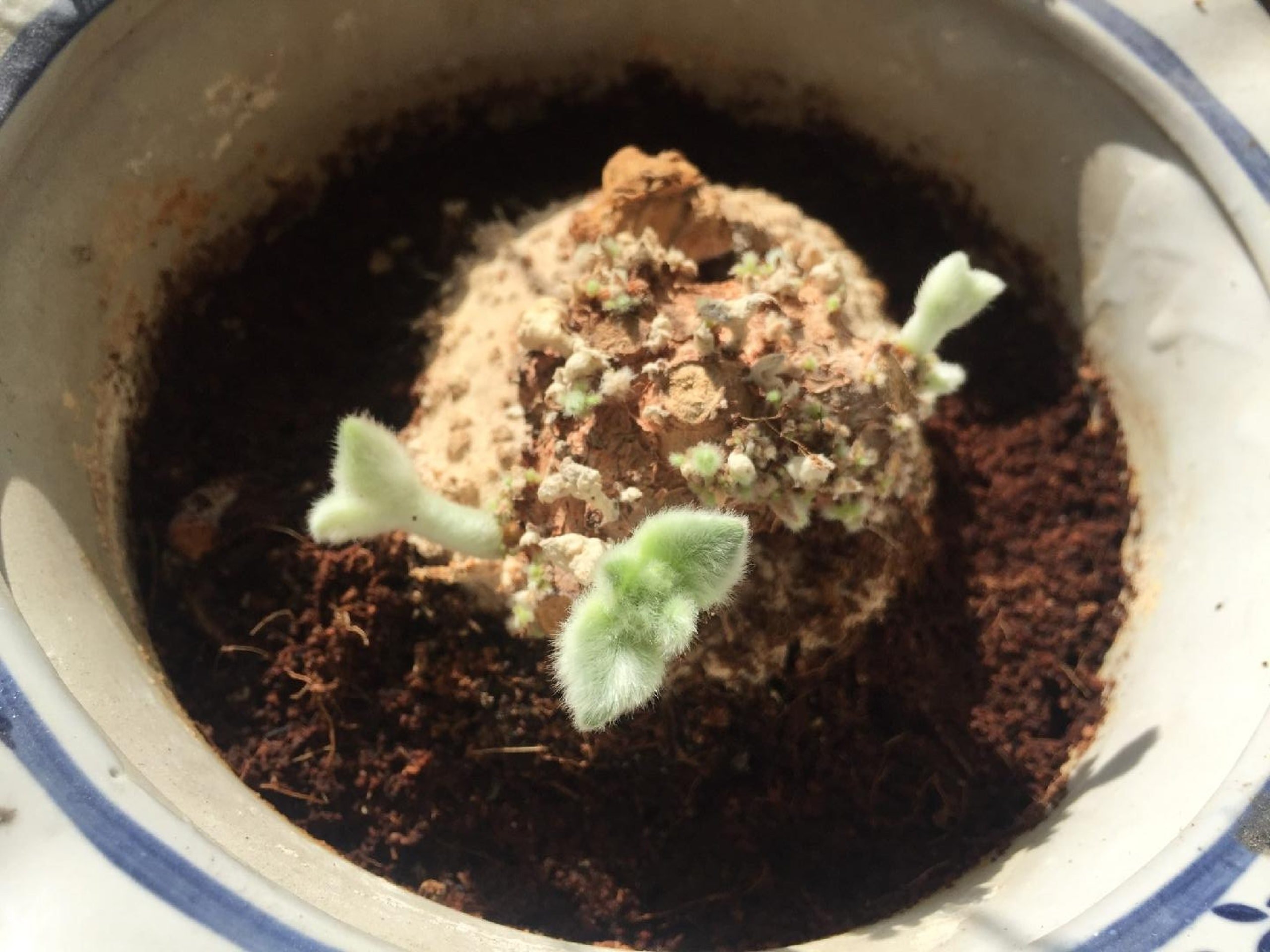 What is a sinningia?

A sinningia is a cousin of the African violet in the gesneriad family and the fuzzy leaves do resemble those of an African violet. Yet, it is different in that it hails from Central and South America instead of Africa and is often called Brazilian edelweiss. You may be familiar (if you are a bit older..) with the florist gloxinia, which is the common name for Sinningia speciosa, a once common plant that is coming back into vogue. I have included pictures of a couple of those from the 2012 African violet convention held here in Detroit. The flowers are huge and gorgeous. 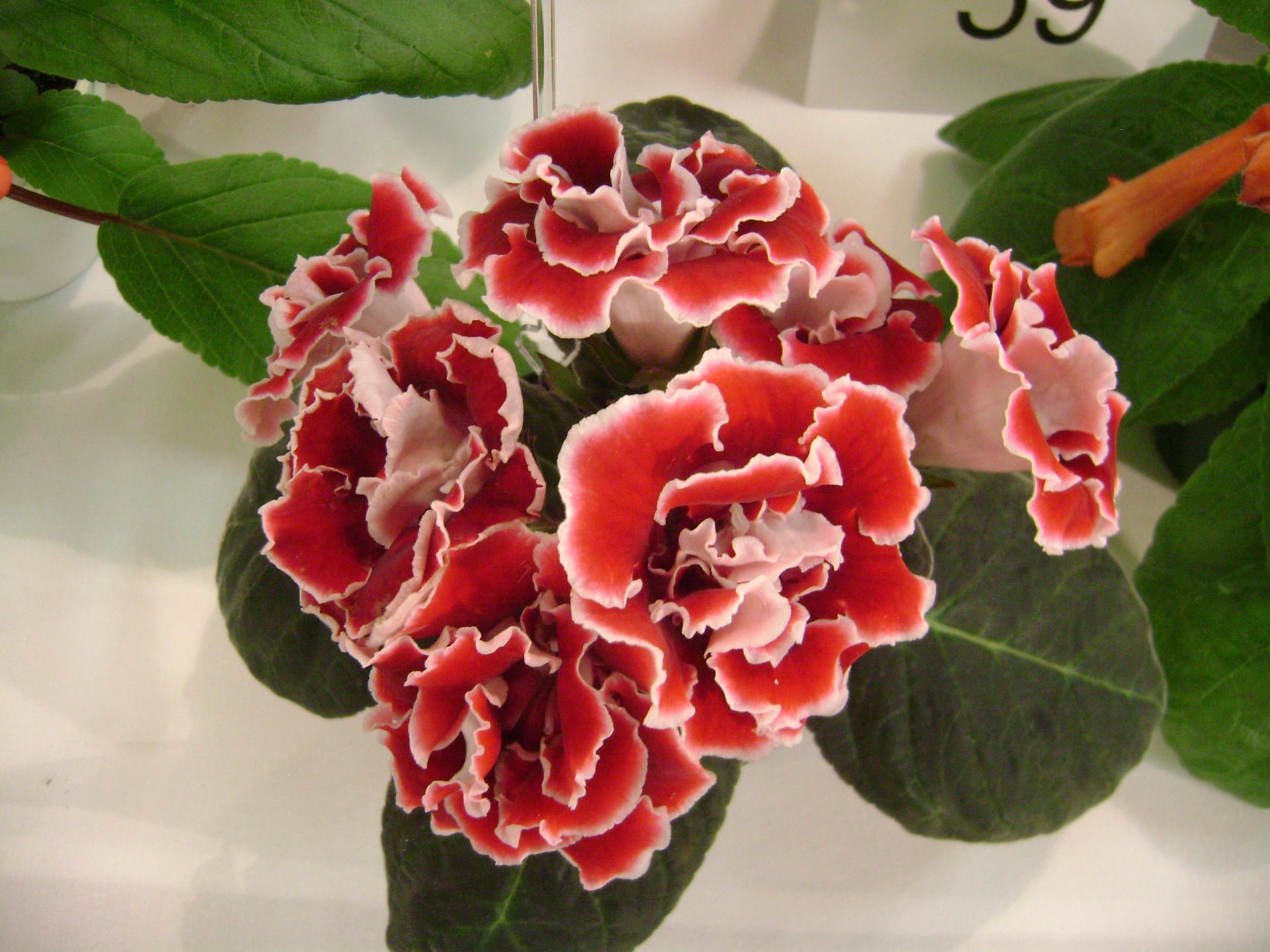 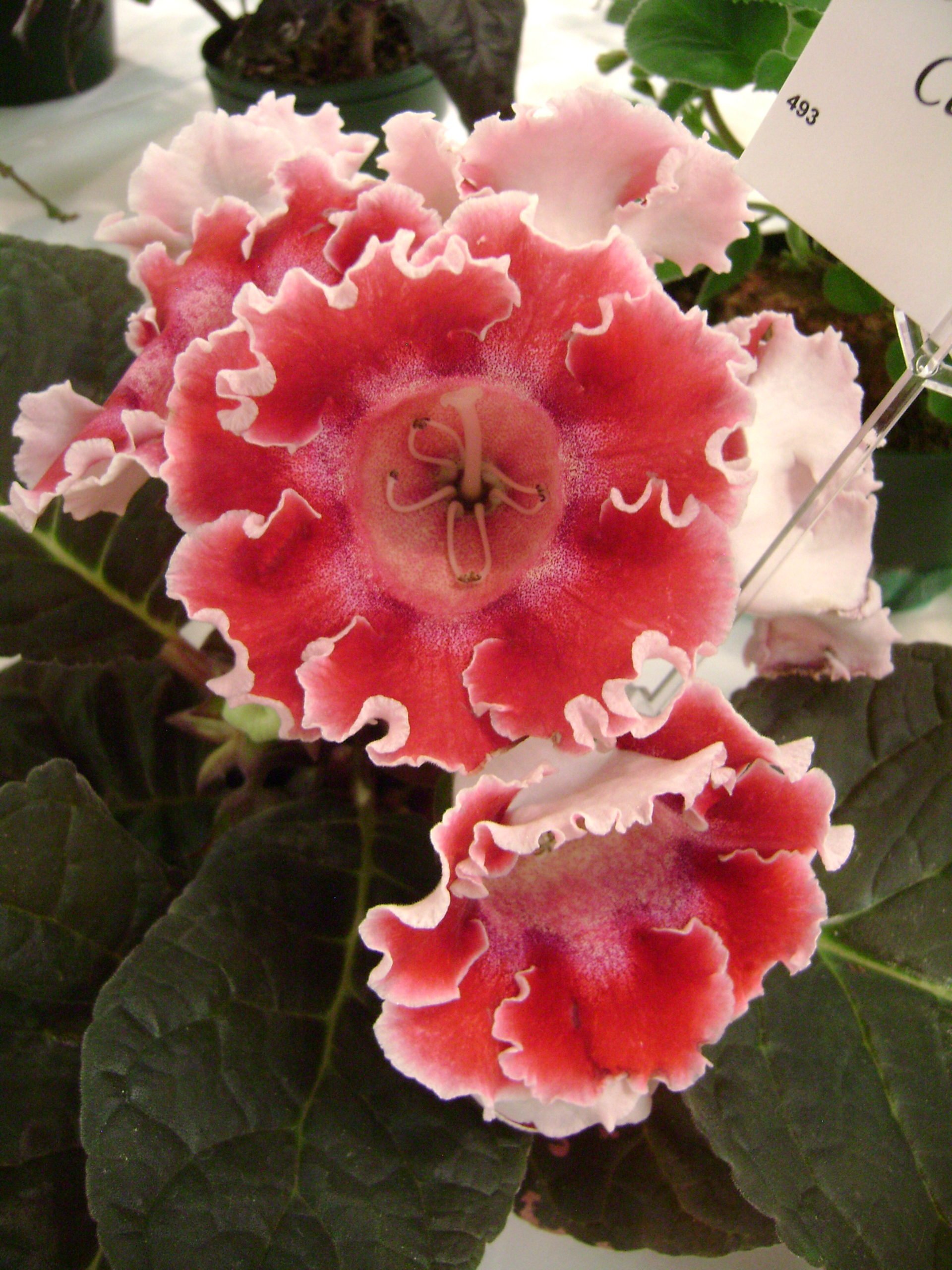 The sinningia plant grows from a tuber (Dictionary: a much thickened underground part of a stem or rhizome, e.g. in the potato, serving as a food reserve and bearing buds from which new plants arise), and is dormant for 3-4 months of the year. If you have cyclamen, you have probably experienced the dormancy thing. After coming up with the name of the plant, I got in touch with John VanDerAue, the man that asked me to identify the plant. This is his son’s plant and he was nice enough to ask his son for more pictures and he also shared how he grows this gorgeous plant. After research, they discovered it is Sinningia leucotricha. I love the orange flowers and those velvet-looking leaves. 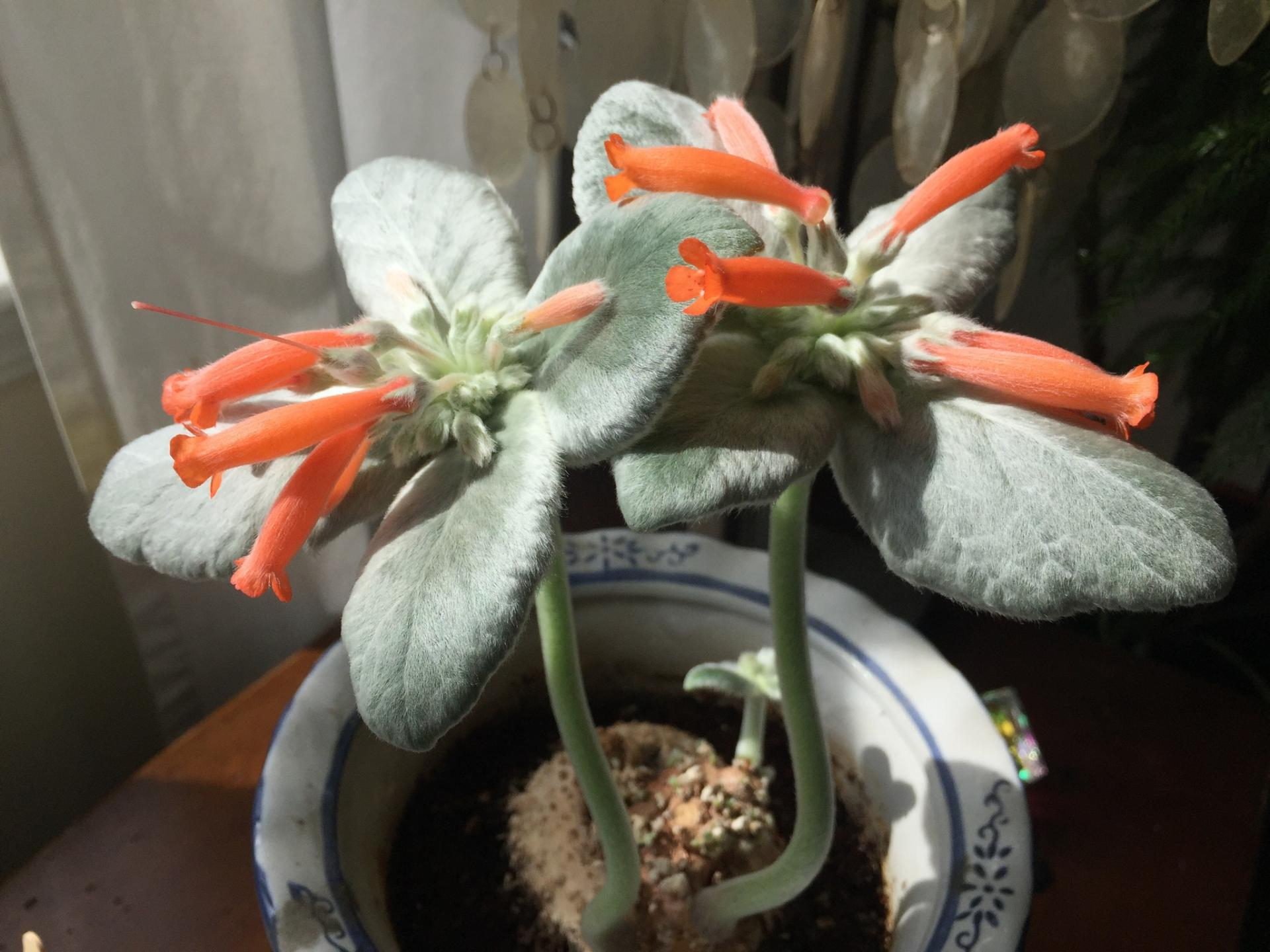 Sinningia leucotricha in flower in mid-March

Dan, his son, said the sinningia blooms once a year and the flowers remain on the plant for a few weeks. The leaves stay up all spring and summer, dying down around October, at which time it wilts and becomes brown and dry ” like lawn leaves”. When it is completely brown and ugly, he snaps off the dead stems, breaking them cleanly off the tuber. It then is moved out of its normal place in the window and stored further back in the room. When it starts growing again in early February, he moves it to a southwest window where it receives direct sun in the afternoon. By mid-March, it is in full bloom. He says it thrives on neglect, only getting water every month or two. 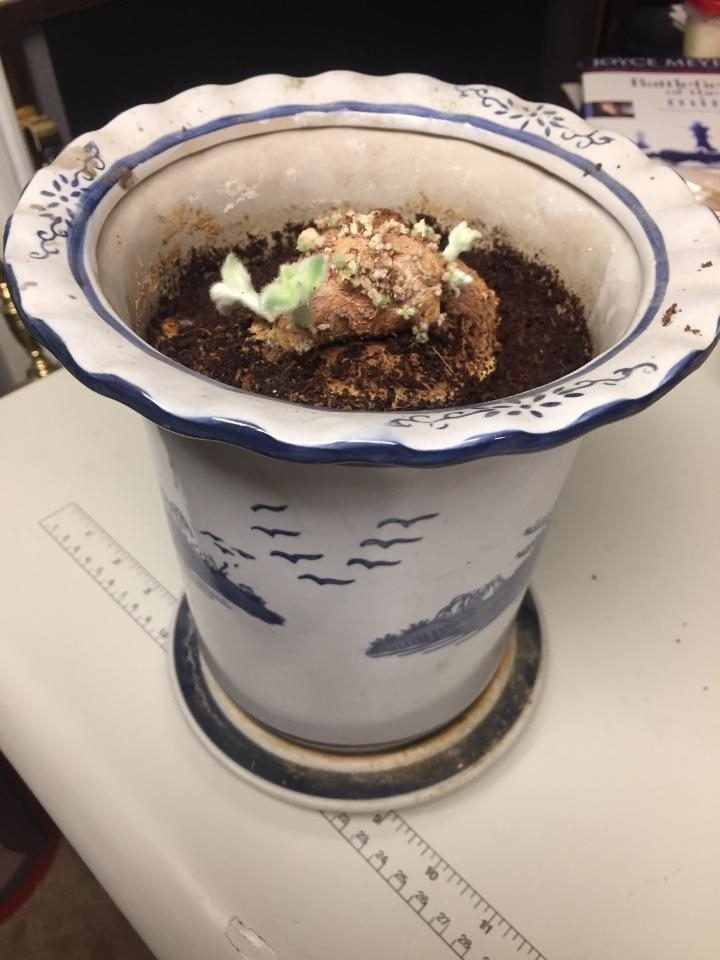 Here is the sinningia tuber in the container in early February

Care of the tuber

If you notice in the picture with the flowers, the backside of the tuber has sprouted but isn’t growing the same as the flowering stems. I reached out to Mel Grice, president of the Gesneriad Society , to find out if he had any tips about this plant. He told me that this tuber may crack this pot eventually, sooner than later. It would be beneficial to this plant if the tuber were planted in a larger pot and turned often to make sure all sides of the plant get equal sunlight. He recommends planting sinningias in a container two inches larger around than the diameter of the tuber. Mel said it is a good idea to repot the sinningia often, not necessarily to a bigger pot unless it needs it, but to refresh the potting medium. This should be done just as the plant is starting to grow in the spring.  For best results, use a potting medium that is used for African violets. 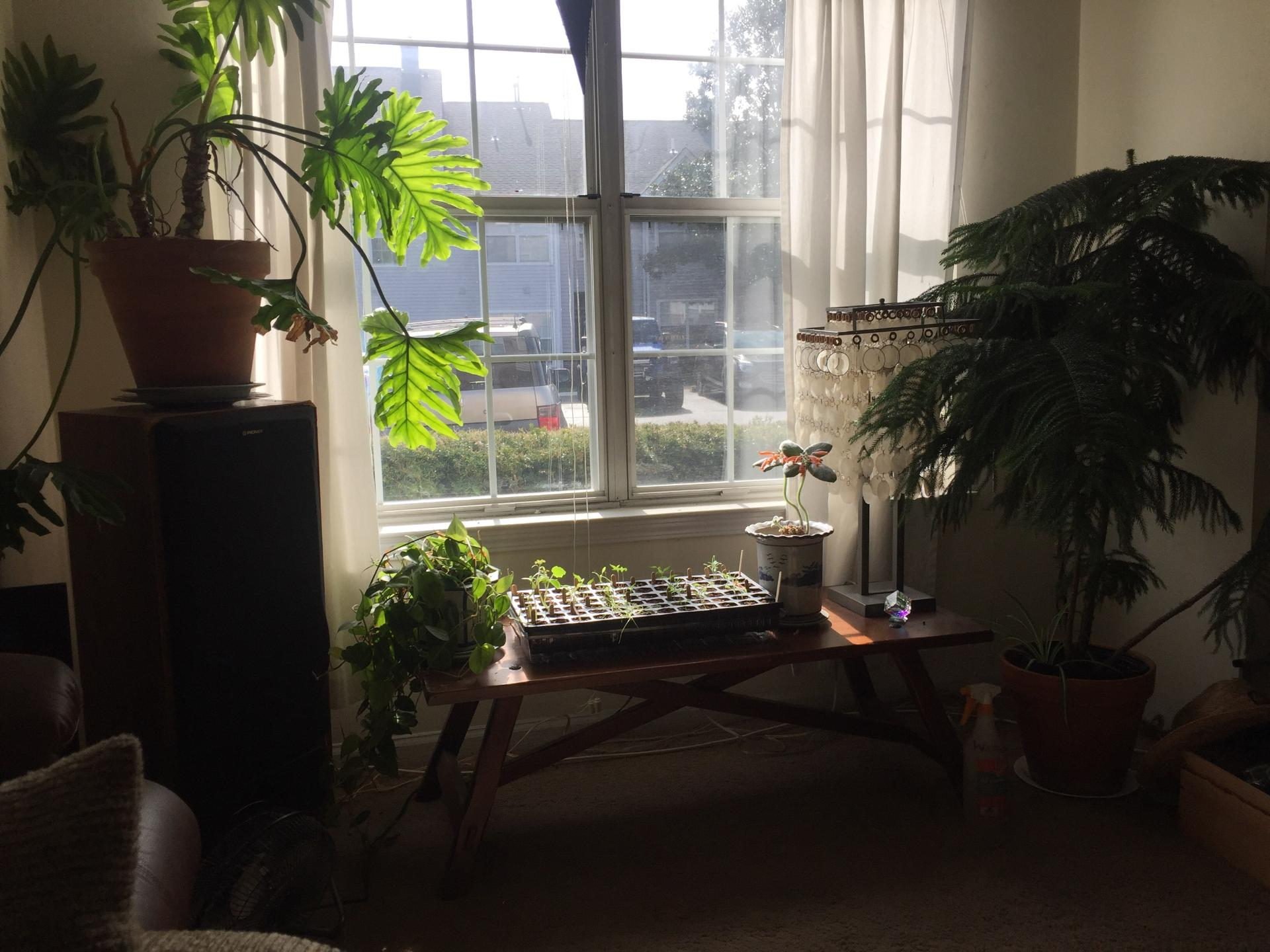 The sinningia is growing in the bright light of a southwest exposure.

I am so happy John approached me to help identify this plant. I loved learning more about it and seeing the way it grows. Don’t you just want to pet those fuzzy leaves? Have you ever grown a sinningia or a florist gloxinia?