How to Tell if Your Plant is Light Starved 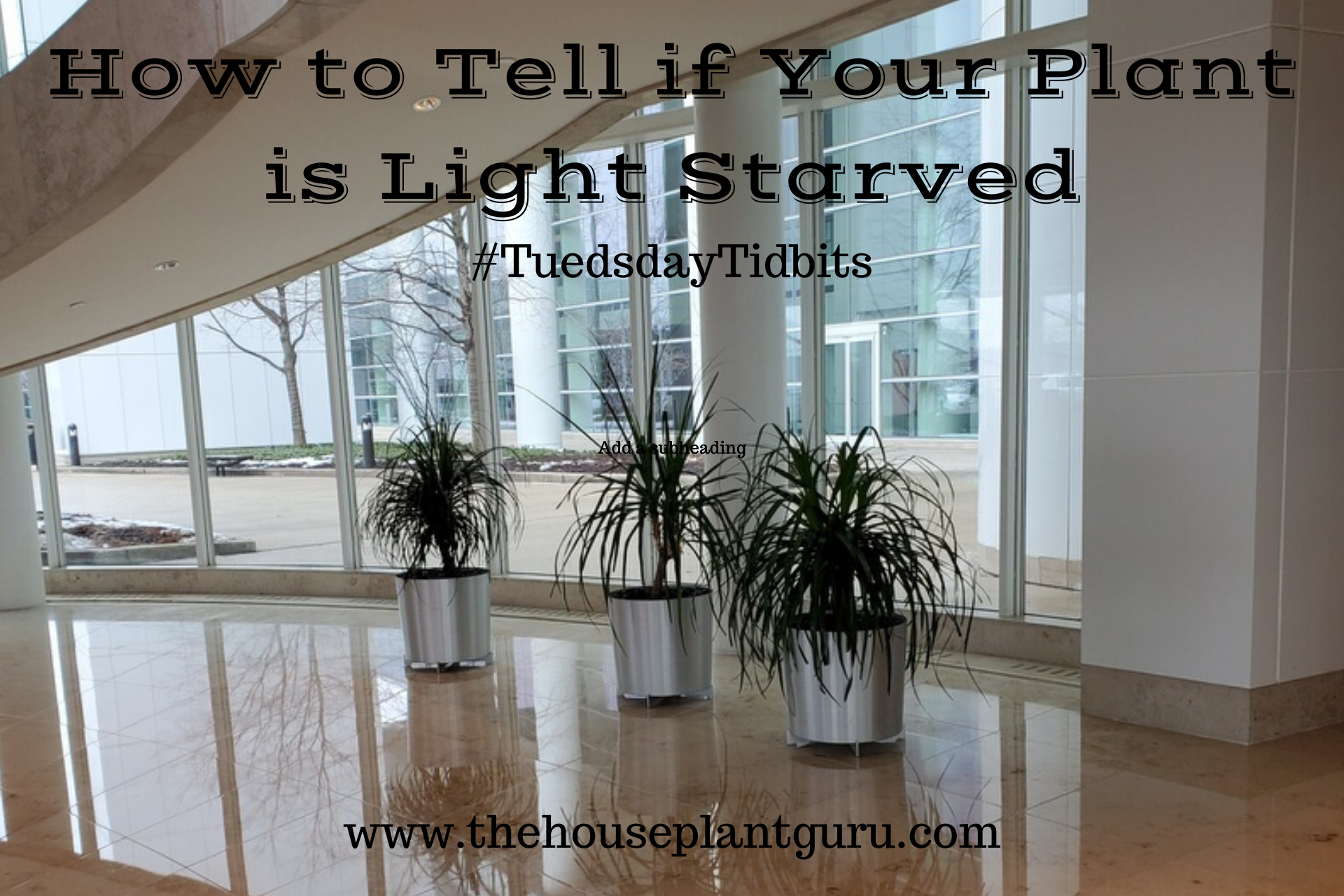 For this Tuesday Tidbit, we are going to talk about light starved plants. In particular ponytail palms, though the indicators would be the same for most plants. I was in Chicago last week attending the I Landscape show and saw these plants at my hotel. Of course, I always check out the plants wherever I am. The ones that captured my attention were the ponytail palms. Why? Because I could tell they were not doing as well as they could be because they didn’t have enough light. So let’s talk about how you know your plants are starving for light. 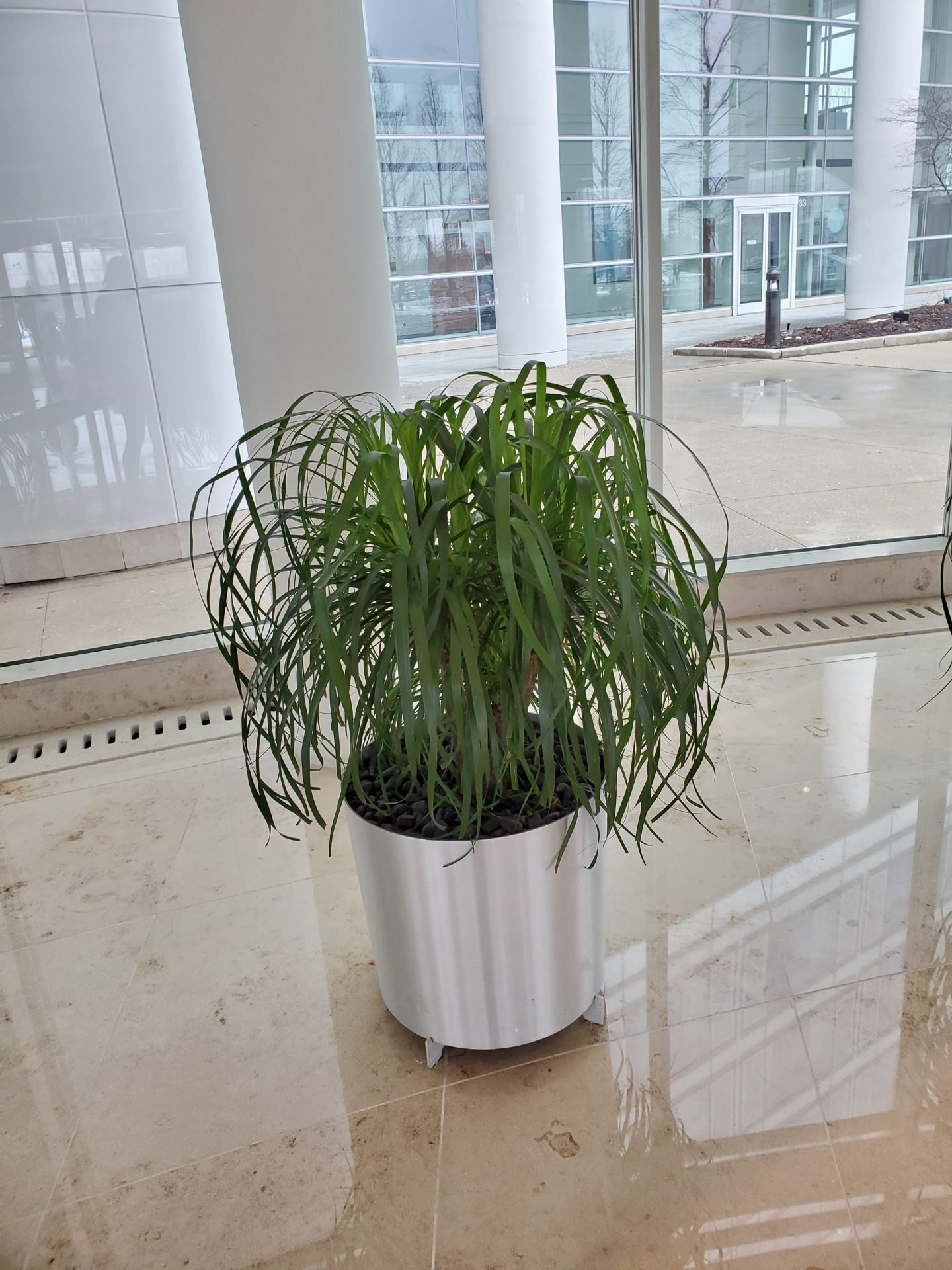 This ponytail palm doesn’t appear to have any problems.

Can plants be light starved? Yes. The only way plants can make food for themselves is if they have light. Without light, they will starve. These plants are taken care of by an interior plant company, so when plants begin to look unhealthy, they replace them. The plant above looked as if it had recently been replaced. How can I tell? It looks like it is supposed to. The leaves look the right color and are standing up straight in the middle. The plant below has much more droopy leaves than the one above and the middle leaves are reaching for the light. Often the signs aren’t as obvious as others. Normal light deprivation signs would be plants leaning toward the light, yellowing leaves, or falling leaves. But sometimes the signs aren’t so obvious to the untrained eye. I immediately noticed these plants upon entering the hotel and realized they definitely needed more light. 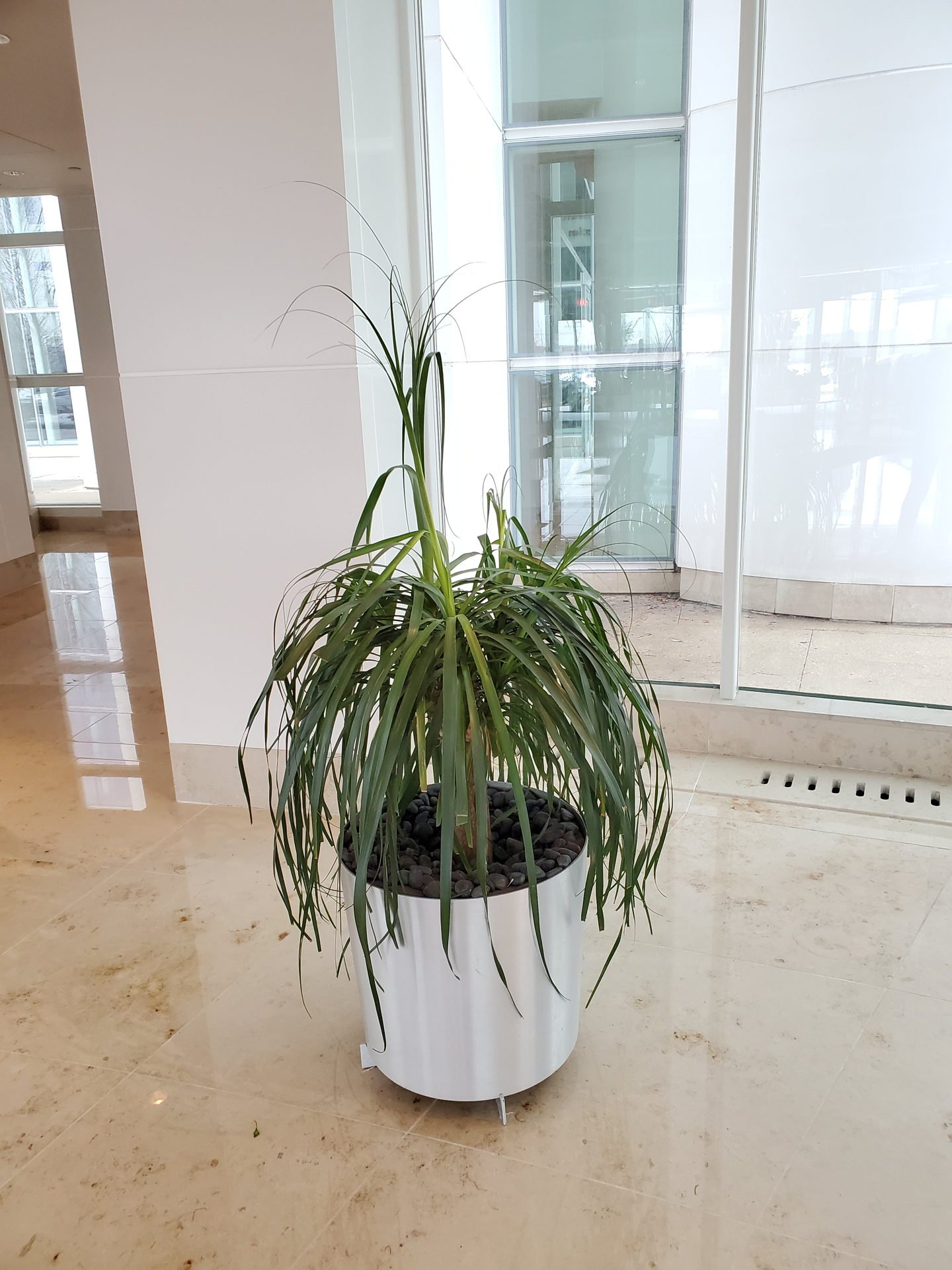 The plant we are considering today is the ponytail palm or Beaucarnea recurvata. I have one that I have had since I took it to college in 1984 in a 2″ pot. Here it is today and read about how I up-potted it last year. These plants are native to Mexico and live in full sun where they can grow to 20′ or more. They may reach up to 6′ or a little taller in your home. Mine is almost that 6′ tall. So in our homes, it needs to be in as much light as you can provide them so a south or west exposure would be best.

So what does a healthy ponytail look like? Though it does have a weeping habit, the leaves at the top usually point up with a small amount of curvature. The leaves are thick and have a slightly rough texture, starting out wider at the stem and get smaller in size until they come to a sharp point and can grow up to 3 feet long or more as the plant gets larger. The huge bulbous caudex or water-storing stem resembles an elephant leg and that resemblance is where it gets its other common name, elephant foot.

This variegated ponytail below was seen at Ted’s Greenhouse near Chicago this past week. It is a beautiful specimen. It has plenty of light and the leaves are doing what they are supposed to be doing. Isn’t it gorgeous? 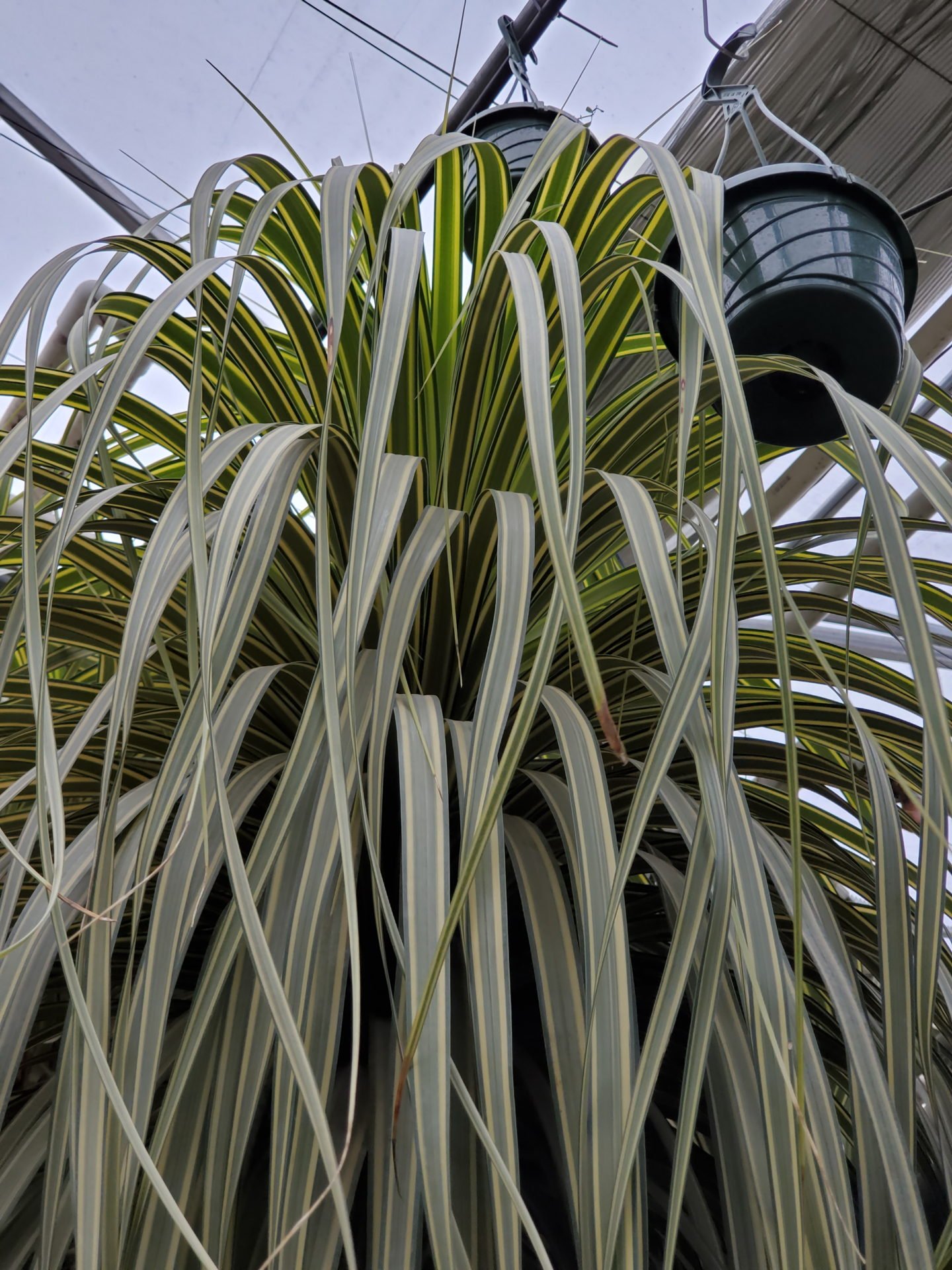 Up close of side shoot

The ponytail palm below is the one that first noticed. It is a sad plant and it needs more light. The leaves are soft, thin, and more droopy than they should be. Because the leaves are thin, they bend instead of gently curving over like a fountain. They do not have enough energy to grow the way they are meant to and are growing wider than normal to capture as much light as possible. 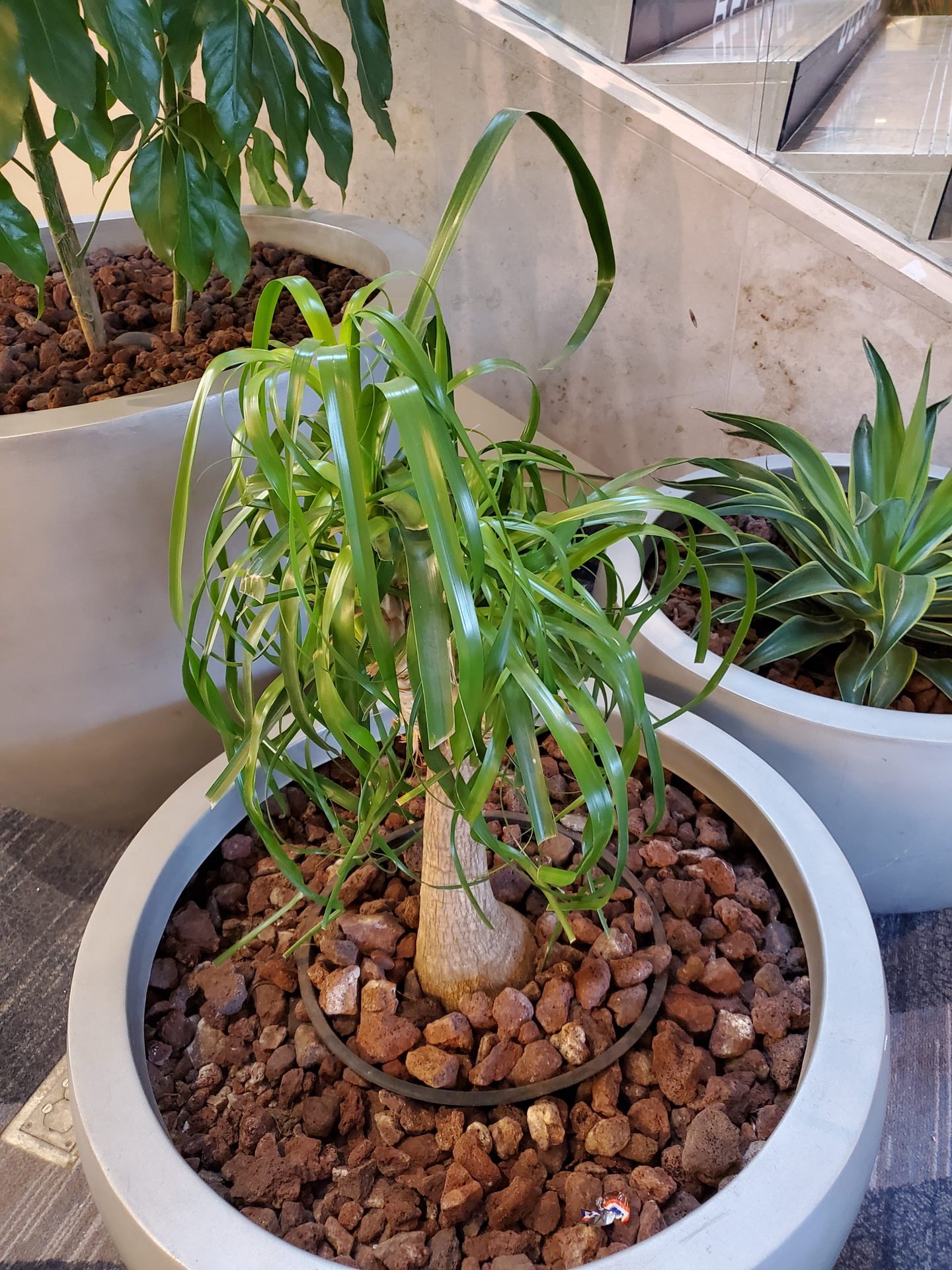 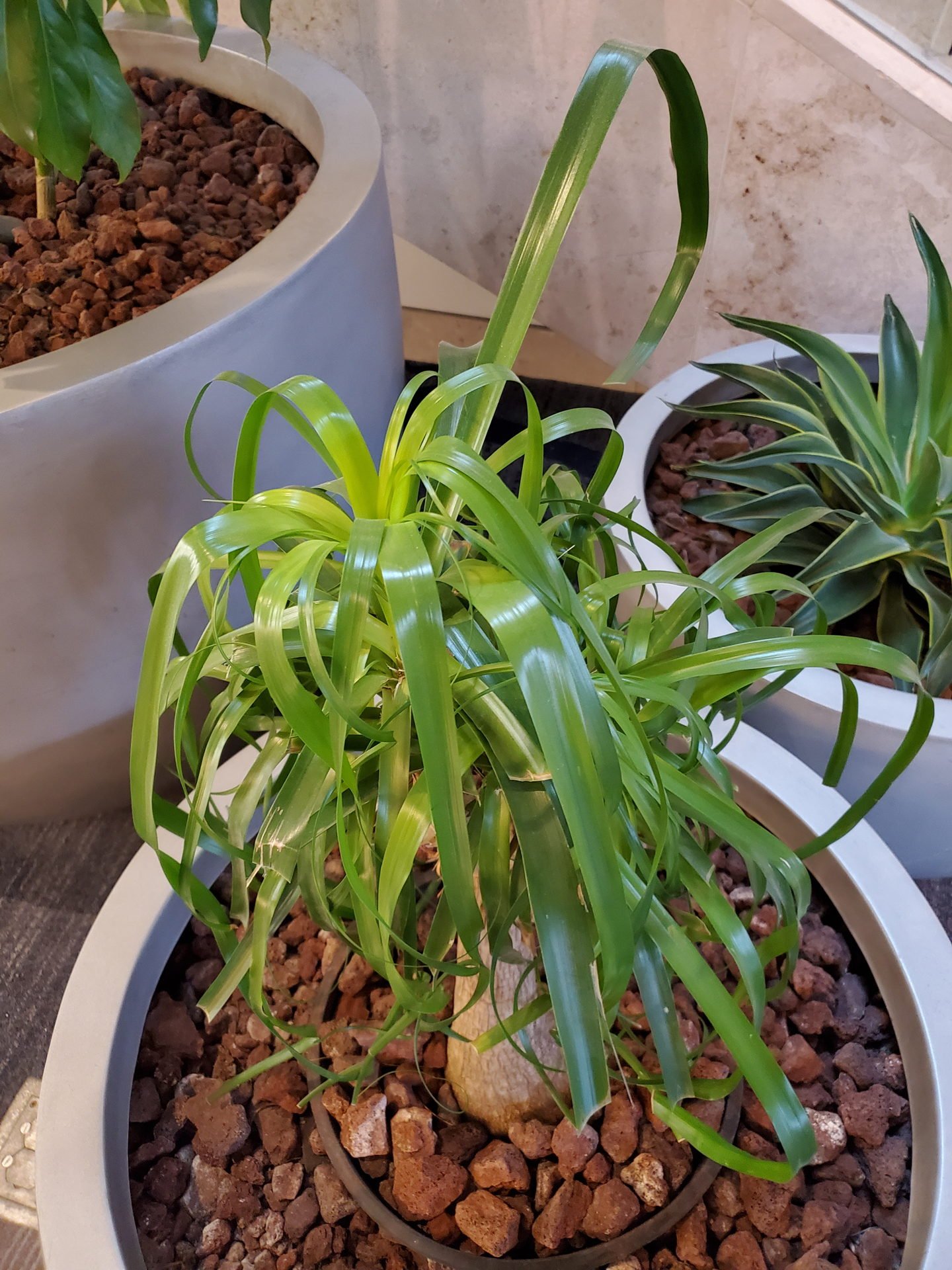 A closer picture of the light starved ponytail palm 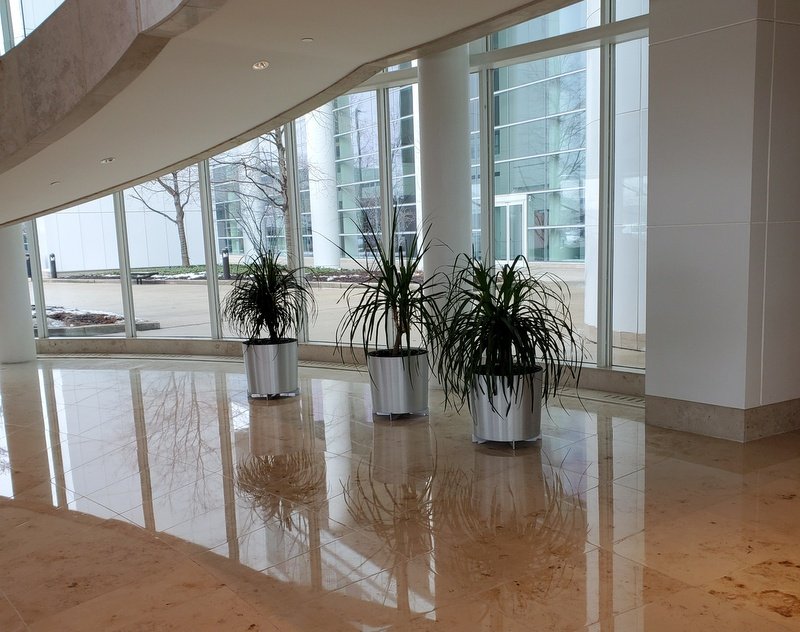 Lots of windows but these plants under a stairwell need more light (The middle one is a yucca that also needs more light.)

Could different plants have been used in this setting? Of course. The size of the foyer and a large number of windows would lead anyone to believe a high light plant would do well in this situation, but the stairs above are blocking a lot of the light as is the building itself. This was on the north side of the building and the foyer area was an annex of the building so much of the light will be blocked from the south. What could have been used? Any sort of aglaonema, dracaenas, or large spathiphyllum lilies would have worked well, in my opinion.

The lesson learned here is to pick the right plant for the light you have to offer. If your plant starts showing signs of thinning leaves that can no longer stand on their own, or other signs that it isn’t receiving enough light, it is time to move it.

Pay attention to what your plants are trying to tell you and if you give them what they want, you are on your way to having healthier, happier houseplants!