What To Do With An Amaryllis In A Box 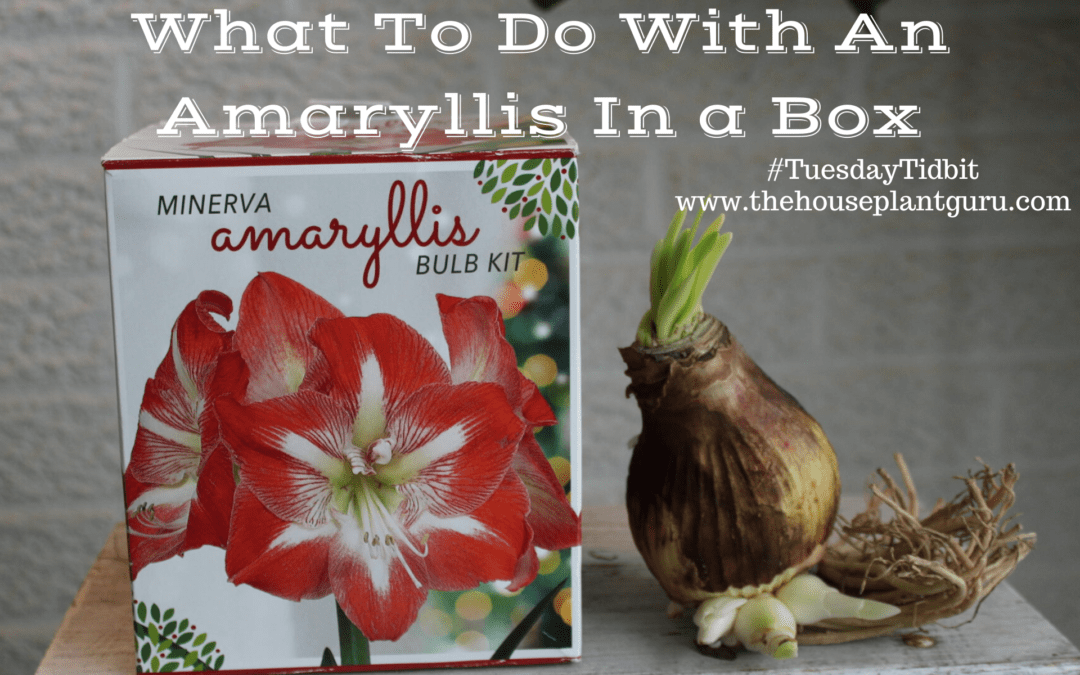 I was in Kroger buying ingredients for my New Year’s recipe, and I couldn’t pass up this boxed ‘Minerva’ amaryllis (hippeastrum). It was 1/2 off and only $3.99. (It is extremely hard to pass by the holiday cactus…but I did.) I decided to share with you what was inside and what to do with it. Many of you may have received one of these as a gift. Lucky you! I’m going to show you what to do with an amaryllis in a box. 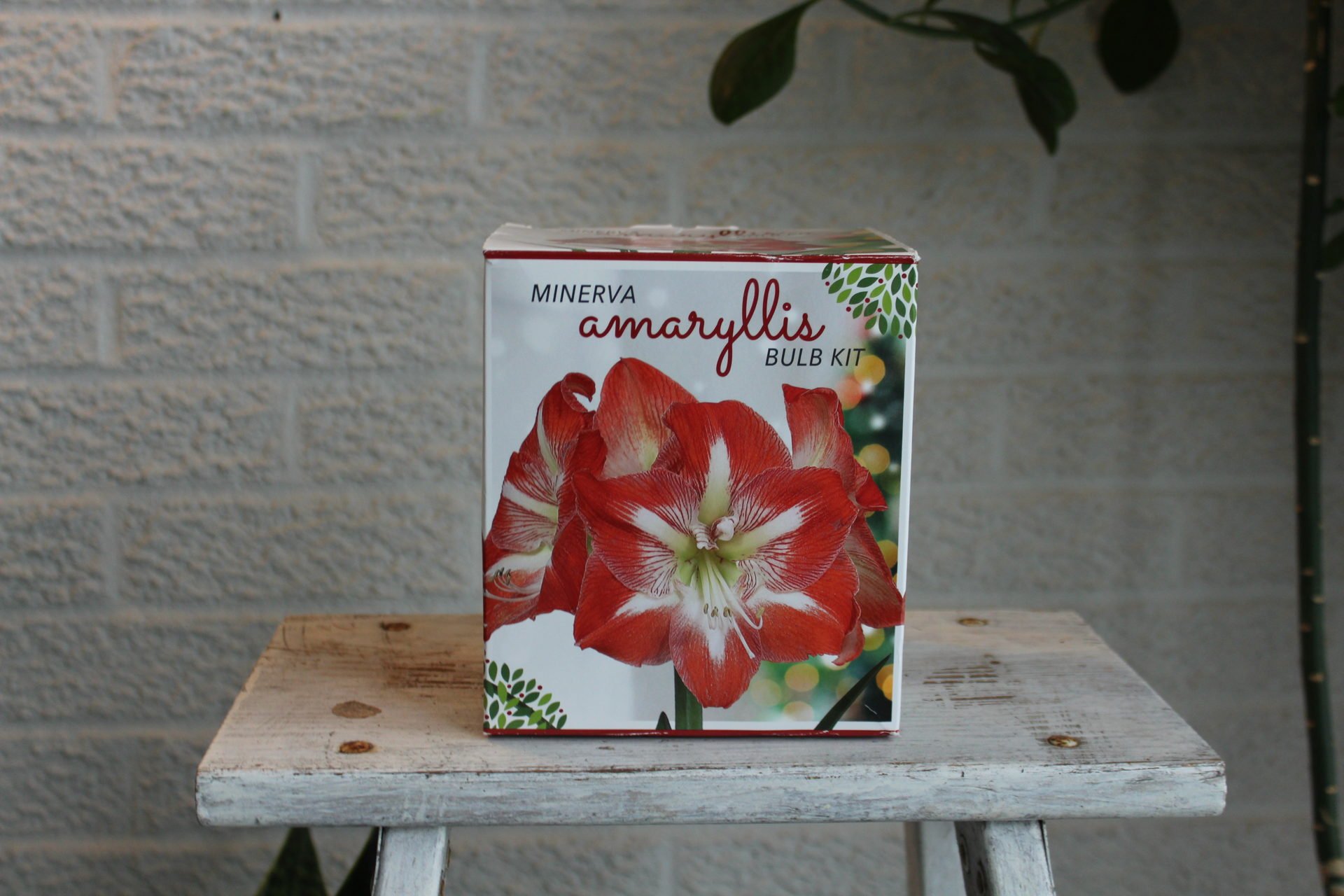 I found this boxed amaryllis at Kroger for $3.99

What is in the box?

First, open the box and see what you have. Many times the box top is already open as the bulb is growing and busting out of the confines of the box. This one is growing but hasn’t escaped the box yet. 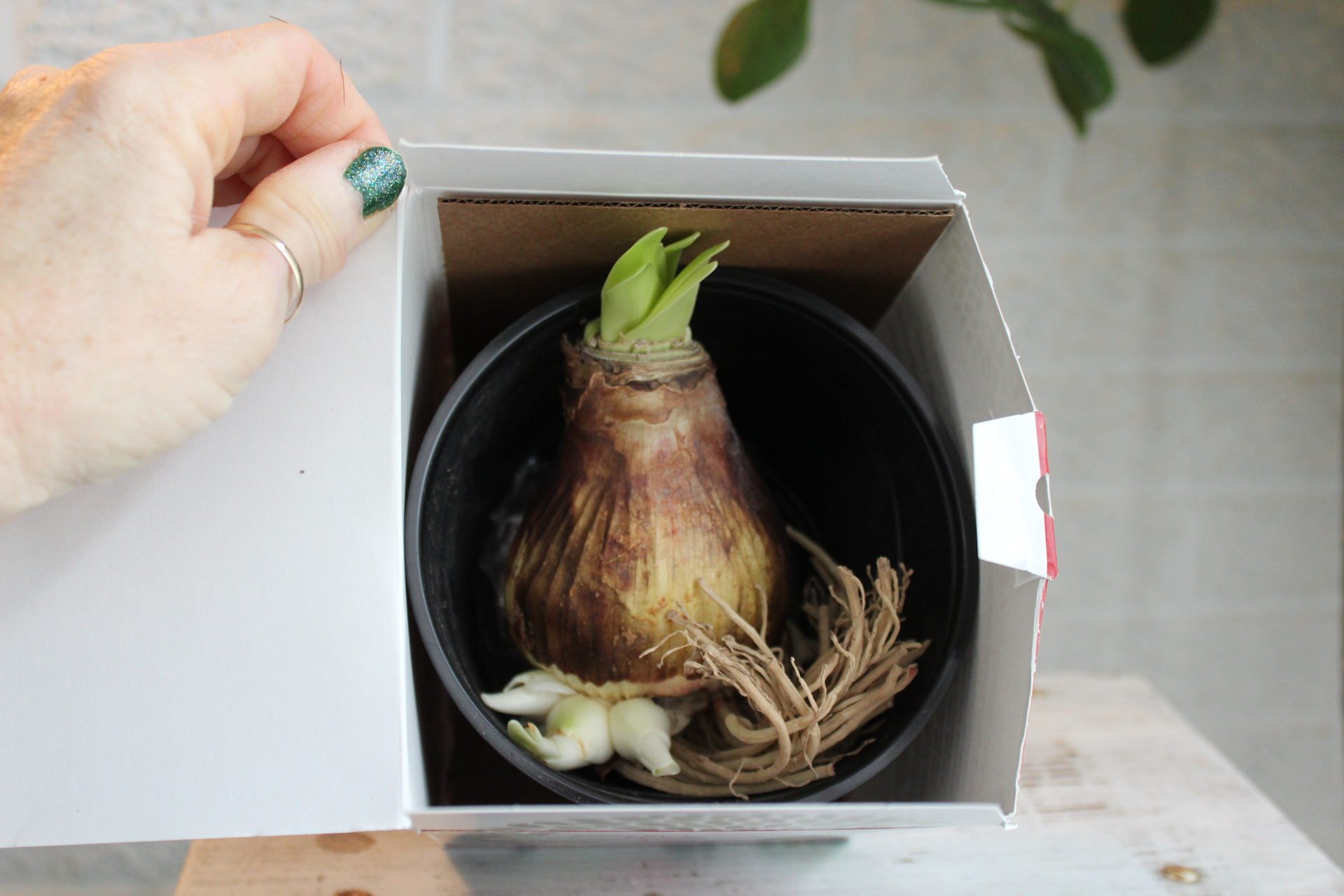 The bulb is growing in the box. 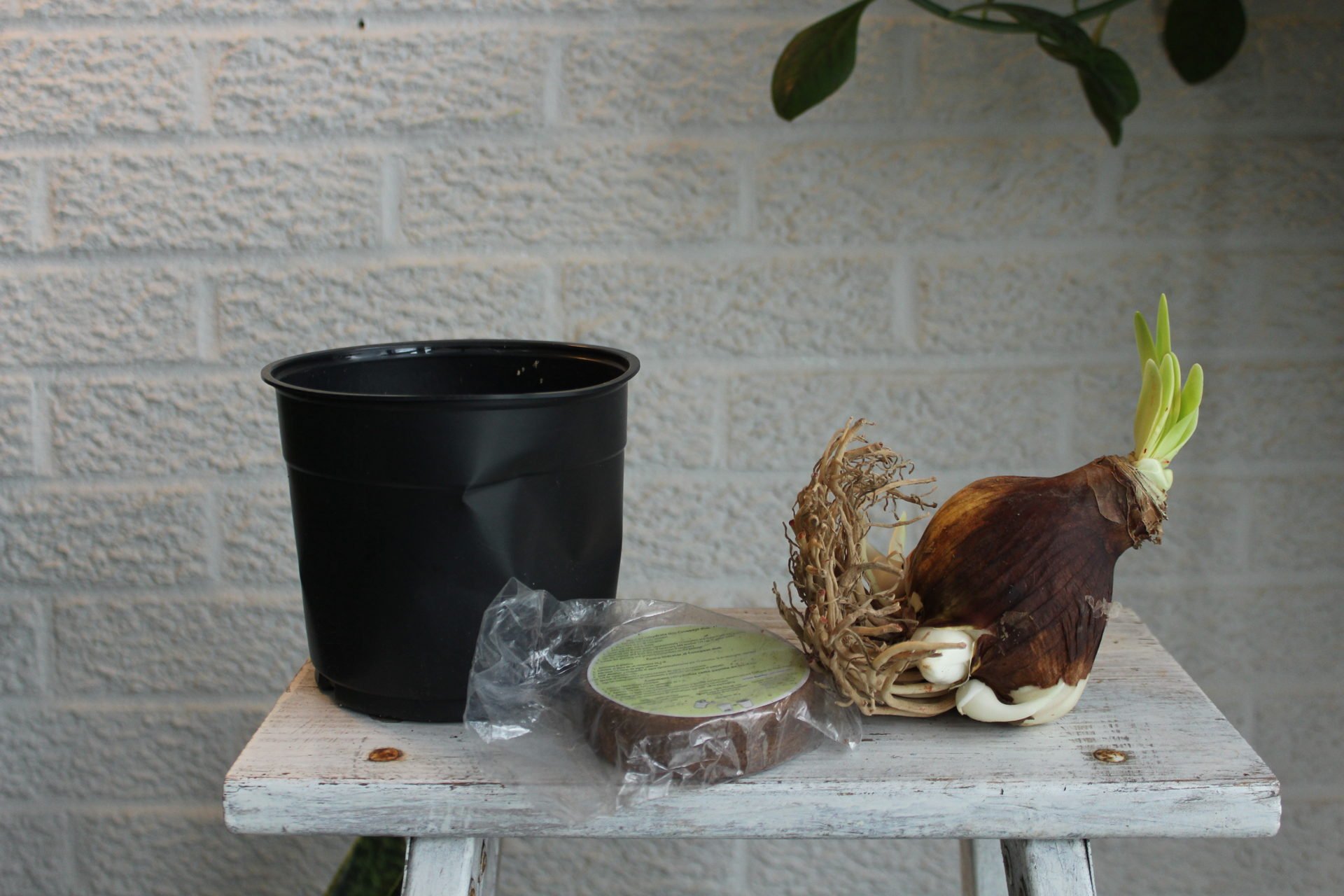 I took everything out of the box.

In the box there was a plastic pot a little wrinkled from the bulb growth, a pellet of what they call Cocopeat, and the bulb. The Cocopeat disk is 100% coir fiber which is fiber from the husks of coconuts. In the past, it would have been a peat moss disk, but coir is used more often now. 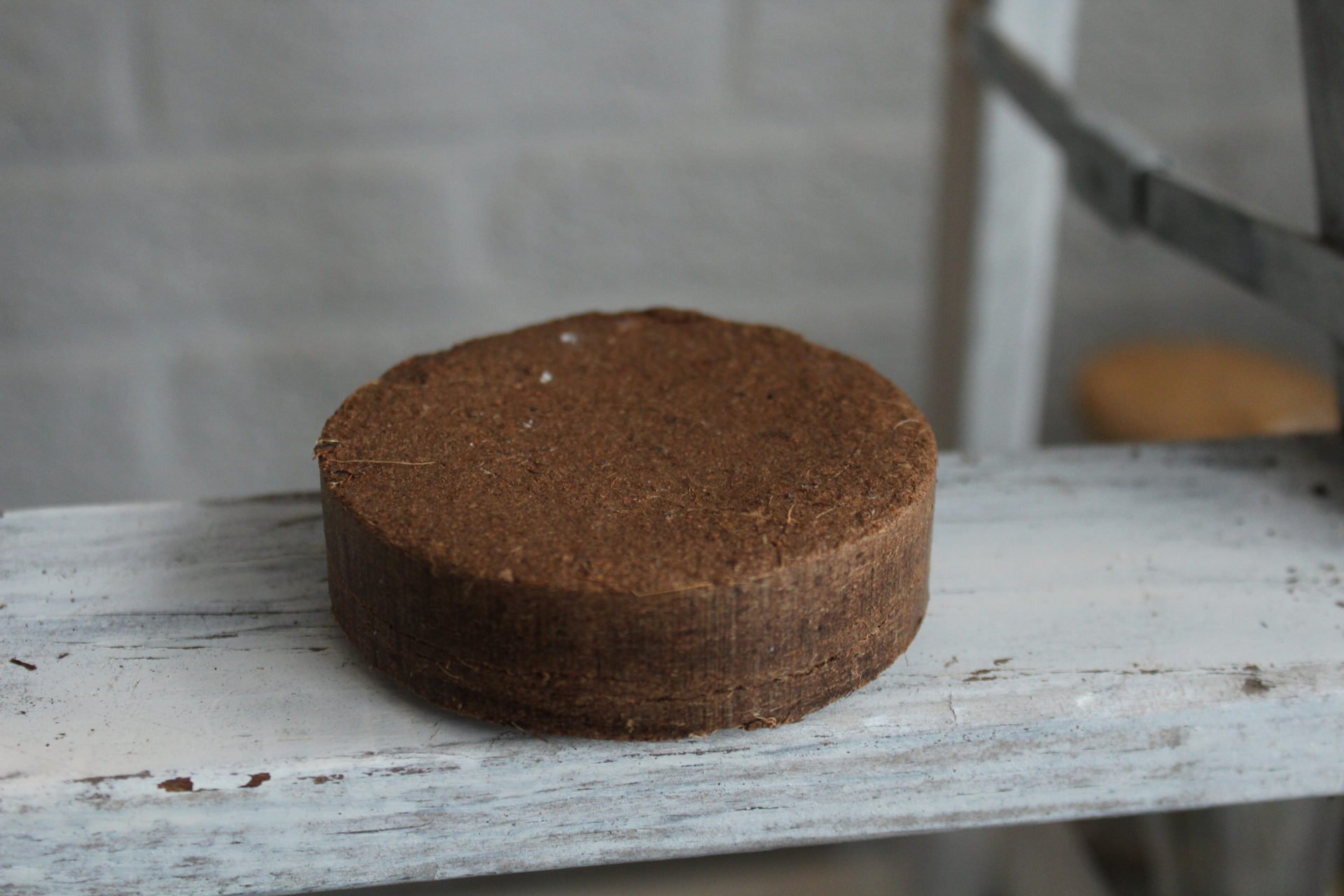 So, the directions say to soak the disk in 1 1/2 cups of water. It states it will take up to 15 minutes to absorb the water. Stir the mixture and drain excess water. Did I do that? No. I may use it in a mix later, but it was not used for the amaryllis bulb. Neither was the pot, but it would be fine if you didn’t have another one. Why didn’t I use them? It should be obvious why I didn’t use the pot…I like color, but the potting medium is a different story.  I have used the supplied potting medium before and the bulb never grew well. It didn’t root, the mix stayed wet too long, and sometimes the bulb rotted. I use my own custom mixed, well-drained, potting medium that I would use for most of my houseplants. I will say that the directions for planting the bulb on the back of the box were very easy to follow and correct. They even included a tip to turn the plant as the stem grows as it will lean toward the light. 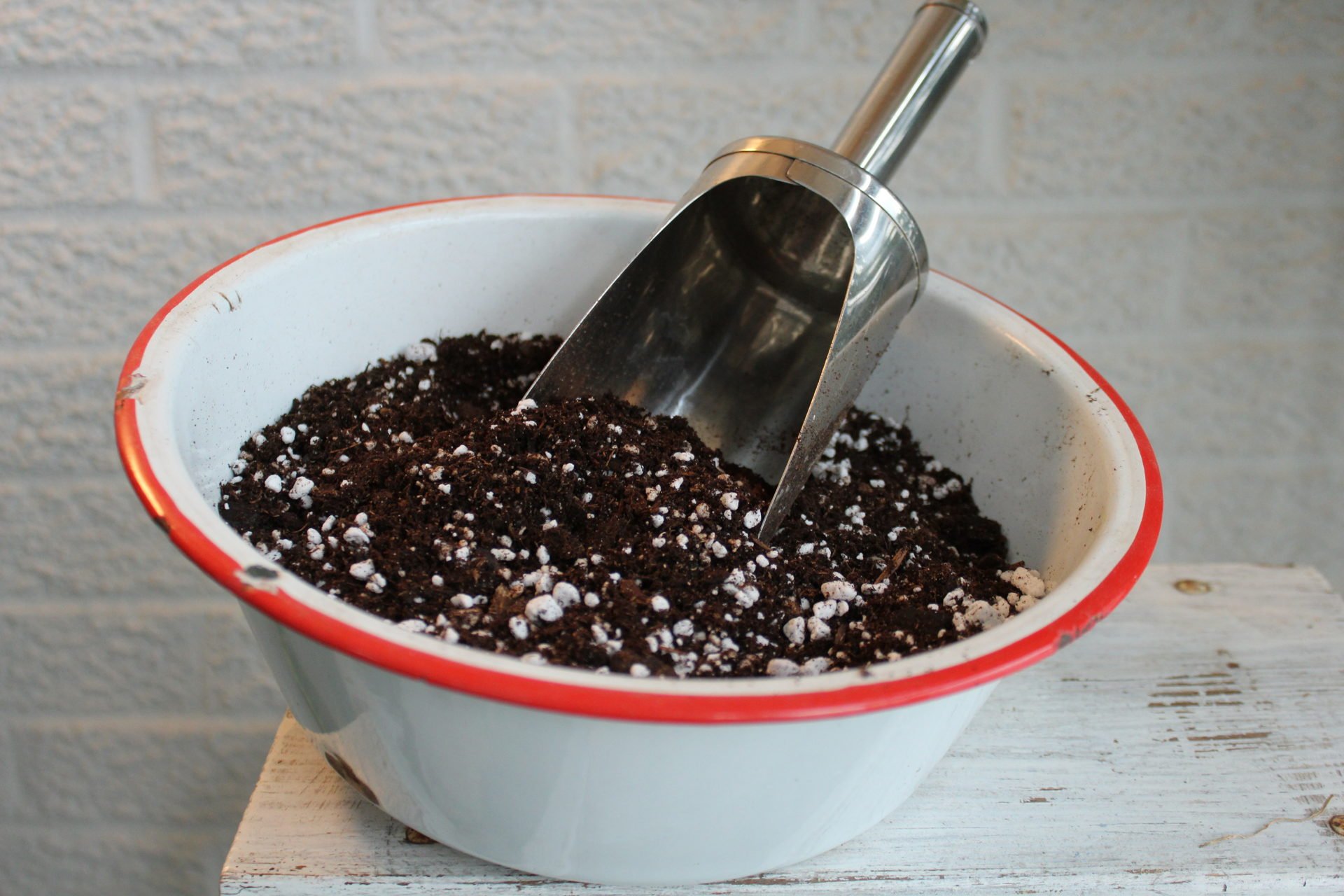 Before I plant my bulb, I soak the roots. They are usually so dried up, they are shriveled. I place the bulb on a vase of water that only allows the roots to be in the water, such as a tall drinking glass. I soak the roots for about 30 minutes. It really isn’t too important how long you soak them. Shorter, longer, whatever you do is fine. You wouldn’t have to soak them at all if you don’t have time. It is up to you. I find that it helps get the bulb going. 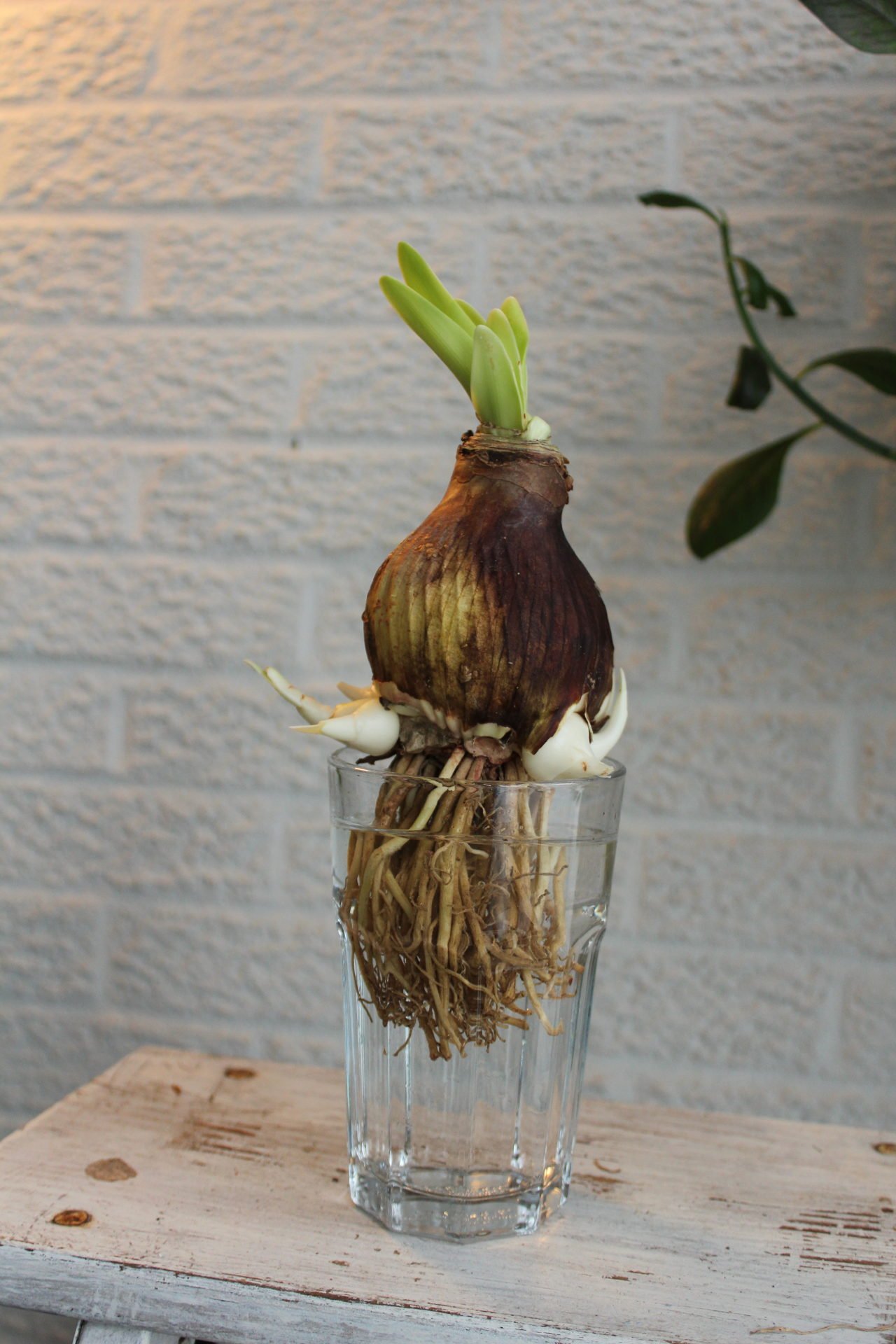 Soak the roots ONLY in water before planting

So now it is time to plant the bulb. If you don’t use the supplied pot, what do you use? I use a tall pot (to allow room for the long roots) that is only about an inch bigger around than the bulb. Because this bulb is already growing smaller bulblets, I had to choose a pot that would accommodate them. The bulb is snug in the pot and the bulblets will start growing up as soon as they hit the side of the pot. 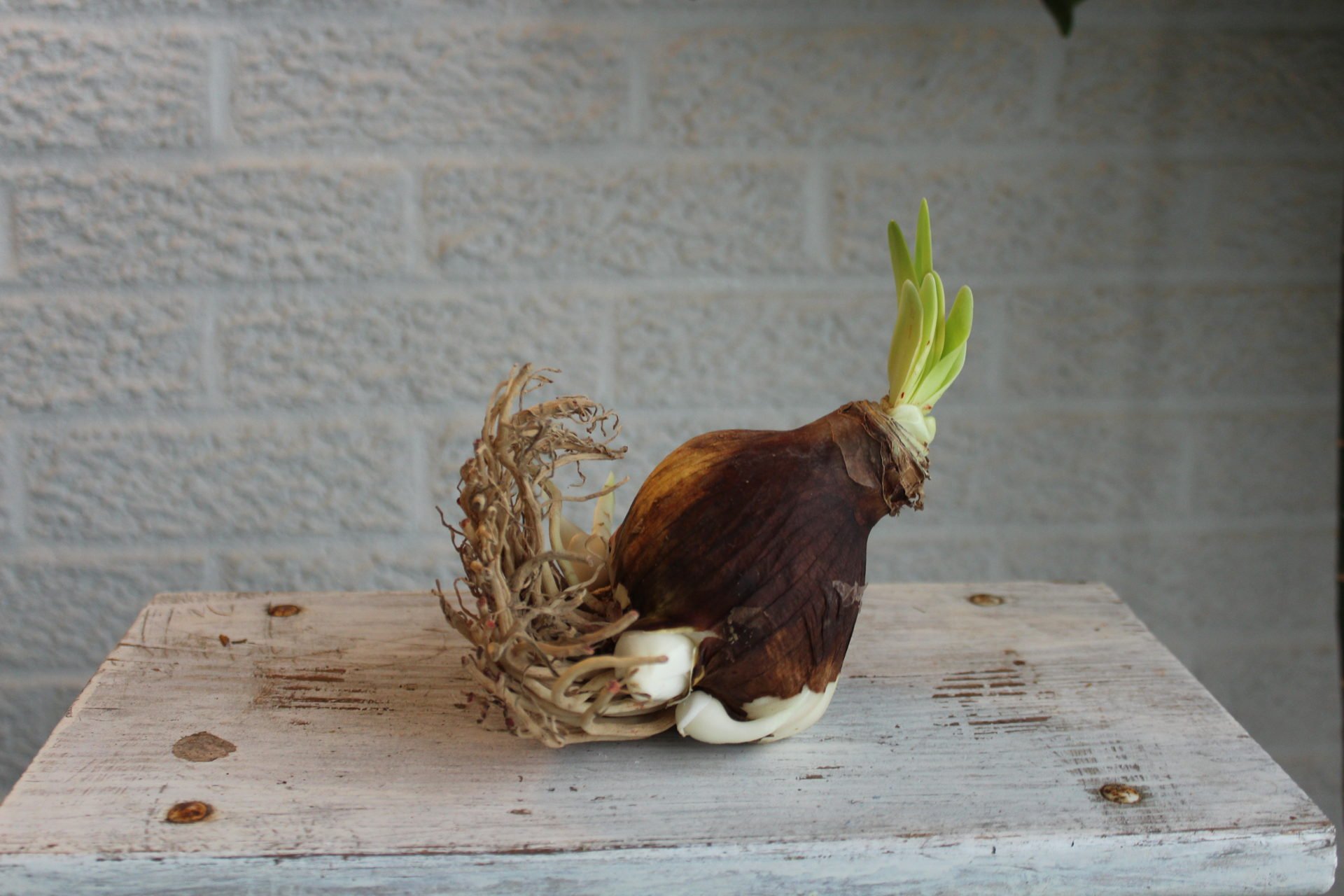 This bulb has a lot of healthy roots 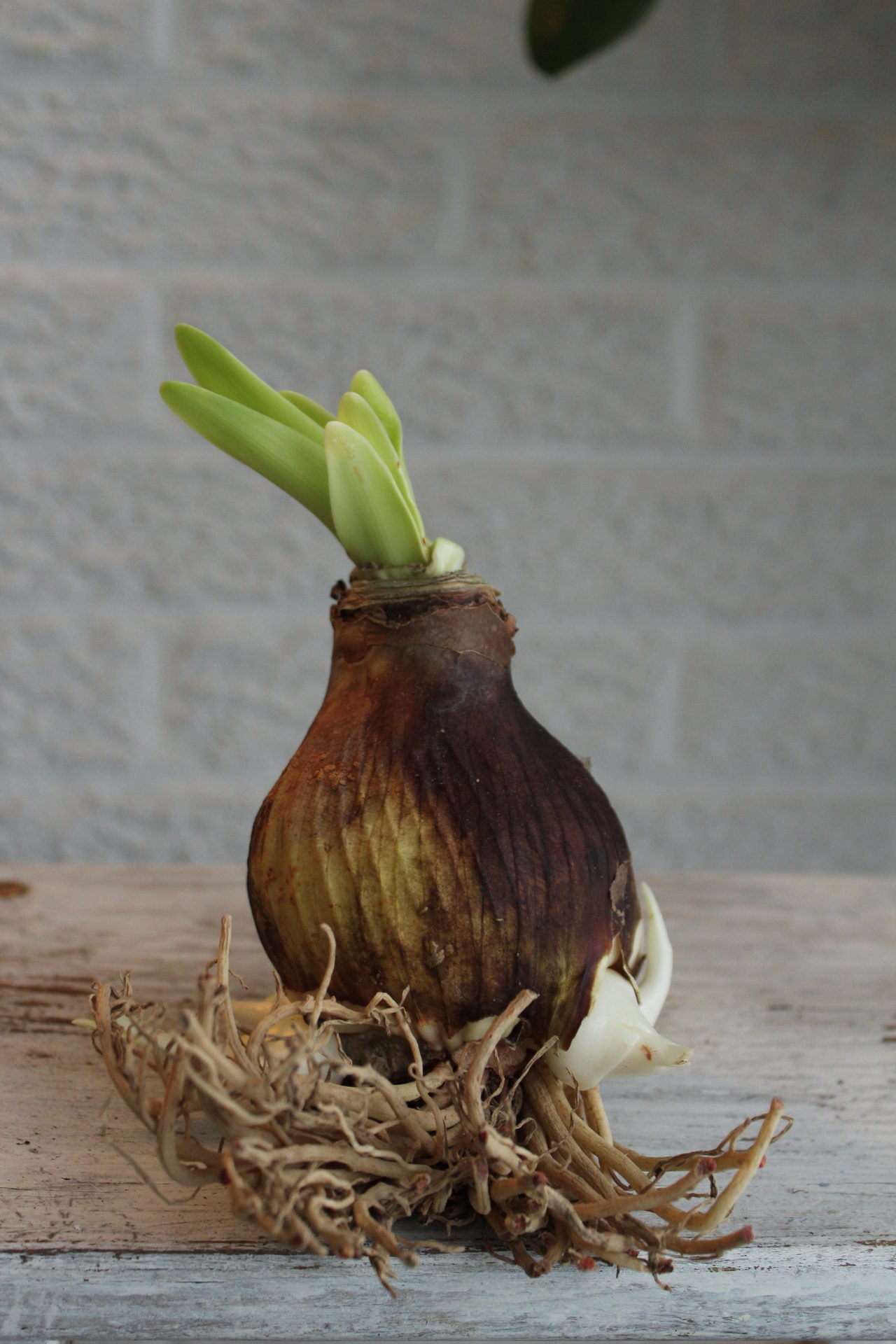 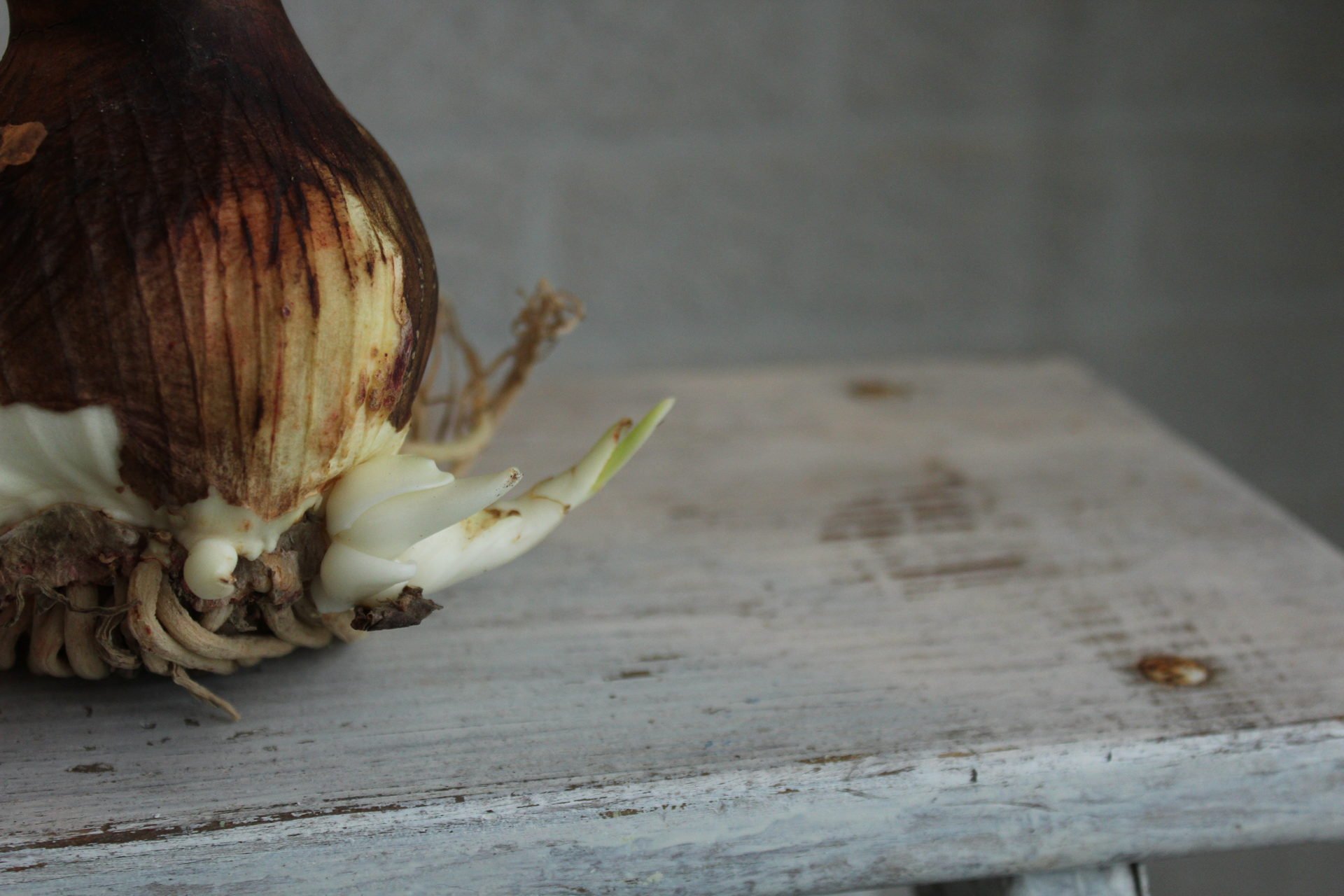 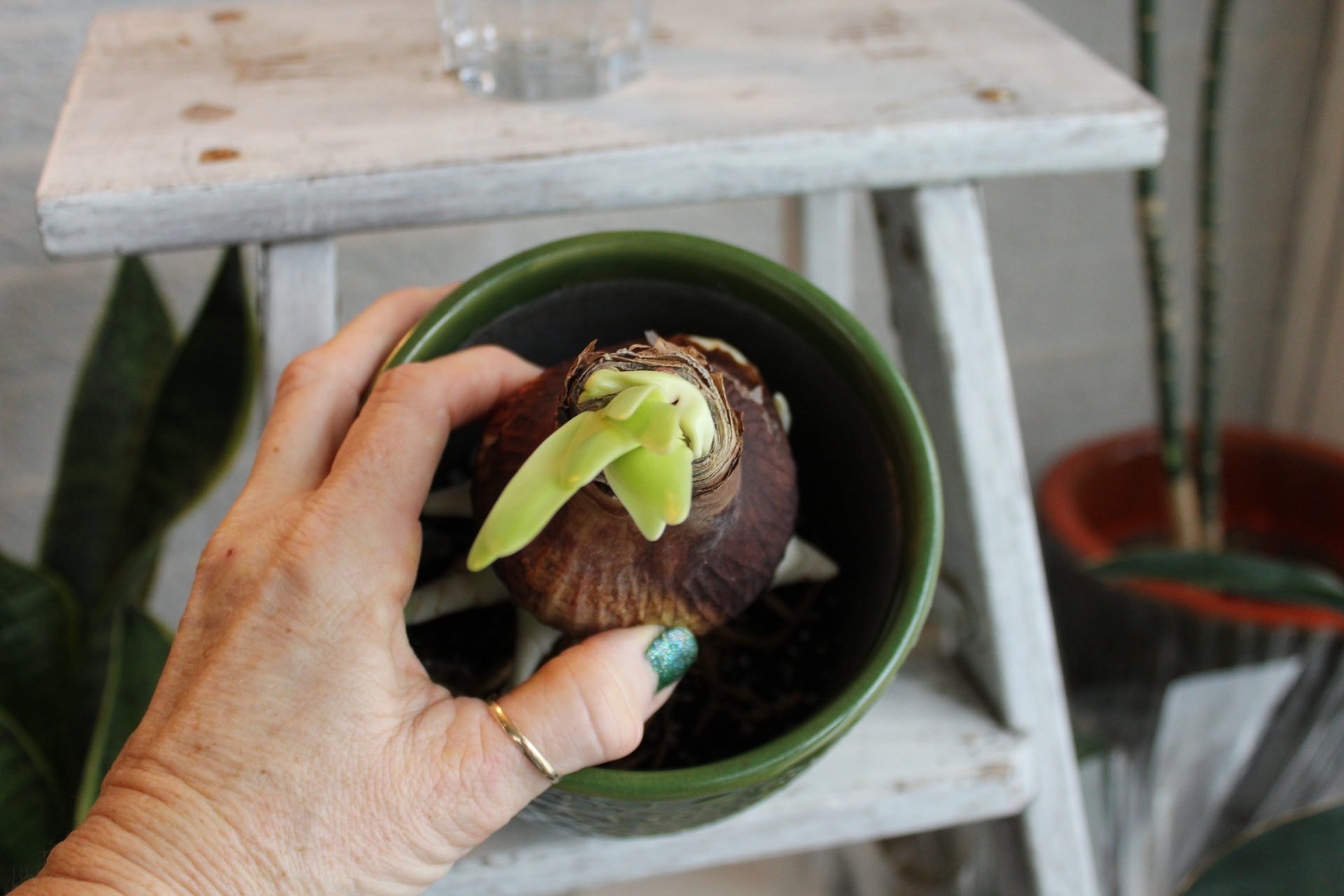 When you plant the bulb, leave about 1/3 of the bulb above the potting medium line. They do not like to be planted deep like hardy bulbs outside, which are planted 3-8″ below the soil line, depending on the type of bulb. This is a non-hardy bulb for the northern part of the country. 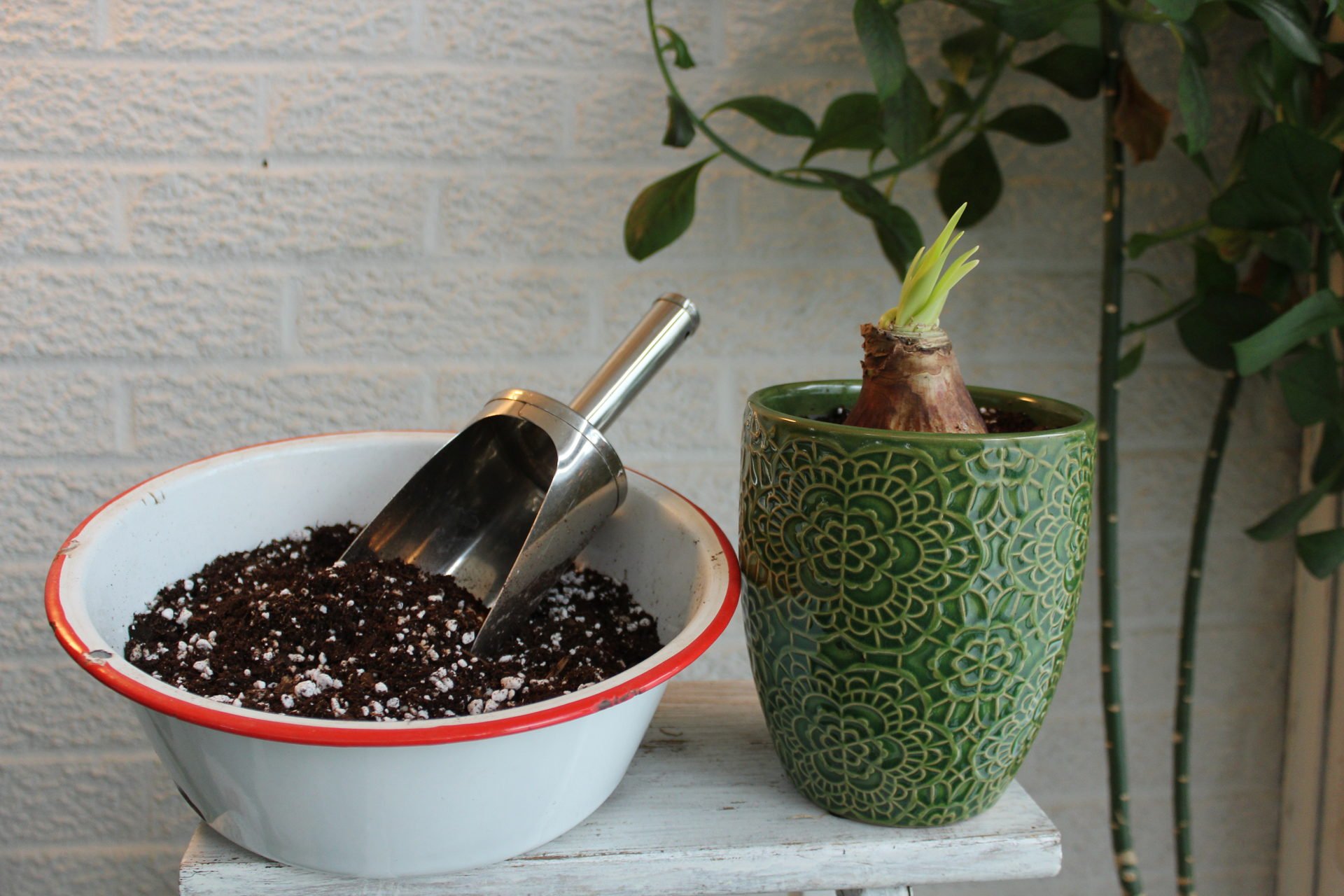 I planted the amaryllis in a well-drained potting medium 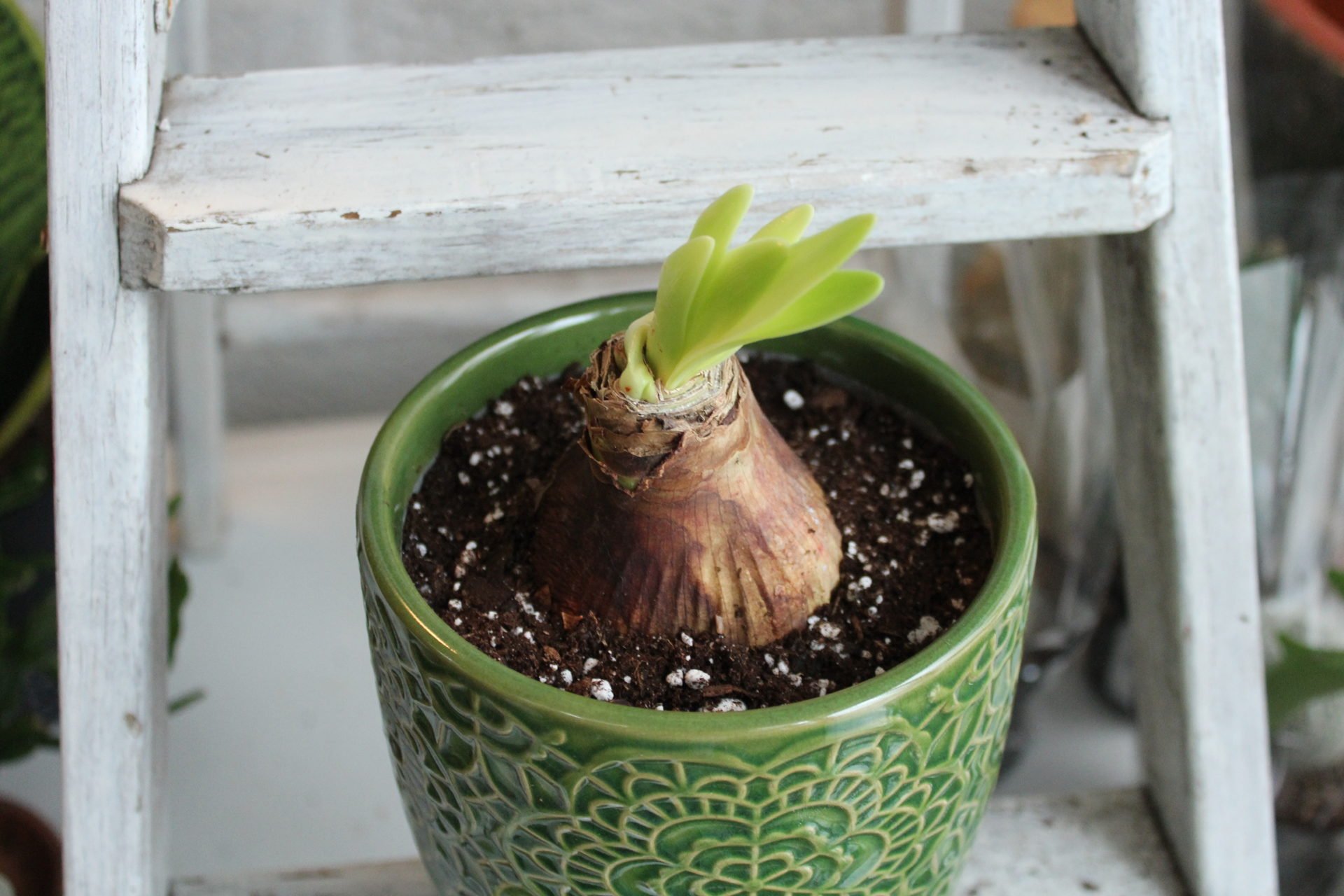 After planting the amaryllis, water it in well and then wait to see signs of growth before watering again. My bulb already has growth, so I can water it again when it is dry. Keep it evenly moist while it is growing, turning it often as it will lean towards the light. Usually, the flower stalk grows first, so I may not get any flowers this year as I only see leaves. That’s not to say a flower stalk may not appear later. Those leaves though will be feeding the bulb throughout the year and it will be storing up energy for next year’s flowers. I can wait if I need to. Read here how to take care of your amaryllis after it blooms.

Did you get an amaryllis for the holidays? Is it growing well? Or is it already flowering? Have you had luck with the boxed bulbs? Let me know in the comments.