Mealybug Insects and How to Control Them on Your Houseplants 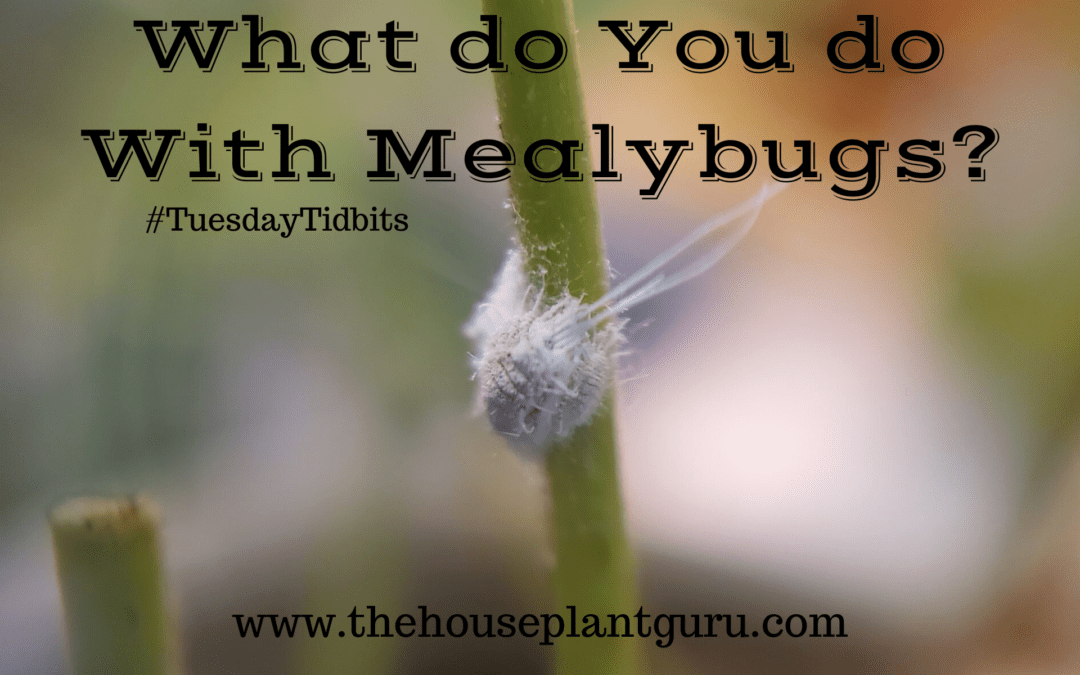 What do you do with mealybugs? That is a great question. I wish they would fall off the face of the earth. They are so annoying! These pictures are of mealybugs that infested my cardboard plant, Zamia furfuracea. 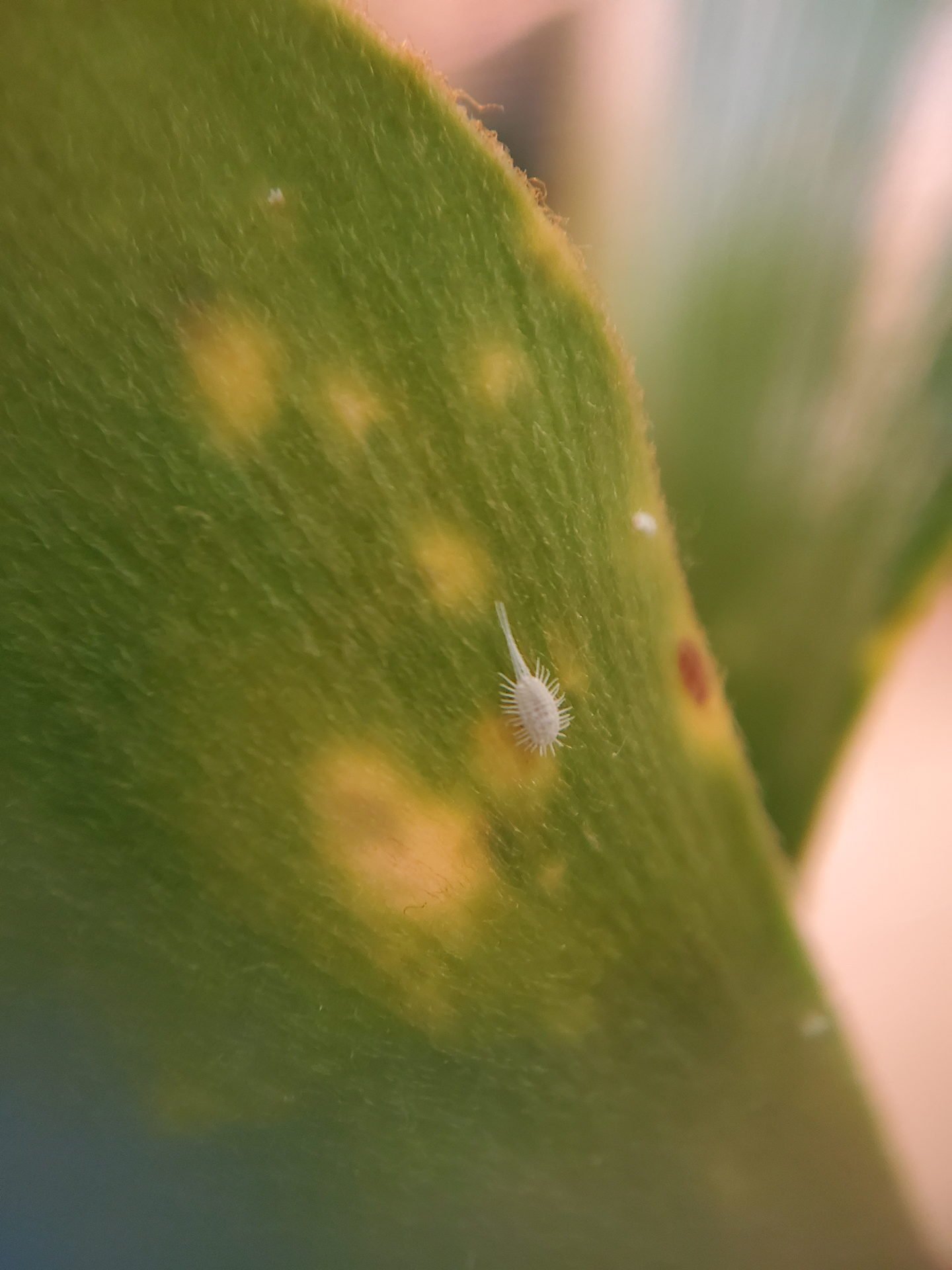 Mealybug on a leaf with the damage from it showing. 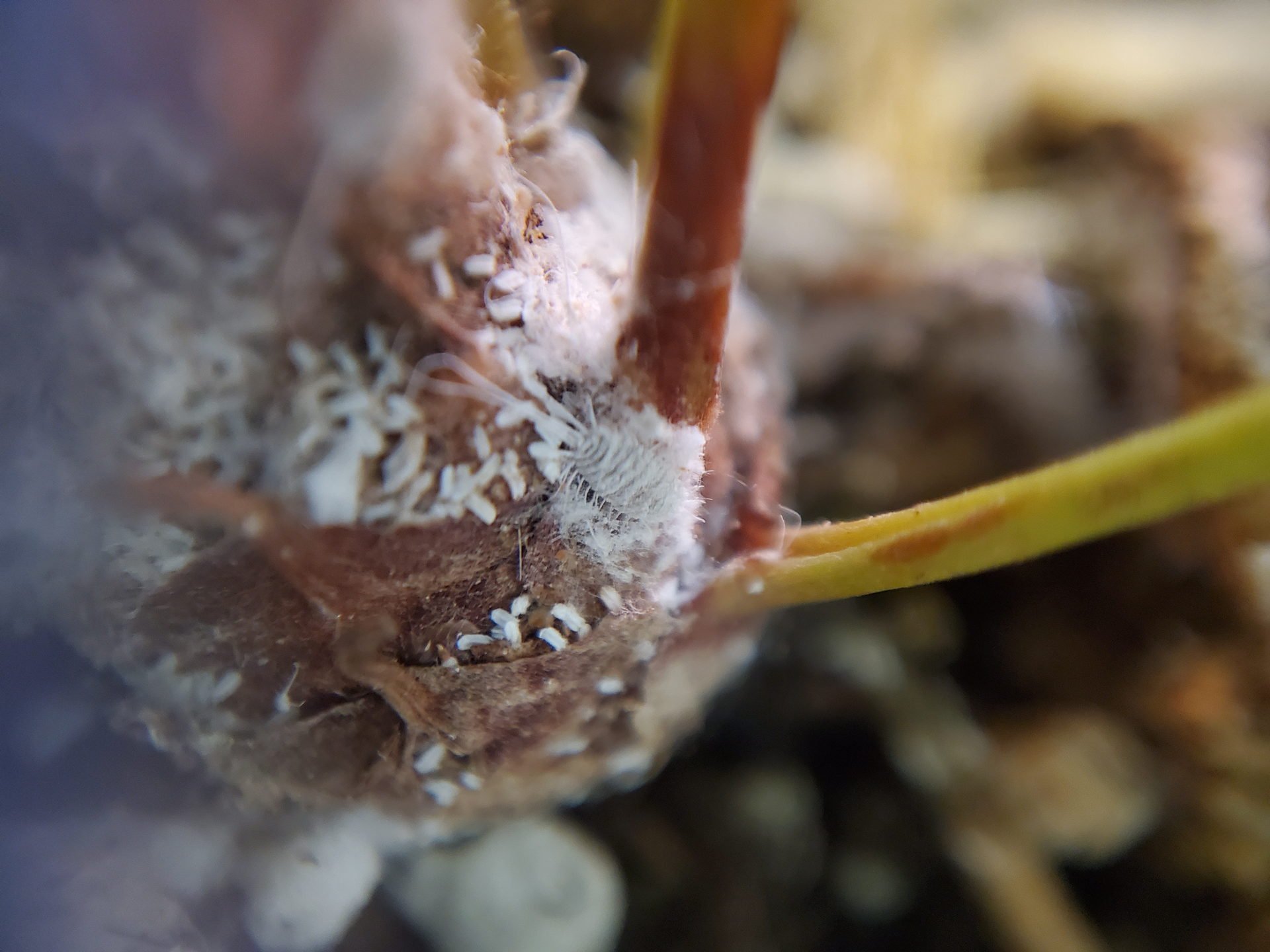 Here is a mealybug and armored scale 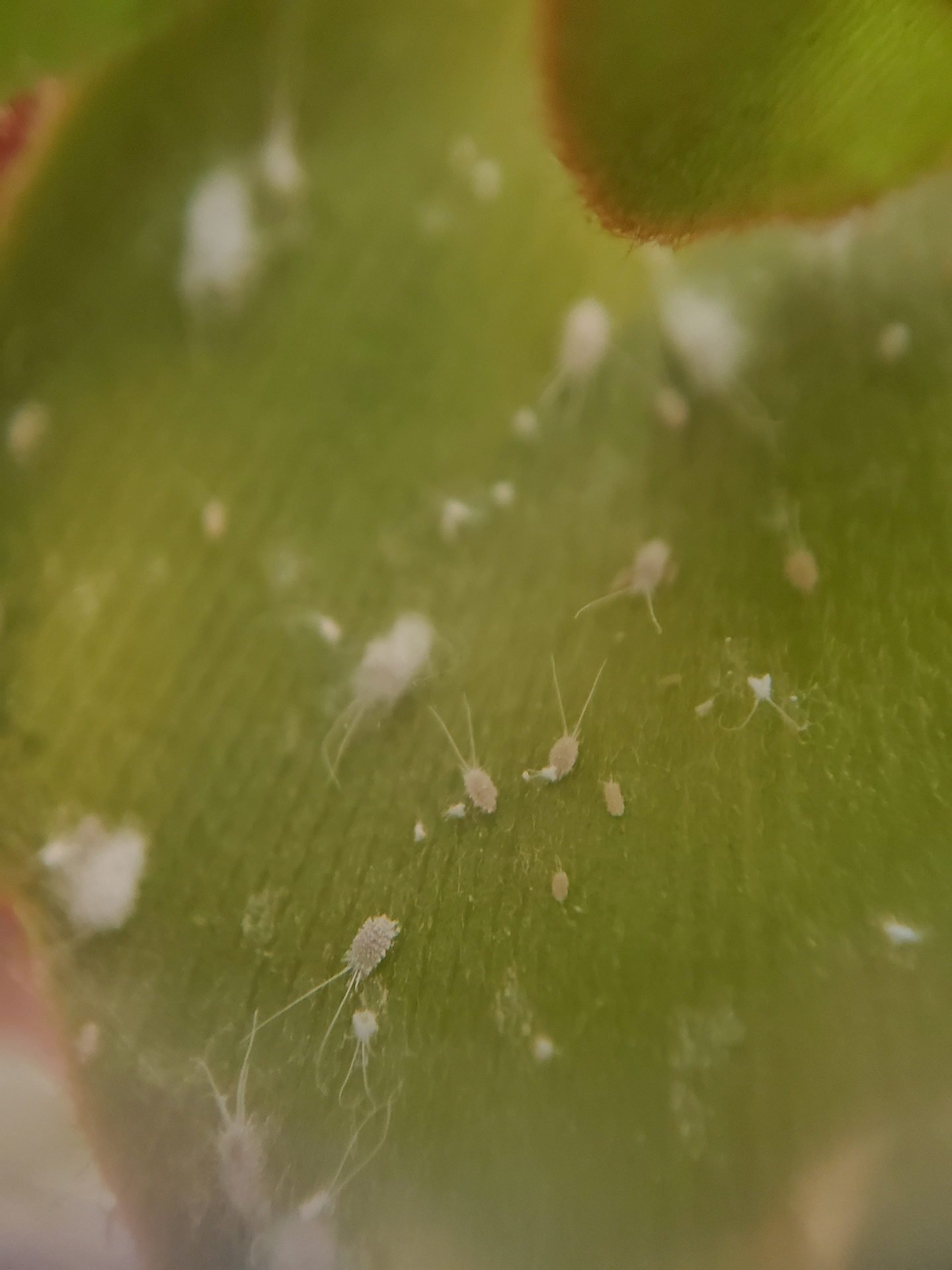 Many mealybugs in different stages on this leaf.

As you can see below on this aglaonema, two mealybugs are visible. That certainly does not mean there aren’t more hiding under the leaf, in the axils of the leaves, or there are eggs getting ready to hatch.  Check your plants often so you can catch the problem early. A couple of mealybugs would be simple to get rid of compared to hundreds. 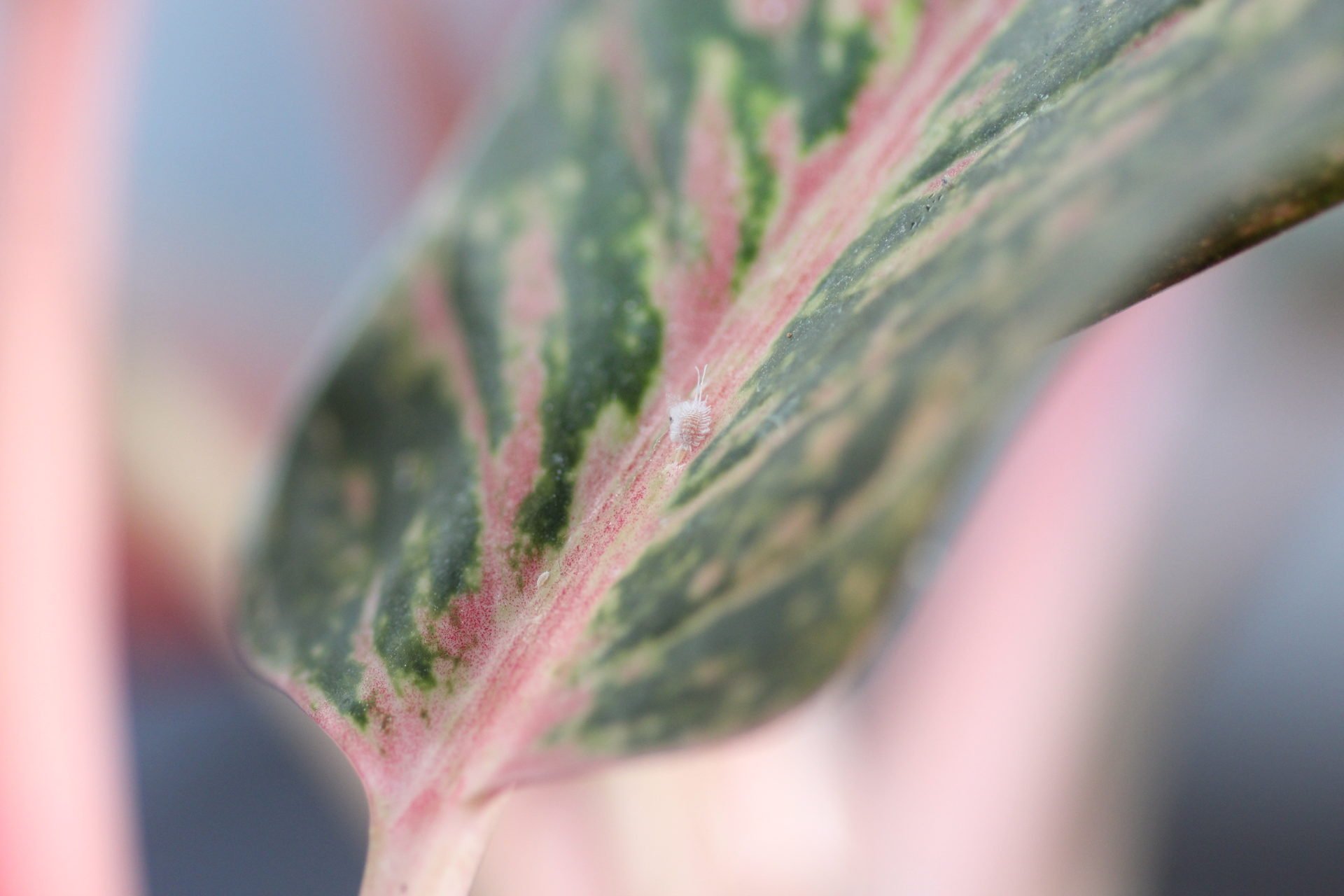 Just one adult and one baby mealybug on this aglaonema leaf 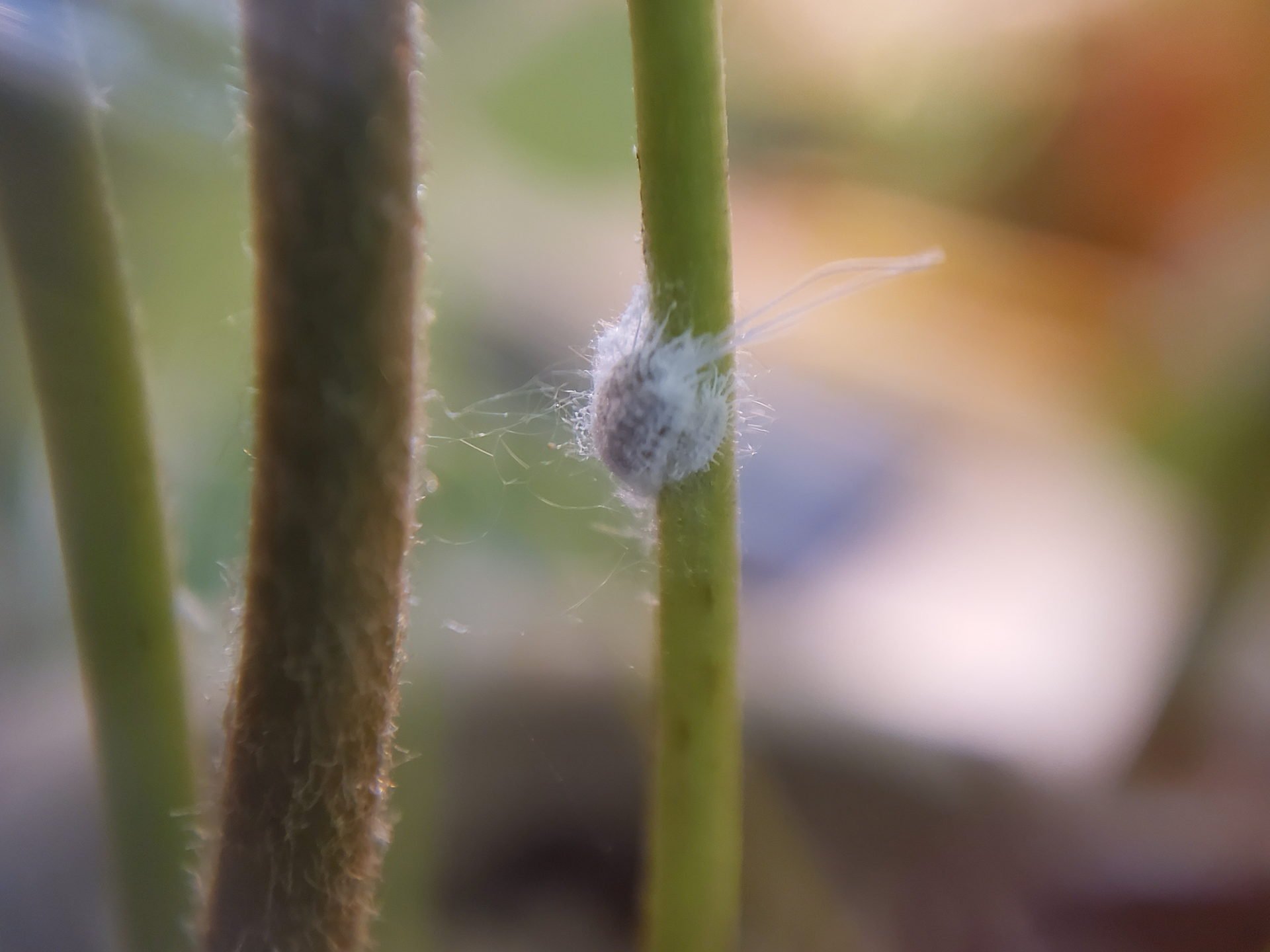 Mealybug on the stem of a cardboard plant stem

Getting rid of them

Those are some great pictures of mealybugs in all their terrible glory. I obviously have a problem. What am I going to do? Well, this is what I did. First I grabbed the rubbing alcohol and some cotton swabs. I touched each one with a swab doused in rubbing alcohol. It dries the insect out. I touch them, but also try to wipe them off with the swab. 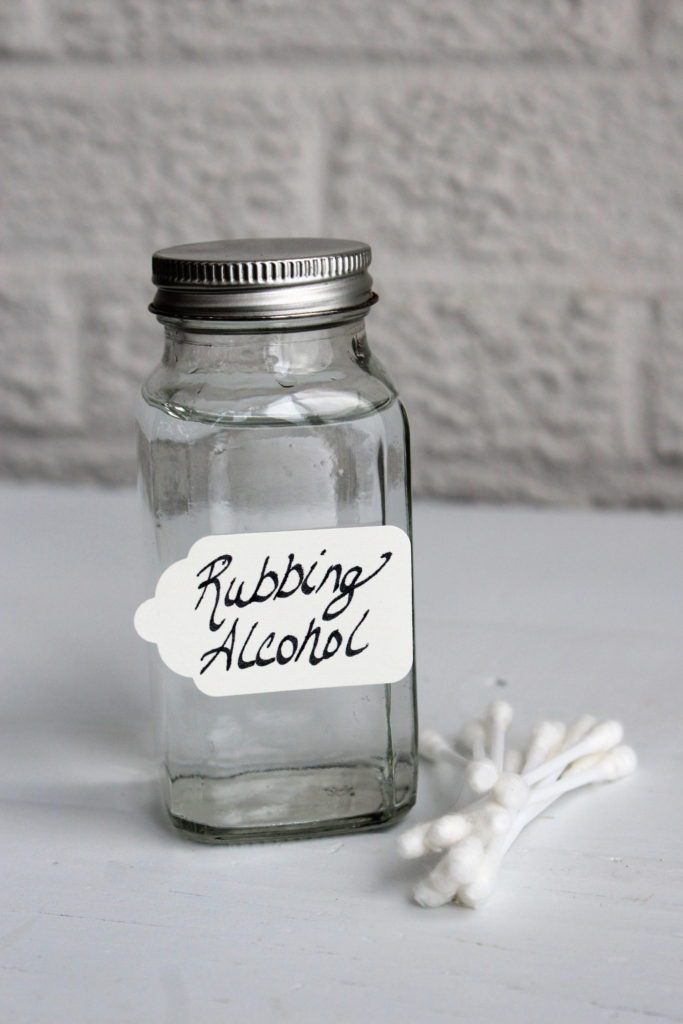 Use rubbing alcohol and cotton swabs to touch each bug 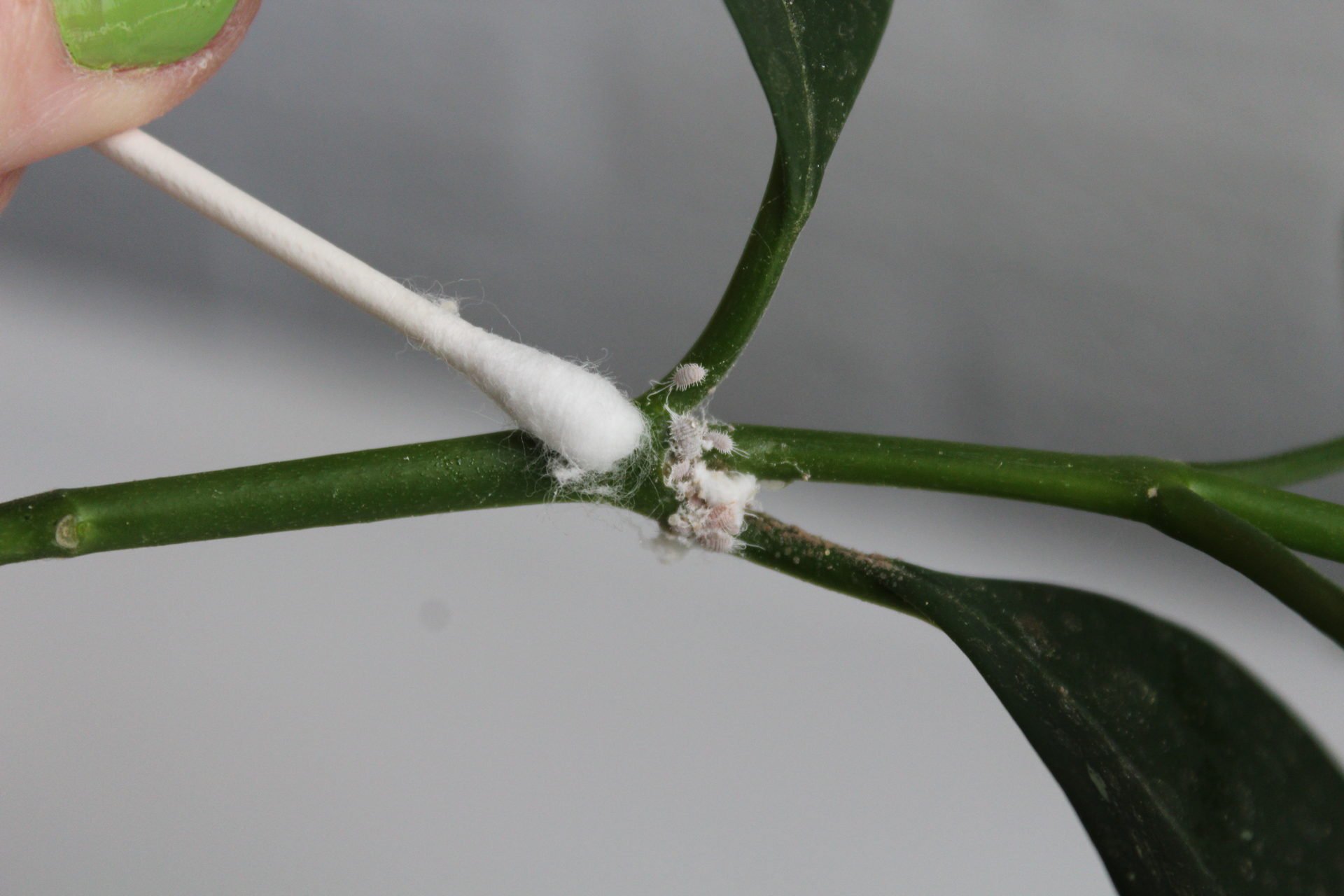 Touch each mealybug with a cotton swab soaked in alcohol 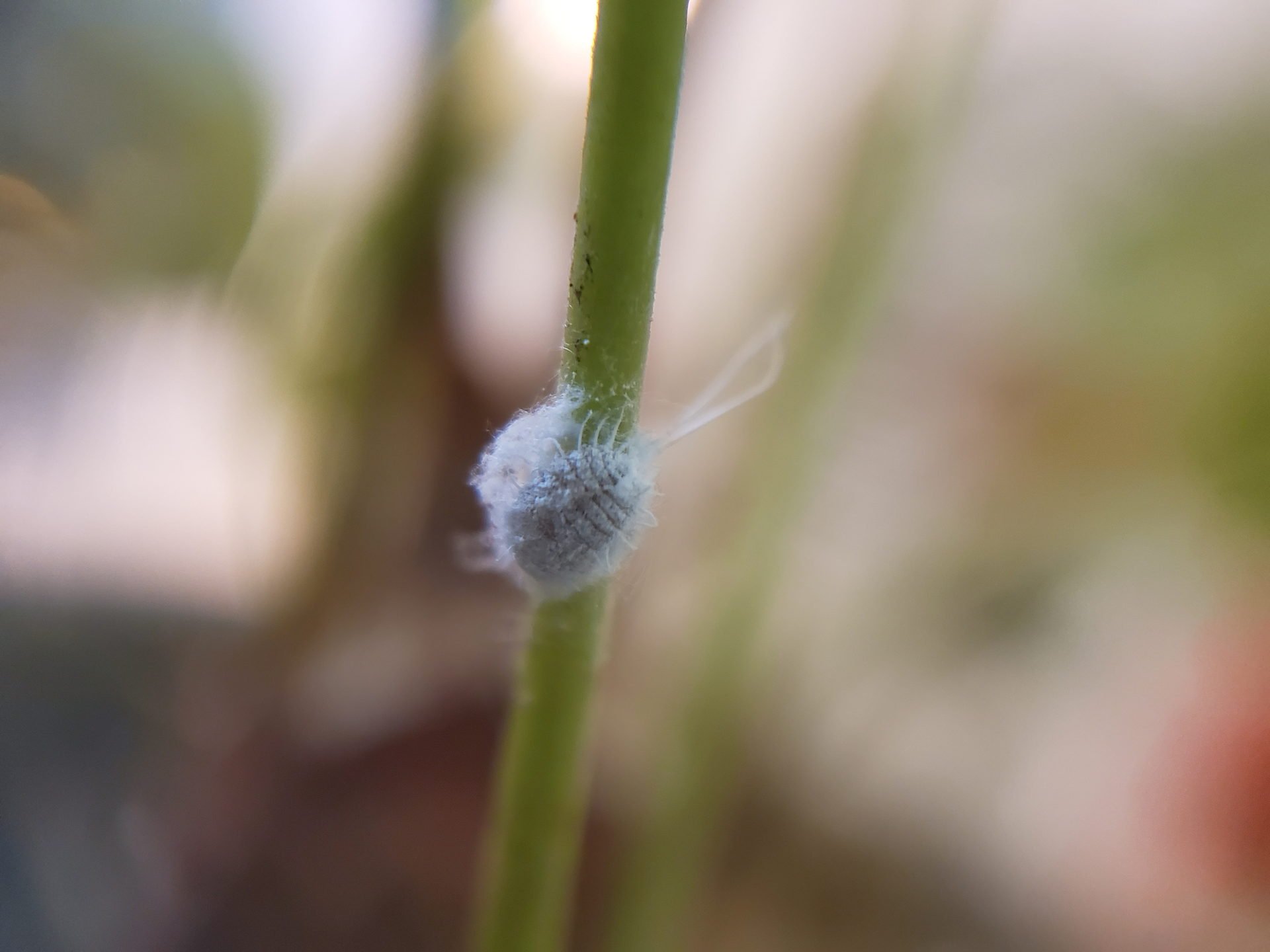 The next line of defense I used was a systemic insecticide. I used Bonide Systemic Houseplant Insect Control. 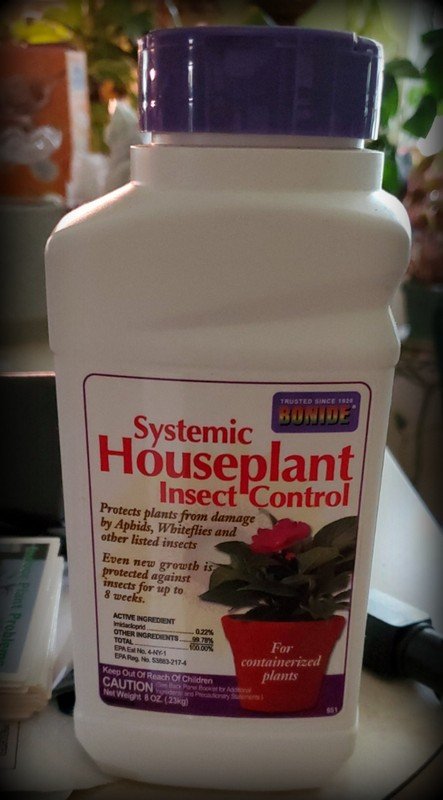 This is a granular product that is sprinkled onto the potting medium, scratched in a bit, and then watered in. It is then drawn up into the plant and makes the plant poisonous to the insect. It also makes it poisonous to everything else that may chew on the leaves. I would be very careful using this if you have small kids around or in my case, Henry the crazy jungle kitty who loves my plants. This is a chemical control. I could have used Neem oil as well, but I am not going to lie to you-the plant is now in the trash. It was too far gone and I wasn’t as consistent as I should have been with the q-tips and alcohol. Remember, there are eggs hatching even after you think you have wiped off all the bugs. So it needs to be repeated as needed.

I recently listened to a webinar about mealybugs and was surprised to hear that systemic insecticides aren’t all that effective on mealy bugs. So bummed. So now I think I’m going to wipe with alcohol, use insecticidal soap and try an all-seasons oil, too. What do you use for mealybugs that has worked?

Neem is a product derived from the neem tree and when sprayed on the infested plant,  it suffocates the insects. It is also a natural product and I have sprayed it on my plants in the house in a closed-off room. with no ill effects.  It is an insecticide, miticide, and fungicide so a multipurpose product. This zamia also had armored scale as you can see in one of the pictures, so it was doomed. I didn’t want it to get on any other plants, so I gave up. (Remember: READ THE LABEL of anything you use on your plants. Take precautions such as using gloves and wearing a mask if possible. SAFETY first.)

Consistency for the win

Yes, I gave up on this plant, but if you are consistent with your control and pay attention to see if new babies hatch and deal with them right away, you can be successful getting rid of mealybugs. I have been successful many times, just not with this particular plant.

Have you had luck getting rid of mealybugs? Or do you see one and throw your plant out immediately? Do you use chemicals or just try natural products, such as neem oil? Let me know your way of dealing with mealybugs in the comments.

Have a good week!