What is The Function of Aerial Roots? 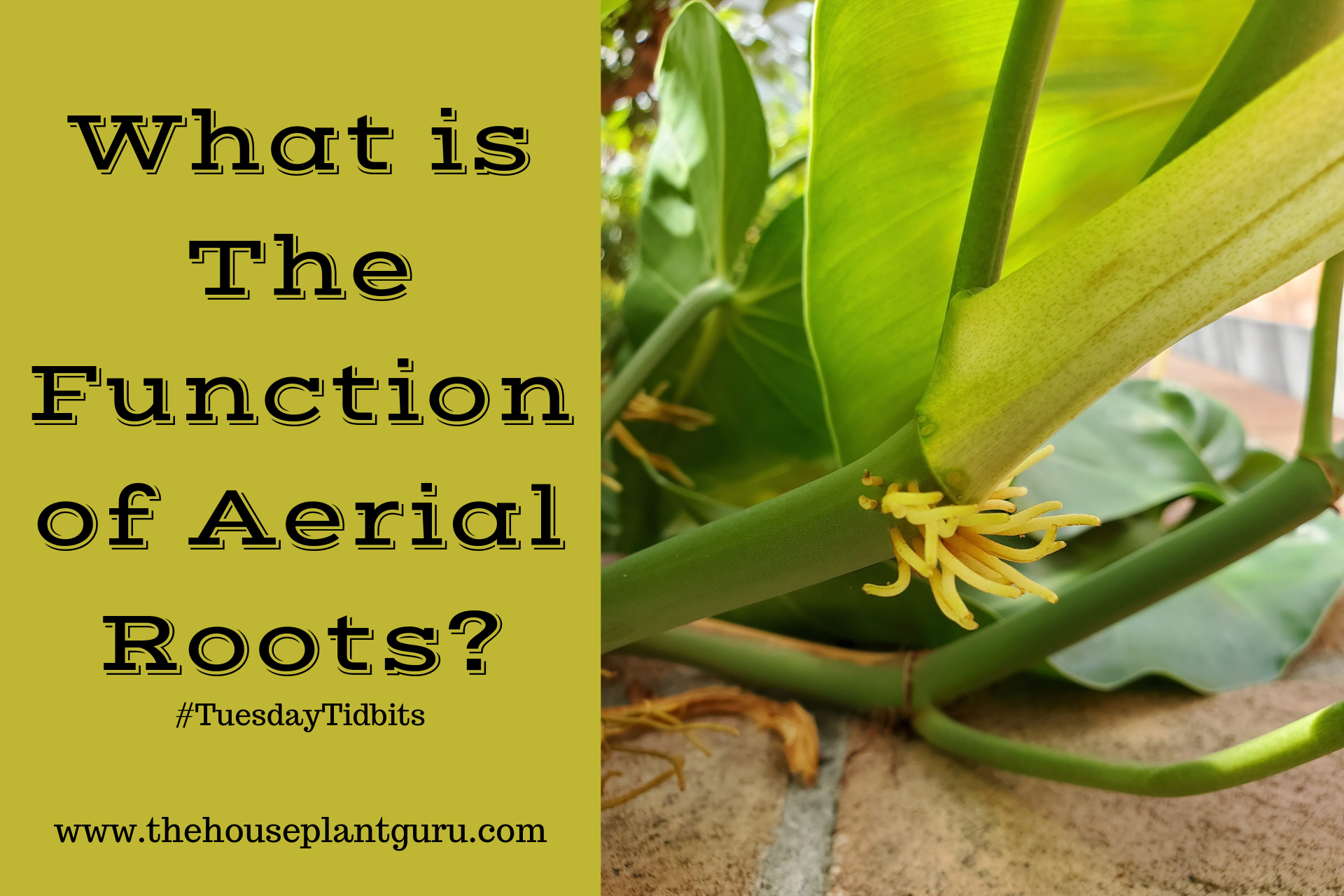 Aerial roots. What are they? Aerial roots are roots above ground. In the case of my philodendron, my pothos, and my raphidophora, they have attached my plant’s stems to the wall as they climb…..oops. Is that a problem? Not for me. 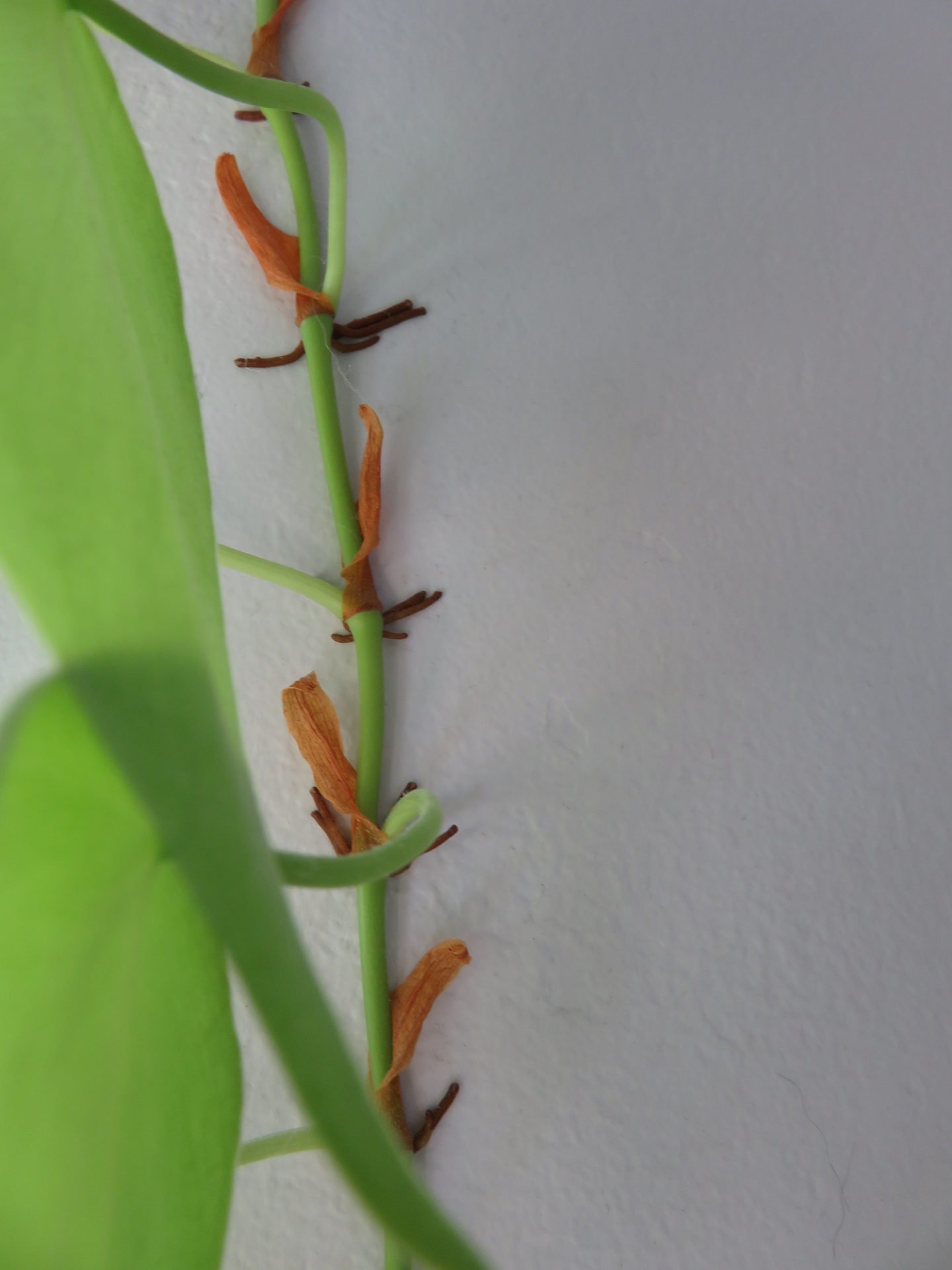 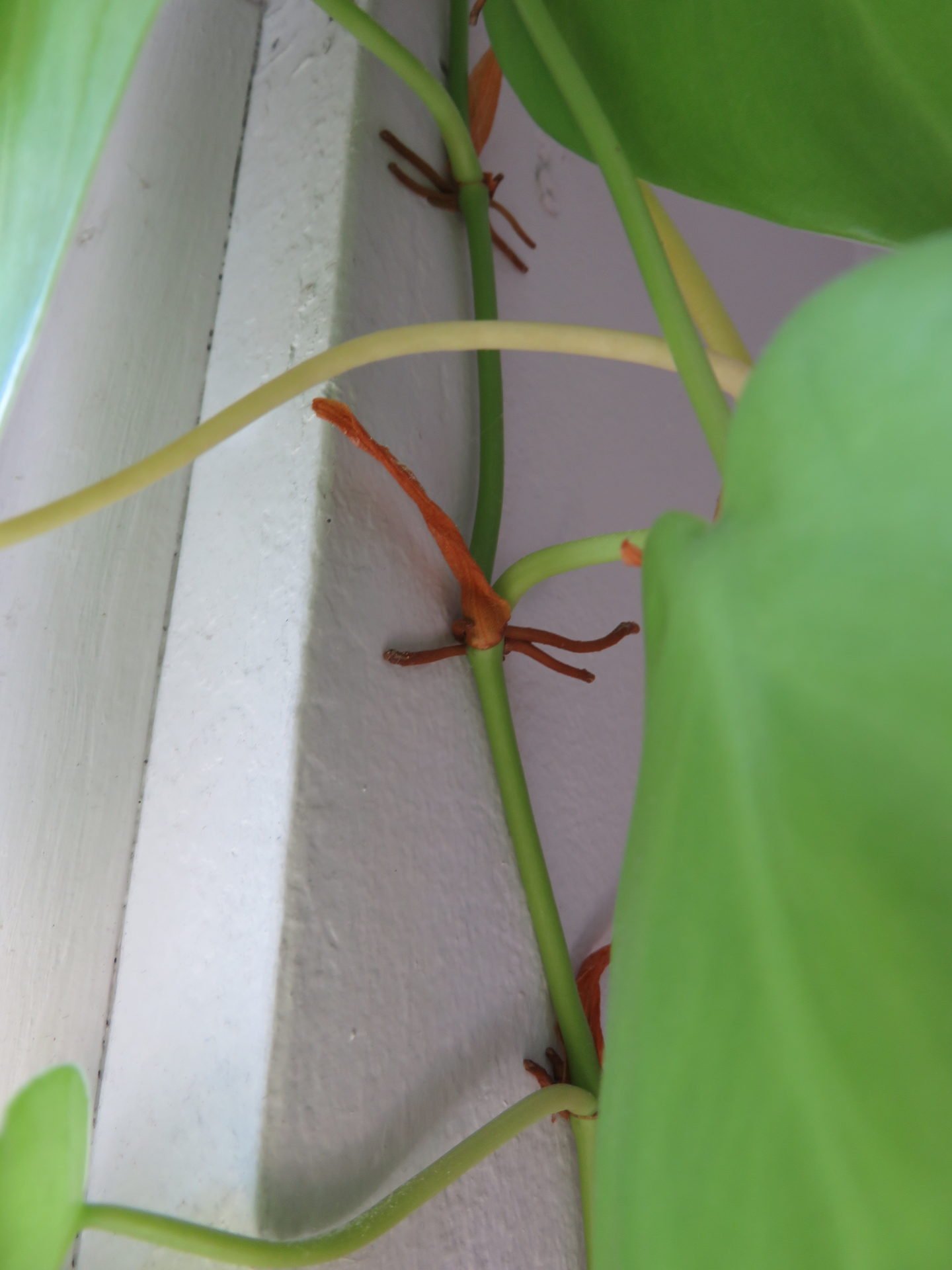 As you can see below, these vanda orchids are not growing in soil, or bark. Their roots simply hang in the air collecting moisture to keep the plant alive. 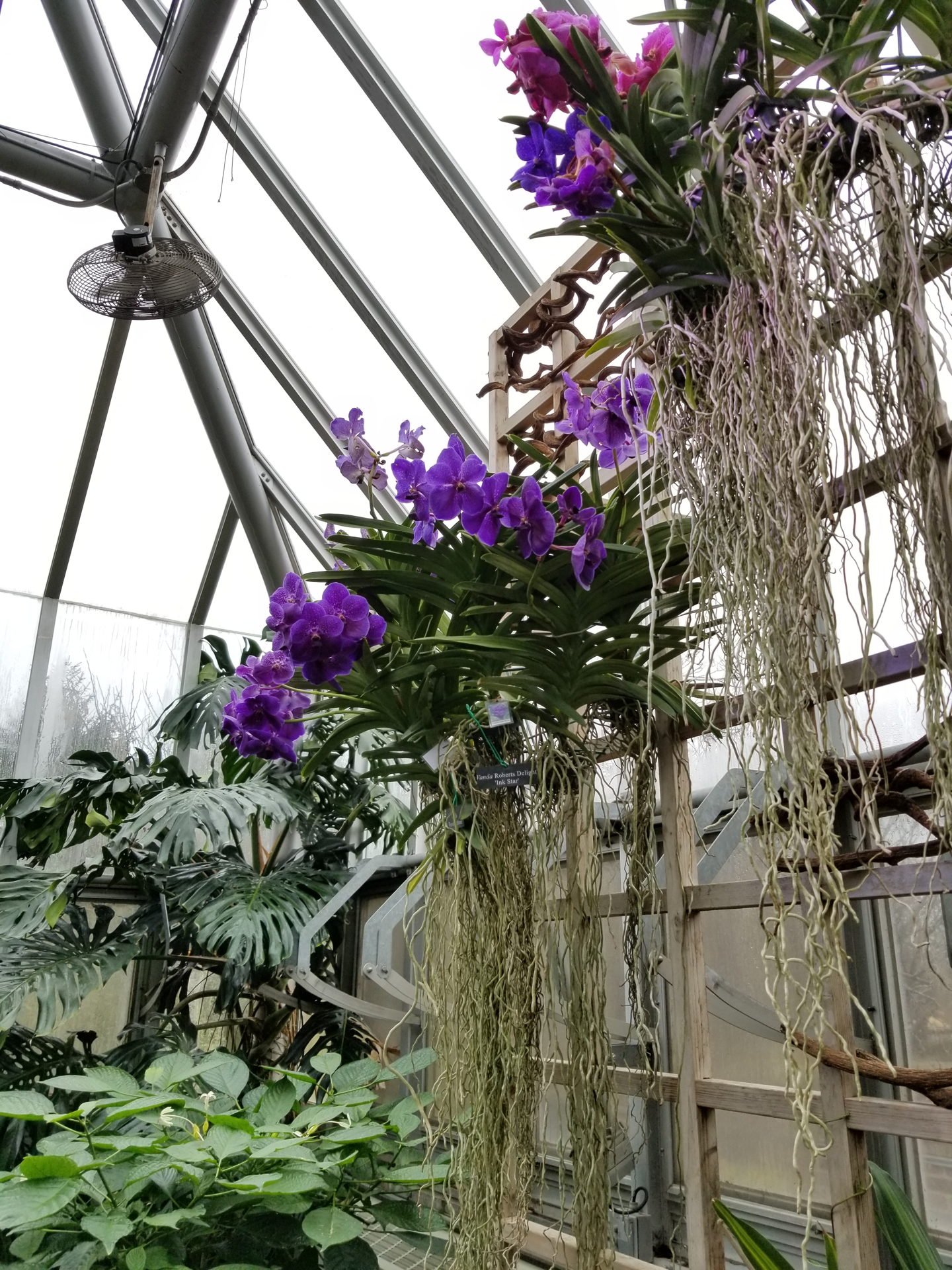 Aerial roots on a vanda orchid

Aerial roots on my raphidophora have attached themselves to the wall in my dining room and climbed to the top of the window. As you can see in the picture on the right, when an aerial root is pulled off the wall, part of it stays. So usually I just let them stay on the wall and keep climbing. 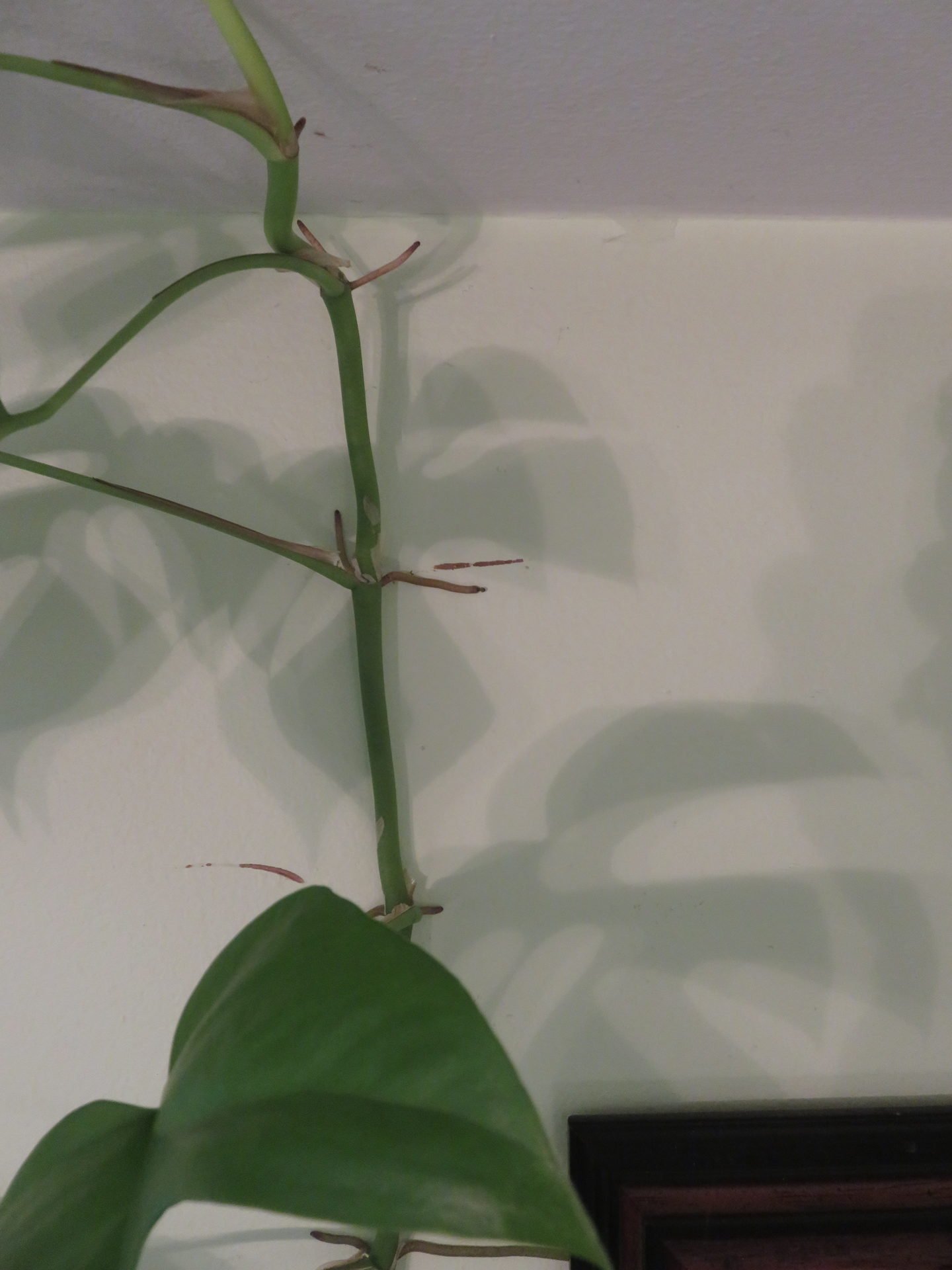 Raphidophora climbing the wall in my dining room 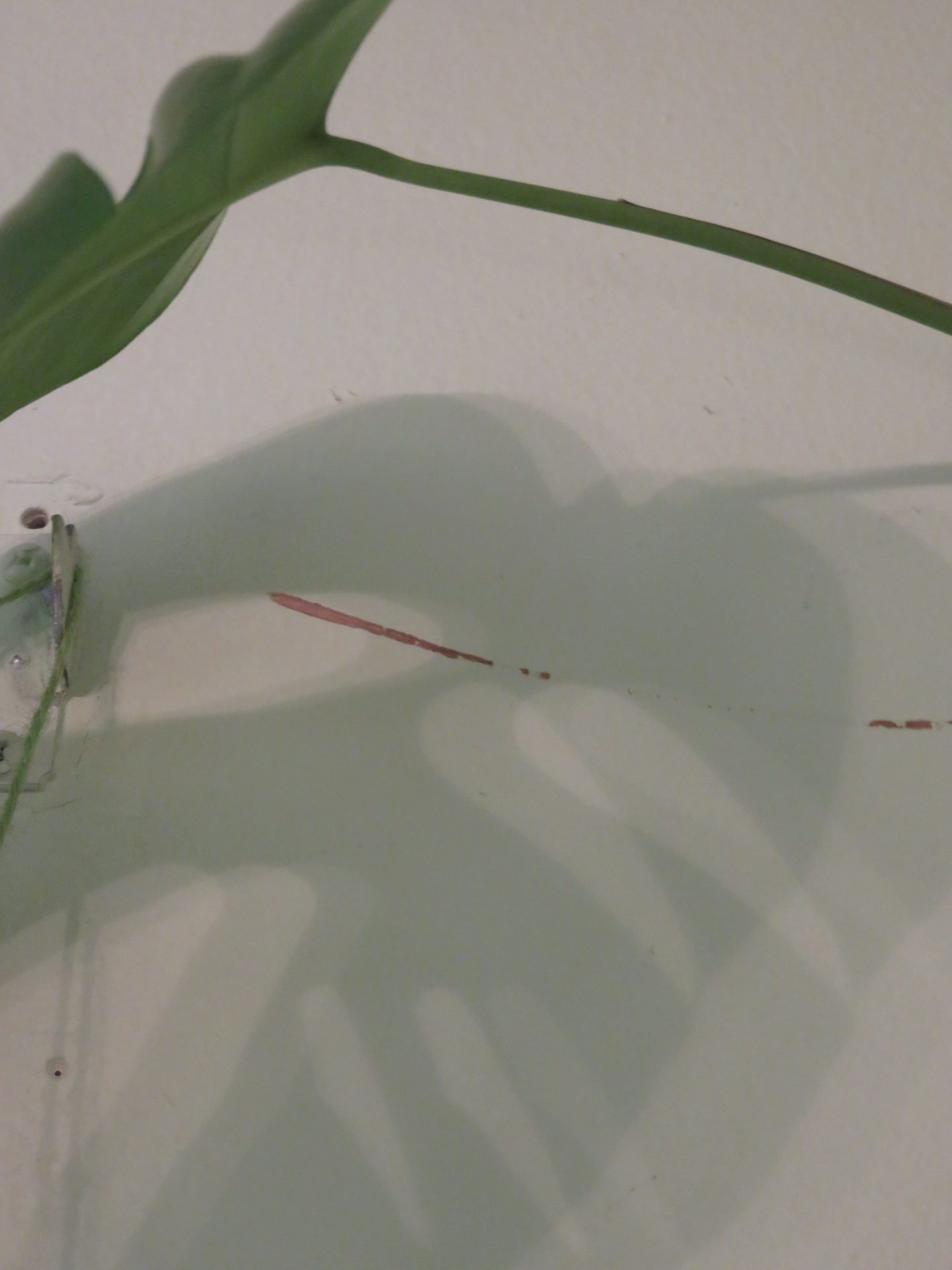 Aerial roots leave marks when they are removed

The pothos also has attached itself to my wall in the dining room and has climbed to the ceiling. In the left picture you can see one of the roots detached from the wall and left a mark. The moral of this story….keep your vines in hanging baskets so they don’t attach themselves to your walls. Or at the very least….keep them away from the walls. 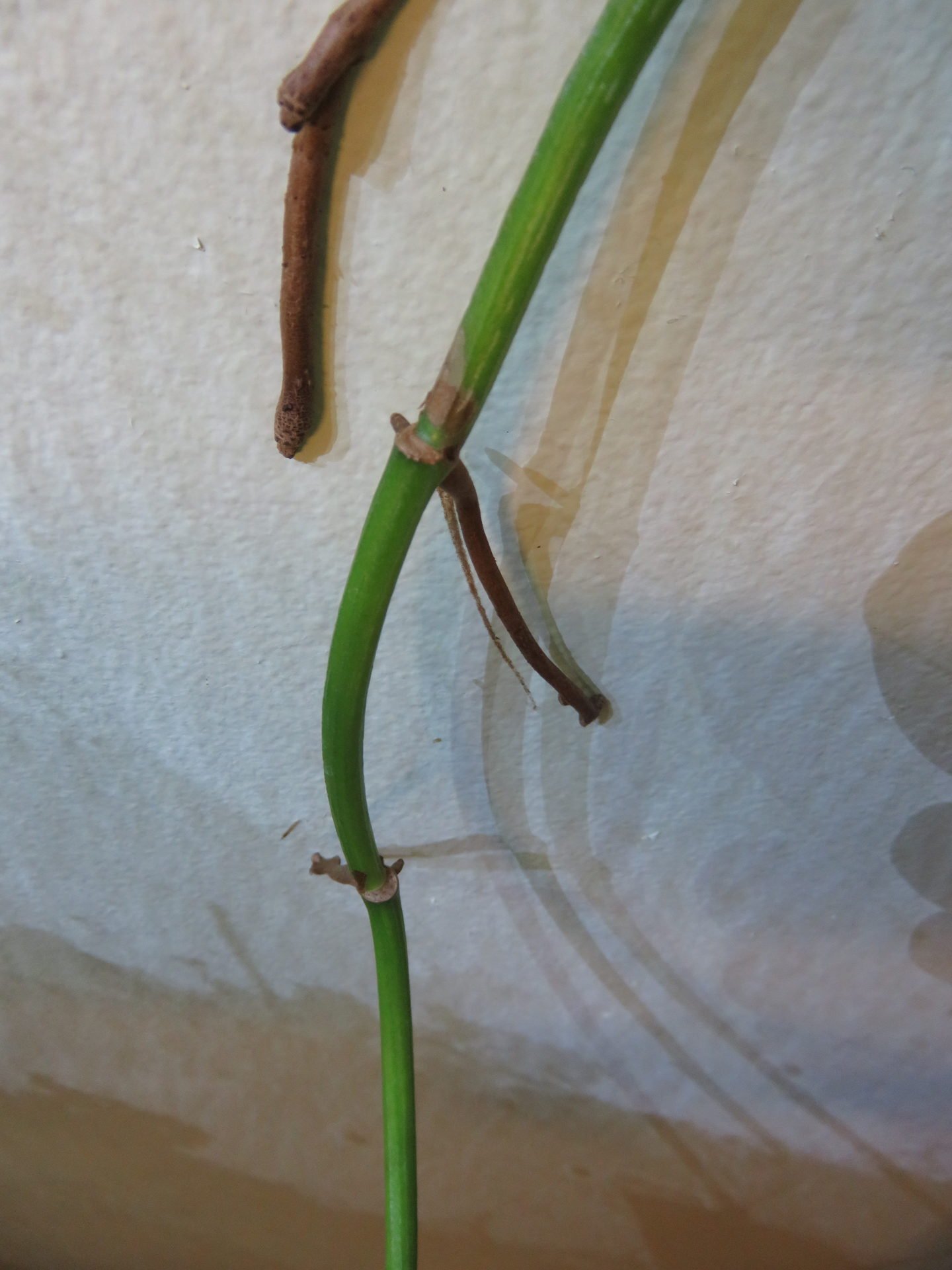 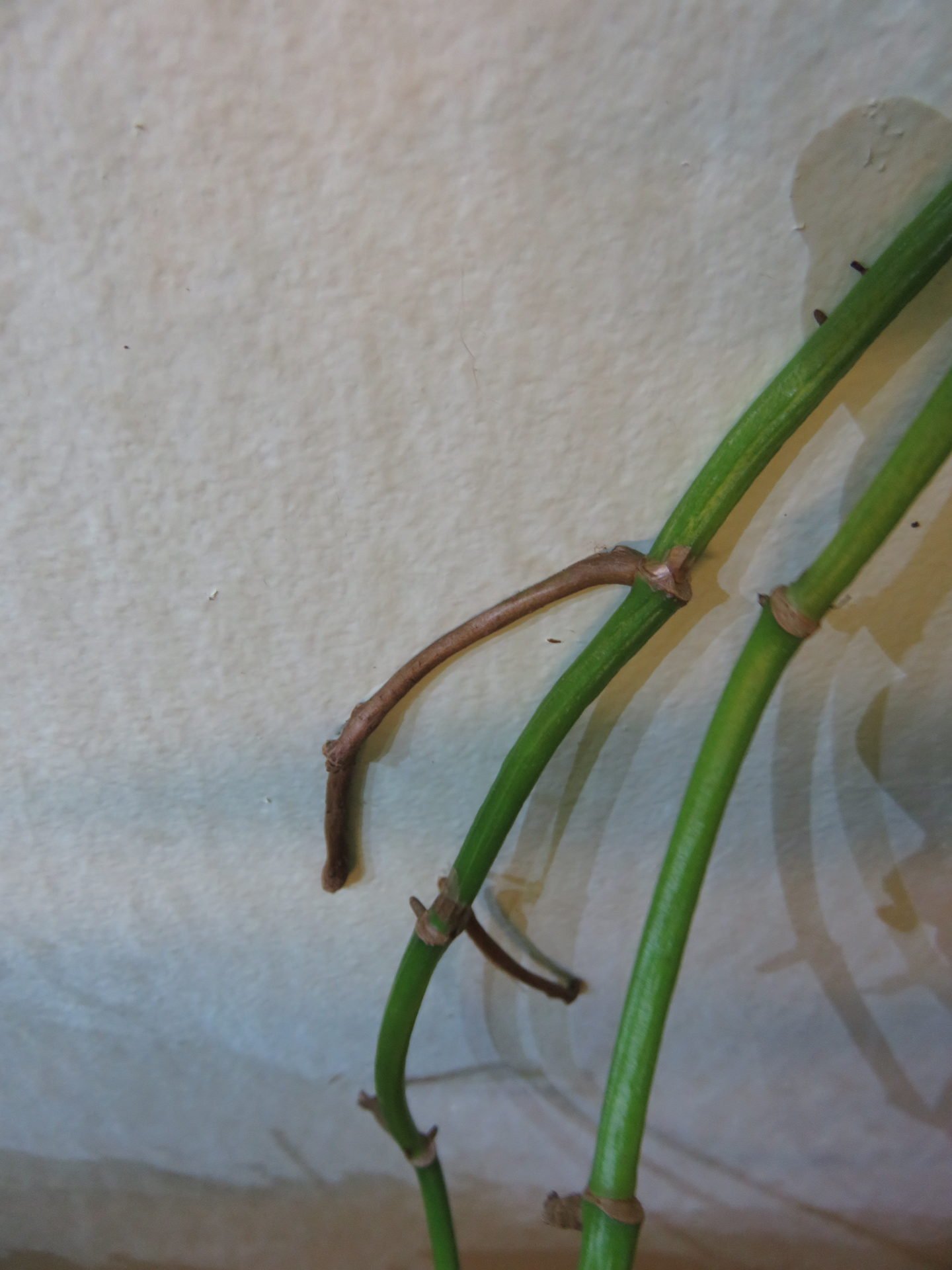 The aerial roots on the monstera below are so crazy. This plant is growing at the Belle Isle Conservatory in Detroit. The plant has climbed the huge palms in the palm house and then sent down aerial roots to obtain more water and nutrients to supplement that which is coming from the soil roots. These huge vines climb trees in the jungle and send down aerial roots to help them get enough water to support themselves. 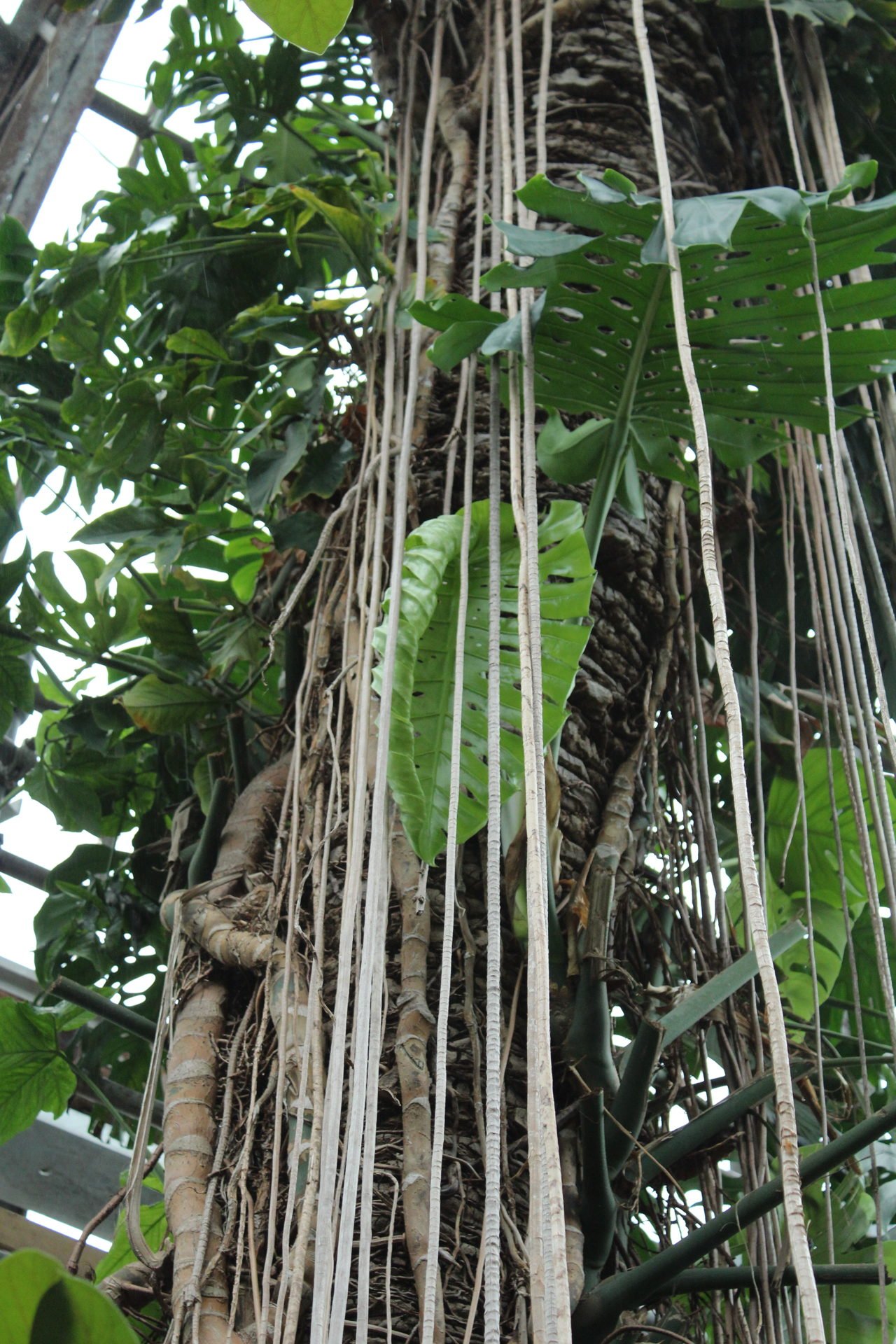 Aerial roots on a monstera at Belle Isle Conservatory

The philodendron below is at Mathaei Botanical Garden in Ann Arbor. As you can see, some of the roots have attached themselves to the brick wall, but some of the others have the aerial roots, but have not found the right spot yet. 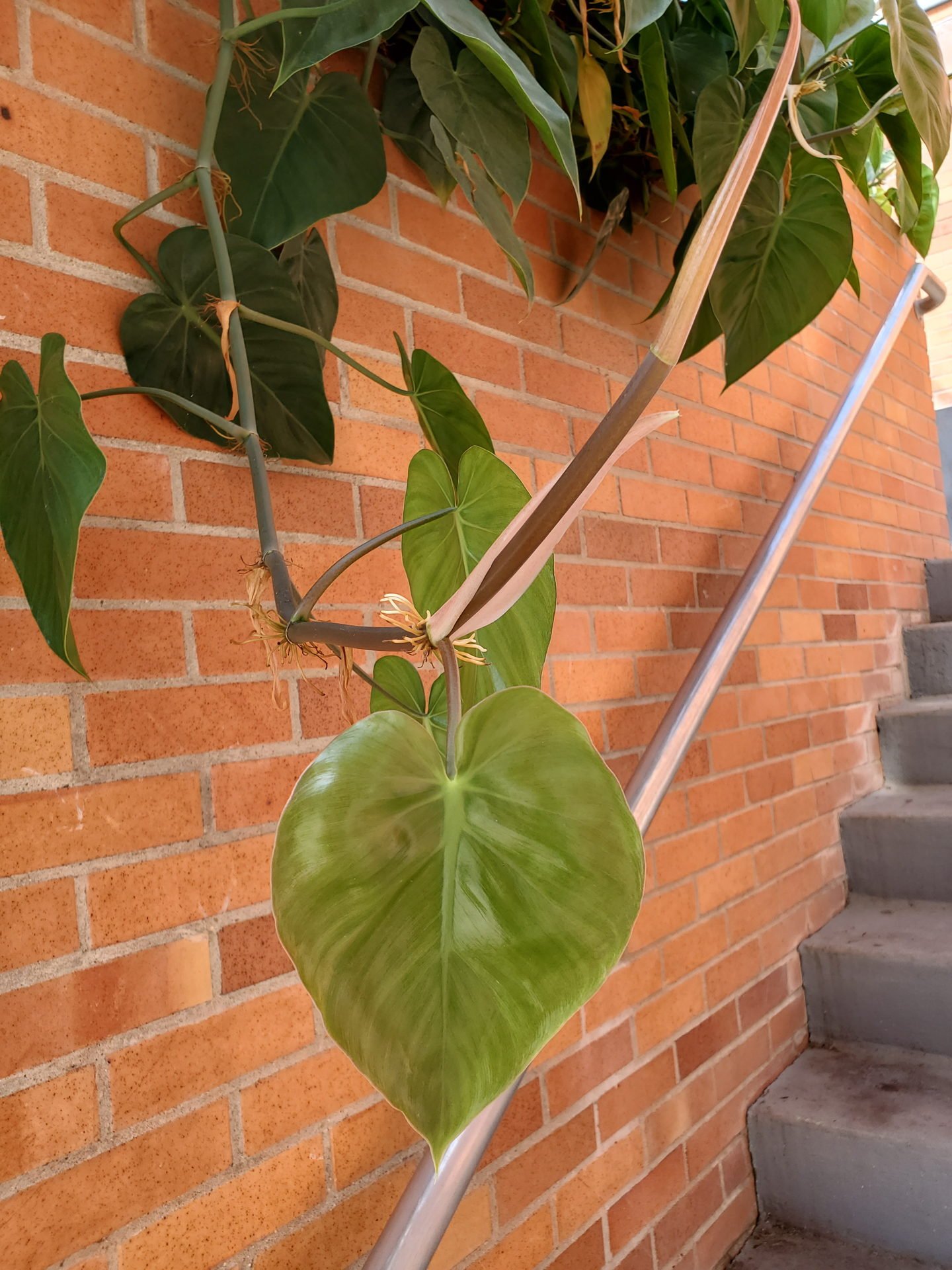 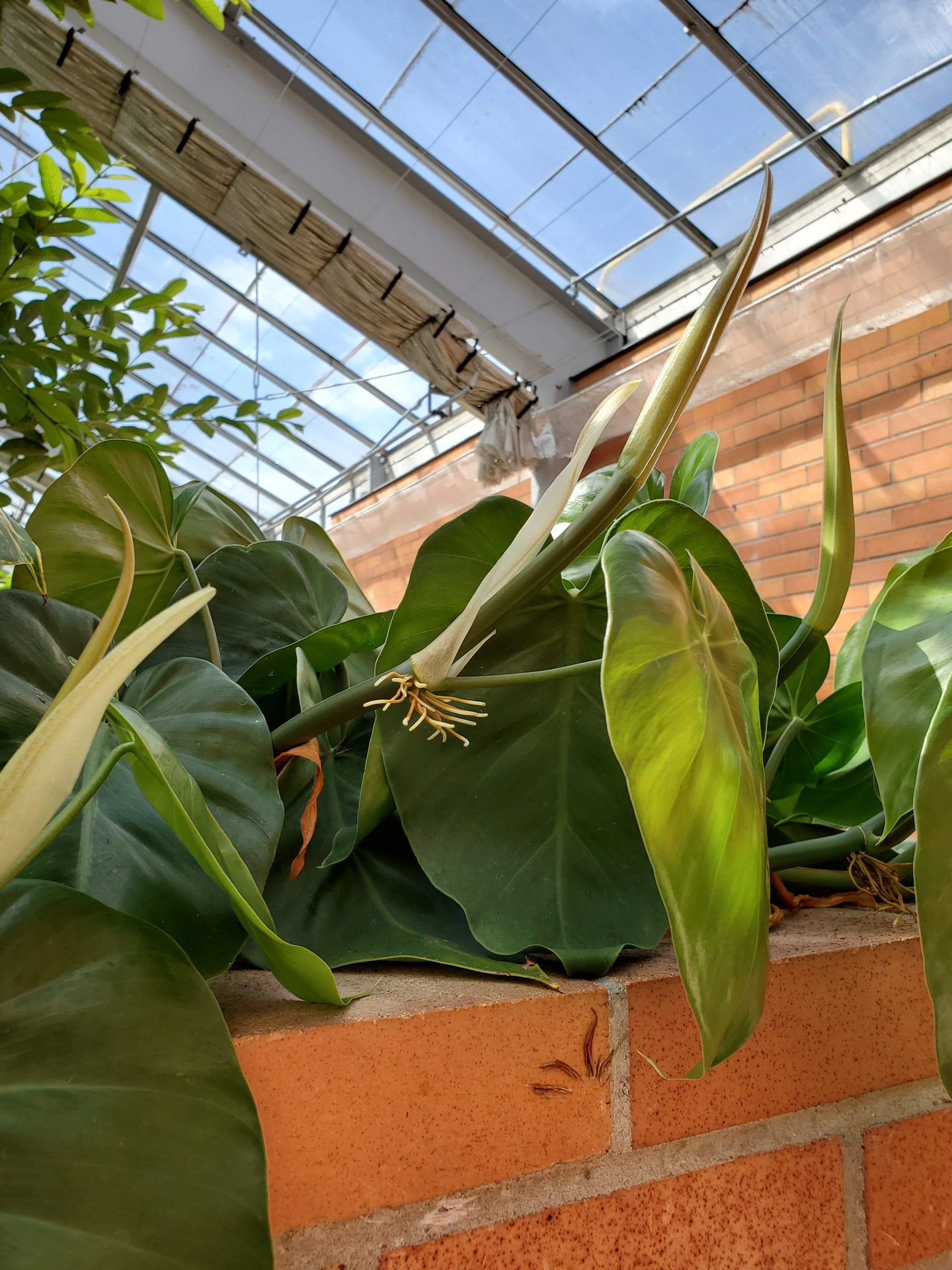 Aerial roots looking for something to attach to 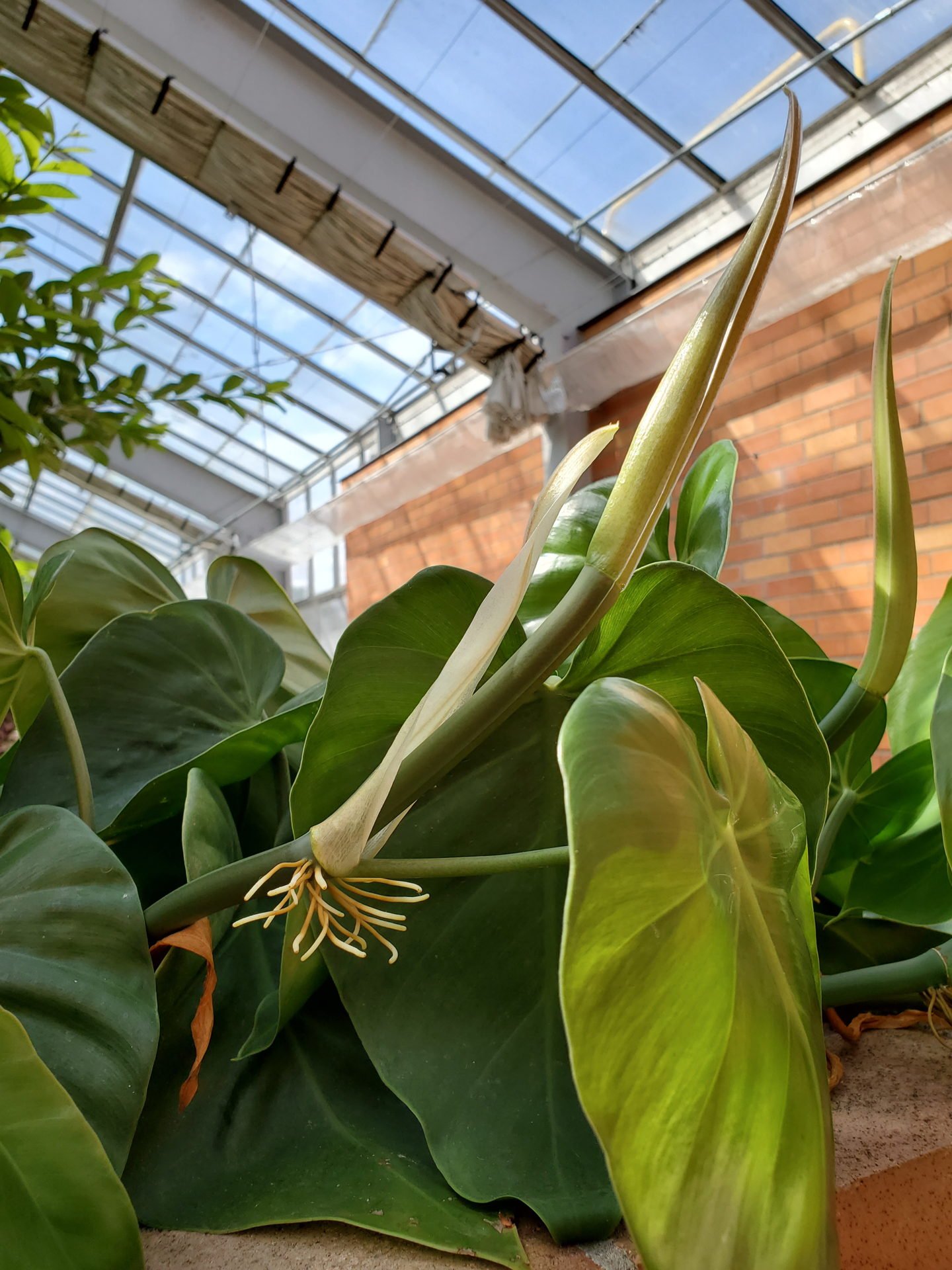 Aerial roots on a philodendron 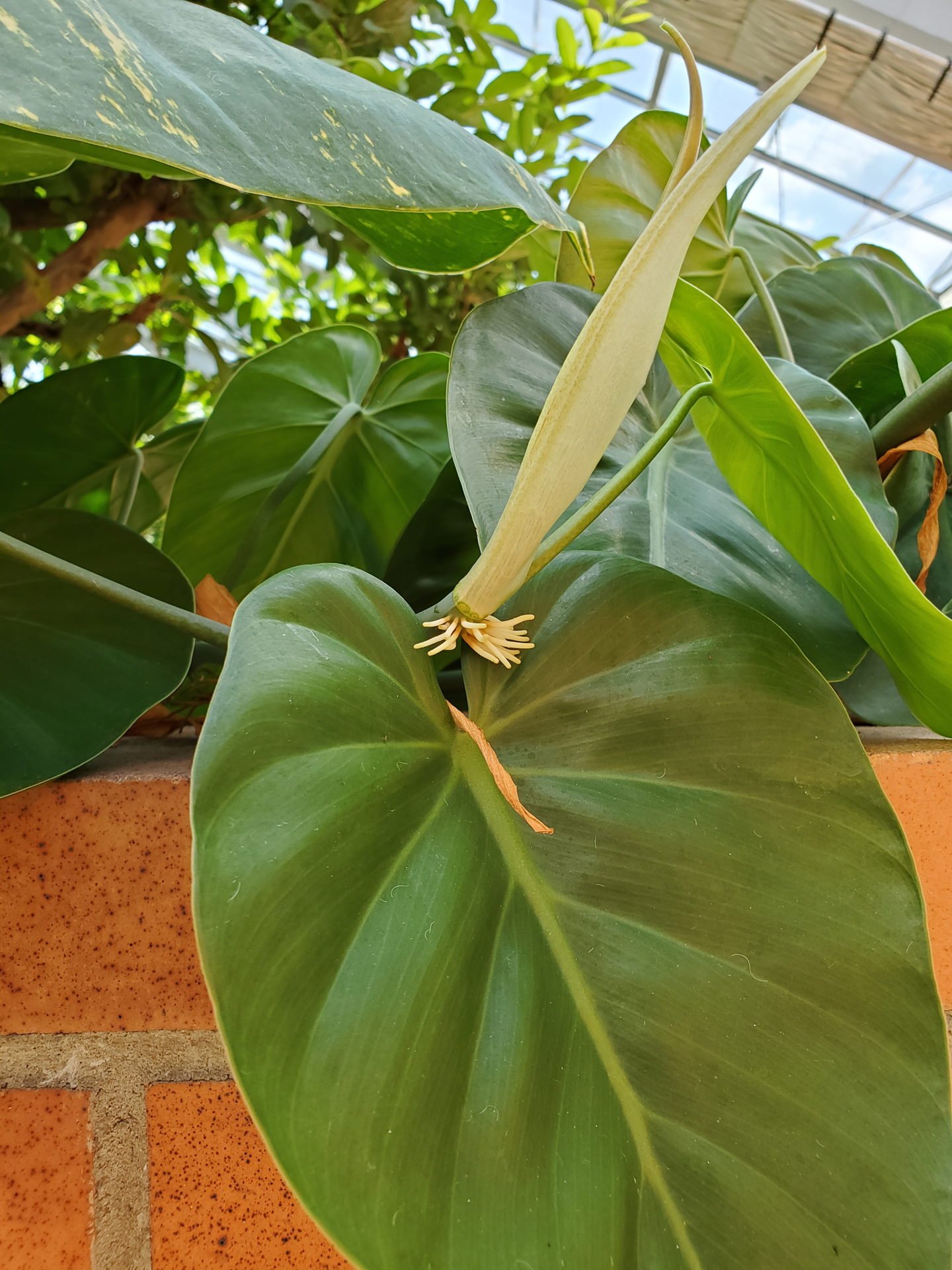 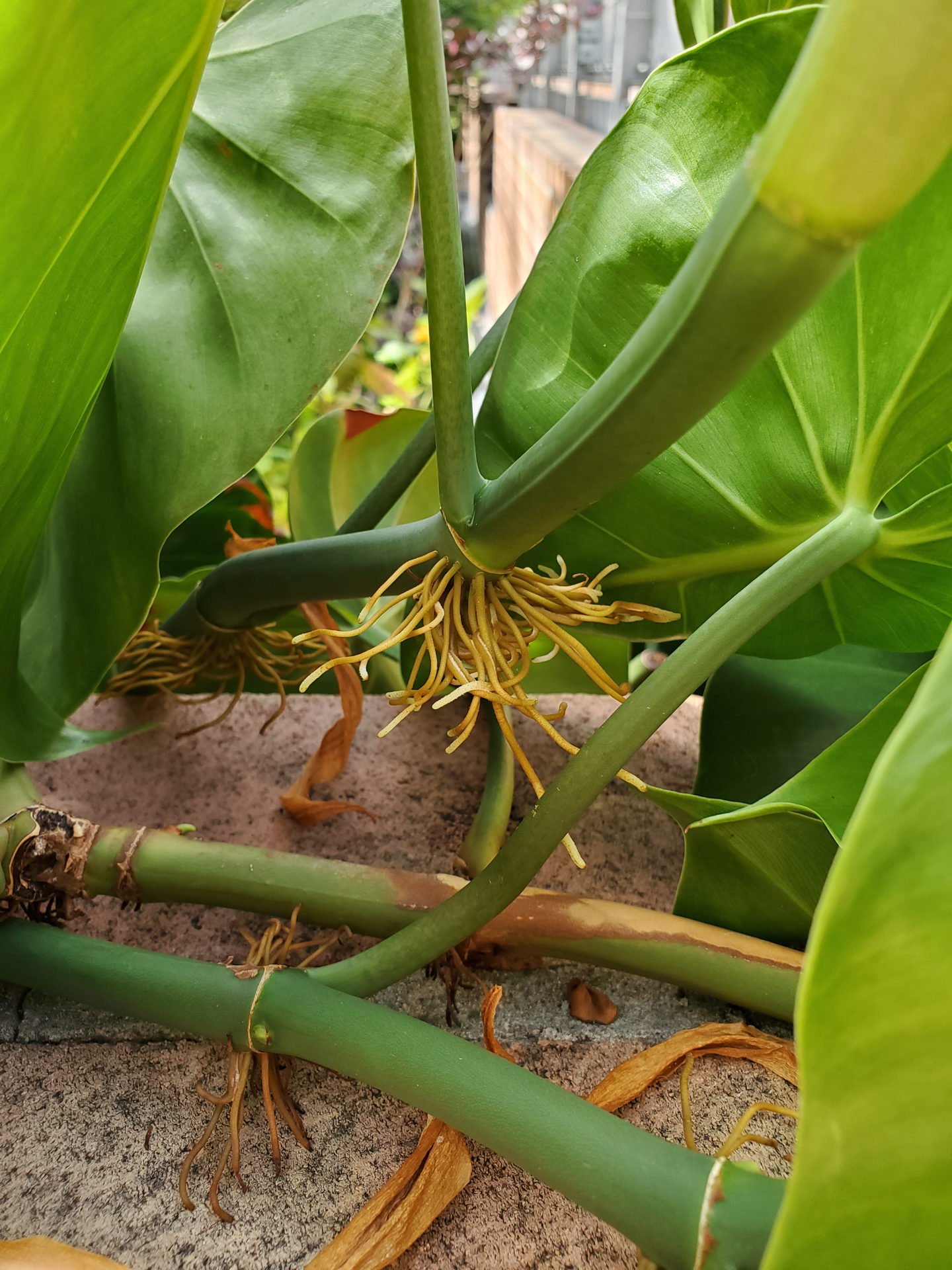 A ton of aerial roots 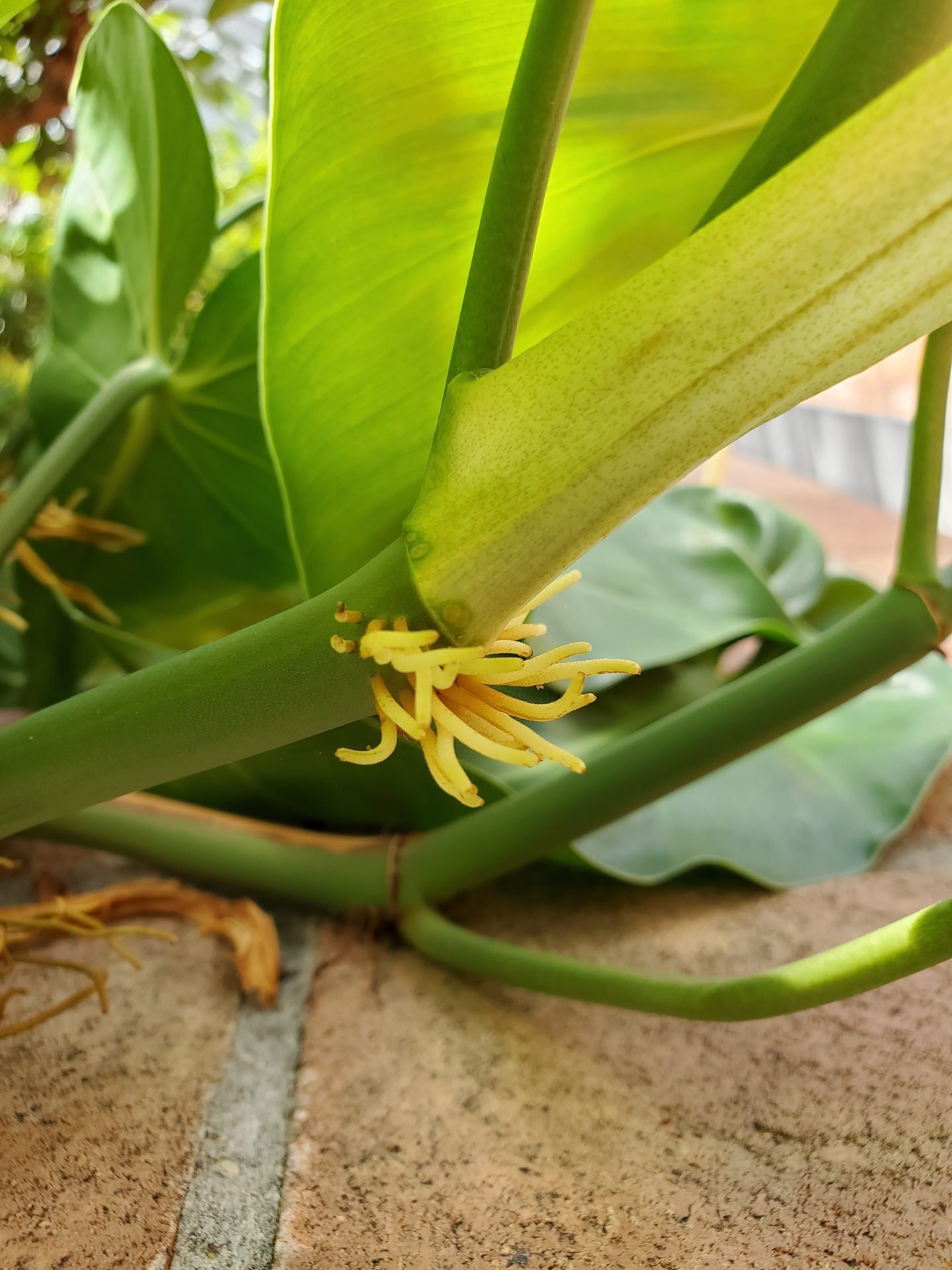 Close-up of the aerial roots

This mother-of-thousands plant has babies on its leaves that have already grown aerial roots. When they fall off the mother plant, they are ready to grow in their new environment. 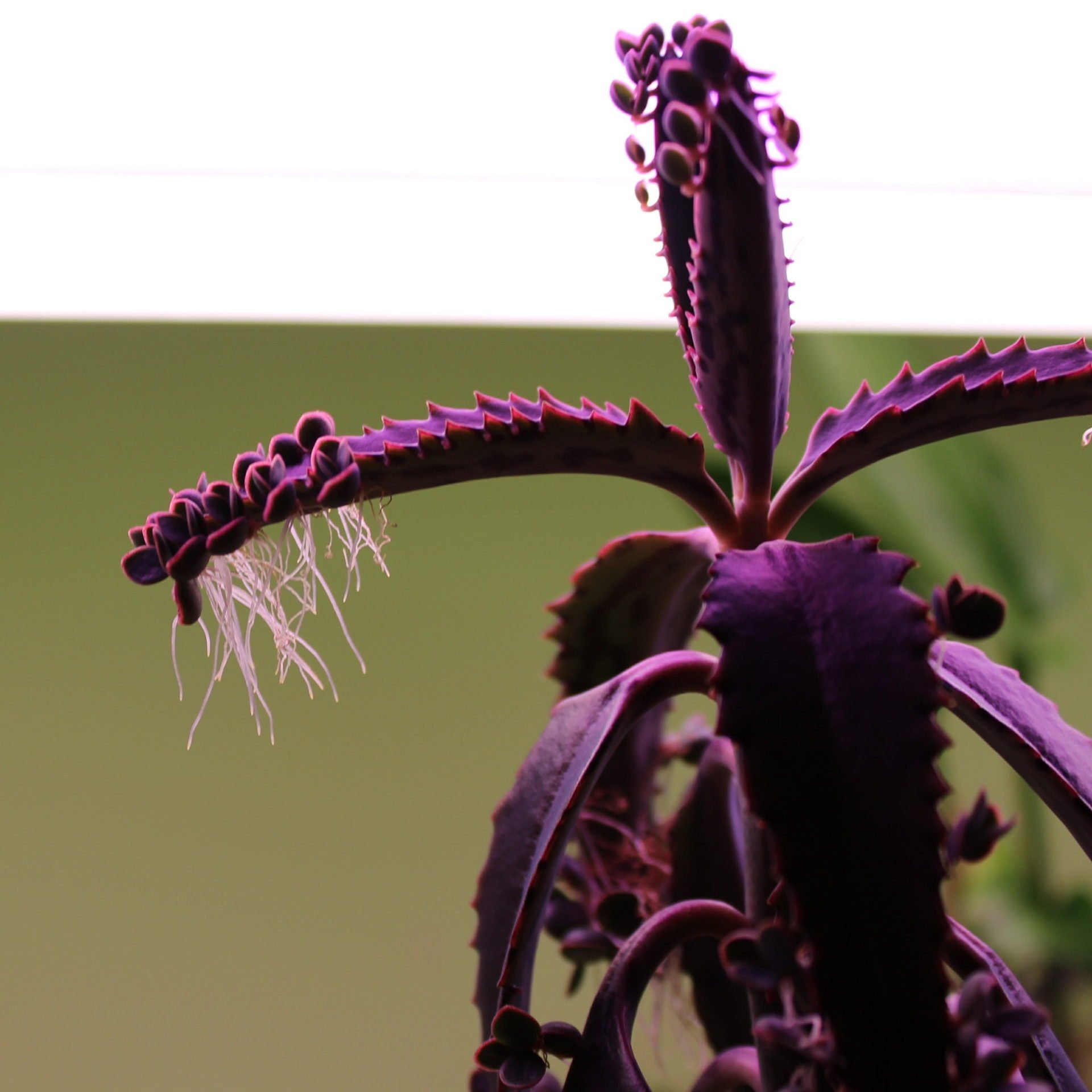 This mother of thousands plant is sending out aerial roots and when the babies drop, they will be ready to grow.

So what is the point of these roots? They are used to attach themselves to surfaces so they can support themselves. In their native habitats, these vines are usually attaching themselves to trees so they can grow up the tree to reach the sunlight. The roots may also be sent to the ground to collect water and nutrients for the plant, or to support the weight of the plant. Examples of that are the banyan tree, the schefflera tree, and the screw pine. In the case of the orchid and other epiphytes, the aerial roots are anchoring the plant to the surface it is growing on, but also is collecting water and nutrients. Pretty ingenious plants, if you ask me. Aerial roots are interesting additions to plants and yet serve a purpose as well. 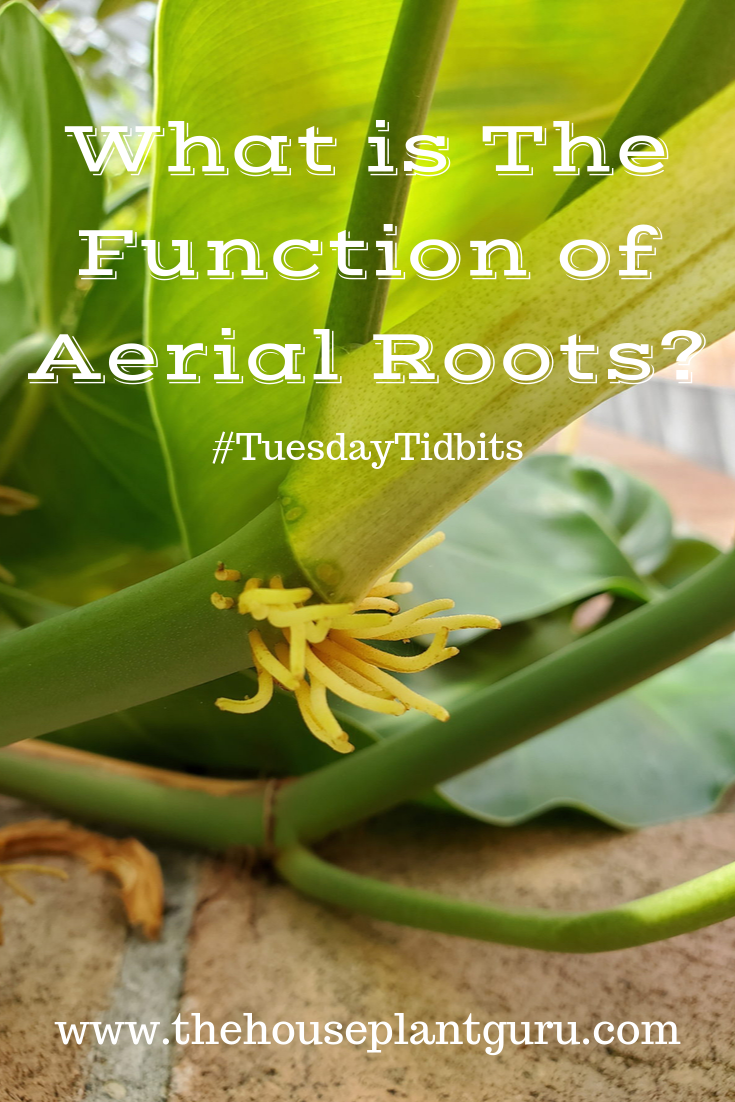