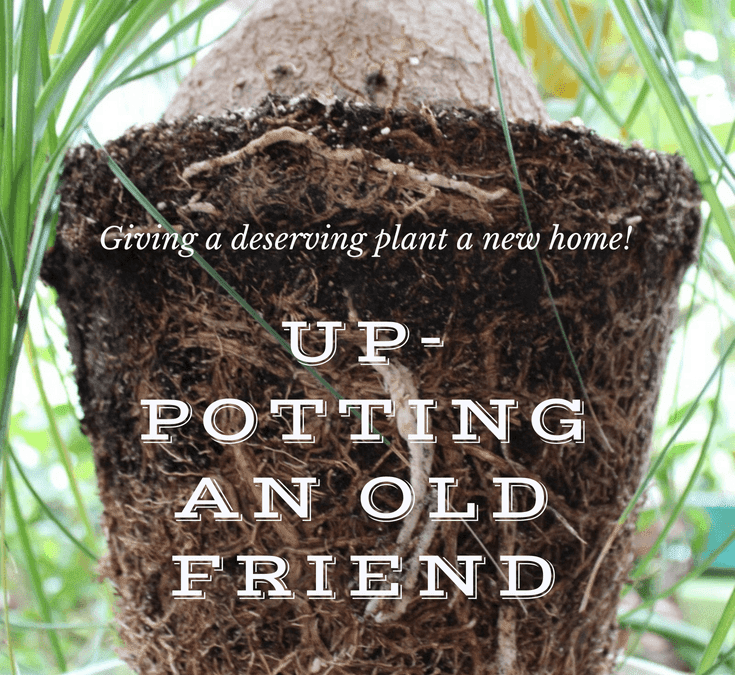 When I went to college in 1984, (yes, I am aging myself) I took this pony tail palm (Beaucarnea recurvata) with me. Of, course, in 1984 it was a bit smaller. It resided in a 2″ square pot which I purchased in Mt. Pleasant, MI at the local Kmart. It has been up-potted a few times, but hadn’t been in a long time. I did this a month or so ago, but re-potting (changing from one pot to the same size pot) and up-potting (changing to a larger pot) can be done all summer. If you need to up-pot though, it is better to do that earlier in the spring, so the roots can grow into the new potting medium while the plants are actively growing. 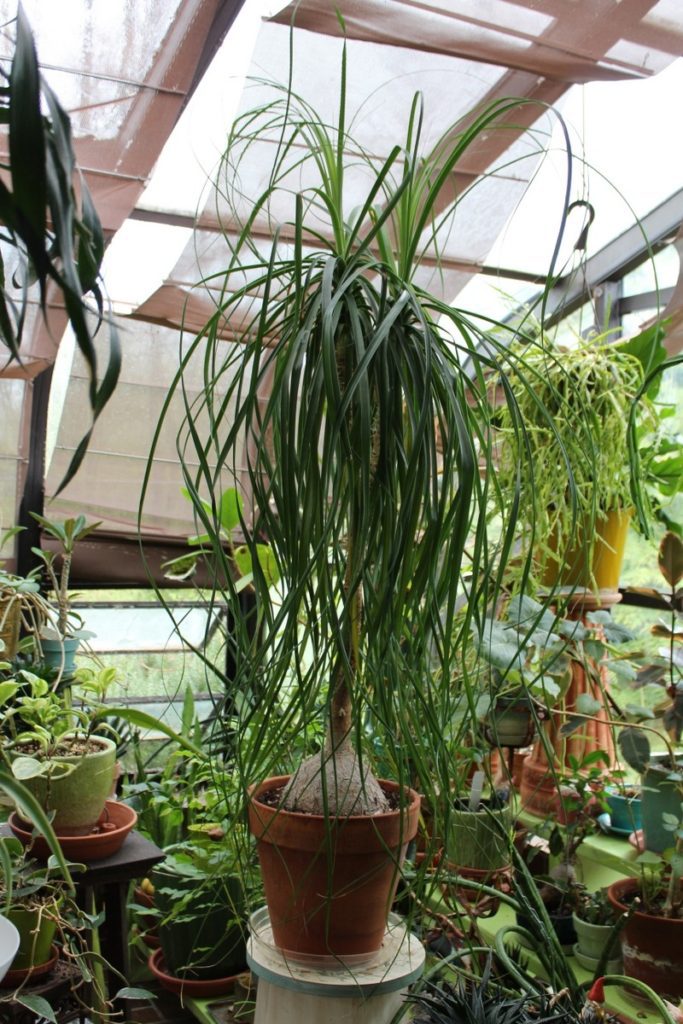 Ponytail palm that is root bound

How do you know it is rootbound?

I could tell the ponytail had become root bound and needed a new container. How? A few indicators. It was beginning to have yellow leaves on a regular basis, and when I watered it, the water took a longer than normal amount of time to run through the potting medium. This means the roots have filled the pot, but also may be an indication that the potting medium has broken down and the drainage is hindered. Also, the roots were visible at the top of the container. See the pictures below. 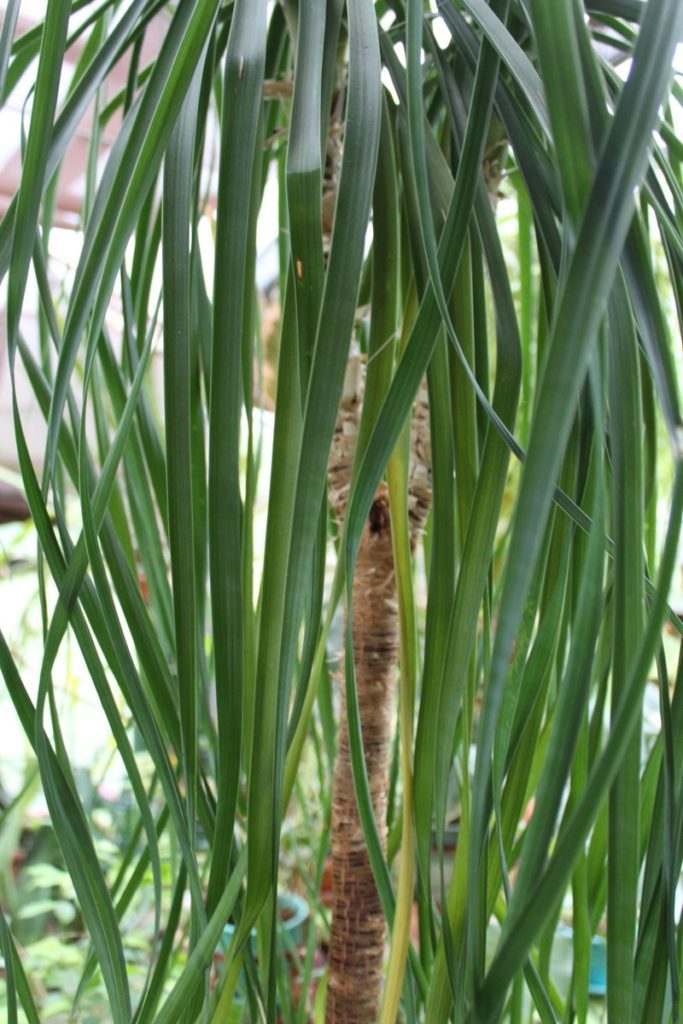 Yellowing leaves were a sign that the plant is root bound 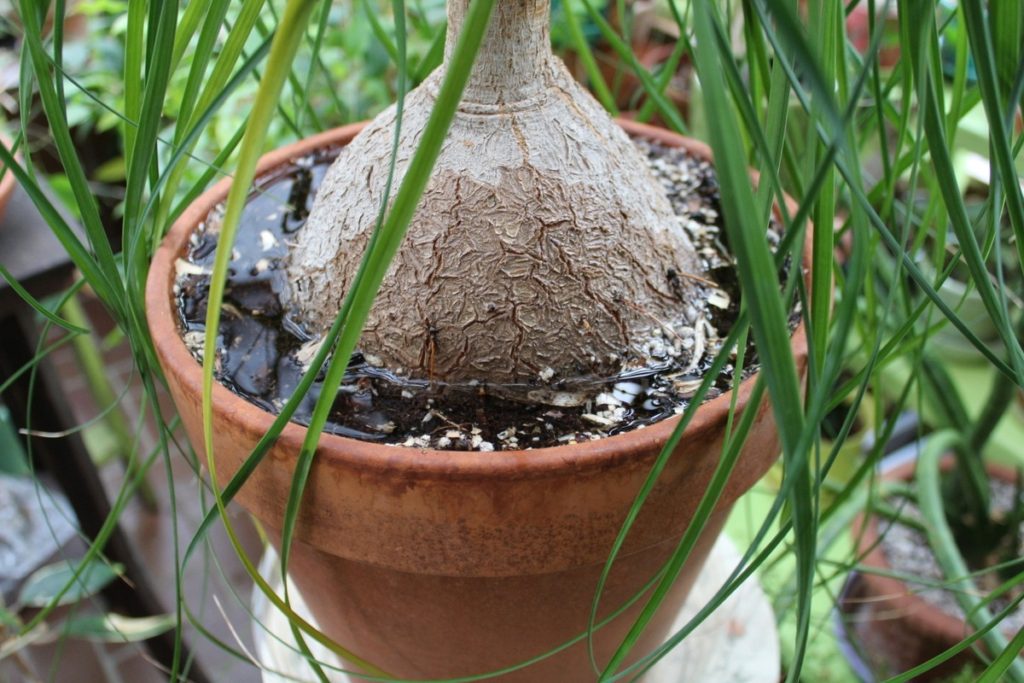 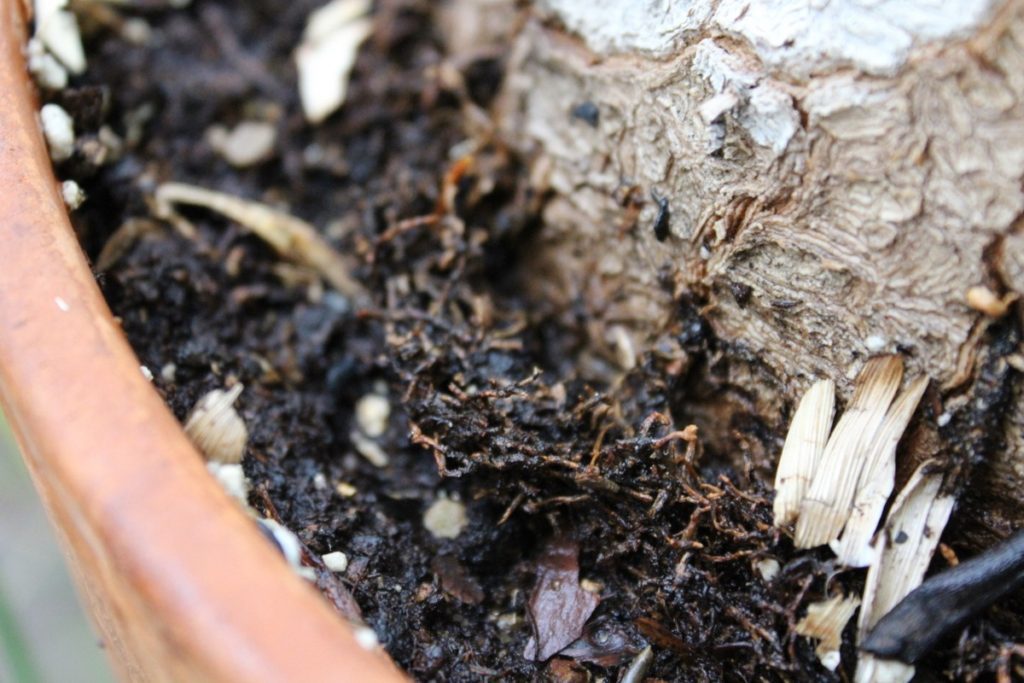 Though I wasn’t at Home Goods looking for a pot particularly, this one below (okay, I may have bought a smaller one to match….) jumped out at me, all the same. I loved it and thought it would be a perfect pot for my ponytail palm. Home it went with me. (Home Goods is one of my downfalls….how about you?) 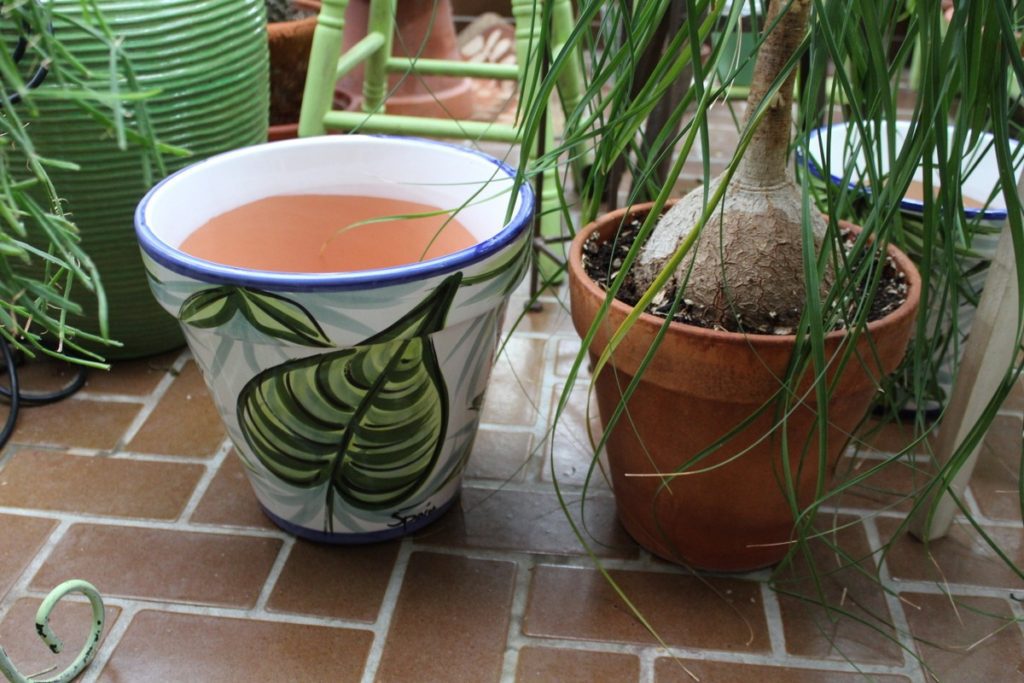 Now to take the plant out of the pot and transfer it to its new home. Easier said than done. 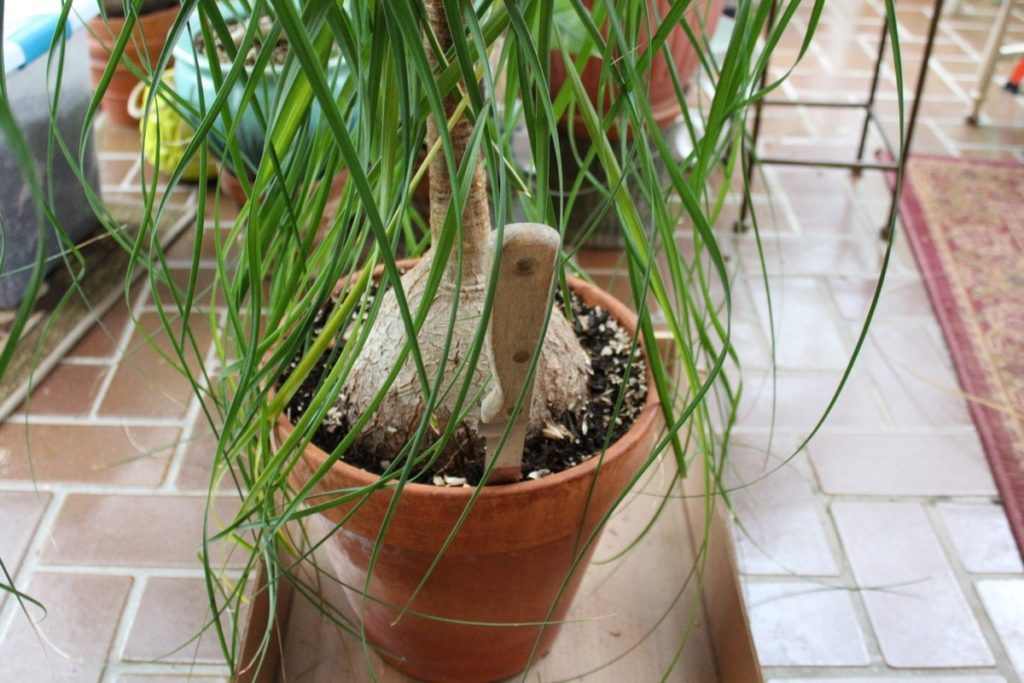 Getting the plant out of the pot

I attempted to get the plant out of the pot, but to no avail. It had been in this clay pot for a long time, and it was solidly stuck in there. So what to do? I went to the kitchen and got a knife. What else could I do? I slid the knife down between the root ball and the container and worked it (not easy) around the pot, separating the root ball from the container. Then I slid the plant out of the pot. If the knife trick hadn’t worked, I would have had to break the pot off the plant. As you can see in the pictures below, the roots had filled the pot and in fact, in the bottom of the pot, there wasn’t much medium left, just roots. So I used a serrated knife to slice the root ball up the sides and actually cut some roots off the bottom. This will stimulate the plant to grow new roots. 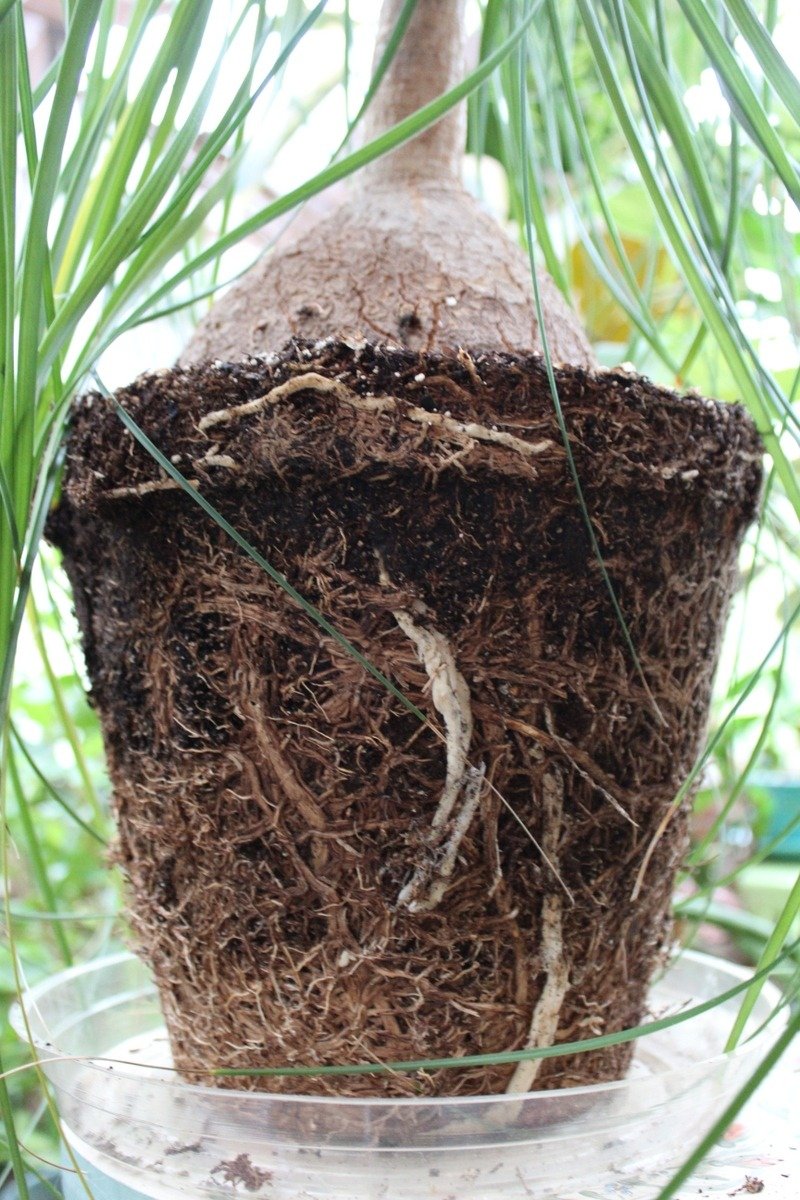 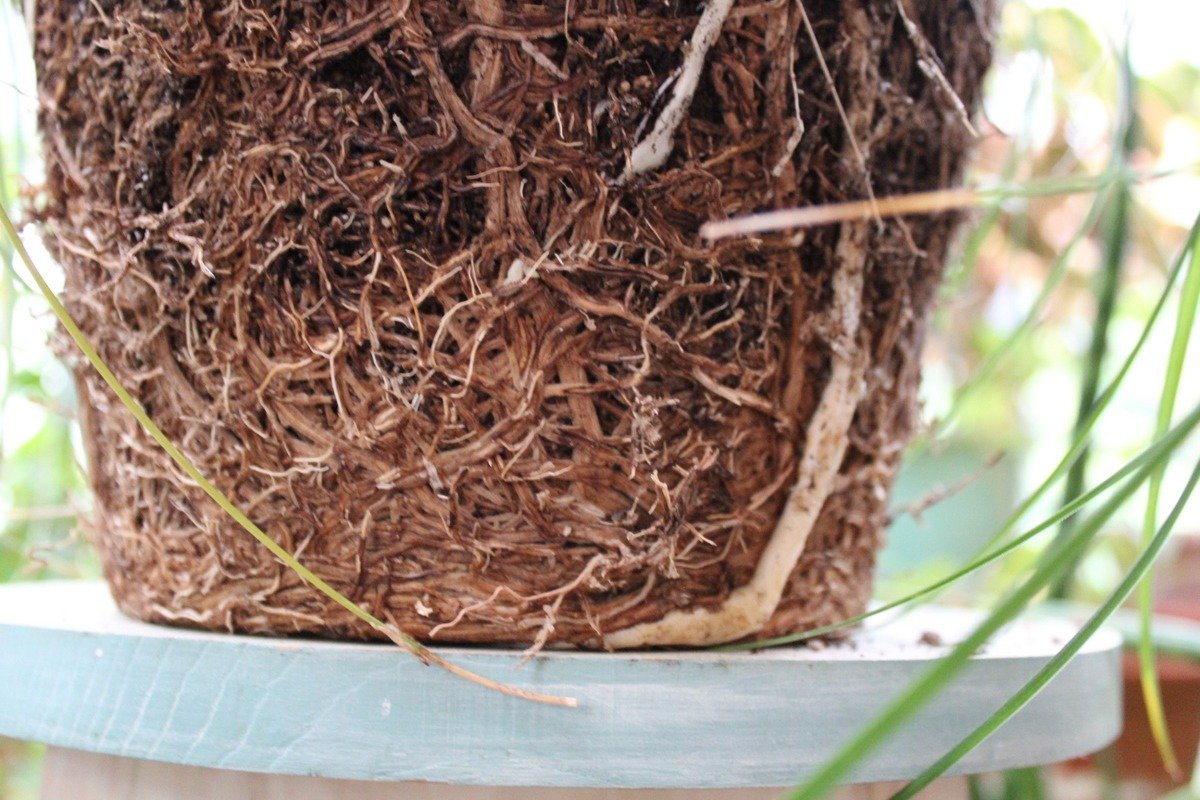 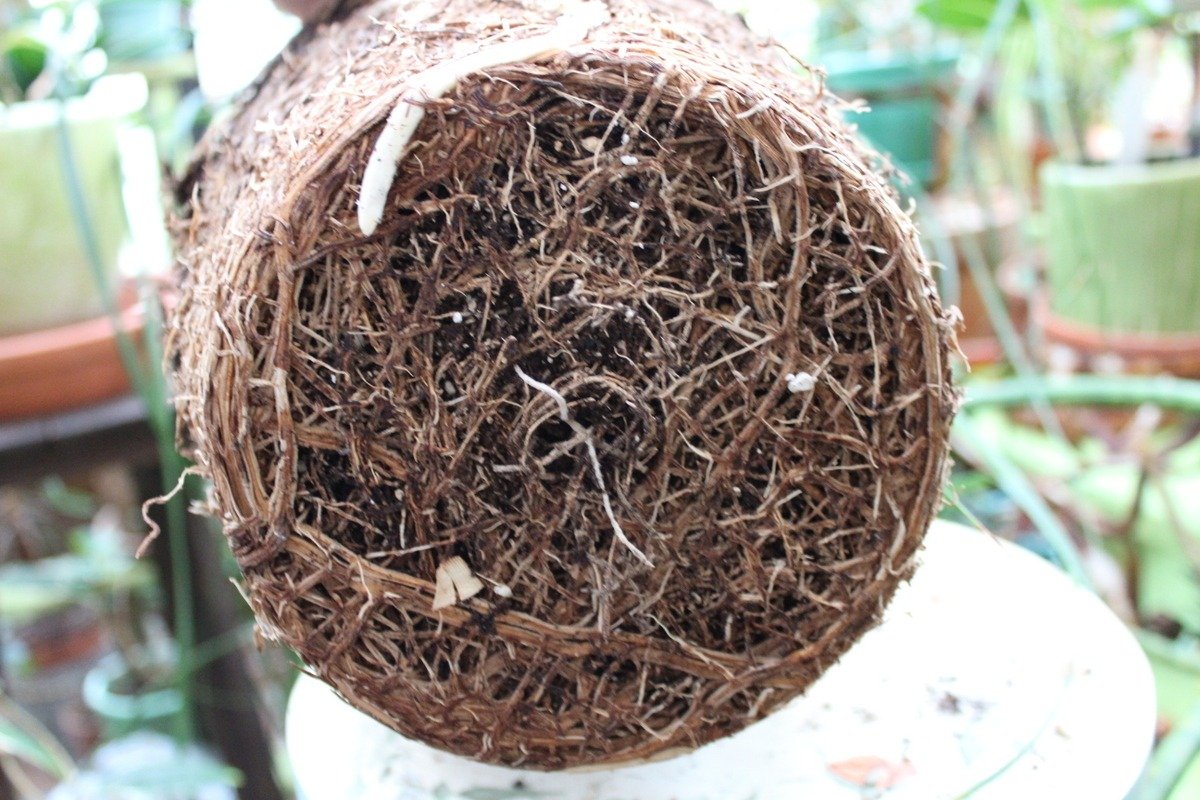 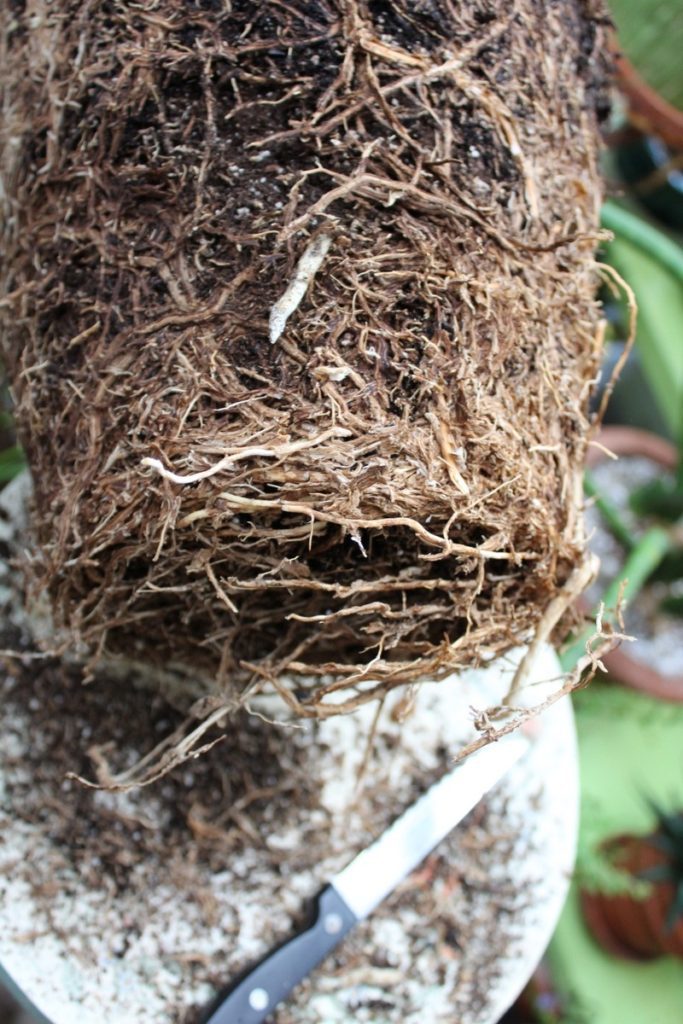 I cut the root ball to loosen it up 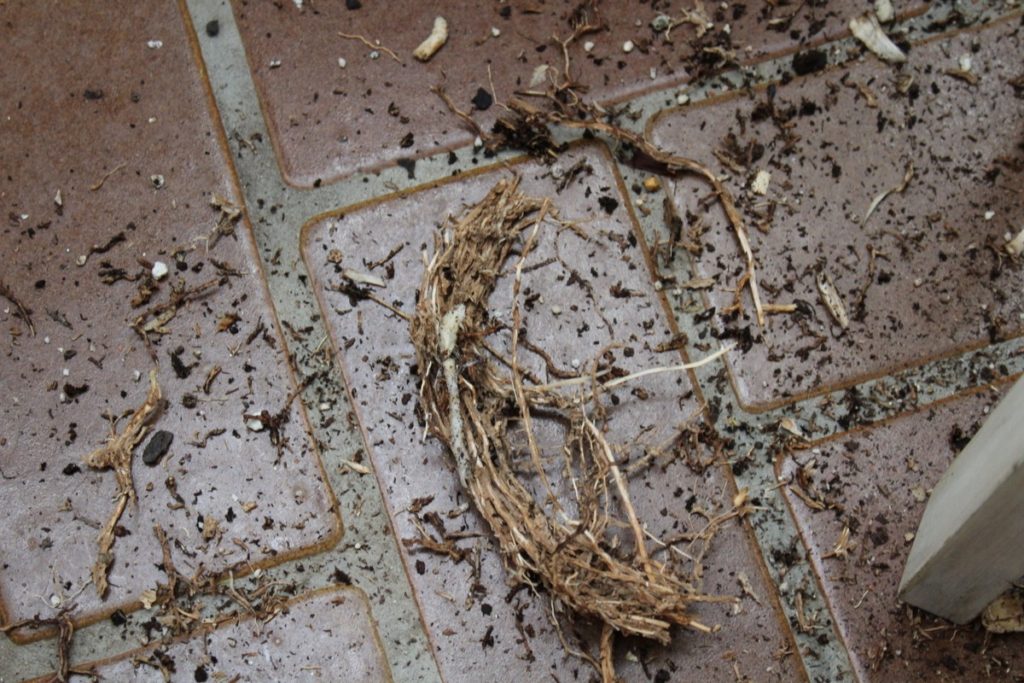 Some of the roots I cut off

As you an see in the pictures below, the pot is just one size up from the previous one. There is about an inch around the root ball of the plant in the new container. Make sure when up-potting a plant, not to choose a container that is much larger than the one it has vacated. Too much extra potting medium around the old root ball could possibly cause root rot. I added fresh medium to the bottom of the pot, after placing a piece of screen over the hole. I didn’t want potting medium to fall out, but do want the water to be able to drain out. I don’t use pot shards or pebbles for “drainage”. This is an outdated practice and has been scientifically proven to be unnecessary. Leaving the drainage out allows the roots more room to grow and actually the drainage is better without the pebbles. The extra medium in the bottom will bring the plant up to the correct height in the pot, leaving about an inch at the top so that when the plant is watered, it doesn’t run over. I added fresh medium around the edges, tamped it down slightly, and watered it in to settle the medium. 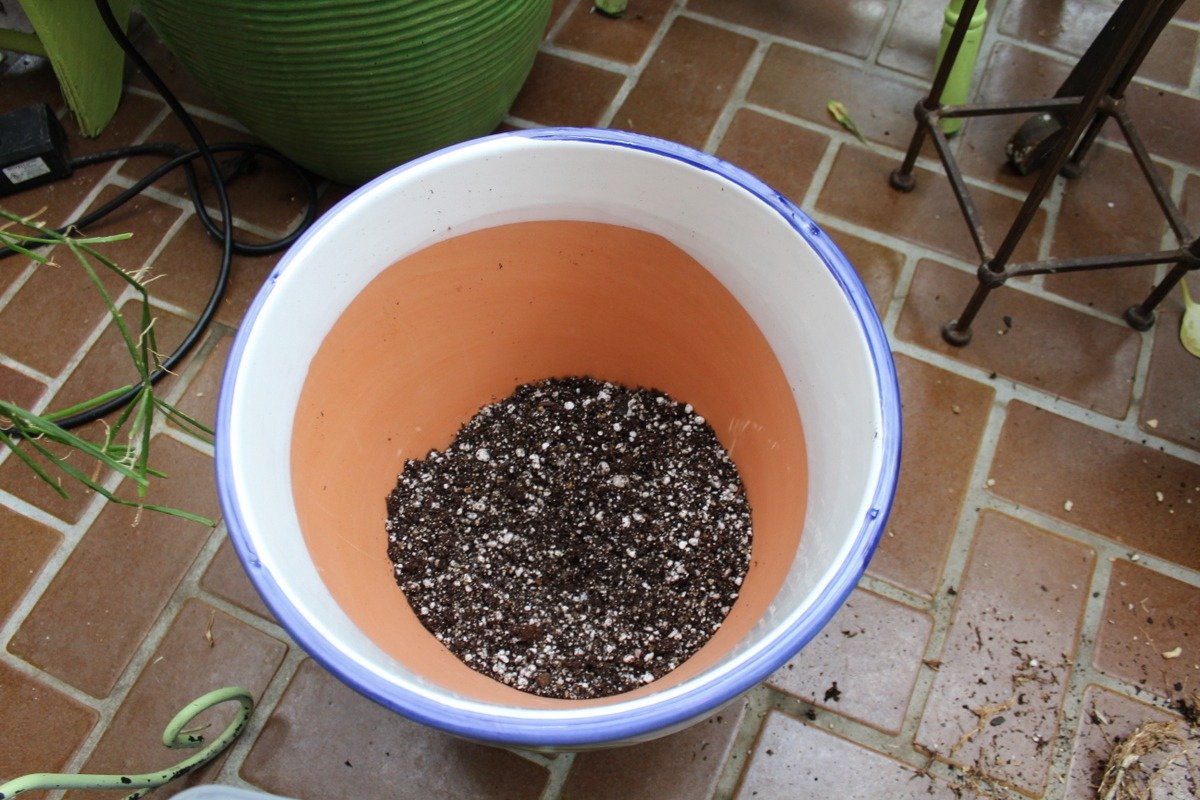 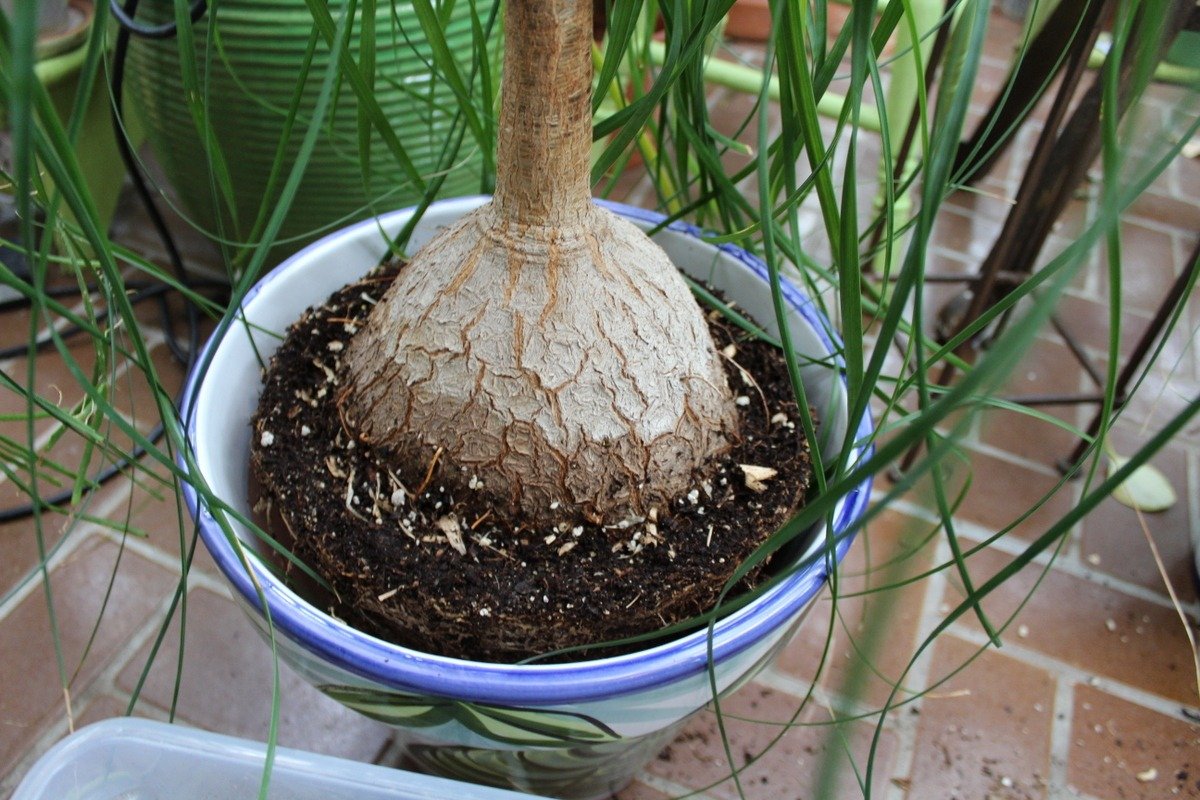 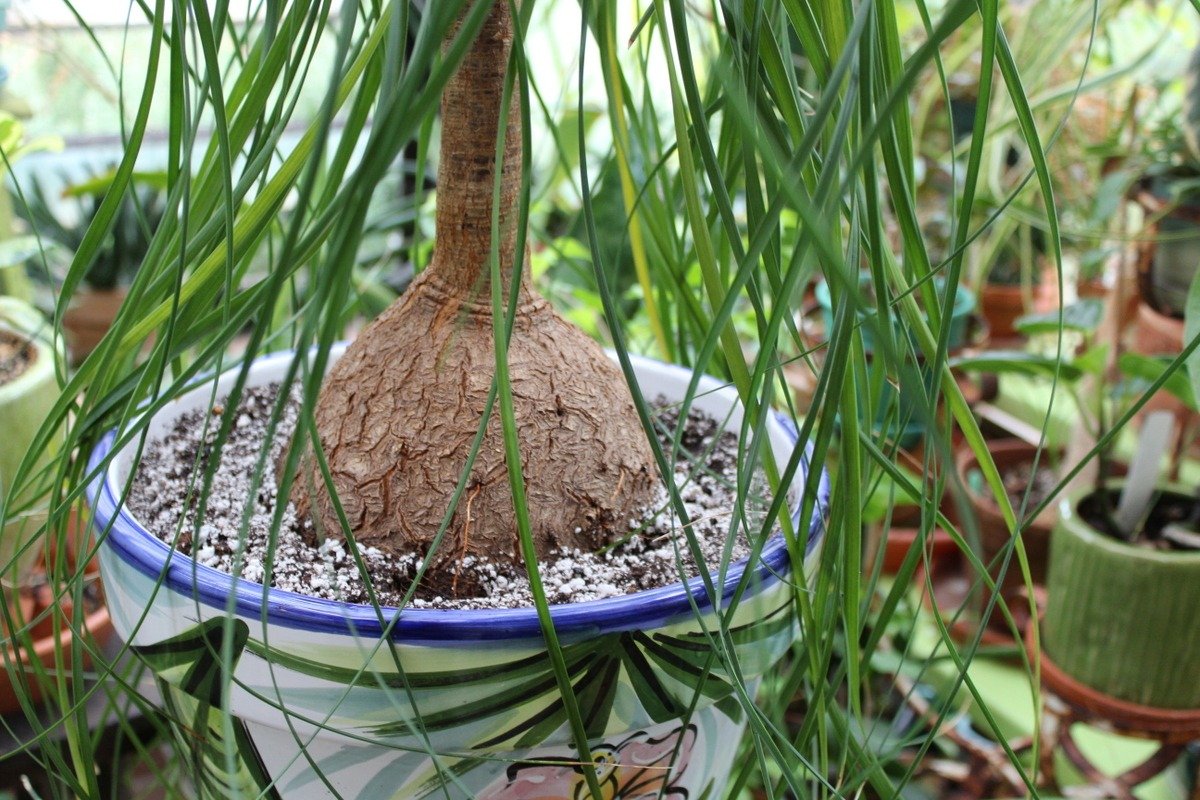 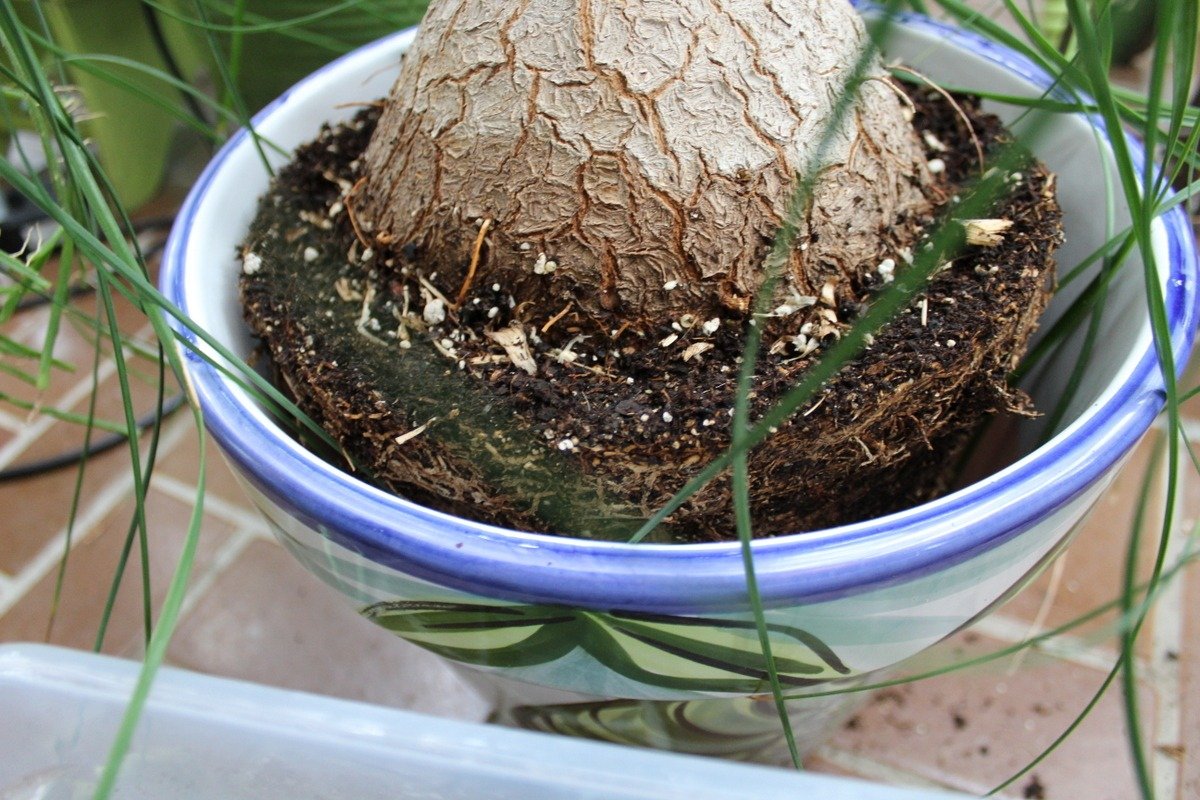 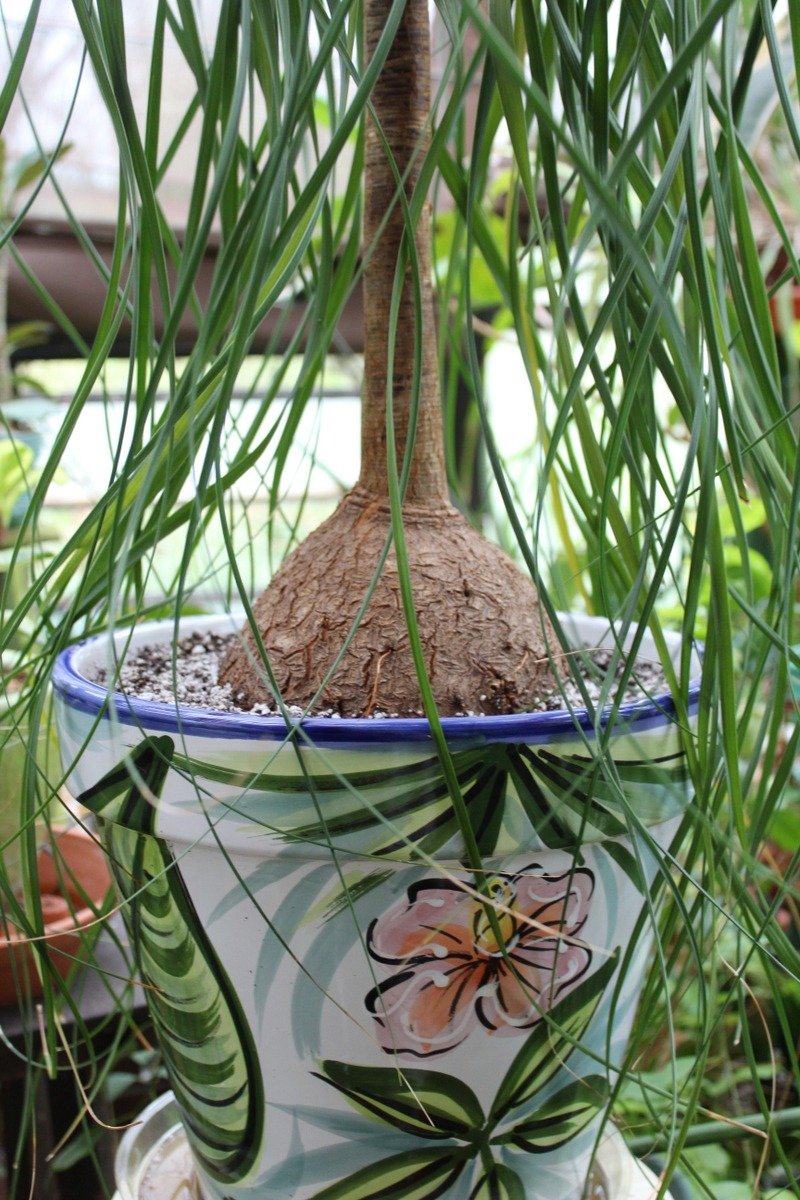 I think my old friend is going to enjoy stretching its roots in the new container. I’m sure I heard it give a sigh of relief.

New home and a sigh of relief from the plant