Scale Insects and How to Control Them on Your Houseplants 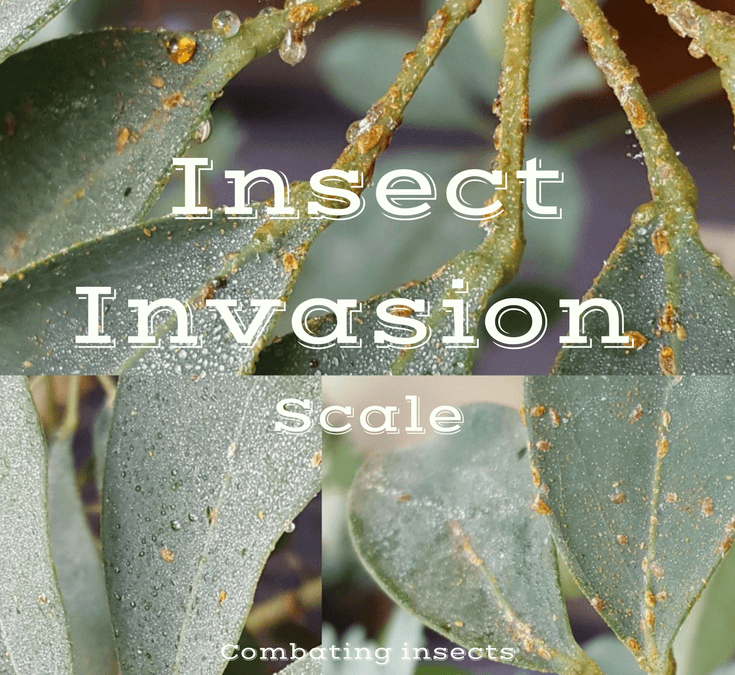 In this, the second installation of the insect invasion series, we are going to talk about scale. We talked about aphids in the first installation. The second plant I saw a few weeks ago was located at a library; a large Schefflera arboricola that I noticed right away. The shiny leaves caught my attention from across the room and it compelled me to walk over to inspect it. The extensive problem was more apparent as I walked up to the plant and MY FEET STUCK TO THE CARPETING! The plant was so covered with scale, the carpet was covered with sticky honeydew, which I mentioned in the first installment is insect excretion. YUCK! 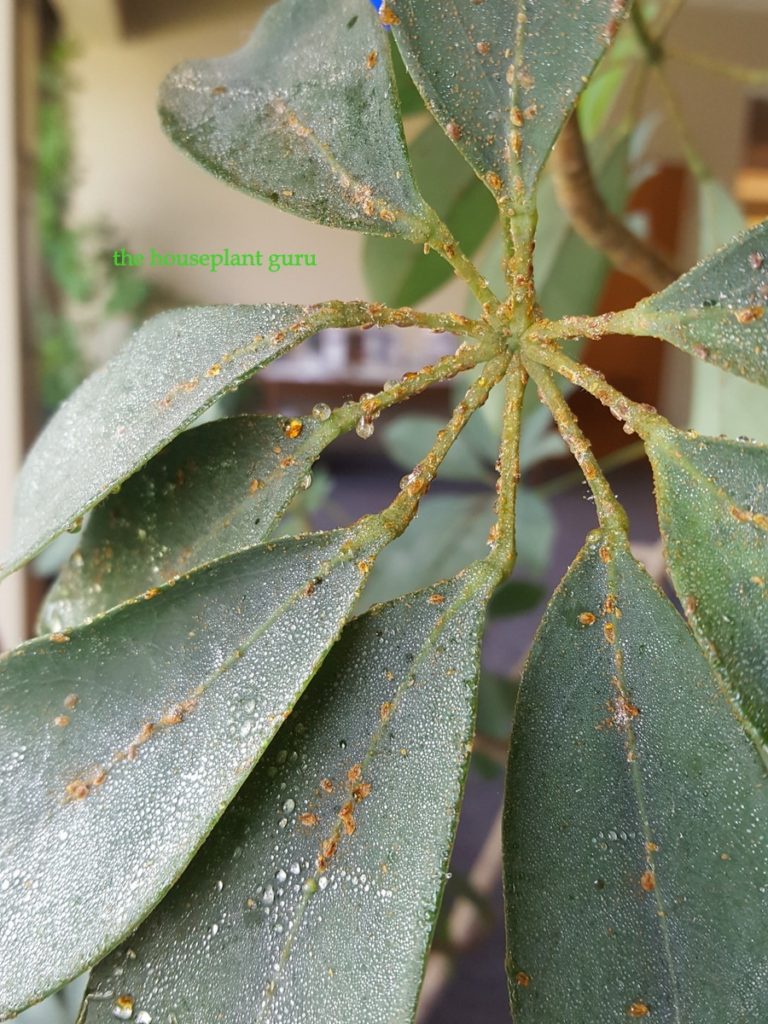 There are two types of scale; hard or armored and soft. The hard scale does not produce honeydew, so we know that the scale on this plant is considered soft scale. The honeydew on this plant is excessive. Scale starts out as crawlers which means just what it says, they crawl around until they find a place to settle down and start eating.

What is the problem?

So the first thing to do when you feel there is a problem with your plant is to find out what the problem is. Is it cultural? Water, light, soil, etc. Or, does it have an insect or mite attacking? After you’ve found the origin of the problem, identify it. The identification of the problem, i.e. insect, is key in figuring out the solution and treatment. If your plant is infested with spider mites, for example, you are not going to use an insecticide, since mites aren’t insects. The chemical wouldn’t work  and spraying your plant willly nilly with whatever chemical you have, is not a good idea. Chemicals should be used sparingly and only after completely reading the label. 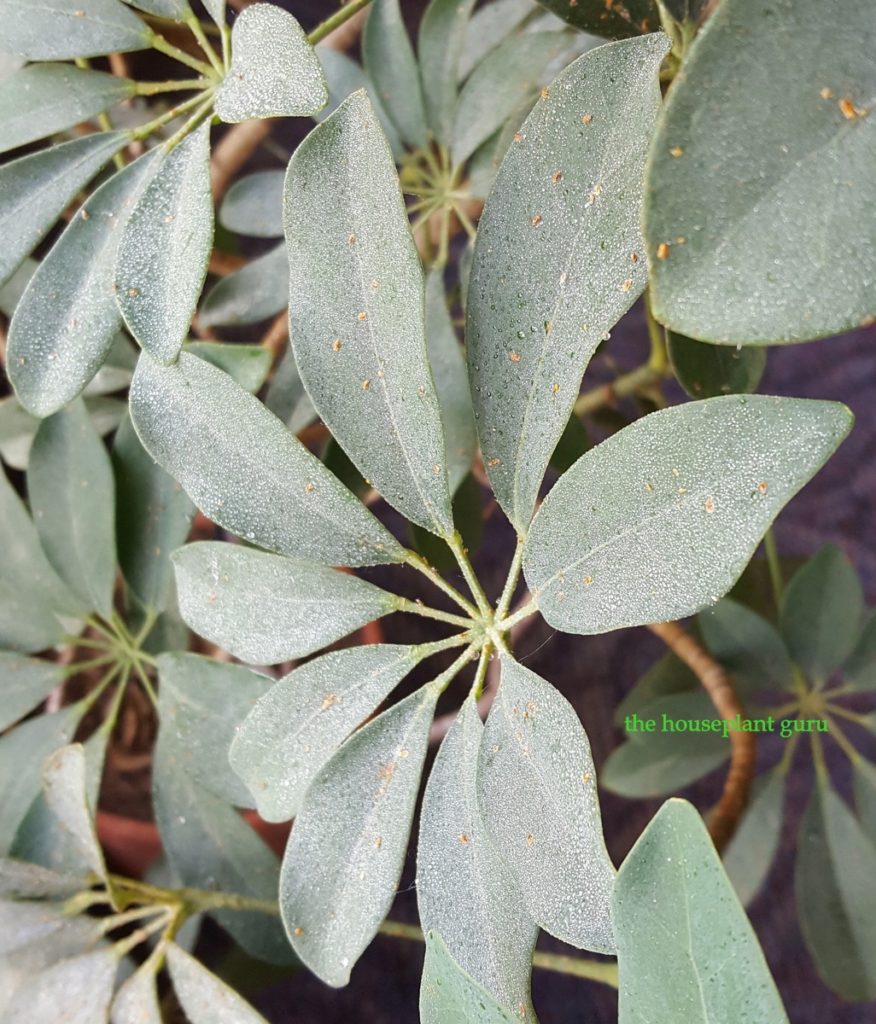 These leaflets are completely covered with honeydew (scale excrement)

Can it be saved?

In my opinion, this plant is unable to be saved, in this particular situation. Why?  #1 It’s in a library. #2 No one is paying too close attention to this plant or it would never have gotten this bad. (How could the custodian not feel the stickiness of the floor?!) #3 Because it is a public building, they can’t really spray anything. I’m not sure they would even be able to treat the soil. The really weird thing is the same plant less than 20 feet away, is fine, but probably not for long. Even in your home, deciding whether you want to take action or just dump the plant is a personal decision. Some people do not want to spray anything in their homes, even if organic or considered “safe”. 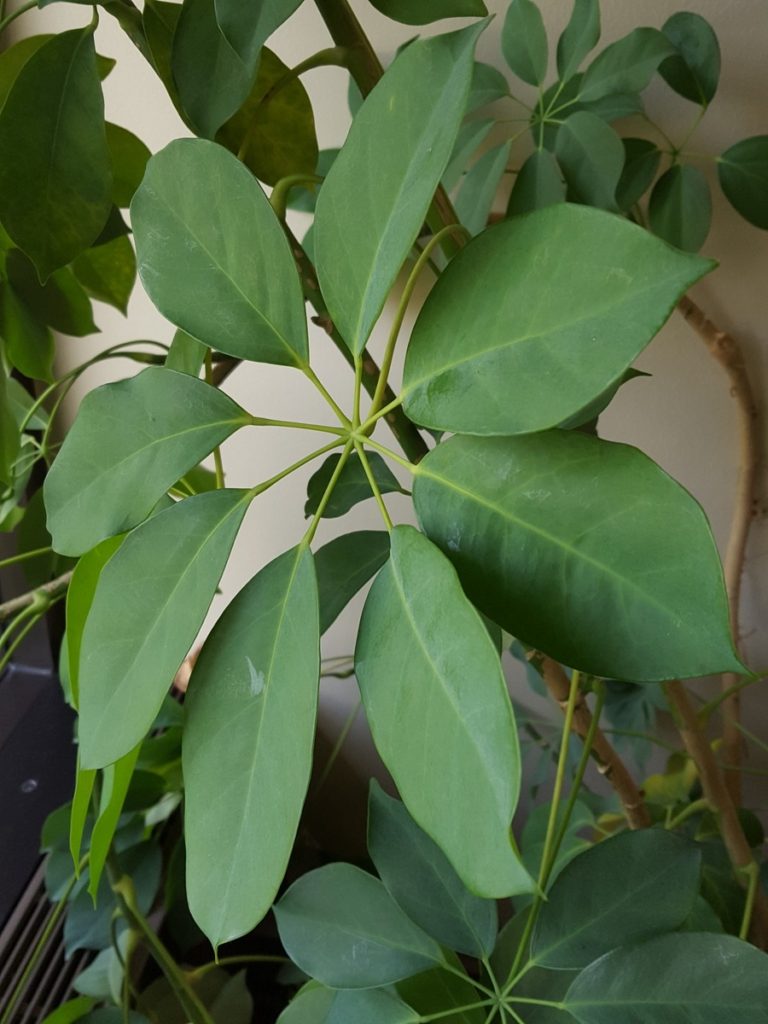 A clean plant less than 20 feet away from the infested plant.

One of the first things you should do if you discover you have insects on your plants is to move them away from your other plants. I can show you what happens when you don’t. Even if you do move them, the plants around them may already have bugs, but they may not be apparent yet. Keep a close eye on plants that have been close to infested plants. Below is a type of bird’s nest fern covered in scale. 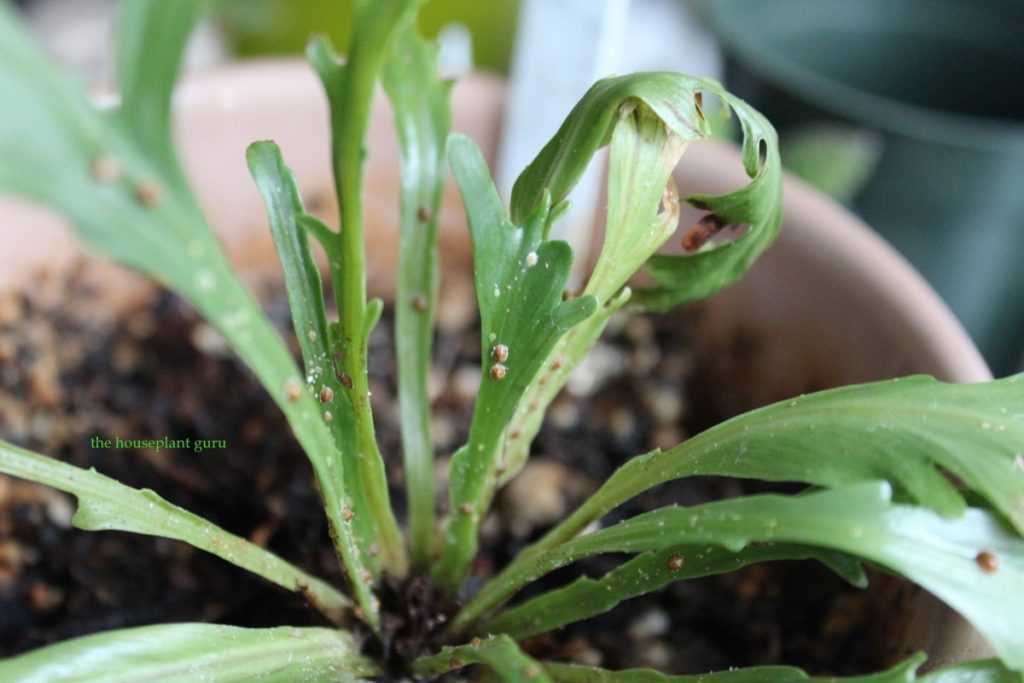 I had this prayer plant below, tucked in among a group of other plants. Thus the reason I didn’t notice the problem right away. I do know it started on a neoregelia bromeliad as I removed that first when I noticed it had this problem. I wasn’t sure what it was but asked an entomologist friend, and she said it was armored scale. And I should have known it wasn’t soft scale or mealybugs, because there is no honeydew, that sticky residue soft scale, mealybugs, and aphids leave behind after sucking the juice from the plants, otherwise known as excrement. 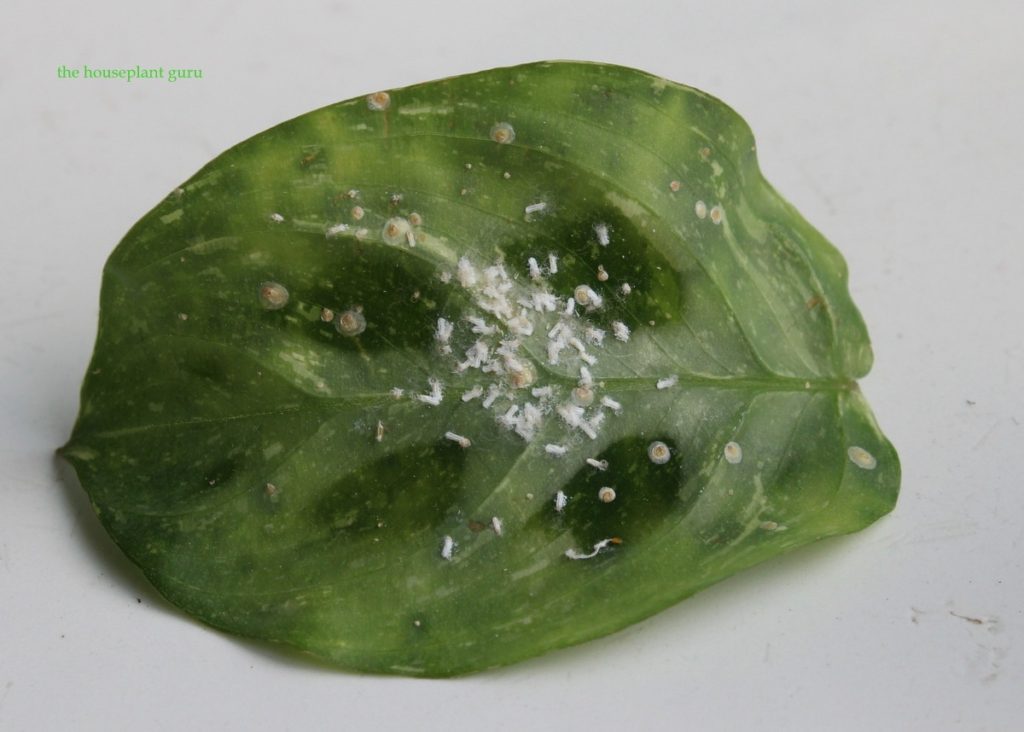 Armored scale on a prayer plant 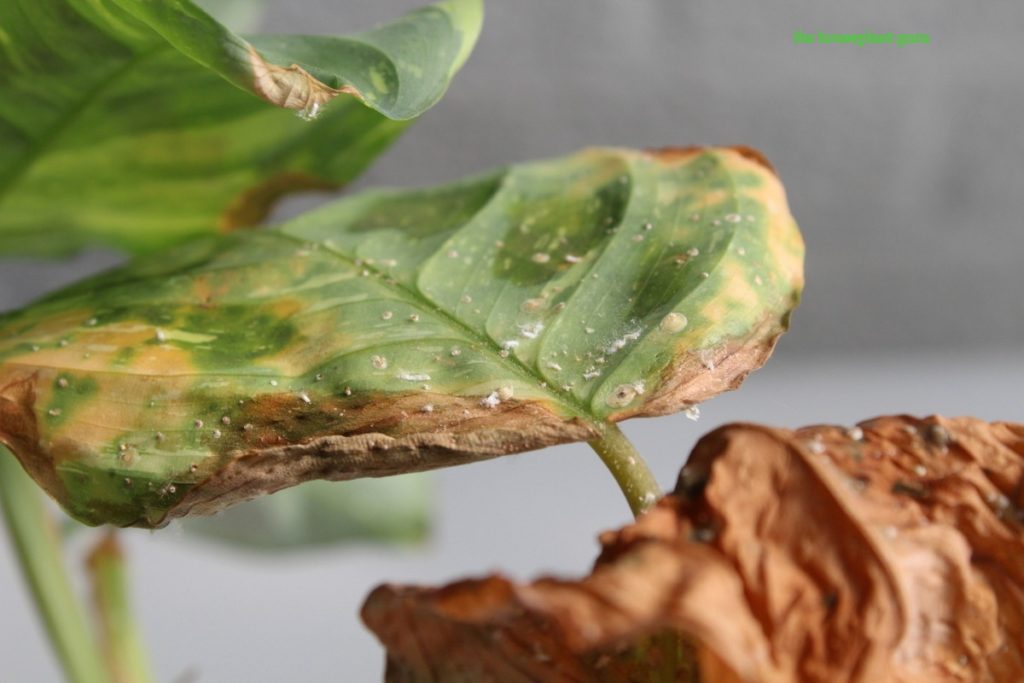 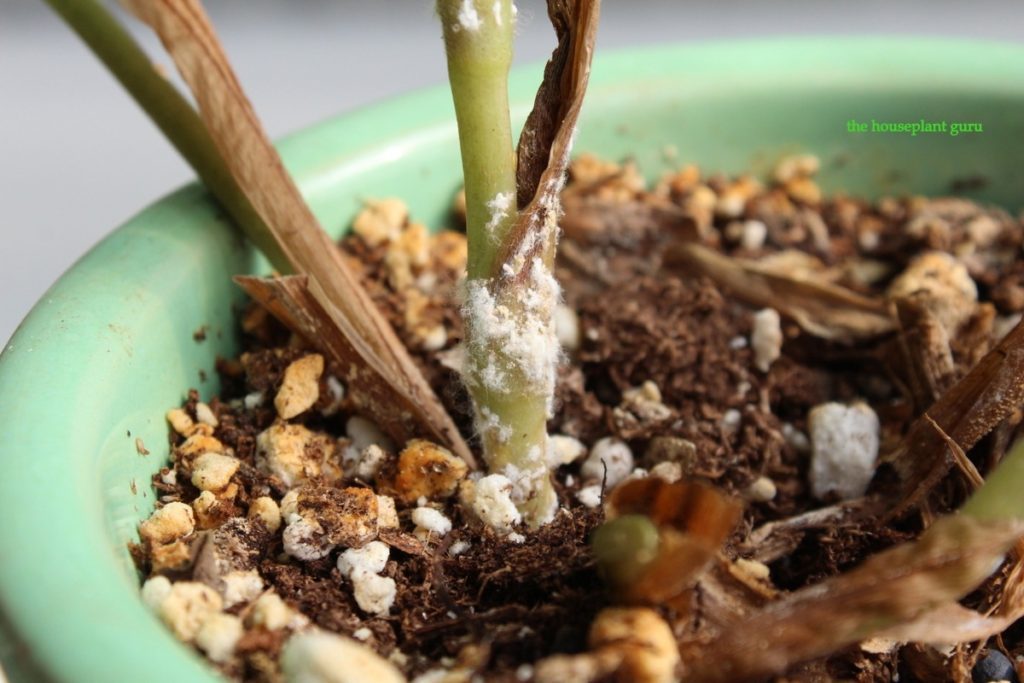 I think you can see how I mistakenly thought this was mealybugs. The fuzzy white stuff certainly look like mealybugs. But again, no honeydew should have been my first clue. I have never had this armored scale. And, I also found out it isn’t easy to get rid of. I threw the neoregelia away, it was so bad. I also threw away this prayer plant.

So, how DO you get rid of the scale? Persistence is key. It may take a few treatments of whatever you use.

If you only have a few insects on your plant, using alcohol and a cotton swab and just wiping them off works well. You just have to keep checking the plant to make sure you get the bugs that may hatch from eggs that are hidden. Neem oil is also a good option. I use a product called Bonide Rose Rx in the ready-to-spray form. It is already mixed and ready to spray on the plants. I’ve also just received a sample of Azasol which contains a high percentage of azadirachtin, which is derived from the seeds of the neem tree, so it is stronger than regular neem oil. I will report on its effectiveness later. There are also systemic insecticides that work against these hard-to-control insects. These can be sprayed on the plants, but applying it to the soil and watering it in works better. It moves through the plant, making the entire plant poisonous and when the insects eat the plant, they die. This should be used carefully around children and pets who may also chew on your plants.

Remember, if your plant seems to be struggling or looks less than stellar, closely inspect your plant for insects or mites. Always identify the problem before taking any action. When identified, definitely take action, even if that is throwing the plant away, if that is what you choose to do to save your other plants. No judgment here.

Have a great week,