Get to Know the Ficus Family Members Better 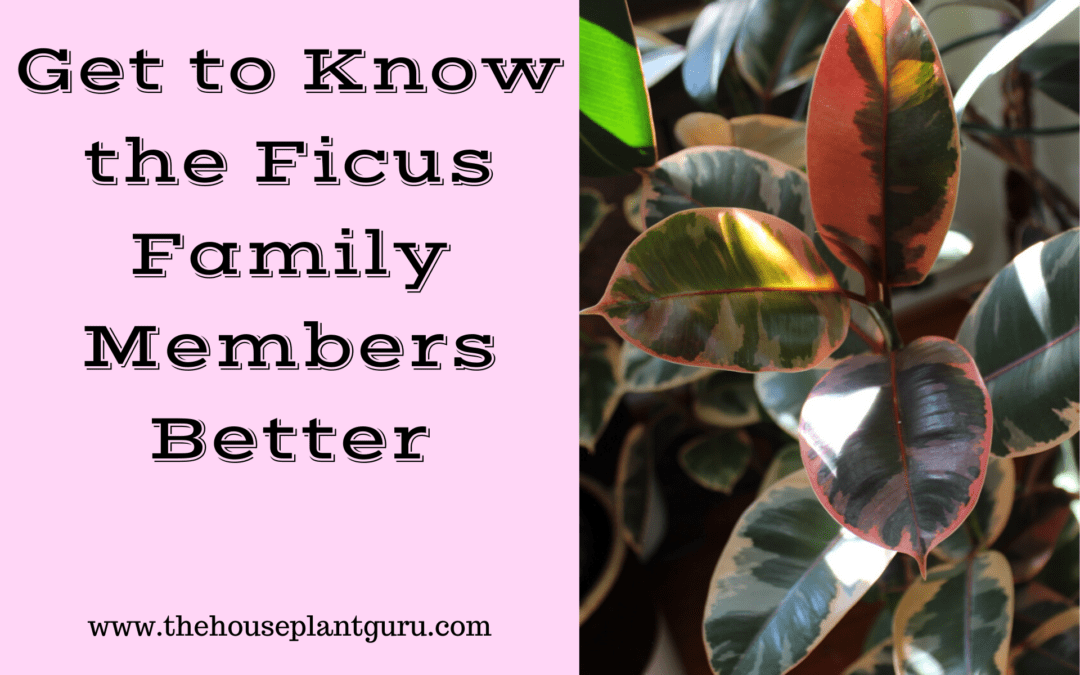 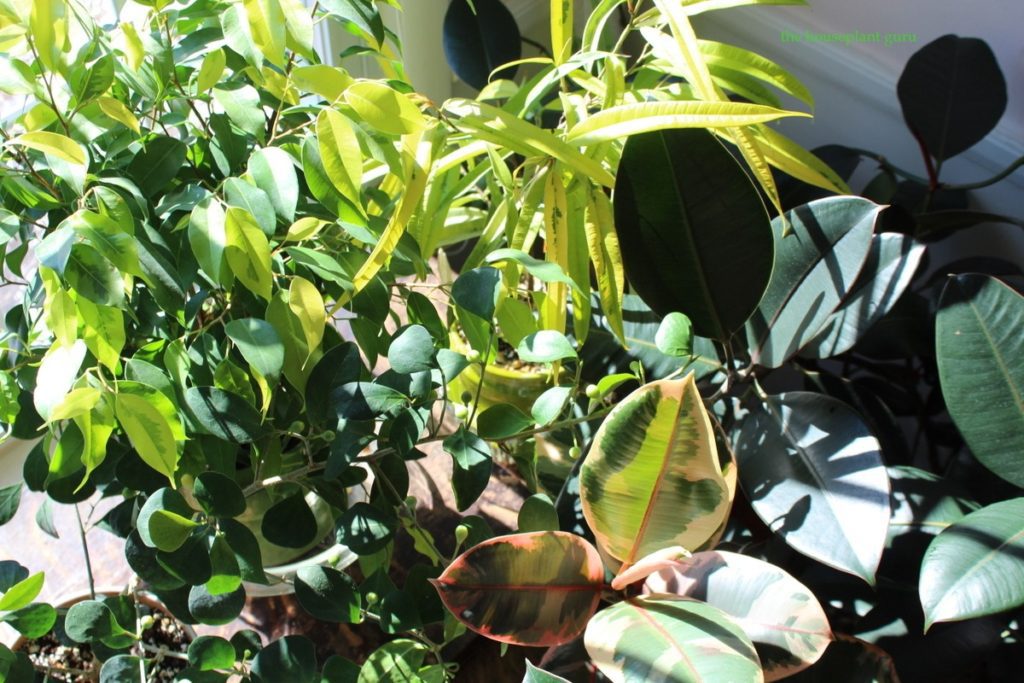 The ficus or fig family is a large and diverse family. I never realized how many different ones I had until I started writing this blog post. In the picture above there are 5 different ficus and I have 6 more that aren’t in the picture. The members of the family range from tiny creeping vines to trees with some of the largest canopies in the world.

The plant below is one of my favorites. I love the variegation with the pink veins and it truly stands out when the sun shines through the leaves. It is the Ficus elastica ‘Tineke’. 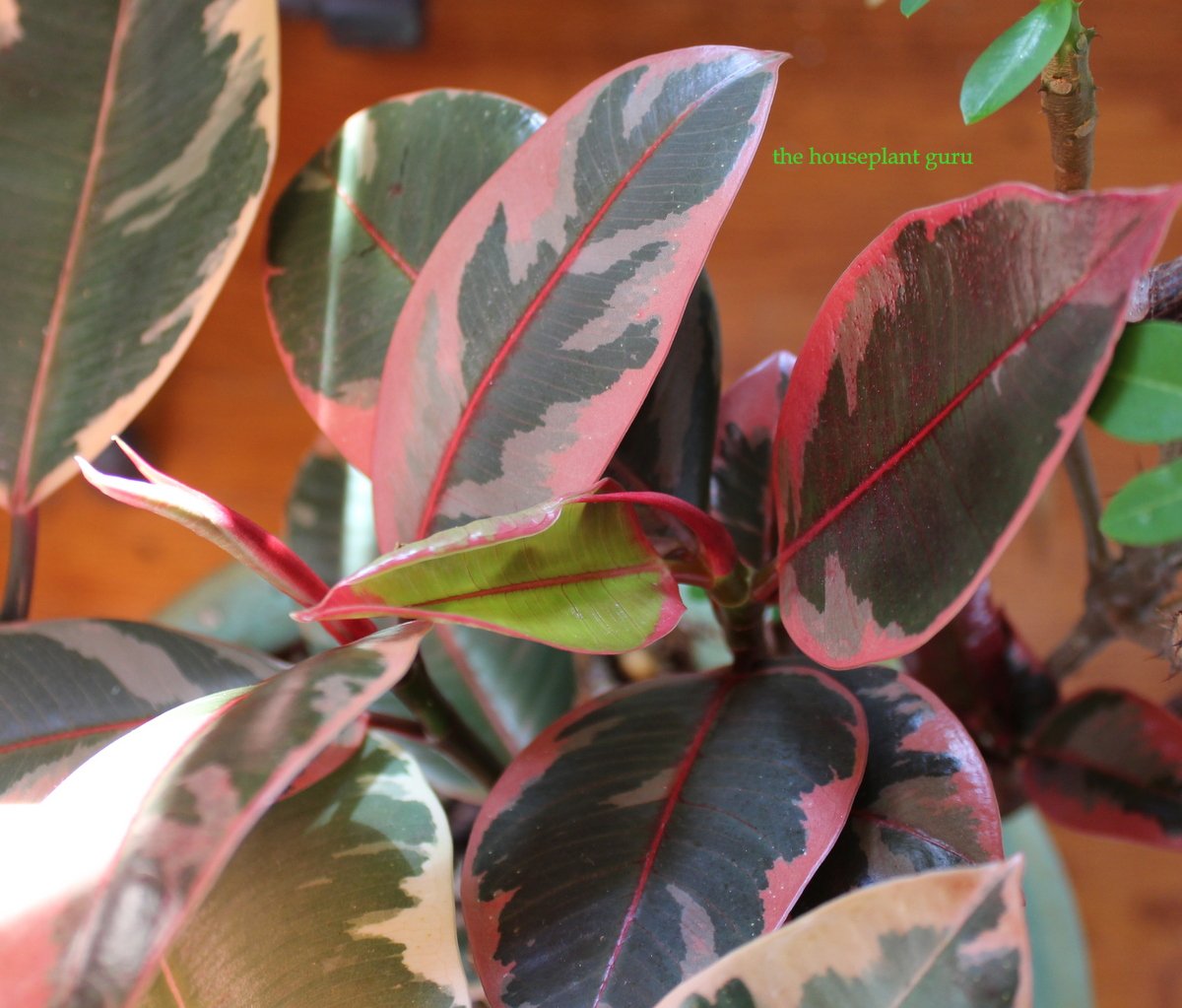 Here is the burgundy form of the plant above. 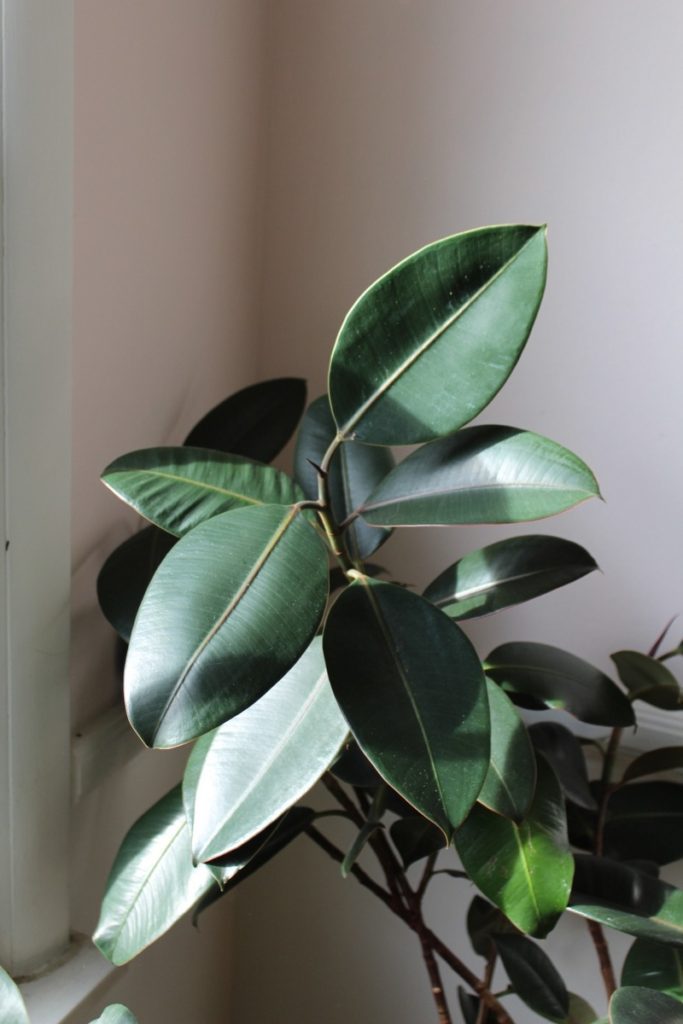 I love the two variegated forms below. 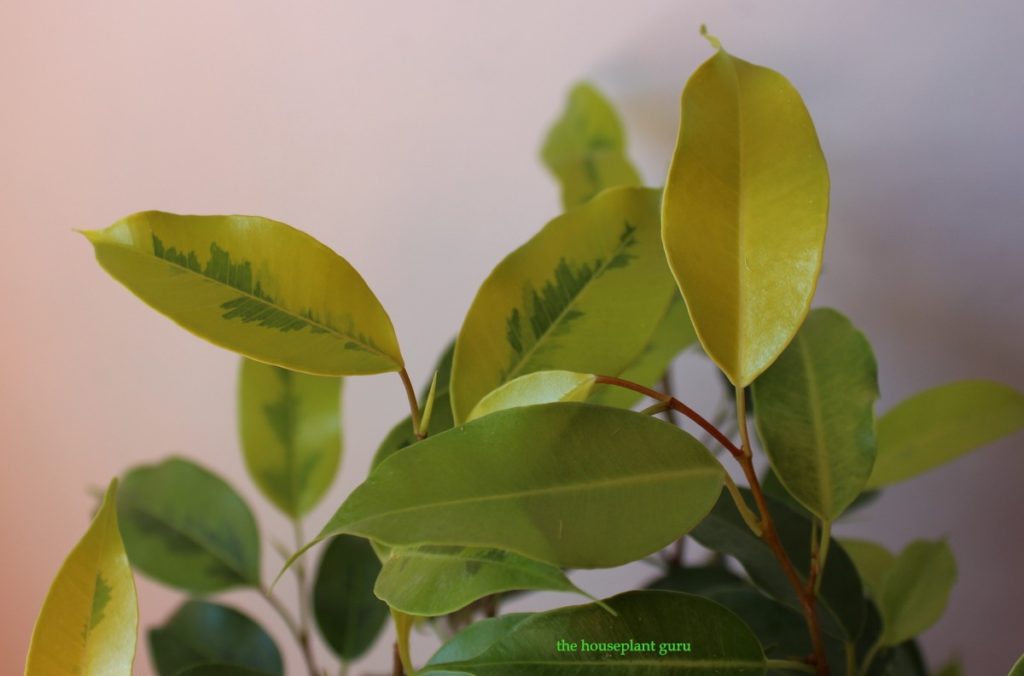 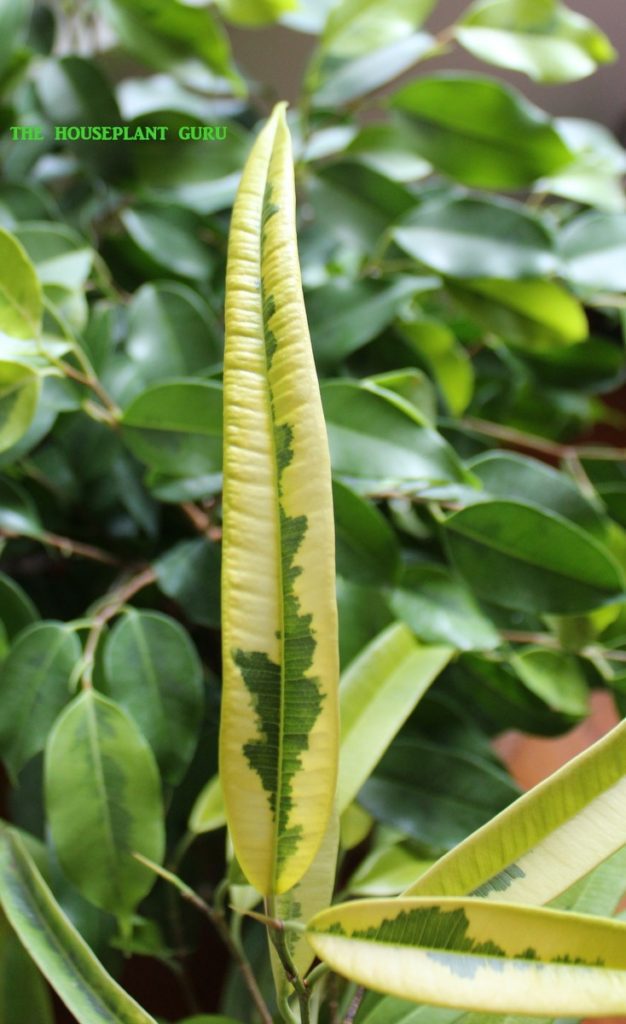 The small oak leaved ficus below is very small and is a perfect ground cover for a terrarium. Each leaf is approximately 1/4″ wide. It has very thin leaves and dries out quickly, so it is best not to let it dry out. More common is the regular Ficus pumila and the variegated one called ‘Snowflake’. Here in the north they are houseplants but in warmer climates such as Florida and California, they are used to cover walls, softening hard surfaces. 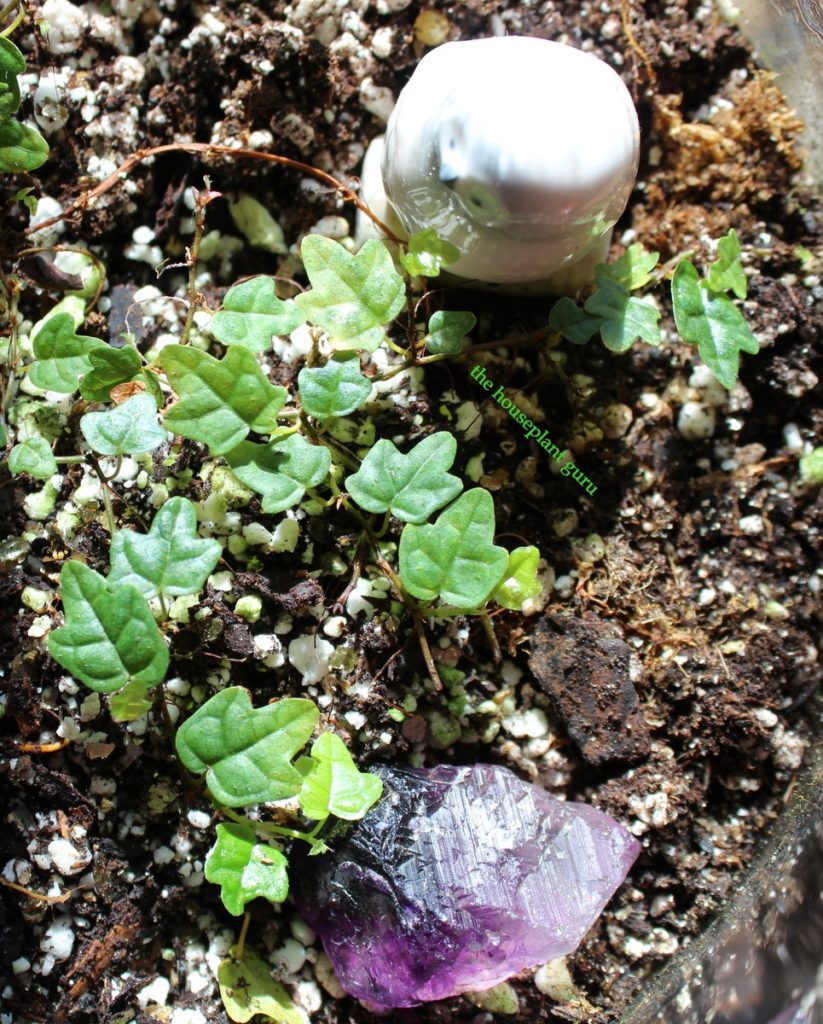 The mistletoe fig or Ficus deltoidea is so named for the white fruit it forms which resemble those of the mistletoe. I like the unusual shaped (deltoid) or triangular leaves. I noticed white dots on them and have discovered they are called hydathodes and are like pores. I only found one mention of those, so I’m not exactly sure about them and their purpose. They are said to have water seep out of them which is called guttation. Some may mistake them for scale, but they are all over the leaves in a pattern that would not occur if it were scale. 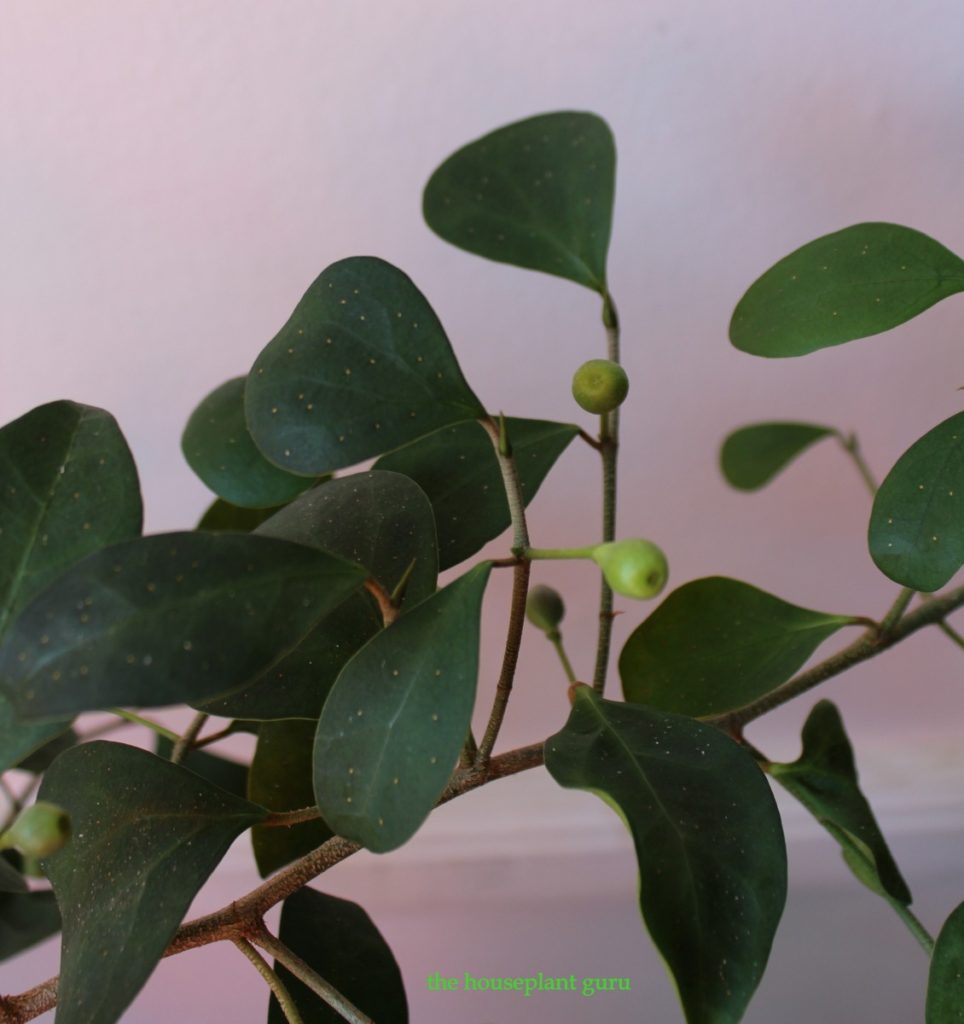 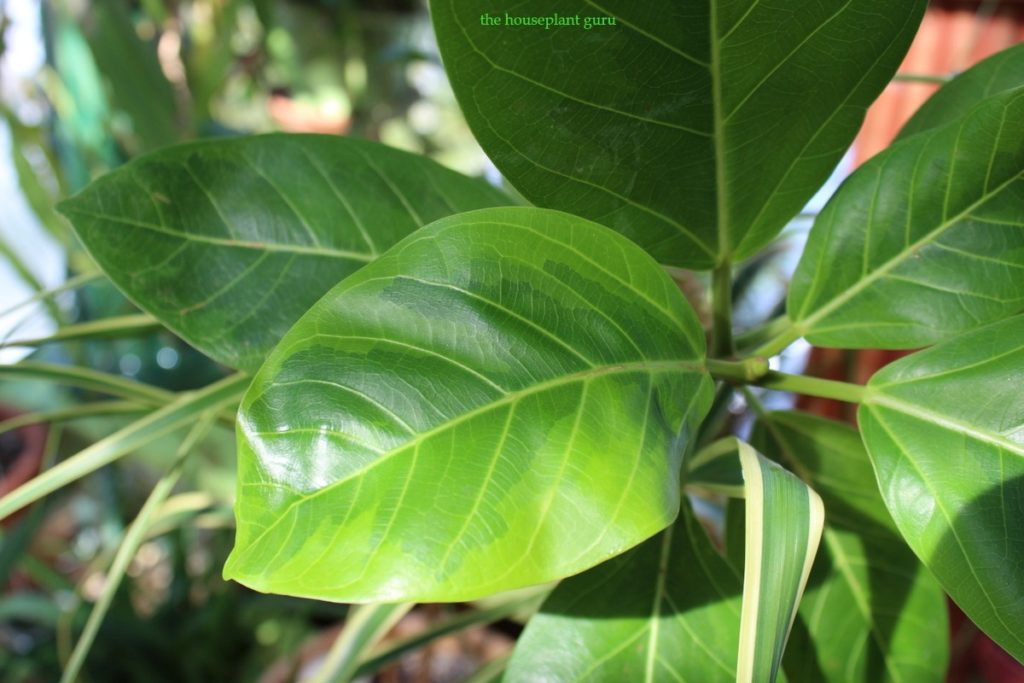 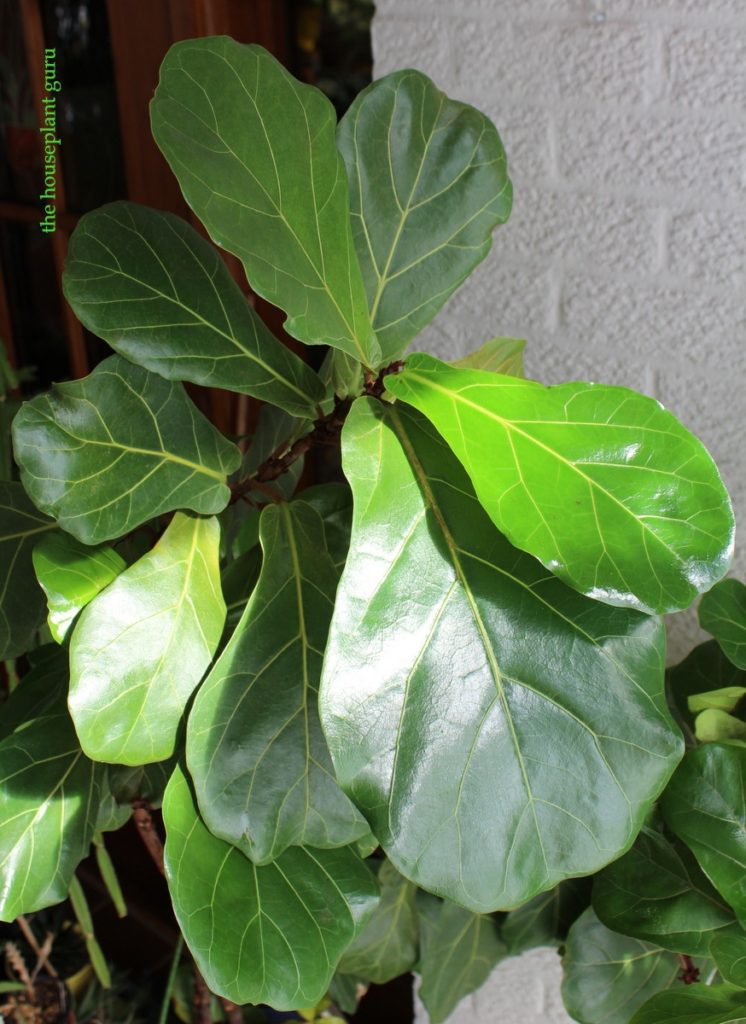 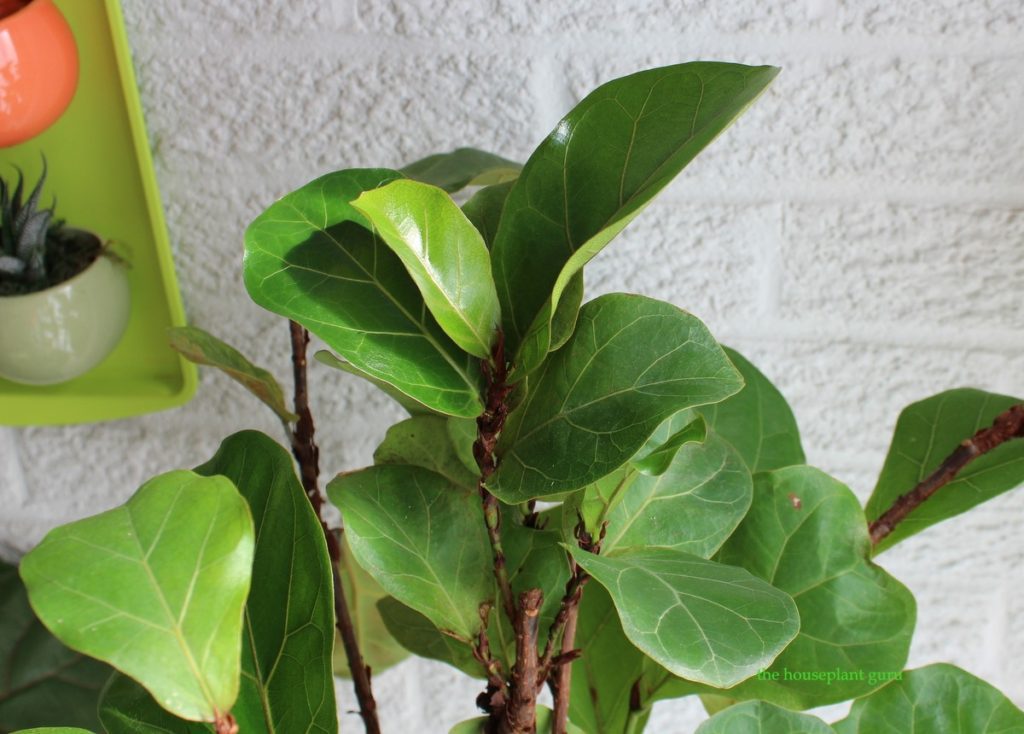 The willow leaf fig below is not mine. I did buy a bonsai plant like this, but I let it dry out a little too much and it dropped a few leaves so it wasn’t photo-ready. These plants are great for bonsai as they have small leaves and the trunks can become quite picturesque, as you can see. I can only hope mine looks that amazing someday. 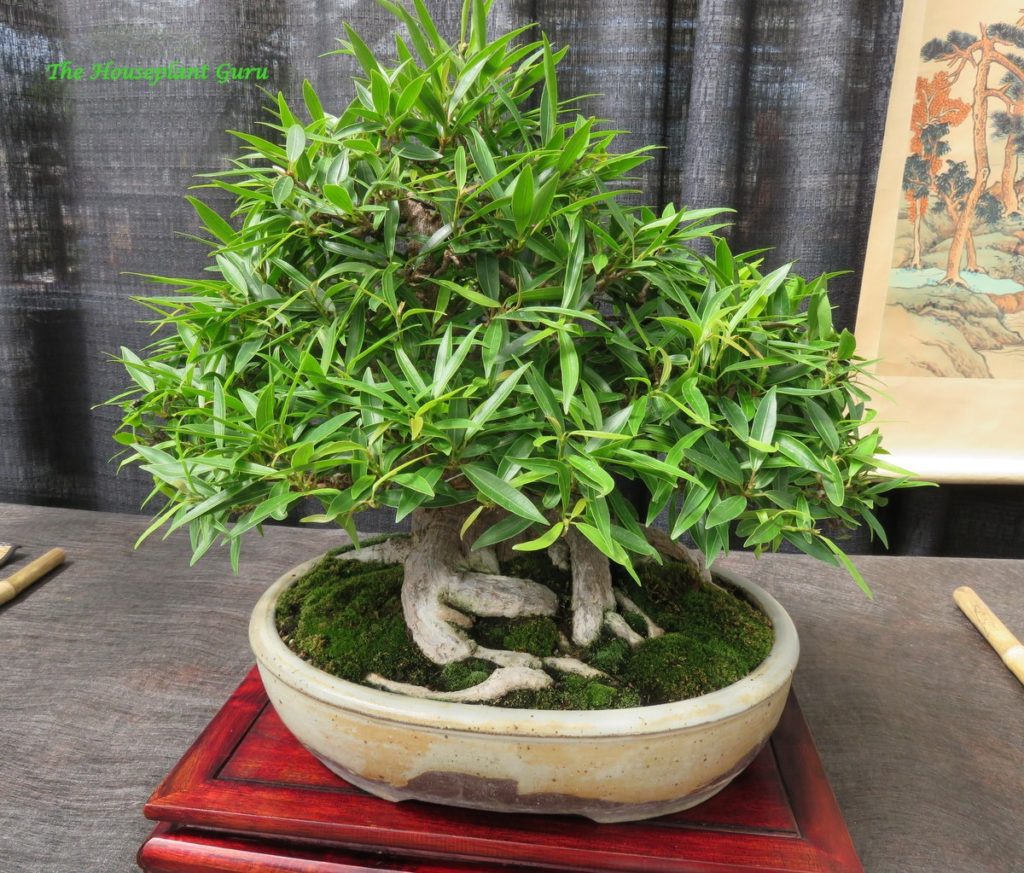 The ficus below is in a terrarium and hasn’t grown much since I bought it. I’m not sure if it will stay small or if it is just a seedling of the willow leaf fig. 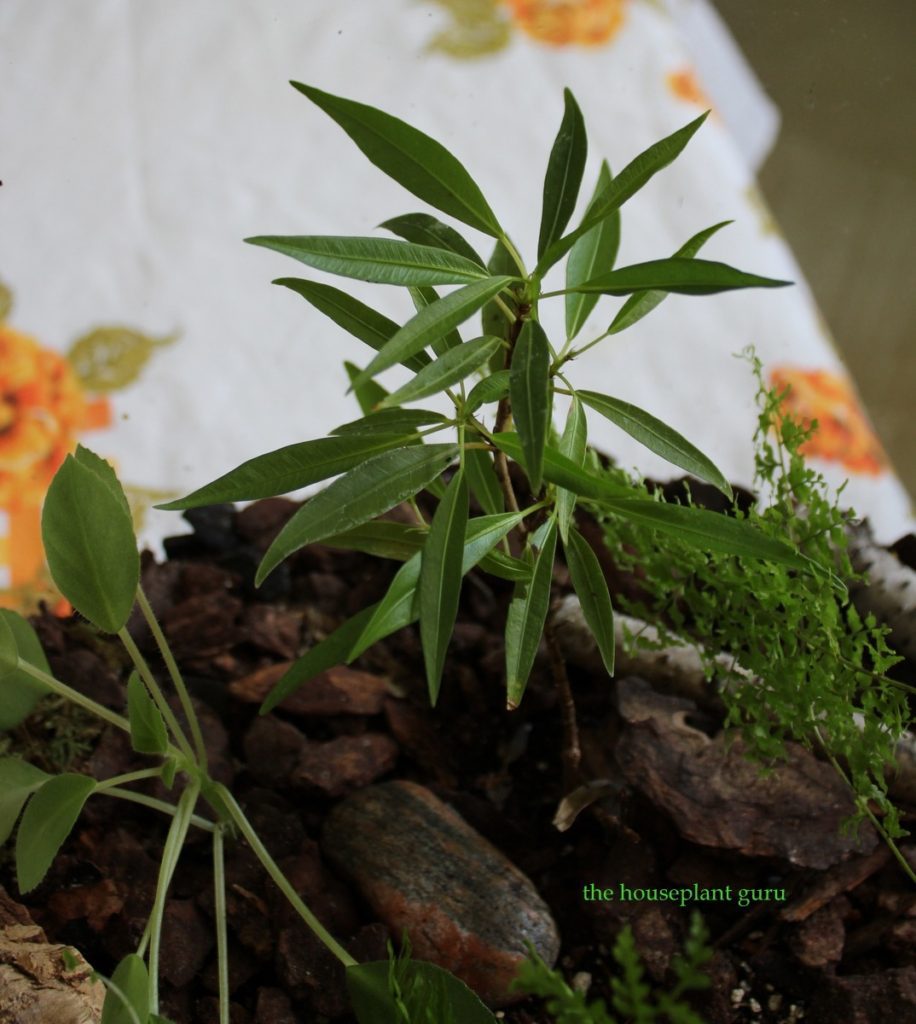 The plant below is at Matthaei Botanical Garden. I do have one, but it doesn’t look like this, so we’ll use this picture. The rock fig is one of the figs that may start its life out as an epiphyte that has been deposited into a tree or in a rock crevice, usually by a bird. It begins to grow and it sends roots down to find water and nutrients. These roots can cover the object it is growing on and in the case of the strangler fig, may kill it. Where the rock fig is from it is usually found covering rocks. 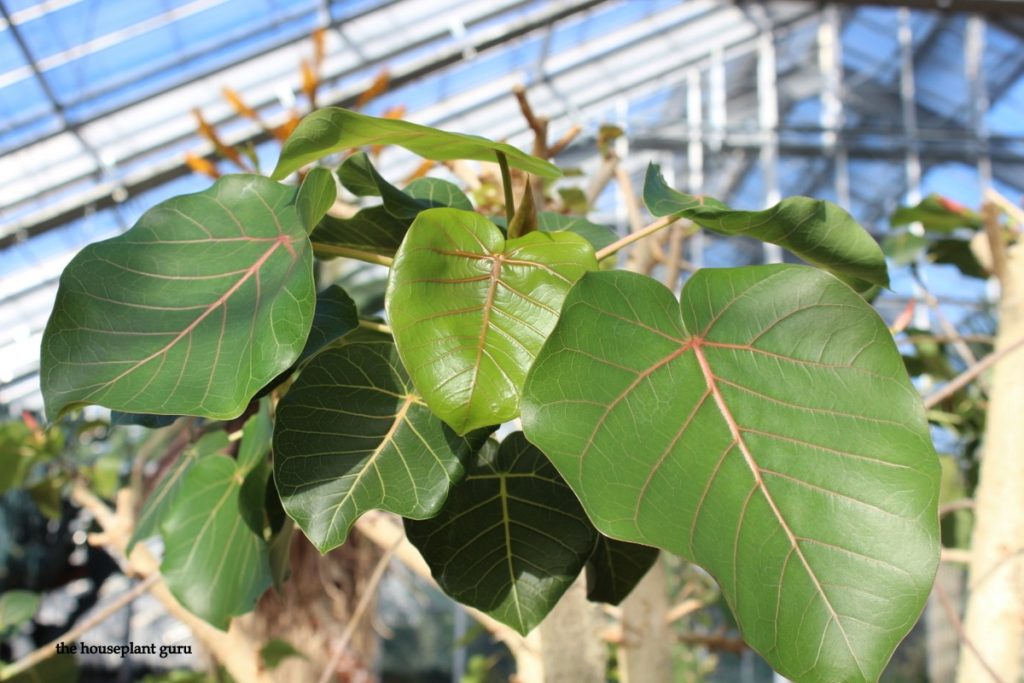 I also discovered that the new leaves of the ficus family are covered by two sheaths called stipules. Yet, the rubber tree, Ficus elastica only has one. Notice the two light pink stipules in the picture below The new emerging leaf has come out of them. 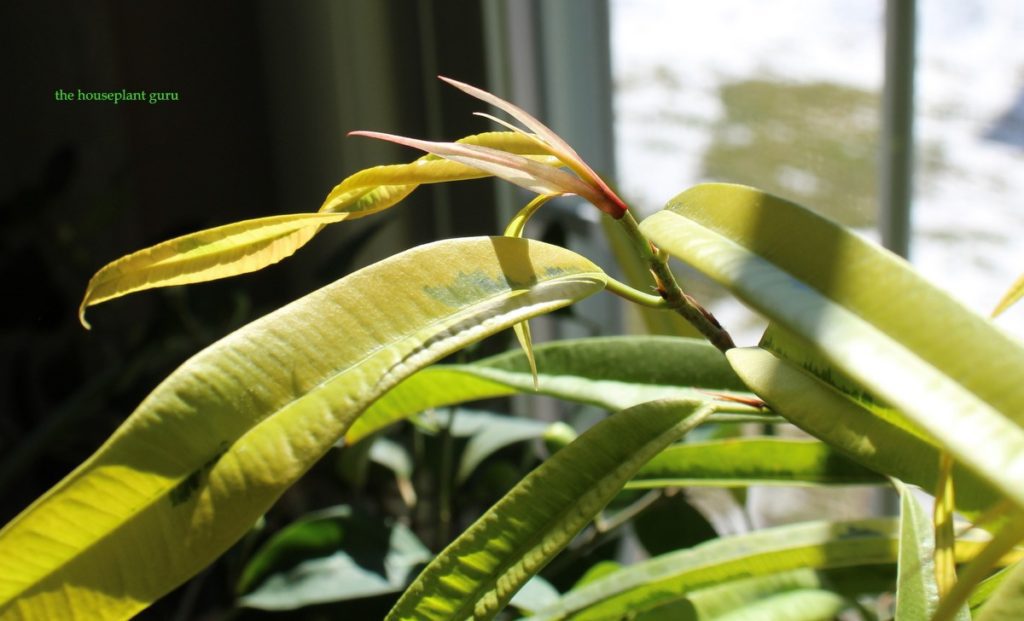 The three pictures below are of the new growth which includes the stipules. As you can see the burgundy ficus is already starting to unfurl. The stipules dry out and usually fall off. Some are persistent and may need to be removed for the plant to look its best. 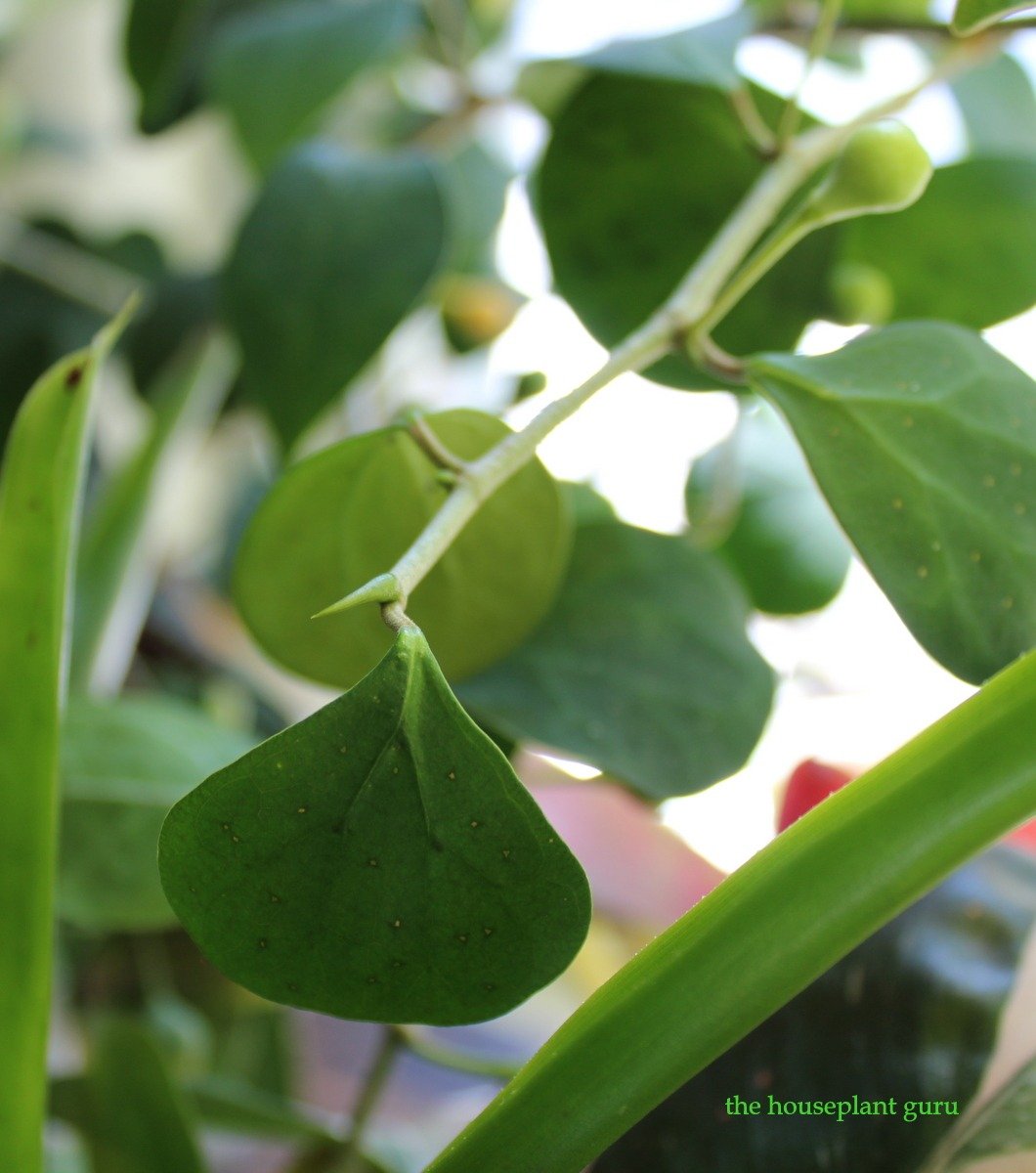 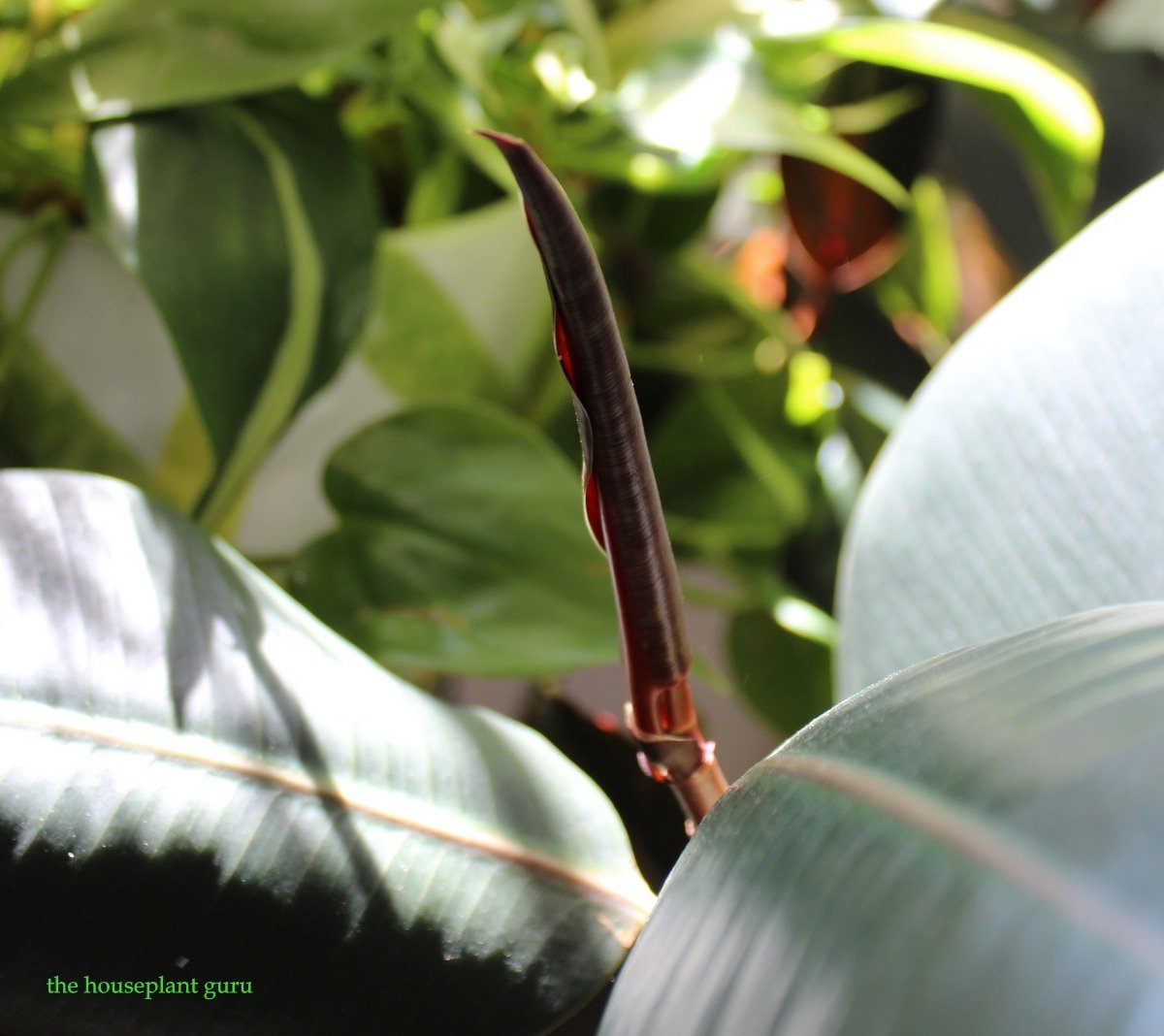 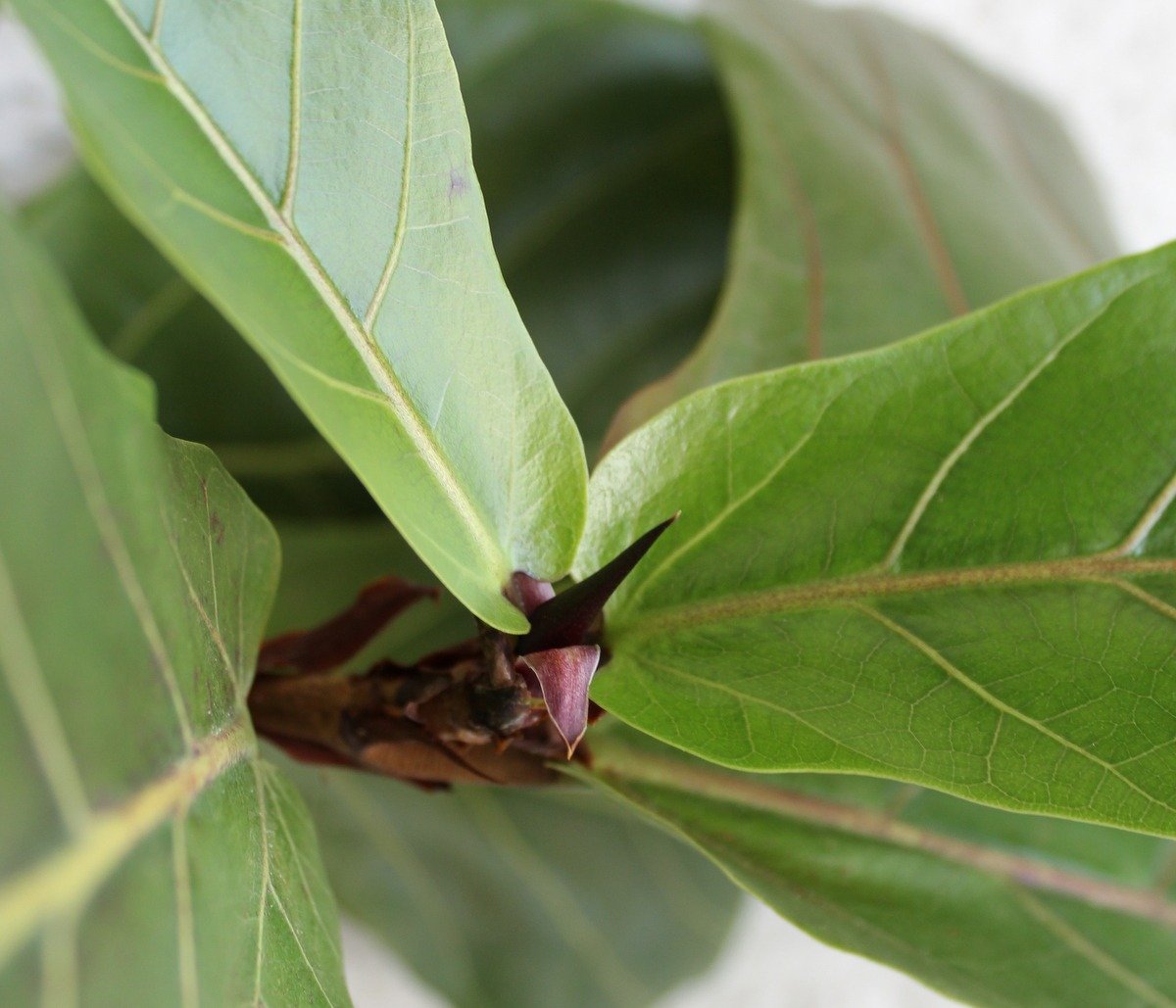 The variegated rubber tree below is unfurling a new leaf and the single pink stipule is on the right. 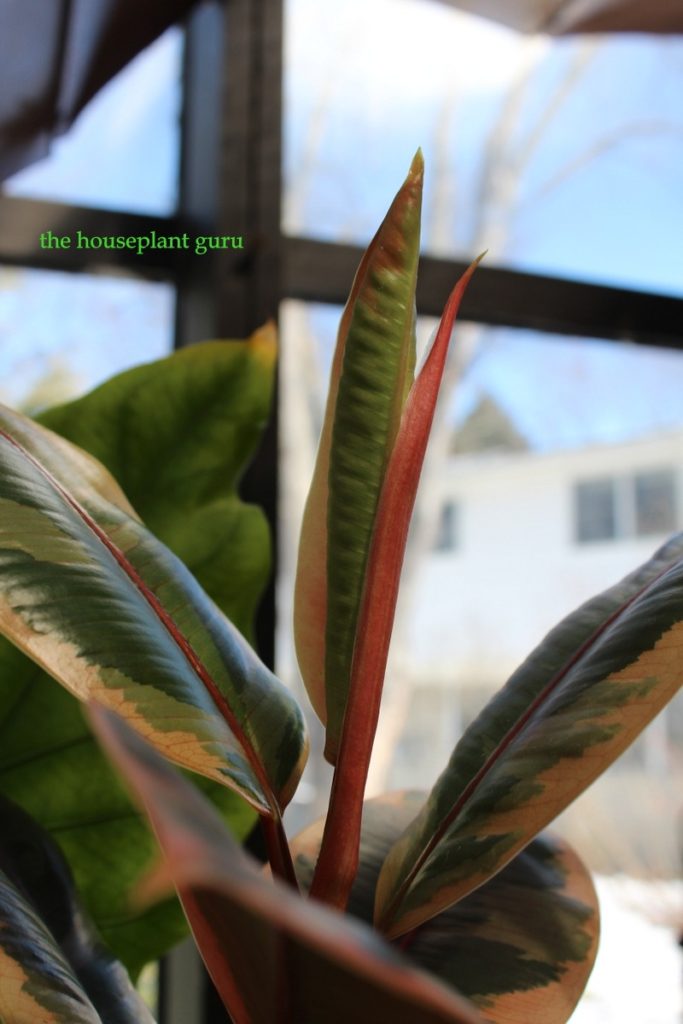 If your ficus needs to be trimmed, be aware that the white sap that comes out contains latex, as some people have latex allergies. It will drip on your floors or get on your clothes, so be careful and wipe it up quickly. Make sure you don’t get any in your eyes.

As you can see, the ficus family is one that has some beautiful plants and it is hard to believe some are related to the others. They are easy to care for. Take cues from the type of leaves they have when it comes to watering. The thin leaved varieties will need more water and humidity whereas the more succulent leaved plants like the rubber tree and mistletoe fig will need less water and humidity. Just don’t let them completely dry out. The Ficus benjamina or weeping fig is known for its habit of dropping leaves whenever it’s moved and may do that when only moved across the room. Some of the other varieties aren’t so finicky and as you can see, you have lots to choose from.

Do you have any of the ficus family members? Let me know in the comments.