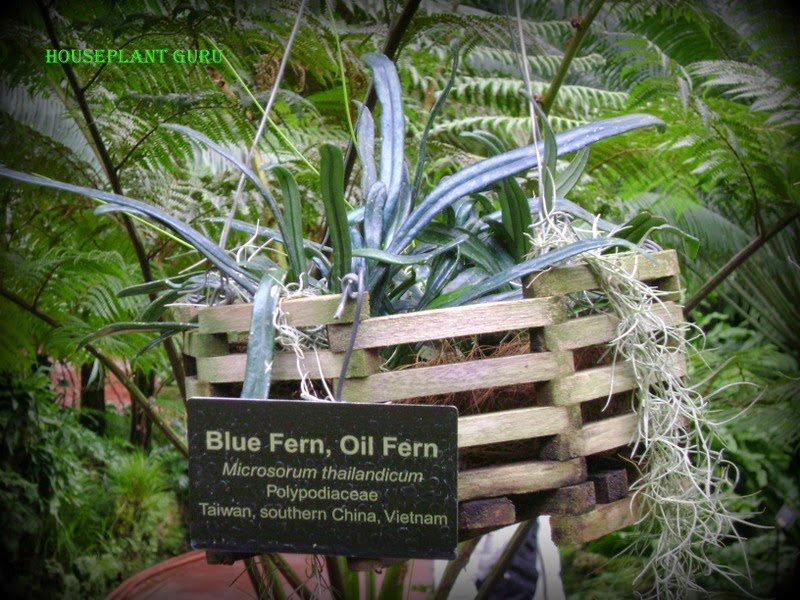 My one and only resolution this year (if you don’t count the one I make every year to lose weight….) is to go through my many pictures and pick plants out from conservatories not neccesarily considered “houseplants” per say, and learn a little more about them. Of course, there aren’t any real “house” plants by nature, but we’ve made them such. These plants are usually found in a number of conservatories, so why not find out more about these plants. I’m always up for learning more about houseplants. So, lets get started…
The first plant I chose is the blue fern or oil fern, Microsorum thailandicum (previously Microsorum steerii). It is also called blue strap, scarab and cobalt fern. These names all come from the unusual color of the fern. It has a blue iridescent color, thus the name oil fern. It reminds me of oil on water. Or a scarab beetle’s shell. (Did you know that those nasty June bugs and Japanese beetles are types of scarab beetles? I was thinking more along the lines of those scarab beetles that are very colorful from the tropics.)

This fern is native to Thailand (thus the species name), Taiwan, Vietnam, and Southern China, as seen on the tag above. The plant grows a couple of different ways; as an epiphyte on another plant, or as a lythophyte (which in Greek, means ‘lover of stone’), on limestone. It grows in the understory, so takes low light and to keep the intense blue color,  needs very high humidity. It is a slow growing fern with 10-18″ fronds common in SE Asia.  In the past, it has been hard to find to purchase, but I found it for sale on a terrarium/vivarium site. I have not purchased one, but good to know if I ever decide to. It would be perfect for a terrarium.
So, here is the first installment in my New’s Year resolution. Hopefully you will join me on this journey through some conservatories learning about some interesting, not-so-common plants.