The Antlers on My Walls 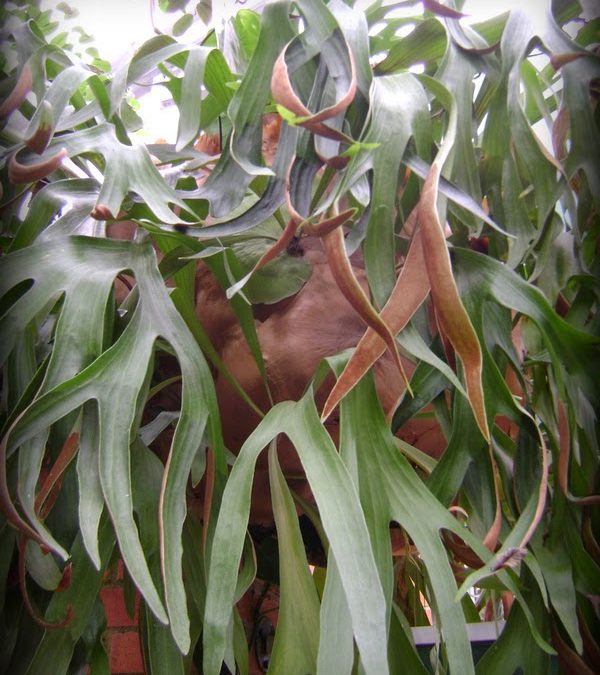 Every Thanksgiving, we make the trek up North to mid Michigan to Mom’s house for the holiday. This is, of course, during hunting season. Why does that matter, you ask? Well, its not bad getting there, but quite often on the way home, it isn’t as pleasant. I understand that deer need to be thinned out and for this to happen people shoot them. I don’t want them to starve over the winter. What I hate is the need for the deer to be hauled home on top of vehicles for all the world to see. It is disgusting and sad. I think maybe they want to show off their trophies. And, the bigger the rack (or horns), the better. My brothers and nephews hunt, but the only deer horns I want on my wall are of the staghorn type! Staghorn fern that is!


Platycerium bifurcatum or staghorn fern is one of my favorite plants. Platycerium means ‘broad horn’ in Latin. The ‘antlers’ stand up and cascade and can be very impressive. These plants can grow to enormous proportions. There are many different species of these ferns and I have seen quite a few of these at different botanical gardens I have visited. 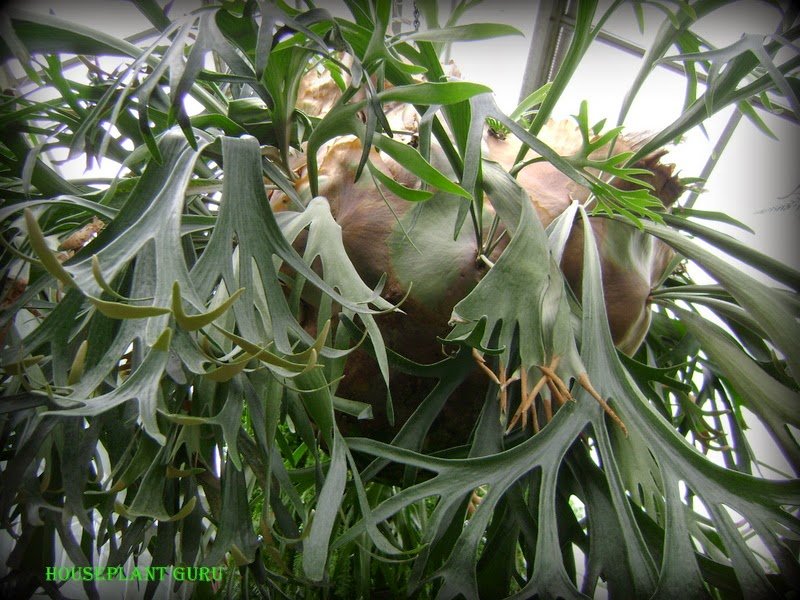 The most common species you will likely encounter is the Platycerium bifurcatum pictured here on the left.

These tropical plants are native to the Philippines, SE Asia, Indonesia, Australia, Madagascar, Africa, and America. They grow naturally as epiphytes on trees in the jungles. They are dimorphic meaning they sport two kinds of fronds. The first are the basal fronds and are often called ‘sterile’ fronds. They grasp onto the growing surface and usually are brown, starting their life as green, though. They become papery looking and feel that way as well. Their main function is to collect water, fallen leaves, and plant debris. The debris breaks down and releases nutrients to the fern. You can see them in the above picture (the brown part).
The other fronds are called foliar fronds and are the ‘fertile’ fronds. They can be erect or pendant and they produce the spores which are like seeds in that they are the way they reproduce.
The silvery tint of the fronds is produced by numerous stellate (star shaped) trichomes [from Greek (tri khoma) meaning ‘hair’, fine outgrowths or appendages on plants] which are visible only under a microscope.

Platycerium wandae or the Queen Elkhorn fern is the largest growing Platycerium and is from New Guinea. It can be 6-8 feet tall.

Platycerium superbum is also a very large fern and is from Australia.

Platycerium andinum refers to the Andes mountains in South America and there it lives in the dry forests of Peru and Bolivia. The biggest problem with this fern is overwatering. It does not like to be constantly wet. Crown of Angels is the common name.

Staghorns rarely have problems, but occasionally, scale can be a pest on them. These pictures were taken at a botanical garden where it is especially hard to control insects, as it is a public place. The best thing to do is pick them off. Ferns are very sensitive to sprays, soaps, and oils. 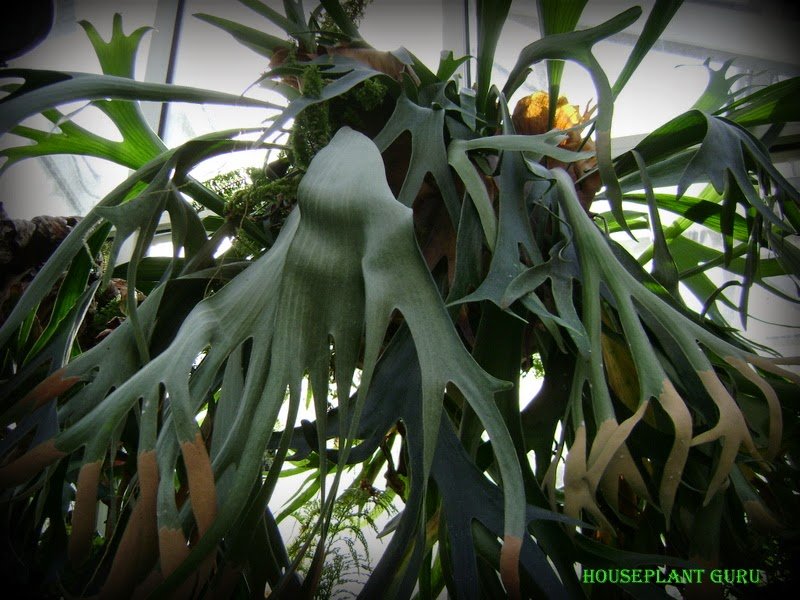 So if you aren’t so keen on having a dead animal with antlers on your wall, try one of these living works of art known as staghorn ferns.